Copenhagen loses Ryanair base, however the ULCC will be the third largest airline this winter; Emirates upgrades to A380 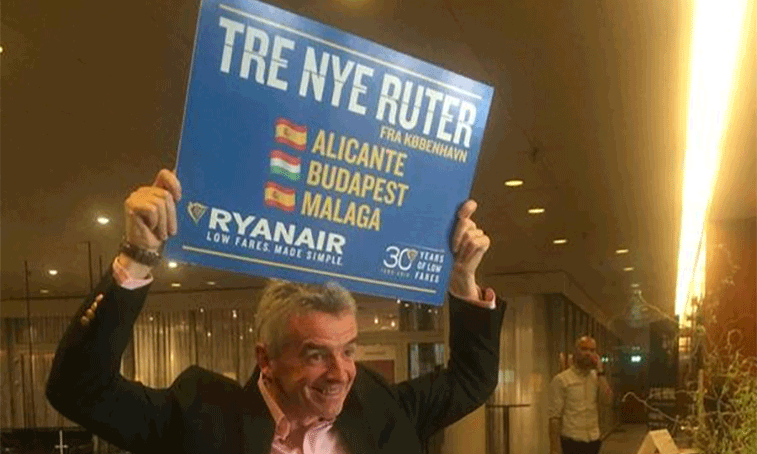 In April, Ryanair CEO Michael O’Leary, announced a further three routes that would be added from Copenhagen for the start of W15/16. Services to Alicante (four times weekly), Budapest (daily) and Malaga (thrice-weekly) will start in October. This winter, the ULCC will operate to a total of 14 destinations from Denmark’s capital.

Copenhagen is a wonderful city, and one that anna.aero’s data elves just love to visit, especially as Denmark’s capital is home to 15 Michelin-starred restaurants (we just love food… especially cake). However it does not just have food, but a wealth of history that dates back nine centuries. As well as food, one of the highlights of the city is Rosenborg Slot, a 17th century castle built by King Christian IV. With so much to see, do and eat in the city, it’s no surprise that for the first three months of 2015, Copenhagen recorded a 10% growth in visitors, including a rise of 29% in Chinese tourists (according to the tourism company Visit Copenhagen). Of these visitors, a majority would have flown to the city’s airport, which showed a 1.7% rise in passenger numbers for the same corresponding period. 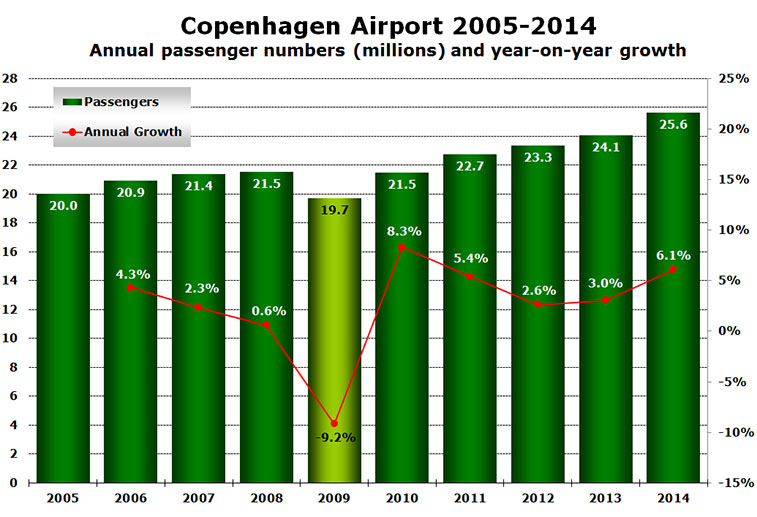 Copenhagen Airport handles 5.6 million more passengers a year than what it did in 2005. Of the 10 years analysed, only 2009 witnessed Copenhagen drop below the 20 million passenger level, a result of the global financial crisis that witnessed strong decreases in air travel at the time. 2014 recorded the second largest growth at the airport since 2005, with passenger numbers increasing by 6.1%. 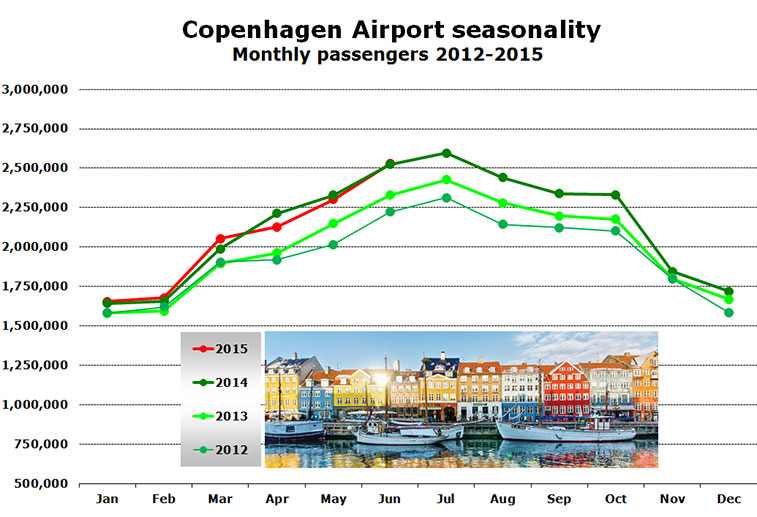 The largest hub in Scandinavia

In 2014, Copenhagen Airport was 5.3% larger than Oslo Gardermoen, and 12% bigger than Stockholm Arlanda, making it the largest of the three major Scandinavian hubs, all of which have SAS as the #1 carrier and Norwegian #2. To include all hubs in Scandinavia, the Danish capital is shown to be 37% larger than Helsinki Airport according to 2014 airport passenger traffic figures.

Although Copenhagen is the largest of the hubs, when compared to Oslo and Stockholm, it showed to have the worst SVID score of the three. The airport recorded a score of 2.91 (“Good”), which is a very respectable result, however Oslo recorded 2.13 (“Good”), and Stockholm 1.86 (“Excellent”). The result means that Copenhagen is placed 28th out of the 50 airports so far analysed this year, resulting in it being slotted between Seattle-Tacoma (2.80) and Paris Beauvais (3.19).

Although the ULCC has only been operating from the airport for a couple of months, by the time the W15/16 season kicks in, Ryanair will be the third largest airline operating from Copenhagen, resulting in rival easyJet slipping into fourth place. Interestingly the orange LCC is reporting a decrease of -4.4% when compared to the same time period analysed last year, a result possibly of Ryanair entering the market.

This winter both carriers will compete directly on four city pairs, with two of them being on the same airport pair, Edinburgh and London Luton. Although Ryanair will have 41% more seat capacity than easyJet to Luton, Europe’s second largest LCC will have 18% more capacity to London this winter, a result of them operating complementary services to London Gatwick and London Stansted, although the latter will not operate past 2 November according to OAG Schedules Analyser data. London is also the largest market for both airlines from Copenhagen as well as the airport’s number one city pair (when all served airports are added together) which is shown in more detail below. The other destinations where both airlines compete with each other are Milan (Ryanair to Bergamo, easyJet to Malpensa) and Rome (Ryanair to Ciampino, easyJet to Fiumicino). For the upcoming winter season, Ryanair will also serve Alicante, Brussels Charleroi, Budapest, Cologne/Bonn, Dublin, Kaunas, Madrid, Stockholm Skavsta and Tenerife South.

It is well documented that Ryanair has recently moved based 737-800 operations from Copenhagen to Kaunas in Lithuania as a result of disputes between Danish unions and the airline. However, the airport is seeing only positive growth from the carrier. When anna.aero asked about the airport’s views on the Ryanair situation with Denmark, Ole Wieth Christensen, Director of Route Development & Airline Sales, said: “They might have dropped their bases in Copenhagen and Billund, and Billund might end up losing Ryanair traffic in the short run, but in sheer number of passengers alone we seem to benefit from their base exit.” 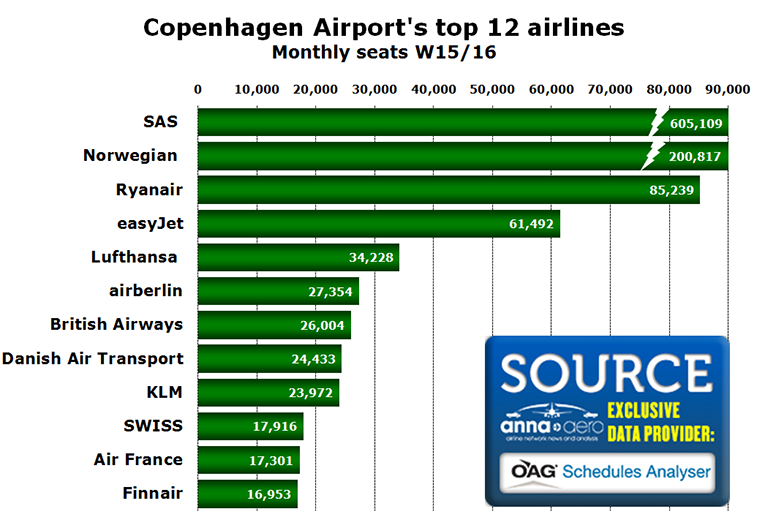 SAS remains the number one carrier at Copenhagen, showing an increase in seat capacity for the upcoming winter season of 3.8%. As well as Ryanair, another two carriers new to the top 12 airlines for this winter are SWISS and Danish Air Transport, which has added over 10,000 seats a month to its network from Copenhagen this winter, a result of the airline adding services to Karup to complement existing winter operations to Bornholm. The three carriers to leave the top 12 are Turkish Airlines, Widerøe and Austrian Airlines.

Although Ryanair is only one place below Norwegian in the top 12 airlines list, Europe’s third largest LCC is still operating 57% more weekly seats than the number two LCC out of Copenhagen. This winter, Norwegian will operate to 38 destinations, including new services to Las Vegas, San Juan and St. Croix in the US Virgin Islands. Of the airlines available seat capacity this winter, 7.1% will be on long-haul services, including New York JFK, which is showing a rise in seat capacity of 15% when compared to W14/15. When speaking to Copenhagen Airport about possible expansion of Norwegian in the long-haul market, a focus was identified on expanding the US market. Christensen said: “Norwegian’s long-haul operation is mainly focusing more on US expansion at the moment. This is due to traffic rights to certain Asian countries being more challenging to obtain, and secondly we can help support their successful growth out of London Gatwick. Out of Gatwick, many US destinations makes sense because of the larger catchment areas and the close connection between the UK and the US. This means that by Norwegian adding additional direct frequencies from their Copenhagen hub on the same routes it operates from Gatwick, it can maintain at least a daily operation from its European hubs to many US destinations.” 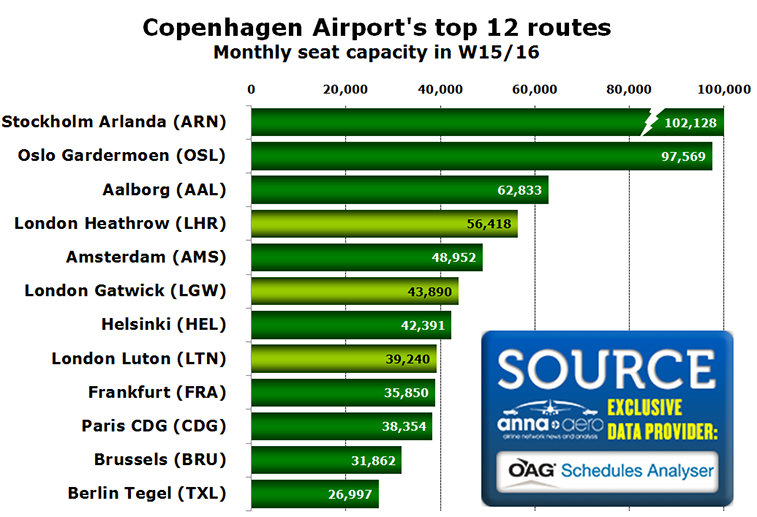 Although services to London Luton have only been operating for a couple of months, when it comes to the W15/16 season it is the eighth biggest route in relation to monthly seat capacity, knocking Bergen out of the top 12. All other routes remain unchanged. In total, three of the top 12 airports from Copenhagen in relation to seat capacity are in London (highlighted in light green). When looking at the breakdown of services to the UK capital in relation to available capacity, easyJet is the number one carrier, occupying 25% of the 139,000 monthly seats for W15/16. SAS come second with 21%, while Norwegian (19%), British Airways (19%) and Ryanair (15%) make up the rest of the market competition.

This September and October, Beijing Capital Airlines will operate a series of charter flights from Hangzhou and Beijing, forecast to carry 3,500 Chinese passengers. Commenting about the charters, Christensen said: “People from Denmark often fly to China with SAS, an airline and a brand that is very well known to them. Chinese people prefer to use a Chinese carrier as they are brands very well known to them. We have now successfully achieved a breakthrough to the Chinese package tour market with this charter programme, and this will hopefully lead to even more business in the future.”

Emirates will introduce A380 from December

On 1 December, Emirates will debut its two-class A380 on services to Copenhagen, the result means an extra 147 daily seats being added to Dubai. The carrier first commenced operations to Denmark’s capital in August 2011. When originally launched, the service did have a first-class service. When anna.aero asked if the airport hoped to see the return of first-class, Christensen replied: “Emirates gave up first-class to Copenhagen after the first year or so, and we have had the high density 777-300 for quite some time now. I think one of the reasons for this was because Denmark is ‘too socially democratic, and first-class is seen as showing off’ for this service.” When asked about possible future expansion by the MEB3 operator, the reply was very positive. “When you look at how the Copenhagen route is performing and how Emirates has increased capacity on almost all other routes in Europe, we hope to see further expansion from them in the future. Firstly though, we look forward to hosting the world premiere of Emirates’ two-class A380.”