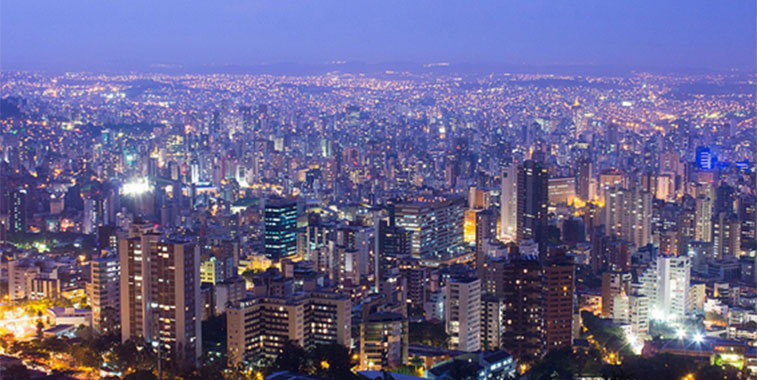 With an average growth rate per month of over 6% so far in 2015, anna.aero expects Belo Horizonte to pass 11 million passengers this year if the trend continues. In November, Azul Airlines will launch its first long-haul route from the airport to Orlando, a route that is planned to operate five times weekly.

Belo Horizonte is Brazil’s sixth largest city, situated 346 kilometres north of Rio de Janeiro. In 2013, the city recorded the fifth largest GDP among the Brazilian municipalities, represented 1.38% of the total wealth produced in Brazil. Along with economic development, the city has also witnessed an explosion in its population, seeing a growth of 9.4% from 2010 to 2014 (figures based on 2010 census data and Brazilian government estimates for 2014). With these two factors, it’s no surprise to see that the city’s main airport, Belo Horizonte Tancredo Neves, has experienced passenger traffic grow by 43% since 2009. 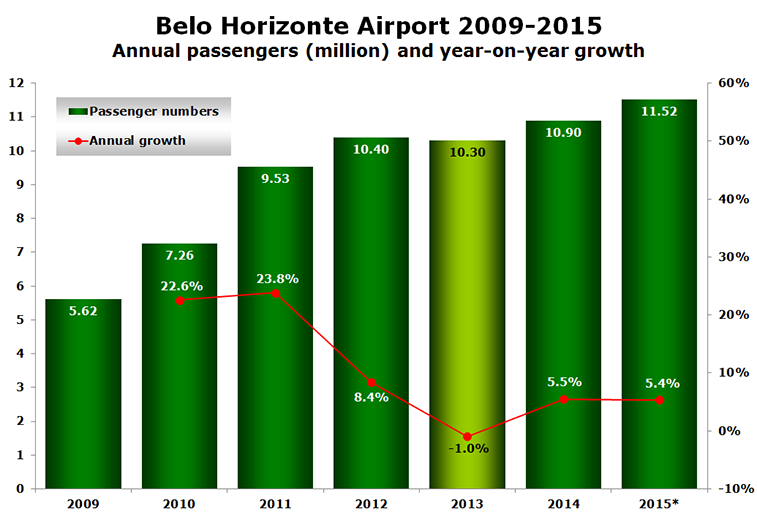 In 2013, Belo Horizonte Airport recorded its first year of passenger traffic decline (highlighted in light green) for some time. The decrease followed an impressive few years for the airport, which recorded an average annual growth of over 17% for the three years previous. However last year the airport returned to form, showing a rise in passenger traffic of 5.5%. So far in 2015, Belo Horizonte Airport is showing an average growth rate of just under 6% per month when compared to 2014. If this rate of increase continues throughout the rest of 2015, anna.aero expects passenger numbers at the facility to reach approximately 11.5 million passengers this year. 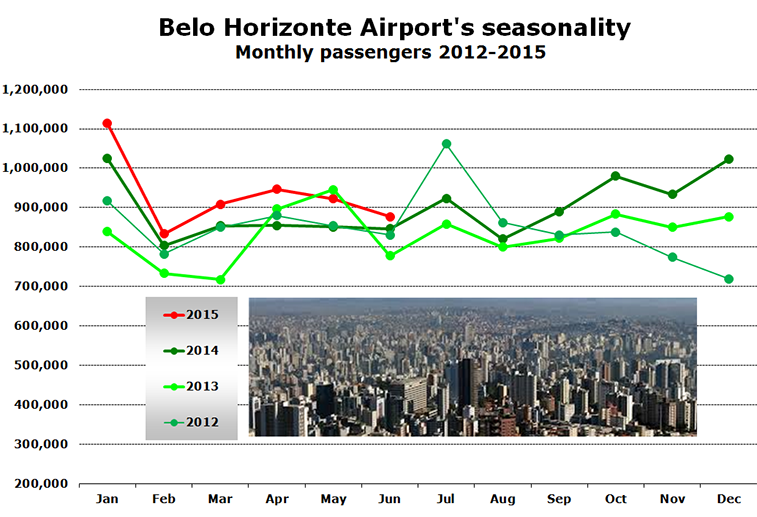 Belo Horizonte Airport recorded a SVID score of 0.79 (“Excellent”), placing it sixth out of the airports analysed so far in 2015 by anna.aero. The result means the airport is situated just behind Chennai Airport in fifth, which scored 0.60 earlier in the year. In comparison for the Brazilian market, Fortaleza Airport, serving Brazil’s fifth largest city, scored 0.88, (also “Excellent”), placing it seventh on the SVID leader board, while Manaus Airport, serving Brazil’s seventh largest city scored 0.47, again (“Excellent”) and results in the airport be placed fourth overall.

2015 is looking to be a good year for Belo Horizonte, with five of the first six months in 2015 being record breaking for the facility. The only month that did not follow this trend was May. Although traffic was up 7.7% when compared to the same corresponding month last year, the figure for 2015 is down -2.6% on the recorded number for May in 2013. 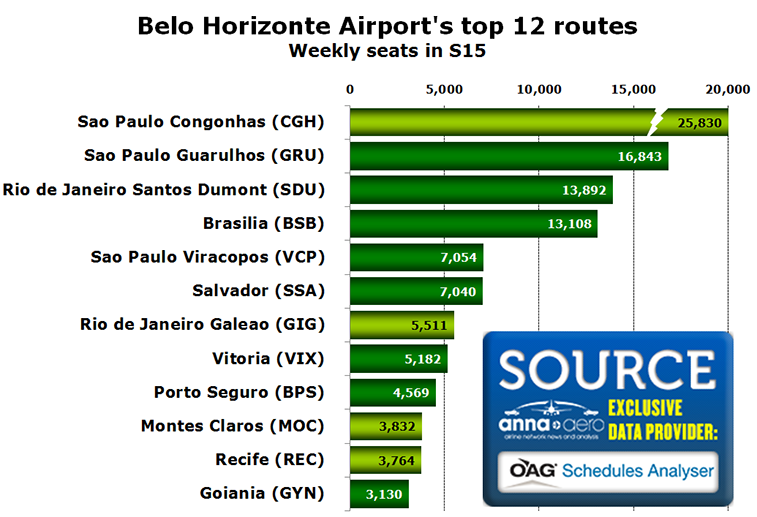 Analysis of OAG Schedules Analyser data has shown that the top 12 routes out of Belo Horizonte have remained constant from 2014 to 2015, however only four of those routes (highlighted in light green) have shown an increase in seat capacity. The most notable increase is on the 359-kilometre sector to Rio de Janeiro Galeao, which has witnessed a seat capacity increase of 37% in S15. The airport pair is served by GOL and TAM Airlines, with the former handling 59% of weekly seats between the two airports, down from the 61% recorded in 2014. Rio de Janeiro Santos Dumont is showing a capacity downfall of -7.9%, an airport also served by GOL and TAM from Belo Horizonte, along with Azul Airlines.

Sao Paulo is the most popular destination from Belo Horizonte, with all three airports in the coastal city being served, and accounting for 36% of weekly seats. Although Sao Paulo is the most popular destination in relation to capacity, only one of the airports served showed a capacity increase for S15, with Guarulhos and Viracopos airports showing decreases in capacity of -1.3% and -12% respectively, whereas Sao Paulo Congonhas’ seat availability is up 13% when compared to the same time period last year. 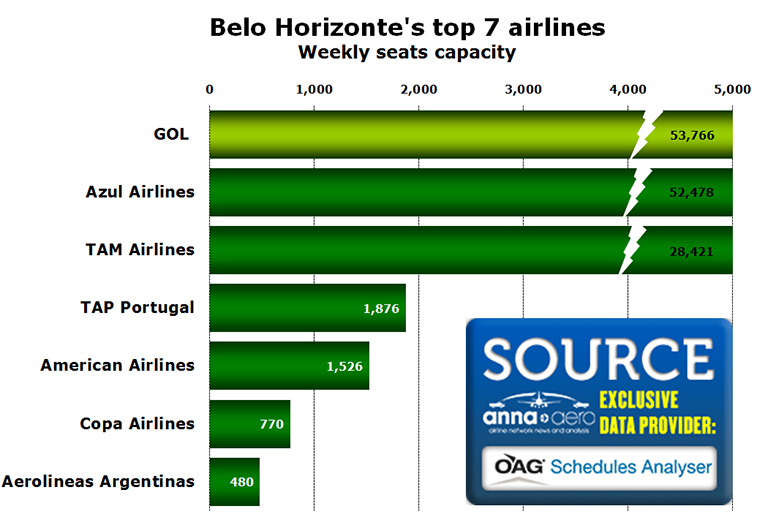 GOL number one, Azul is catching up

While GOL remains the number one carrier at Belo Horizonte, and has introduced its first international service from the airport to Santiago in Chile, the airline is shown to be -4% in weekly seat capacity for S15, while Azul is reporting a 10% rise for the corresponding period. This is as a result of the airline having additional services to Araxa, Cuiaba, Cabo Frio, Ilheus, Maraba, Natal, Valenca and Teixiera de Freitas according to OAG Schedules Analyser data. In November, the carrier will launch a new long-haul service from the airport to Orlando, the first for the airline from Belo Horizonte. The route will operate five times weekly using the carrier’s A330-200s, and compliments current long-haul services from the airport to fellow Floridian airport Miami, operated by American Airlines and TAM Airlines. The airport also has long-haul flights to Lisbon, flown by TAP Portugal.