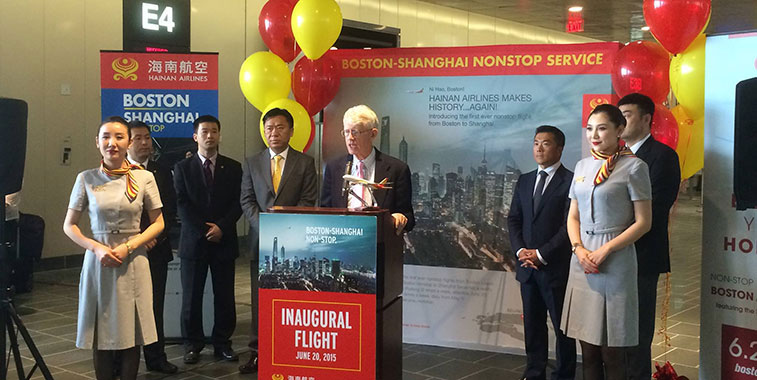 Stealing the category win for Airport With Most New Routes in the 2015 Asian ANNIES from its capital city airport of Beijing was Shanghai Pudong. Hainan Airlines’ launch of services to Boston, which started in June 2015, helped China’s third largest airport to the win.

It might be months until the Oscars or the Grammys, but anna.aero’s very own Asian airport and airline awards – the Asian ANNIES – are here to help fill the summer-long award ceremony void. Yes the time has come for the fifth Asian ANNIES, this year awarded to eight airports and six airlines for their notable route development achievements in the Asian region over the past 12 months.

Our awards are based on science, statistics and evidence rather than people’s opinions (and votes). Using OAG schedule data for 3-9 August 2015 compared to 4-10 August 2014 from across over 1,100 airports and nearly 300 carriers operating in the Asian region, our team of data elves have pored over the figures and we think we have come up with a more transparent way of rewarding airlines and airports that have achieved notable route and traffic related success in the Asian region during the last year. 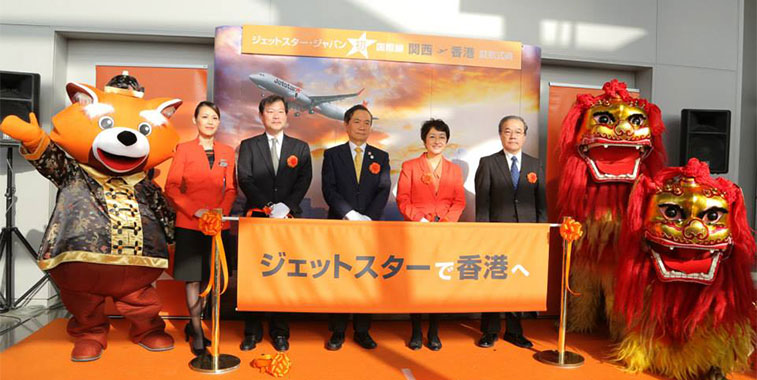 On 28 January this year Jetstar Japan started flights to Hong Kong from Osaka Kansai. This was just one of the new routes which helped the Japanese airport secure it two second place results in the 2015 Asian ANNIES.

China keeps a hold of this title for another year. However, honours this time around go to Shanghai Pudong, which achieved a substantial net gain of 19 additional destinations served over the last 12 months. However, it was a close-run competition, with three airports vying for second place – Chengdu, Kunming and Osaka Kansai ‒ and all of them just one route behind China’s third busiest airport. Contributing to Pudong’s title win were new domestic routes to places like Baotao, new regional services to cities like Bagan in Myanmar, as well as fresh long-haul links to destinations like Boston. 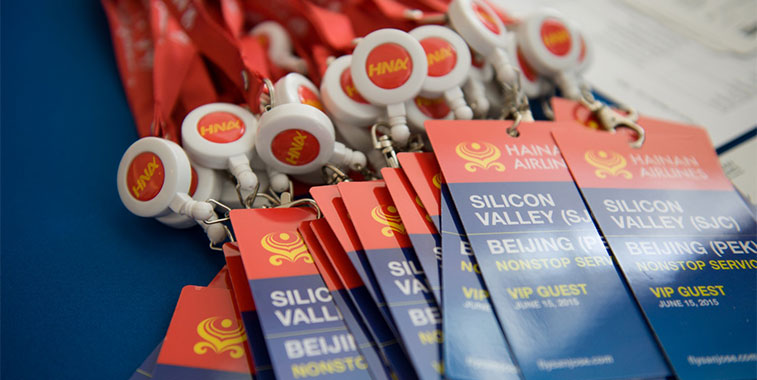 Hainan Airlines helps an ANNIE winner again. Beijing Airport had seven new long-haul services start over the last 12 months, including the Chinese carrier’s new service to San Jose in California, which began on 15 June this year. The airport did also lose two long-haul services in that time – London Gatwick and Johannesburg.

In this situation, the definition of a long-haul route is a flight of over 4,500 kilometres originating from the Asian region. As a result, Beijing has managed to secure this award for the second year running, with seven new long-haul services to Dallas/Fort Worth (11,191 kilometres), San Jose (9,539 kilometres), Melbourne (9,106 kilometres), Minsk (6,436 kilometres), Kiev Boryspil (6,429 kilometres), Basra (6,186 kilometres) and Ashgabat (4,941 kilometres). However, its net results that count here, so the Chinese capital’s growth in long-haul routes diminishes to five given the loss of London Gatwick and Johannesburg over the last 12 months (although this latter route is due to re-start later this year with Air China). Running Beijing a close second, with a net gain of four long-haul routes, was Seoul Incheon, which gained operations to Astana, Athens, Rome Fiumicino, Tel Aviv and Zagreb, but lost Nairobi. 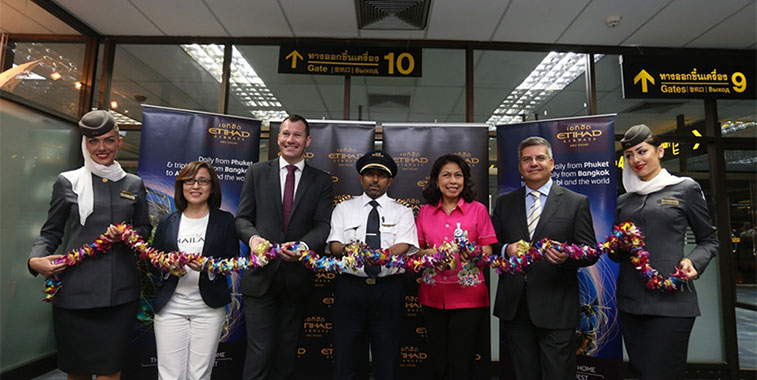 Etihad Airways launched daily services to Phuket in October last year. While this helped the Thai airport secure its win in this category, the fact that the MEB3 carrier’s daily services replaced those offered by partner airline airberlin, also reduced Phuket’s net score by one, as the German airline no longer flies there, with traffic now presumably funnelled through Abu Dhabi instead.

With China picking up two awards from two so far, momentum swings south and west towards Thailand in this category, with the first of three wins for its airports. With a net gain of nine carriers, across a diverse range of business types, including MEB3 carrier Etihad Airways, as well as LCCs like Lion Air, Phuket has secured the 2015 title in this category. Osaka Kansai has had to settle for sharing second prize again, splitting the runners-up cheque with another Chinese airport, this time Haikou. Both airports added a net of seven new tailfins to their respective airport aprons in the last year. 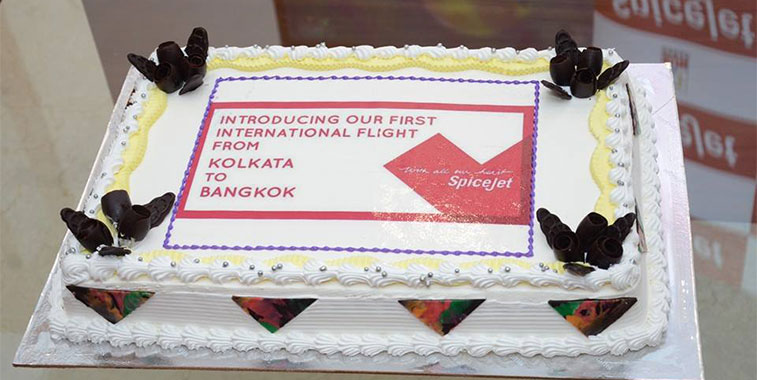 Just one of the 91 airline tailfins you can see at Bangkok Suvarnabhumi this August is that of Indian LCC SpiceJet (currently caught up in an airline love triangle with Qatar Airways and IndiGo), which began services from Kolkata last September. The Thai capital city airport has now won this award for the last four years.

Yawn – some things never change. Following wins in 2012, 2013 and 2014 of the ‘planespotter award’ (as it is affectionately known by anna.aero data elves), Bangkok Suvarnabhumi has done it again in 2015. With 91 airline customers this month, (albeit down from the 95 recorded in last year’s competition), the Thai airport is still comfortably ahead of Hong Kong (runner-up for the fourth time in a row), which welcomes a very respectable 83 carriers (up from 79 last time) to its facilities. 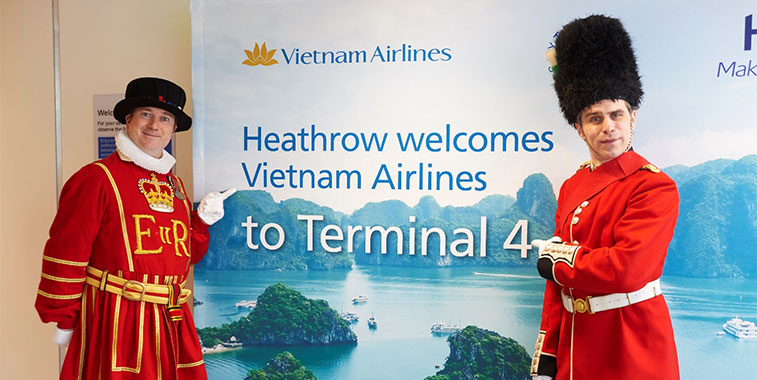 Launched with some pomp and circumstance on 31 March this year was Vietnam Airlines’ new link to London Heathrow from Hanoi. The Vietnamese airport was one of three represented in the Asian ANNIES Airport Traffic Growth Awards – along with Da Nang and Ho Chi Minh City.

Without comprehensive passenger growth data available throughout the Asian region that accurately gives a picture of the fastest-growing airports (although we are starting to build our Rest of the World airport traffic database), these awards are based on the fastest growth in scheduled seat capacity, as reported to OAG Schedules Analyser. The airports are divided into four different categories based on the airport’s size (measured by estimated annual passenger throughput).

Burgeoning Vietnam does well in this award category this year, with three of the eight podium places taken up by its airports – Da Nang, Hanoi and Ho Chi Minh City. The smallest of those three Vietnamese airports performs best, with Da Nang’s 28% annual increase outstripping those recorded by Hanoi (14%) and Ho Chi Minh City (12%). Despite moving up to the heavyweight category (>20 million annual passengers), Bangkok Don Mueang wins for the second year in a row, having been the victor in the 10-20m category in 2014 (it also won in the 2m-5m category in the 2013 awards). As usual it’s the smaller airports that deliver the most significant growth statistics – with Ashgabat’s +238% spike enough to outpace the not-so sluggish Jakarta Halim Perdanakusuma (which re-opened for domestic traffic in January 2014 to ease congestion at main hub Soekarno-Hatta), which registered a 136% increase. 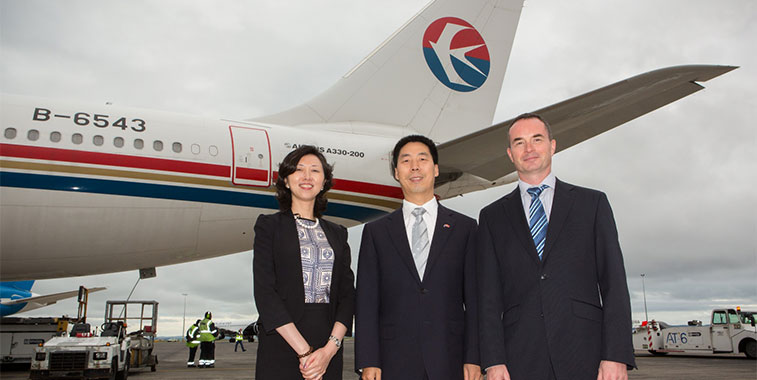 China Eastern Airlines’ award-winning network growth included a mix of domestic and international routes. Last December, the SkyTeam carrier began non-stop flights between Shanghai and Auckland, which counts double in our analysis as both airports are in our geographic area of analysis.

Last year this award went to China Southern Airlines, but this year the airline with the biggest net increase in routes originating at Asian airports is fellow SkyTeam member China Eastern Airlines with a total of 99. As a result, China Eastern is close to overtaking China Southern for the highest number of routes from Asian airports. Remember that new intra-Asian routes will be counted twice, once from each end of the route when both airports are in Asia. Runner-up is Spring Airlines with a net gain of 70 new routes, which represents 35 new city-pairs as all of the airline’s routes are currently within Asia. Cebu Pacific Air launched four new long-haul routes in the last 12 months (to Doha, Kuwait, Riyadh and Sydney) but the Sydney route counts double as it’s also in our geographic area of analysis. 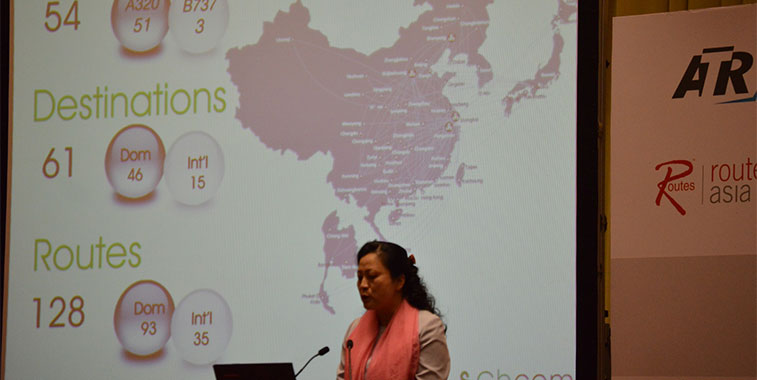 Speaking at the Routes Asia Strategy Summit in Kunming back in March, Spring Airlines’ CEO Zhang Xiuzhi gave a presentation on the airline’s rapid expansion. At that point the airline was serving 61 airports. This has now increased to 75 according to OAG Schedules Analyser, up from 57 last August.

Another tie here as two of the region’s dynamic LCCs both grew their network footprint by 18 airports, in Lion Air’s case from 73 to 91 airports, with Spring Airlines growing from 57 to 75 airports. The Indonesian and Chinese carriers are among the fastest-growing carriers in the region. 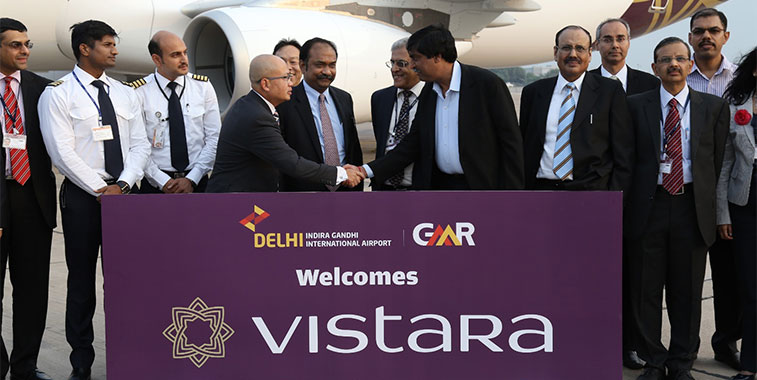 The biggest new airline in the Asian market (since last August) is Indian carrier Vistara. The joint-venture airline, which is supported by Singapore Airlines, now flies over 33,000 weekly seats across a network of 10 Indian routes with its base at Delhi Indira Gandhi International Airport.

This award goes to the airline with the most scheduled seats operating from Asian airports in August 2015 that was not operating in, or to, the Asian region in August 2014. The clear winner in this category is Vistara, the new joint-venture carrier which started operation in January 2015. It operates 245 weekly departures across 10 Indian airports using a growing fleet of 148-seat A320s. This gives it a total weekly seat capacity of over 33,000.