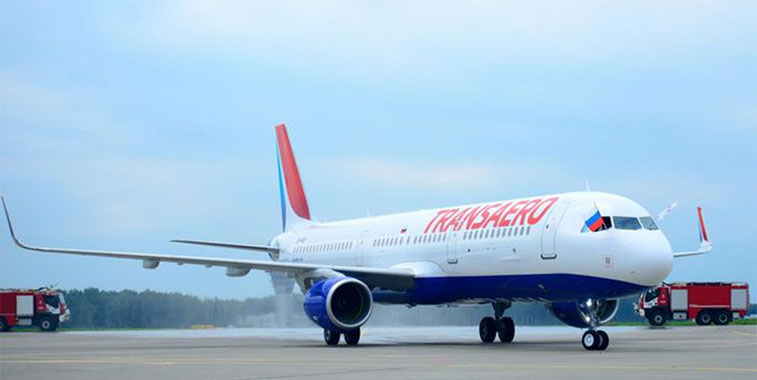 On 3 August, Transaero Airlines became the latest carrier to operate the A321. Commenting on the delivery, Transaero’s CEO, Olga Pleshakova, said: “We are very pleased with this important step being made towards further development of our co-operation with Airbus. The addition of this highly efficient aircraft to the company’s fleet will contribute to enhancing the Transaero’s profitability, optimizing the airline’s passenger capacity, and will see the withdrawal of aircraft, which are of low demand in the current market.”

Following 128 airframes being handed over in June, Airbus and Boeing slowed down their deliveries in July to a grand total of 107, equal to that of May and the same corresponding month of last year. Besides this, the American manufacturer maintained its lead over its European rival in terms of aircraft delivered in July, by delivering nine more units. With this, Boeing strengthened its lead in the 2015 delivery race to 82 units, up from 73 in June.

Having delivered more than 100 aircraft for the sixth month in 2015, the two manufacturers have once again recorded an impressive total. The combined deliveries of both producers for the seventh month of the year was 107, of which 58 came from Boeing and 49 from its European counterpart. Notably, the American manufacturer has matched its total of aircraft deliveries when compared to the same month last year. Airbus also delivered the same amount when compared to July 2014. Overall 77% of deliveries in June were narrow-body aircraft, with 23% wide-body. However when looking at the wide-body market, Boeing produced 84% of aircraft, a result of Airbus only delivering four in July, down from 19 in June. 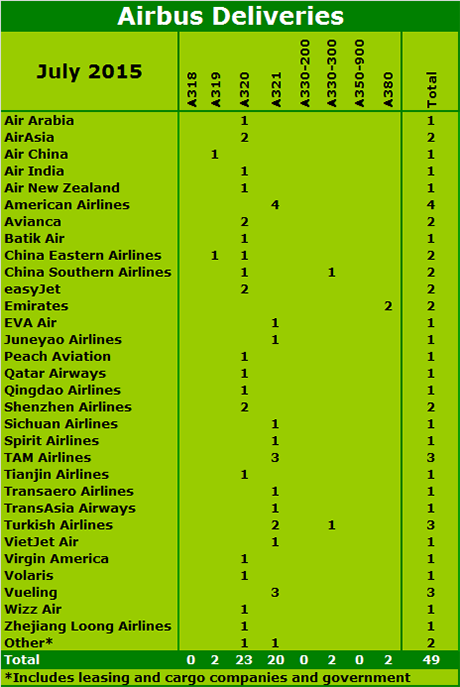 Airbus ended July with a total of 49 units being delivered to airlines, which is 12 less airframes than the amount delivered in June, and equal to that of the corresponding month last year. Over the period of January to July in 2015, the European producer delivered 353 units, representing an increase of just one unit on the same period in 2014.

Once again, single-aisle deliveries in July were led by the A320 (23 units, up one from June), with a total of 45 single-aisle aircraft being provided to carriers around the world (up three from last month). This means that Airbus produced 18% more narrow-body aircraft than Boeing in July. AirAsia, Avianca, easyJet and Shenzhen Airlines were the top recipients of the A320 in July, each picking up two of the type. In total, 18 carriers received the variant, with 12 receiving the A321, the second most delivered narrow-body aircraft from Airbus in July, with a total of 20 deliveries. American Airlines was the largest recipient of the type, taking four of the airframes in July, followed by TAM Airlines and Vueling which both accepted three each respectively, with the latter now having a total of four A321s in its fleet, after accepting its first one in June.

Looking at wide-body deliveries, Airbus handed over four airframes in June, 15 less units than last month. Following on from the delivery of three A380s in June, and three in May, the European producer handed over only two in July, with both going to the largest operator of the A380, Emirates. The rest of Airbus’ wide-body deliveries in July went to China Southern Airlines and Turkish Airlines, with each receiving one A330-300. Vietnam Airlines, which took delivery of its first A350-900 last month, accepted its first 787-900 on 6 July, making the carrier the second airline in the world to operate both 787 and A350 aircraft, with Qatar Airways being the first. The SkyTeam member has a firm order for 19 of the type. The airline decided to celebrate the milestone by completing a fly-past of the Washington memorial. 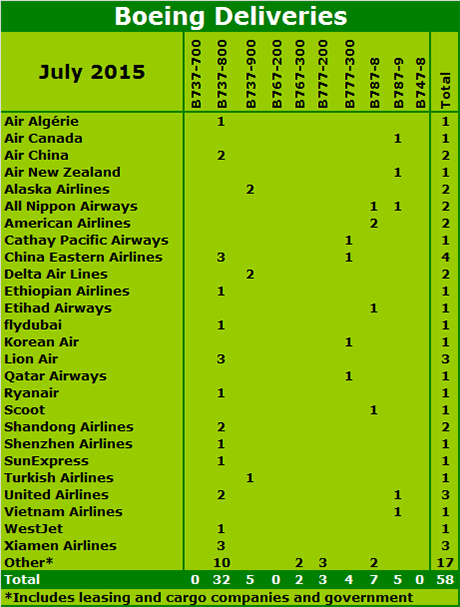 Boeing closed July with a total of 58 unit deliveries, 11 less than in June, but equal when compared to the corresponding month of 2014. Nevertheless, the American producer’s total for the first seven months of 2015 is 435 aircraft, an impressive 35 units (9.3%) more than in the corresponding period last year.

Airlines received a total of 37 single-aisle units from Boeing, seven less than in June, and equal to that of May. It was however eight less than what Airbus delivered in July. China Eastern Airlines, Lion Air and Xiamen Airlines were the largest recipient of the 737-800 in July, as each incorporated three of the variant into their respective fleets. In total, 16 airlines were delivered single-aisle units from the American manufacturer during July, one less than the 17 carriers in June, yet 10 were delivered to leasing companies. It is also worth noting that 41% of single-aisle deliveries from Boeing last month were to Asian airlines, with 19% being North-American carriers.