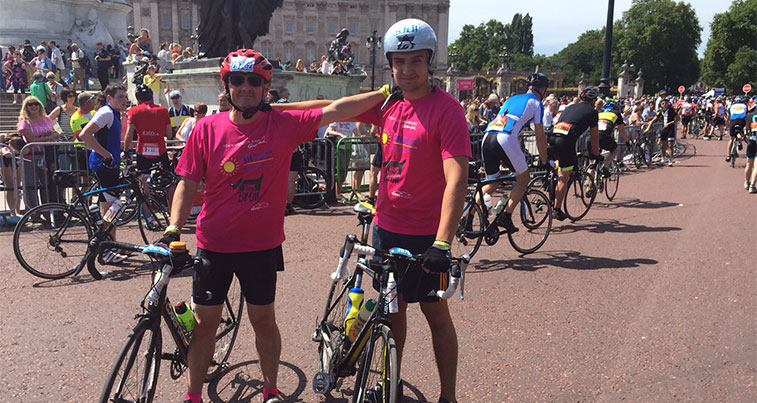 Wearing the ‘Your London Airport, Gatwick’ shirts: anna.aero’s ‘TeamBron’ at the finish outside Buckingham Palace after racing 100 miles around traffic-free London streets and steep Surrey hills.

anna.aero’s TeamBron competed alongside 26,000 others in the 100-mile Prudential RideLondon-Surrey cycle race on 2 August with the generous backing of Your London Airport, Gatwick, raising money for 3H Fund – a charity within the airport’s close catchment area which helps disabled children to go on much-needed holidays.

The Prudential RideLondon-Surrey 100 follows the classic London Olympics road race course beginning at the Olympic stadium – now renamed Queen Elizabeth Olympic Park – before snaking out through closed roads across the capital and the Surrey hills – including the famous Box Hill climb, and the 300-metre Leith Hill, before returning to London and a sprint past Big Ben to the finish on the Mall in front of Buckingham Palace.

“anna.aero was proud to fly the London Gatwick flag as we raced in bright sunshine on the traffic-free streets of London and Surrey – the very best way to see this great city at its finest. London Gatwick offers the best convenience and connections if you want to visit the mega city of London, or see nearby breath-taking sights like Box Hill. We’re grateful for Gatwick’s support, and so are the children, families and carers supported by 3H” said anna.aero’s publisher, Paul Hogan.

Hogan, and his son Max, a student of Marymount University, Virginia, completed the 100-mile race in six-and-a-half and six hours respectively. TeamBron is named for named for Brontë “Bron” Hogan, the anna.aero publisher’s 12-year-old daughter, who passed away in 2011 after a five-year battle with leukaemia. The next outing for TeamBron is the Airbus-sponsored anna.aero-Budapest Airport Runway Run, the air transport industry’s own charity race which takes place on Budapest Airport’s Runway 13R-31L on Saturday 5 September in aid of child cancer charities and other good causes.