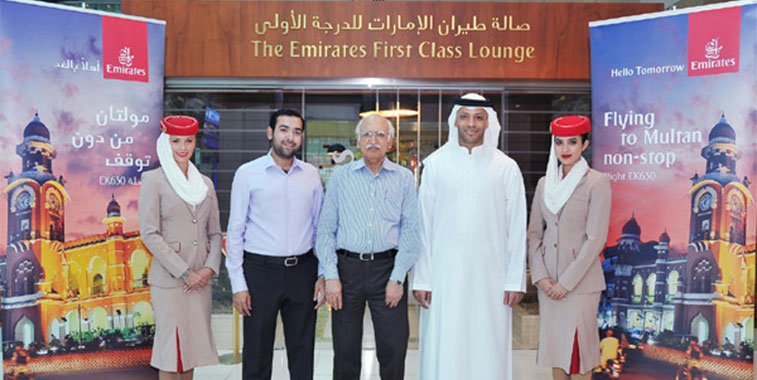 Last week, both Emirates and Qatar Airways commenced flights from their respective hubs to Multan in Pakistan. Since August 2010, capacity growth from the Middle East to this Indian Subcontinent nation has outpaced the other five potential market pairs, with an 82% growth in weekly seats and an 83% increase in weekly frequencies.

As a result of several recent route launches between the Middle East and the Indian Subcontinent, plus the ongoing love triangle between Qatar Airways, SpiceJet and IndiGo, our data elves thought it might be pertinent to take a look at the trends between these two blocks of nations. While the boundaries of the Middle East are pretty well-defined, those pertaining to the Indian Subcontinent are perhaps not. For this piece of analysis the wider definition of this global sub-region has been used, and therefore includes the following seven countries: India, Pakistan, Bangladesh, Nepal, Sri Lanka, Bhutan and the Maldives. It should be noted however, that for the two reference periods – the week commencing 6 August 2010 and 6 August 2015 – there were no services from any Middle East nation to Bhutan.

The remaining six markets together have grown by over 57%, increasing to nearly 570,000 weekly seats in August 2015 from the 360,000 flown in August 2010. While the growth in weekly capacity in the largest market of India is the biggest absolute increase, with over 100,000 extra weekly seats in the last five years, this 51% spike in activity is not the most significant. Climbing by 82% since August 2010, it is Pakistan which has seen the most prominent rise in weekly capacity since August 2010. With figures of 69% and 66% respectively, the Maldives and Sri Lanka have also outpaced the growth experienced in the #1 market of India. 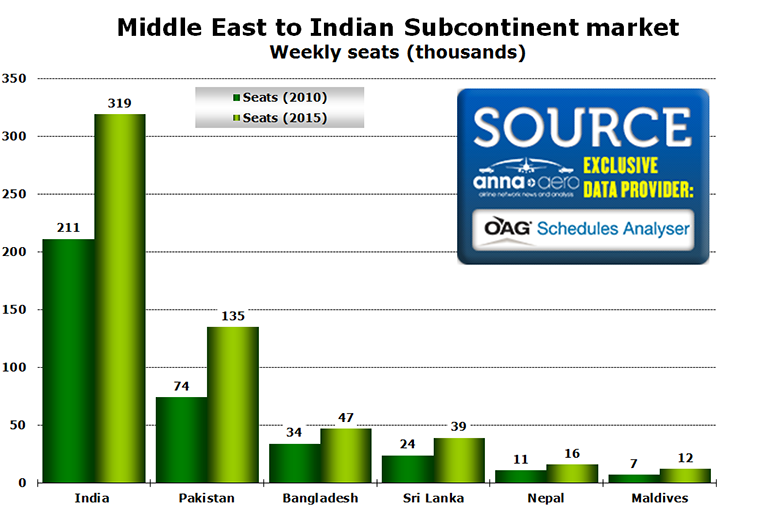 Considering just the biggest of the six markets, in August 2015 there are 20 airlines operating between the Middle East and India, led by Emirates and followed by Jet Airways. The third largest carrier depends on your view of Air India Express, because if its weekly capacity is added to that of parent Air India, it is less than 300 seats behind Jet Airways (54,137). If these two airlines are considered independently, then Etihad Airways ranks third with just over 30,000 weekly seats. Of course, if you take into account the latter’s relationship with Jet Airways, then this grouping would be the #1 supplier in the market, even if you add flydubai’s 5,121 weekly seats to Emirates’ tally. Just to finish this off, if the marriage between Qatar Airways and IndiGo goes ahead, then the combination of these two airlines would be in third or fourth place, depending on what you had assumed above. Phew. Clearly it’s an important market and that is why these deals have, or are maybe, going to be done. 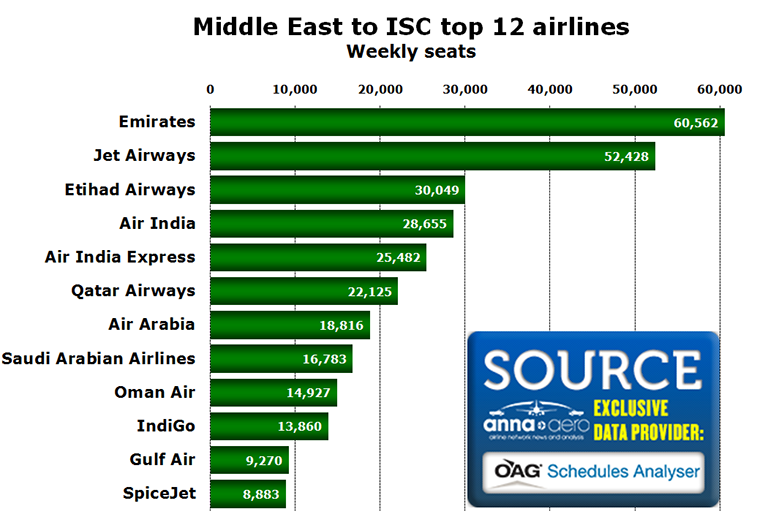 Bizarrely there has been a form of consolidation of the market place since five years ago, as 23 carriers operated between the Middle East and India in August 2010. While there has been the loss of seven airlines in this period including the likes of Kingfisher Airlines, Bahrain Air and Nas Air (now flynas), four airlines have entered the market – namely IndiGo, SpiceJet, Iraq Airways and Citilink.

Of the top 12 airlines, which represent 95% of seats (up from 94% in 2010), in the Middle East to India market, the fastest growing airline is Etihad Airways, which has grown by a staggering 420% in the past five years, from a base of less than 6,000 weekly seats, which has also seen it jump from 11th biggest carrier to third. Its partner, Jet Airways, comes in second with a 125% increase. Market leader Emirates has posted far more modest numbers, with 33% growth or nearly an extra 15,000 weekly seats.