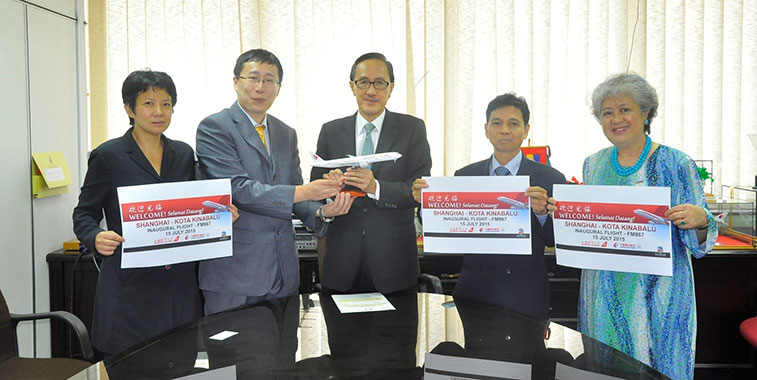 Malaysia’s Minister of Tourism, Culture and Environment Sabah, Datuk Masidi Manjun (centre), said that the recently launched Shanghai Airlines (China Eastern Airlines subsidiary) flight to Kota Kinabalu will benefit in terms of the economy and tourism aspects of both respective countries. “We are pleased to be included into the network, China Eastern is one of the best world-class airlines, and this airline is also renowned for great service and great international destinations.” With 2014 and 2015 passenger numbers faltering at the airport, Kota Kinabalu could do with a boost to its fortunes after years of solid growth.

Formerly known as Jesselton Airfield, Kota Kinabalu Airport has gone through various phases of upgrade to get to where it is today ‒ Malaysia’s second busiest airport, after KL International which serves the capital. Located eight kilometres from the city of Kota Kinabalu, the single runway airport acts as the main gateway into the state of Sabah and into Borneo, and currently has a capacity to handle nine million passengers per year. This August, Kota Kinabalu is served by 13 airlines offering 30 non-stop scheduled destinations from the airport. 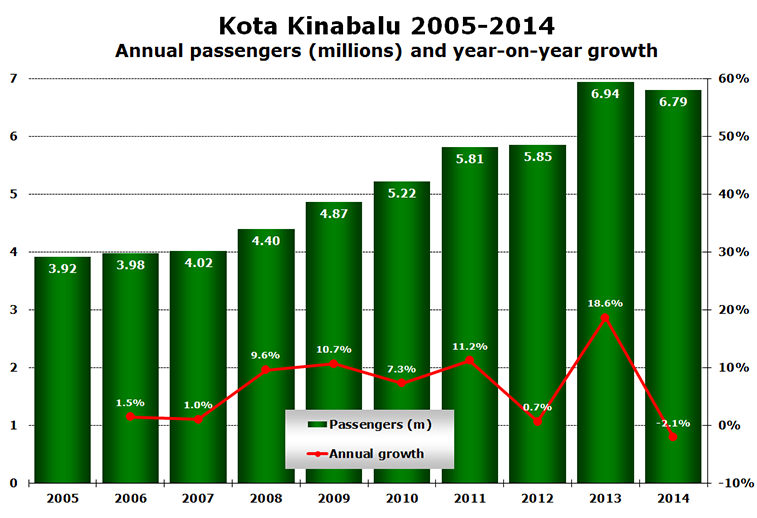 Unlike most airports around the world, Kota Kinabalu seemed to have been immune from the effects of the global economic downturn in 2008 and 2009, with no abatement from its impressive growth trajectory which saw the facility add over three million annual passengers between 2005 and 2013. Unfortunately in 2014 it has perhaps suffered more than other airports in the country from the effects of the two Malaysia Airlines incidents. That said, of the 26 airports which Malaysia Airports Holdings Berhad (MAHB) provides passenger figures for on its website (it also operates numerous other STOLports), Kota Kinabalu is one of nine airports that posted a reduction in traffic in 2014. By contrast, Penang Airport which is currently the third largest in Malaysia, having handled just over six million passengers last year, recorded growth of over 10% in 2014, meaning the airport has narrowed the gap on Kota Kinabalu, which saw its traffic fall marginally in 2014.

With only 13 serving carriers it’s not surprising that the top 12 airlines currently deliver over 99% of weekly seats (up from 98% in August 2014). Offering nearly 51% of weekly seats from the airport, AirAsia has extended the gap over its main domestic rival Malaysia Airlines since last August. With AirAsia growing by 2.1%, the difference between the two airlines has increased to nearly 15,000 weekly seats, up from just over 13,000 a year ago, due also in part to the flag carrier’s 2.3% capacity reduction. With seats at five airlines from the top 12 carriers remaining unchanged over the last 12 months, with the exception of newcomer Jin Air and the two previously mentioned airlines, the remaining four serving carriers, Asiana Airlines (-19%), Malindo Air (-8.1%), Royal Brunei Airlines (-6.6%) and Silk Air (-5.0%), have all posted capacity declines. 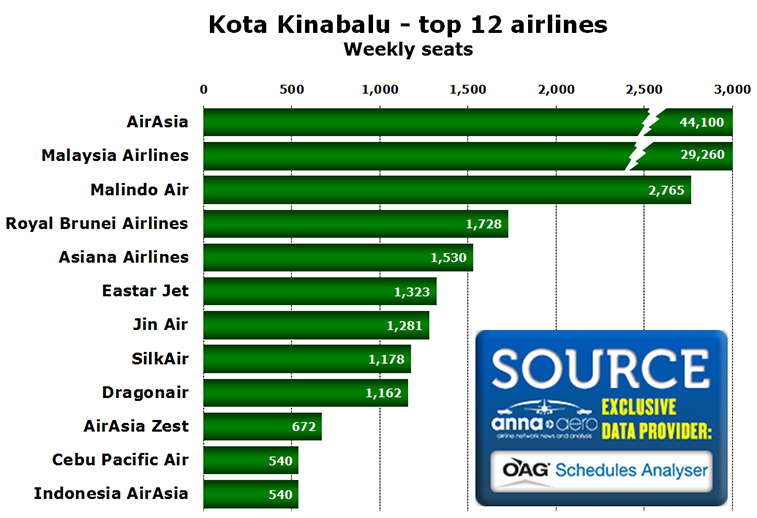 Over the last 12 months the airport has seen the withdrawal of services from the likes of HK Express, Spring Airlines, Berjaya Air and Korean Air. However, the latter has presumably been replaced by its in-house LCC Jin Air, the wholly-owned subsidiary of Korean Air, which now operates daily to Seoul Incheon. The new #12 airline, Indonesia AirAsia, started four times weekly services from Jakarta in January this year, while the #10 airline AirAsia Zest began flights from Cebu in March. Shanghai Airlines, which is in 13th spot, began thrice-weekly operations from Shanghai Pudong on 15 July.

Kota Kinbalu is just one of five of MAHB’s airports which is defined as international, so it is not surprising to see some regional international routes (highlighted in light green) in among the predominantly domestic-dominated top 12 portfolio of routes. While the order of the airport’s top dozen routes may well have changed since August 2014, the same 12 airports hold the top positions. A year ago these routes commanded 84% of weekly seats, another figure which has gone unchanged when looking at this year’s capacity – as it is still 84%. Seats to the capital have risen by 3.9% year-on-year. However, the route with the biggest annual growth is that of Taipei Taoyuan, which has risen by 16% from last August, helping it leapfrog the domestic route to Lahad Datu into 11th place (itself dropping by 3.1%). The fastest declining route was the domestic city pair to Johor Bahru (down 19% annually), seeing it fall from sixth position in 2014 to eighth this time out. 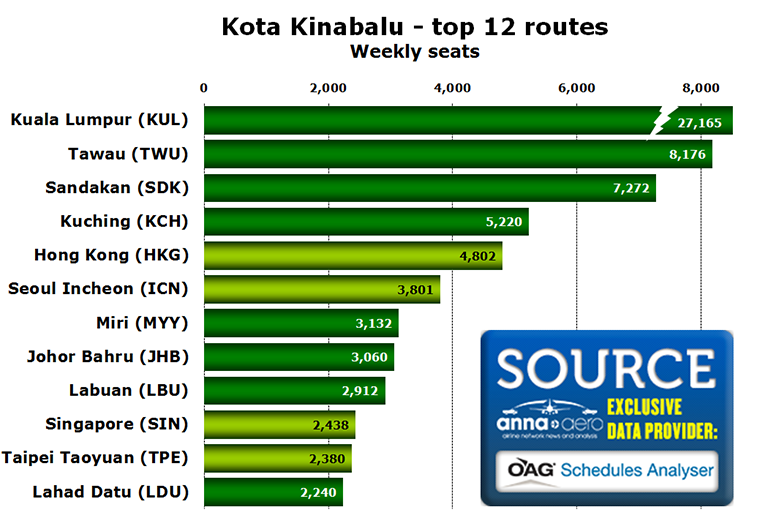 In the same week last year, the airport had a network of 31 routes. The destination lost since August 2014 is Puerto Princesa (PPS – our second favourite airport in the world, after our local airport London Gatwick, as anna.aero’s publishers are called PPS Publications) in the Philippines, which was served by Malaysia Airlines up to five times weekly until 31 August last year. Currently there are no announced new services to Kota Kinabalu for the remainder of 2015 or 2016, according to anna.aero’s New Route Database.