fastjet grows from mid-September with arrival of fourth A319; 750,000 passengers carried in last 12 months from Dar es Salaam base 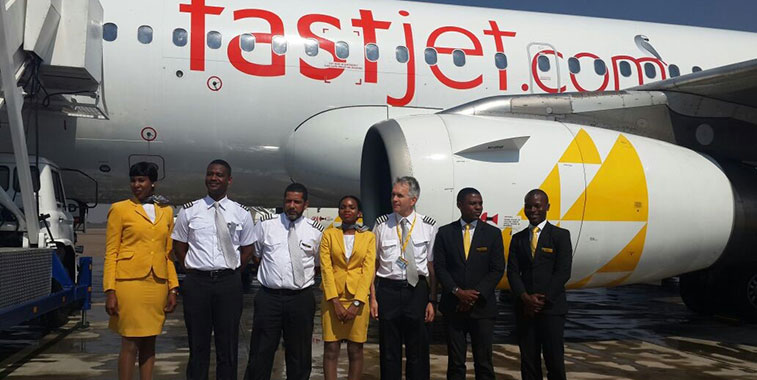 fastjet’s most recent route launch was from Dar es Salaam to Lilongwe in Malawi on 27 July. The route is currently served twice-weekly, though frequency will increase to four flights per week from mid-September. The LCC now operates to nine airports, four in Tanzania and five others in five different African countries.

The idea of a pan-African LCC is very appealing, but the lack of liberalisation across much of the continent has made it impossible (so far) in practice. fastjet was established to try and be such a carrier, but at present it has been confined to operating domestically and internationally from Tanzania, with its main base at Dar es Salaam. The airline’s first flight was on 29 November 2012 when domestic services were introduced. International flights started on 18 October 2013 with the airline’s first service to Johannesburg. fastjet now operates in four further countries; Malawi, Uganda, Zambia and Zimbabwe. 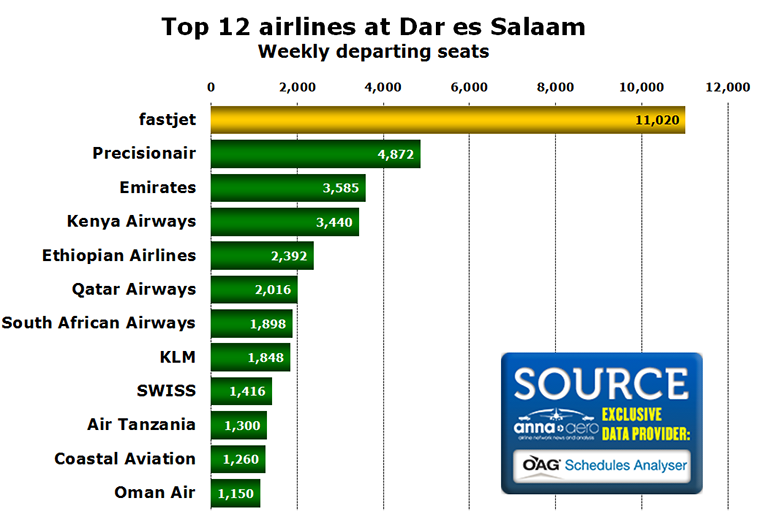 In Dar es Salaam fastjet is by far the leading carrier with over 11,000 weekly departing seats on its fleet of three A319s. This represents over one quarter of all seat capacity at the airport. The airline’s most recently published traffic statistics indicate that it carried 71,763 passengers in July (a new monthly record), an increase of 36% on the same month in 2014. Load factor was 72%. In 2014, fastjet carried almost 600,000 passengers. In the 12 months ending July 2015 that has increased to almost 750,000.

fastjet operates to five destinations non-stop in both directions from Dar es Salaam. These are Kilimanjaro, Mbeya and Mwanza in Tanzania, Johannesburg (South Africa) and Lilongwe (Malawi). Entebbe in Uganda is served from Dar es Salaam via Kilimanjaro, while Harare (Zimbabwe) and Lusaka (Zambia) are served using a triangular routing; Dar es Salaam-Lusaka-Harare-Dar es Salaam, resulting in both routes having a stop in one direction. 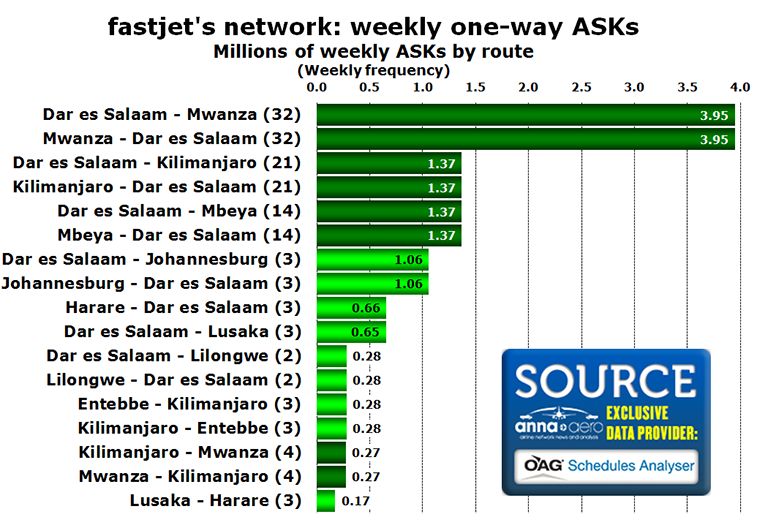 The airline’s domestic routes (shown in dark green) currently account for 75% of total weekly ASKs (Available Seat Kilometres), with the route to Mwanza alone accounting for over 42% of the carrier’s ASKs.

From mid-September fastjet’s fleet will increase to four A319s. No new routes are being added at this time but there will be frequency increases (especially on international routes) and schedule quality will improve with the return flight from Johannesburg no longer operating during the night. Frequency on the Johannesburg route will also increase from three flights per week to seven. The arrival of the fourth aircraft will see weekly flights across the network increase from 167 to 217, with international sectors almost doubling from 25 to 49. As a result, the proportion of ASKs coming from domestic flights will fall from the current 75% to around 61%. 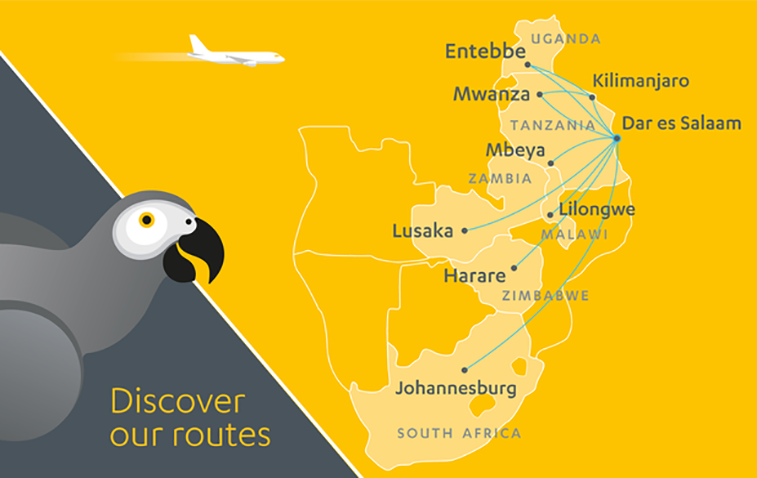 fastjet’s network currently comprises nine airports, including four in Tanzania. The airline’s longest route is to Johannesburg in South Africa, which was also the carrier’s first international destination. The addition of a fourth A319 in mid-September will help allow frequency increases on international routes, but will not see any new routes launched.