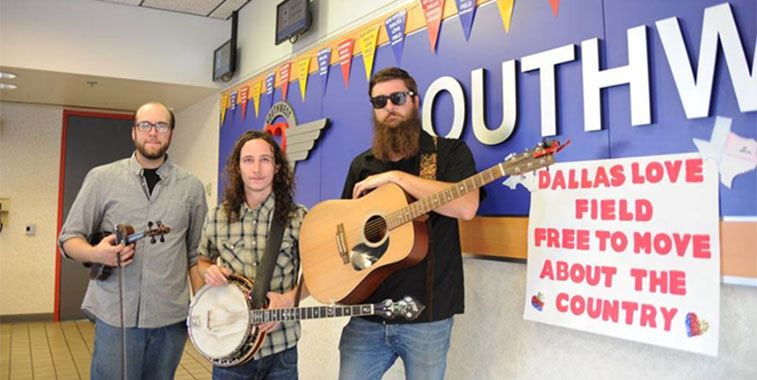 This week witnessed Southwest Airlines add nine new routes from its home base at Dallas Love Field, meaning a total of 34 destinations have been added in the past 12 months. In 2014, Love Field achieved a double-digit increase in passenger traffic of 11%. This significant growth was due to the Wright Amendment having expired on 13 October 2014, allowing destinations that once could not be operated non-stop to be served direct.

Southwest Airlines is the biggest LCC in the US, and last year carried nearly 130 million passengers, making them the second largest airline in the world after American Airlines as measured by passenger numbers. This year, the figure is expected to increase, especially out of the airline’s home base at Dallas Love Field Airport, due to an additional 34 destinations being added in the last 12 months, a result of the repeal of the Wright Amendment.

Now for the aviation history lesson. In 1979, the Wright Amendment was a federal law that governed air traffic at Dallas Love Field and some laws at fellow airports in the Dallas/Fort Worth (DFW) Metroplex, the name of the 12 counties that encompass the northern section of Texas State. The original reason for the act coming into effect was because of the opening of the new ‒ at the time ‒ DFW Airport, and to make it viable other airports in the region were restricted to maximum passenger levels and destinations they could serve, specifically to airports in Texas and neighbouring states. As a result, most airlines signed an agreement to relocate to DFW.

On 15 June 2006, it was announced that American Airlines, Southwest, DFW and the cities of Dallas and Fort Worth had agreed to seek a repeal of the Wright Amendment. One of the conditions however of this repeal was the ban on non-stop flights outside the Wright zone staying in effect until 2014.

Until now, Southwest has operated many one-stop services from Love Field to various destinations across the US. However on 13 October 2014, the full repeal of the Wright Amendment came into effect, resulting in the LCC starting a major expansion from Love Field, and this week the airline added a further nine routes from the airport, including services to Boston and Pittsburgh, destinations that once could not be served unless a one-stop service was in place. 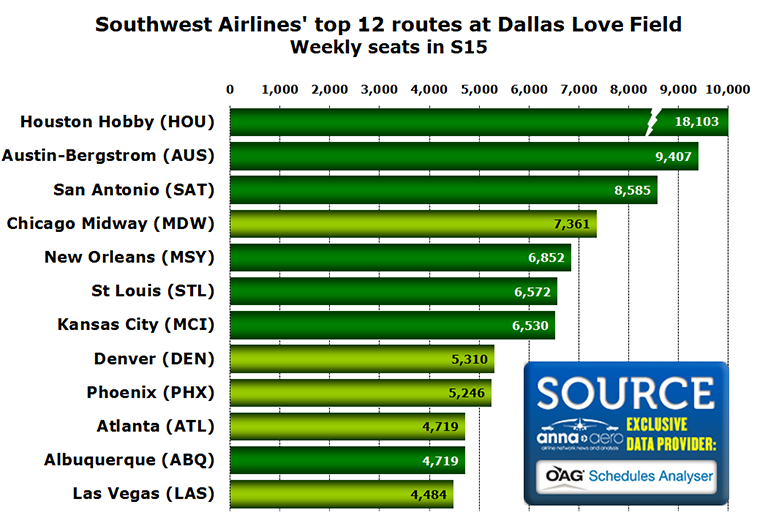 Despite the expansion from Southwest at Love Field, the carrier’s route to Houston Hobby remains its number one. However, the airport pair has seen a decrease in seat capacity of 10 percent when compared to 2014, a consequence possibly of some existing capacity being utilised on new services. It is also worth noting that American Airlines has increased seat capacity on services from DFW to Houston Hobby by 5.4% when compared to last year. As a direct result of this expansion by the airline, five new airports (highlighted in light green) have appeared in Love Field’s top 12 routes for Southwest in relation to seat capacity, the most notable being Chicago Midway in fourth. Coincidentally, this route means that the LCC has become the second largest carrier on the Chicago to Dallas (and also Fort Worth) market pair after American Airlines, and has allowed it to capture just over 22% of seat capacity in the market. 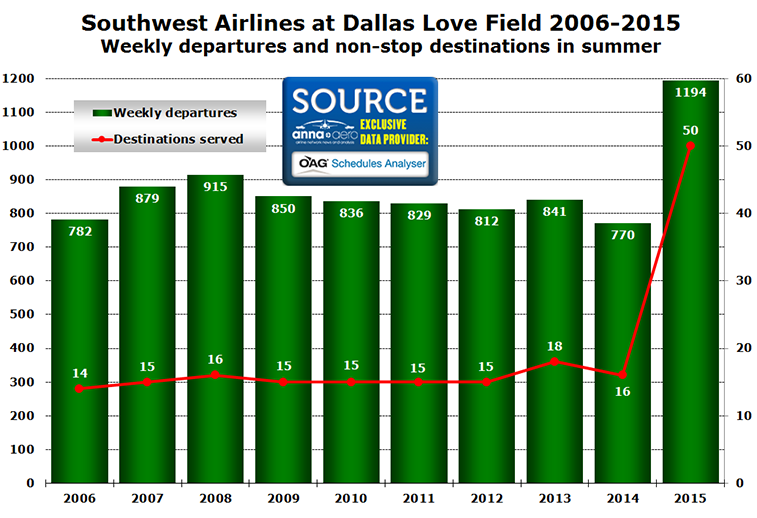 The average weekly frequency for Southwest’s routes at Love Field has declined heavily as a direct result of its expansion, decreasing from an average of over 48 weekly flights in 2014 to around 23 flights in 2015. However, this figure was at its peak in 2006, when an average frequency of 55 weekly flights were operated across the airline’s then 14-destination network at the airport.

Expansion comes at a price

Although Southwest has expanded by 38% from Dallas Love Field since 2014, this has resulted in all routes that operated last year, except Midland/Odessa, witnessing a decrease in seats. Presumably this capacity cull is as a result of passengers choosing to go direct to new destinations from Love Field rather than one-stop as they did before the Wright Amendment repeal. More detail can be seen in the table below.

Texas is still most popular market

As a result of Southwest’s growth from Love Field, 23 new states have been added to the airline’s network from its home base. Following the expansion by the airline, Alabama, Arkansas and Kansas (states served before the growth) do not appear in the top 12 most popular states from the airport in S15. Further details of the top 12 states can be found in the table below.

As we can see, due to the dissolving of the Wright Amendment, the focus has shifted to destinations in states that do not neighbour Texas, with California being the largest new market for the airport, making up 7.8% of capacity for Southwest from Love Field in 2015. Florida, Maryland, Illinois, Colorado, Arizona and Georgia are new state markets from the airport for this year that have also made it into the top 12.

Of the 16 routes operated by Southwest from Love Field in 2014, only two make the 2015 top 12 ASKs (highlighted in light green), with Houston Hobby being placed eighth compared to first, and St. Louis being one place below Houston Hobby compared to its position of second last year. This result shows the development of Southwest’s expansion to destinations that once could not be served directly. In total from the airport, Southwest operates seven routes with more than six flights per day, with the destinations being led by Houston Hobby which has an average daily frequency of 19 flights. All of the top 12 routes in relation to ASKs operate with at least a daily frequency. 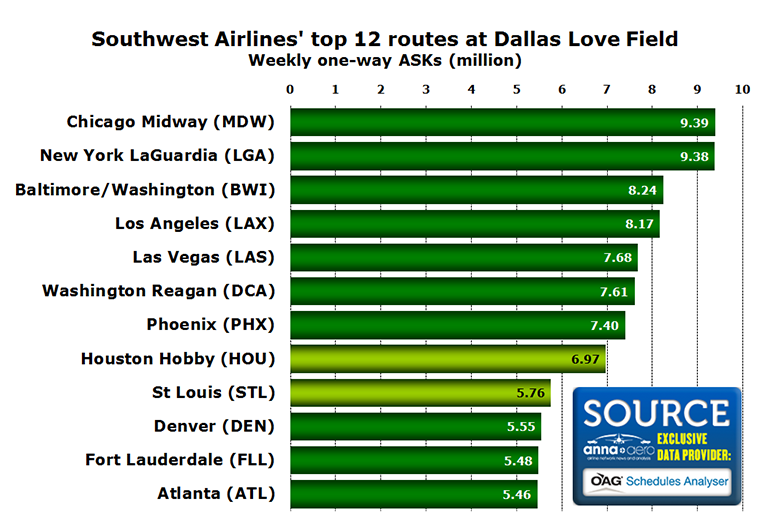 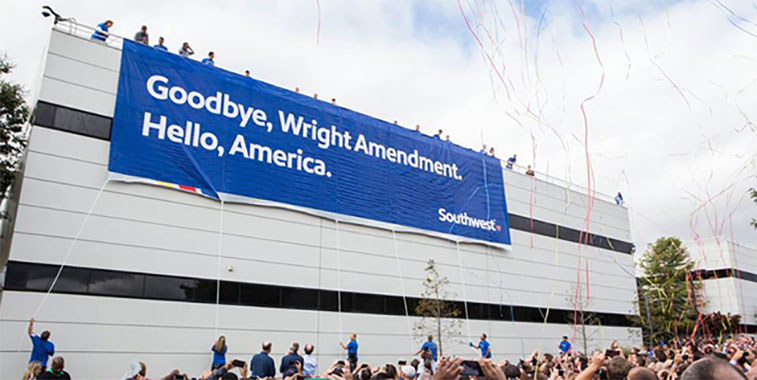