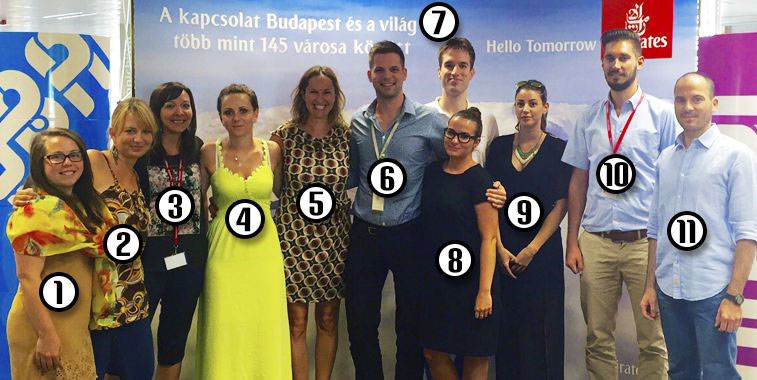 “I will take the Emirates team to the top three,” says Team Captain, Attila Bors, Emirates Contact Centre Operations Officer (he’s number 7 hiding at the back in the photo).

Emirates has announced a powerful team entry for this year’s Airbus-sponsored anna.aero-Budapest Airport Runway Run – the race taking place on Runway 13R-31L at Budapest Airport on Saturday 5 September in aid of child cancer charities and other good causes.

The MEB3 airline is making a serious pitch at winning the prize for “The Fastest Airline In The World” by lining up against other teams and individual entries from some 85 airlines, airports and other aviation enterprises, which have already signed up to run the two race lengths of either 5km (two runway lengths) or 10km (four runway lengths).

As most airlines and airports already have major charity commitments, there’s no need for participants to raise big cash sponsorship targets – competitors just have to pay an entrance fee, only €50 per runner, with 100% of this sum donated to the benefiting charities.

What they said: Team Emirates talk training and tactics: