On 9 August, Pittsburgh Airport welcomed the arrival of Southwest Airlines’ latest route from Dallas Love Field. As a result, the LCC now operates to a total of 14 destinations from Pittsburgh non-stop, meaning it is equal with American Airlines for the amount of airports served direct from the city.

Pittsburgh is the second largest city in Pennsylvania after Philadelphia, and in 2010 Forbes named Pittsburgh as the most liveable city in the US based on the following data: unemployment, crime, income growth, the cost of living, and artistic and cultural opportunities. The city also has a strong university (colleges for our US readers) presence, with the city having over 12 campuses, making it also one of the most youthful urban populations in the US. Like many cities around the world, the economic crisis of 2009 affected many industries, especially aviation, resulting in declining passenger traffic for most airports. However Pittsburgh Airport is finally seeing growth, and from January to May this year, passengers traffic increased by 1.3%. 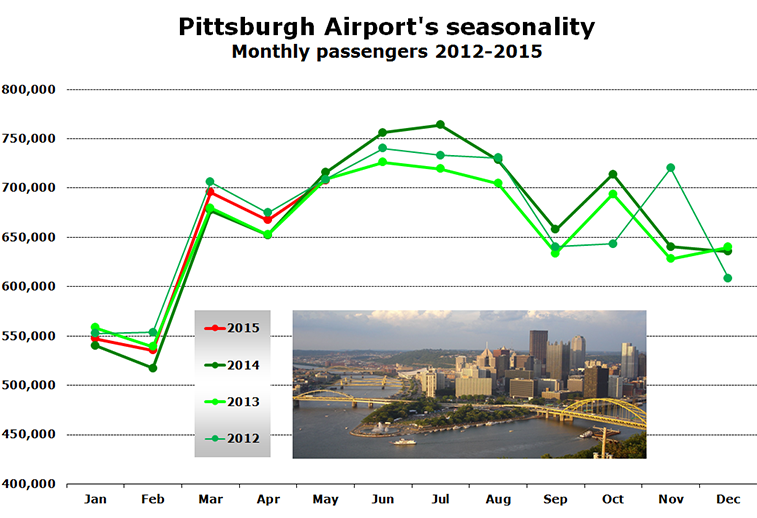 Although Pittsburgh Airport has had a tough couple of years as a result of passenger numbers declining, things are starting to look up with growth being seen in four of the first five months of 2015. Nonetheless, up until May, the airport witnessed an extra 10,000 people travel through the facility compared to the same corresponding period of last year.

When analysing monthly passenger figures from Pittsburgh, the airport achieved a SVID score of 1.49 (“Excellent”), placing it 20th out of the 50 plus airports analysed so far in 2015. In comparison, fellow Pennsylvanian airport Philadelphia scored 1.38 (18th overall), while Cleveland, which is of a similar size to Pittsburgh in relation to passenger traffic, scored 0.92 (ninth), meaning both achieved (“Excellent”) results. 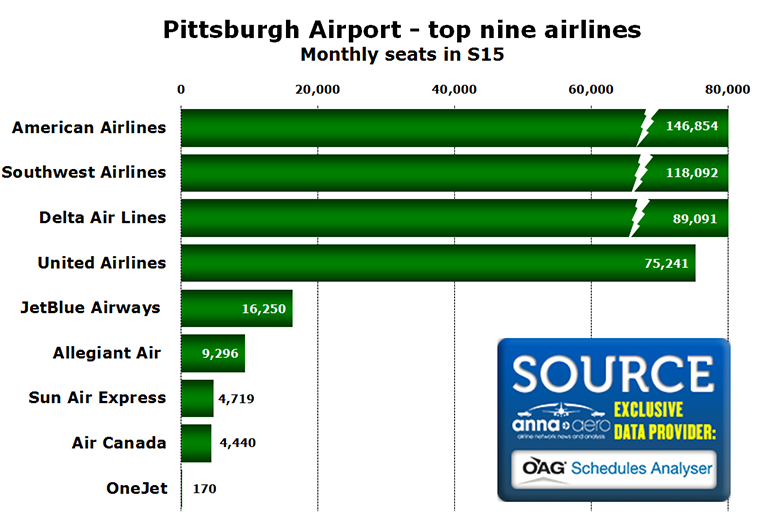 American Airlines has grown the most in the last 12 months, incorporating an extra 27% of seats into its operations from the airport. Nonetheless this is most likely due to the merger with US Airways, which if it was still an individual airline, would be reporting a decrease in seat capacity of -18%. As a result, the combined operations of the two airlines makes it the #1 carrier at Pittsburgh in S15. The merger has also resulted in Southwest Airlines now becoming the second largest airline from the airport, even after the acquisition of AirTran Airways. Apart from US Airways, all carriers that flew from the airport in 2014 that are also operating in 2015 from the facility are showing capacity increases, with JetBlue Airways (27%), Air Canada (8.3%), Delta Air Lines (5.2%), United Airlines (1.7%) and Southwest (1.5%) all reporting positive increases.

Despite being the number two carrier from Pittsburgh, Southwest increased seat capacity by 1.5% when compared to last year, however this figure does take into account the acquisition of AirTran. On 9 August, the LCC launched its latest destination from the airport to Dallas Love Field, a route that would not have been possible before October last year due to the now redundant Wright Amendment. When anna.aero spoke to Pittsburgh Airport’s Brian Dietz, VP of Air Service Development, about the expansion seen by Southwest, he said: “We are delighted that Southwest has grown its Pittsburgh market to 14 non-stop destinations, tied for the most non-stop destinations with the ‘new’ American Airlines. We continue to work with Southwest on a variety of markets, including their existing markets and additional West Coast destinations that complement Pittsburgh’s existing services.” See how Pittsburgh Airport’s FTWA, for the launch of services to Love Field, compares to others from around the world this week.

On 4 May, Pittsburgh Airport welcomed the arrival of its latest carrier OneJet. The unique strategy of the airline is specifically designed to cater for the business market, with the carrier operating flights on seven-seat Hawker 400 jets. When we asked Dietz about the latest carrier to join the airport, and how it is supporting its operations, he replied: “OneJet is a fantastic new service that caters to business professionals and currently provides non-stop services to Milwaukee and Indianapolis. We think their strategy of targeting business professionals serves a unique niche in the Pittsburgh market, and we hope to see that service grow. We provide support for them through community introductions and ensuring their operation at the airport meets the needs and expectations of their customers.”

With the airport witnessing an increase in seat capacity from the majority of serving carriers, anna.aero asked Dietz about the possibility of future expansion from these airlines. Dietz commented: “The airport is focused on supporting existing services to ensure each route is sustainable in the long-term. In addition to that, our air service development team is also currently in discussions with potential new carriers that strategically make sense in the Pittsburgh market.” 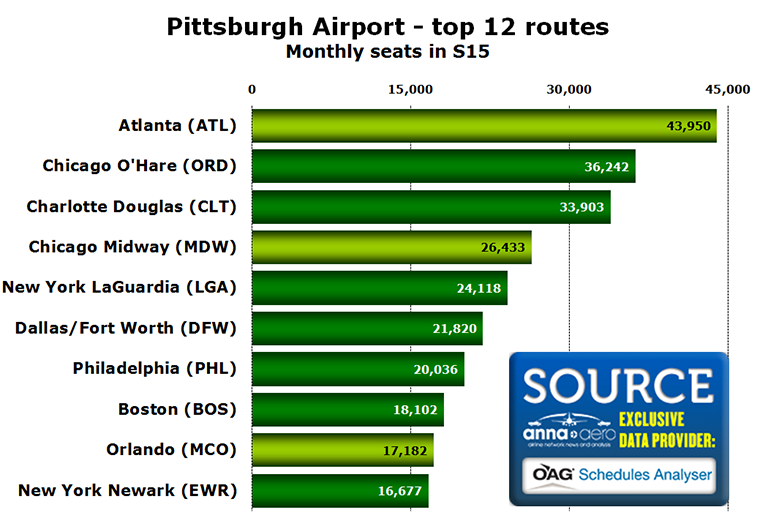 Although Southwest Airlines is the largest LCC operating from Pittsburgh in relation to seat capacity, it only operates on three of the top 12 routes from the city (highlighted in light green), with Chicago Midway being the only route where it is the sole carrier. However the LCC does control 42% of seats on the city pair between Pittsburgh and Chicago, as Chicago O’Hare is also served by American and United. This being said, the fastest growing airlines out of Pittsburgh is JetBlue, which is operating services to Fort Lauderdale for the first time this summer, after launching the route on 30 October 2014. As a result, the carrier is reporting a capacity increase of over 26% when compared to S14.

New York capacity up by over 10%

One of the biggest markets to see an increase in seat capacity is New York, with JFK (19%), LaGuardia (5.3%) and Newark (12%) all showing rises in S15. With New York JFK being home to JetBlue’s main base, Pittsburgh is a route it could consider, especially after the capacity increase seen by it this year from the airport. Also with the rise in capacity being seen from other carriers in the New York market, it shows that demand is growing between the two cities.

On 11 August, Allegiant Air announced its fifth destination from Pittsburgh, this time to Orlando Sanford which will launch on 5 November. On 21 September, another new carrier will also be joining the airport. Porter Airlines will be introducing service to Toronto City, complementing current service to Toronto Pearson operated by Air Canada. When anna.aero asked Dietz about which markets the airport is focused on growing, and where services need to be developed, his reply was: “Pittsburgh’s top goals at the moment are to increase non-stop services to the West Coast and to introduce services to Europe. From an airport perspective, the West Coast markets are the most underserved domestic markets from Pittsburgh, in particular San Diego and Seattle.” 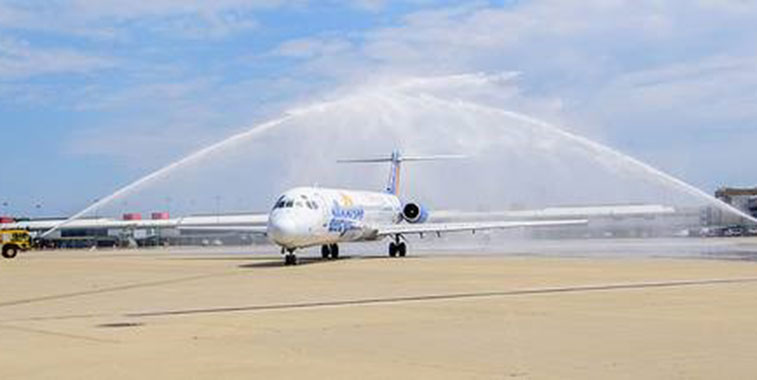 On 5 June, Pittsburgh Airport welcomed the arrival of Allegiant Air’s latest route from Myrtle Beach in South Carolina. Along with this route, the carrier has also introduced services to Jacksonville, Fort Myers and St. Petersburg/Clearwater, resulting in the airline adding an additional 55,000 seats this summer from the airport. On 5 November, the carrier will introduce a fifth route to Orlando Sanford.