Regional connectivity in Italy, Spain and Turkey analysed; winners and losers between 2009 and 2015 revealed 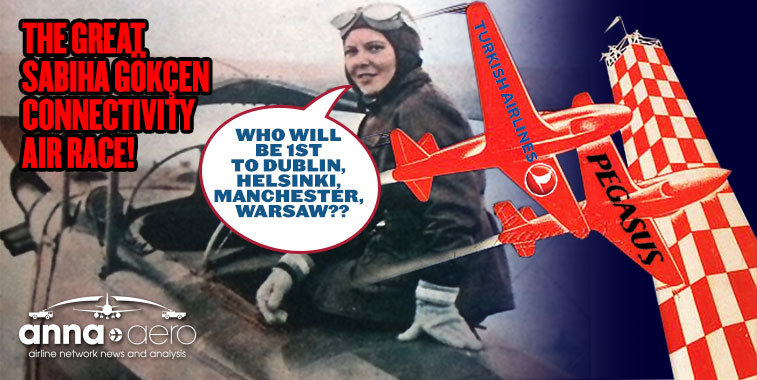 Where else in the world can you find two airports named after a father and daughter? Sabiha Gökçen, the world’s first female combat pilot, and adopted daughter of Atatürk, is also the given name of Istanbul’s young and booming second airport. Just four routes to prime cities separate Sabiha Gökçen International Airport from Connectivity Victory.

Back in May we updated some analysis we had previously done on the connectivity to major European cities from regional/secondary airports in France, Germany and the UK. This not only showed their current connectivity, but also highlighted which routes had started since 2009, as well as any that had disappeared. Now we take a look at the other three major European air travel country markets; namely Italy, Spain and Turkey – the remainder of the FIGUST countries.

As a reminder, the figures in the tables are the number of weekly frequencies as scheduled for the first week of August 2015 according to OAG Schedules Analyser data. Greyed out cells represent a lack of flights both now and in August 2009. Cells shaded bright green (with a number in them) indicate routes that are now flown, but which were not flown back in 2009. Red cells represent routes that were flown in 2009 but are not operating in the first week of August this year.

Across the nine Italian airports analysed there are plenty of green cells, with 32 city pairs now connected that did not have service six years ago and only five links dropped. Palermo is the biggest gainer with nine new connections, with Bari, Bologna and Catania each gaining five new links (though Bari and Bologna also both lost one). Catania has now achieved a ‘full house’ with links to all of the major European cities in our target list. Milan Malpensa and Venice Marco Polo are both agonisingly close to a ‘full house’, but Malpensa is still missing a Geneva link, and Venice is still waiting for a Warsaw link (though this may be filled by LOT Polish Airlines starting in January 2016). The missing link in 2009 to Stockholm has now been filled (by both Norwegian and SAS), but service to Budapest has been lost. 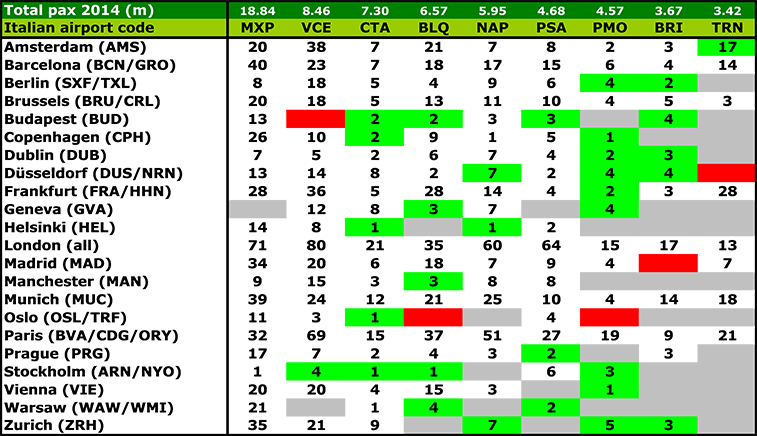 Among the nine Spanish airports analysed there have been 27 new city pair connections with just four losses. Malaga and Palma de Mallorca maintain their connectivity to all of our target airports, with Alicante almost joining them. Alicante has gained its previously missing Budapest and Rome services, but has lost its link to Prague.

Bilbao is the biggest winner since 2009 with new direct flights to nine of our target airports. In 2009 Bilbao was connected to just seven of the major European cities in our basket of routes; now it is 16. Amsterdam, Milan, Munich, Paris and Rome are now connected to all nine of the Spanish airports analysed, which was not the case back in 2009 when Brussels, Dublin, Düsseldorf, Frankfurt and London were the only cities with direct flights to all of our Spanish airports. 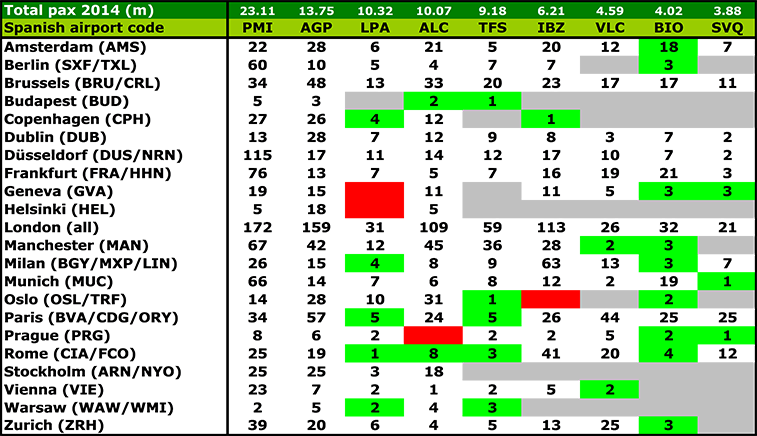 Izmir and Istanbul Sabika Gökçen come closest to a ‘full house’ with non-stop flights to 20 of the 24 European cities in our target list. Izmir has gained connections to nine airports in the last six years, with Istanbul’s second airport increasing its portfolio by eight new routes. Despite handling well over 4.5 million passengers in 2014, Adana’s non-stop links to major European cities are restricted to less than daily flights to four destinations in Germany. As a result Düsseldorf, Frankfurt and Munich are the only cities with non-stop flights this summer to each of the seven Turkish airports analysed.

Despite Ankara being the capital of Turkey there are currently no direct flights to its airport from Brussels, London, Paris or Rome. It is also the only Turkish airport with fewer connections to these major European cities (just nine are now served) than it had back in 2009 (when it had 10). 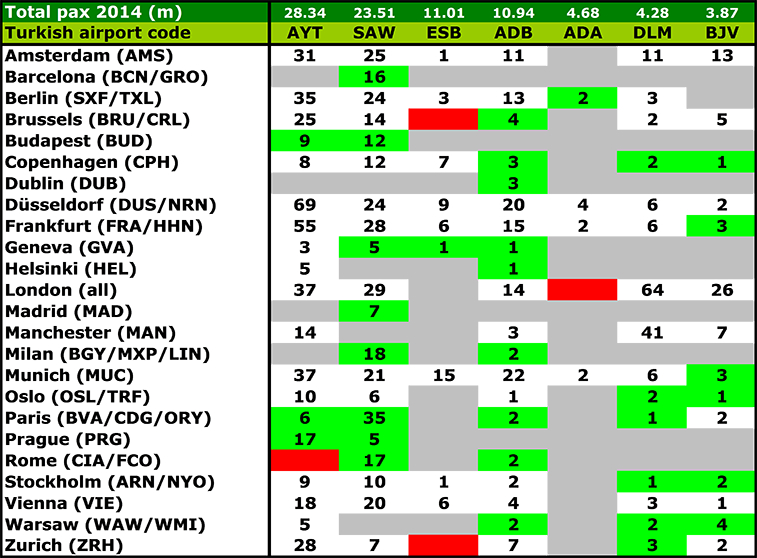 The launch of flights to Prague (on 19 June 2014) and Budapest (on 16 July 2014) by Pegasus Airlines has helped Istanbul Sabiha Gökçen to have direct connections to 20 of the 24 major European airports in our analysis. Only Dublin, Helsinki, Manchester and Warsaw flights are now missing from the airport’s portfolio of routes.