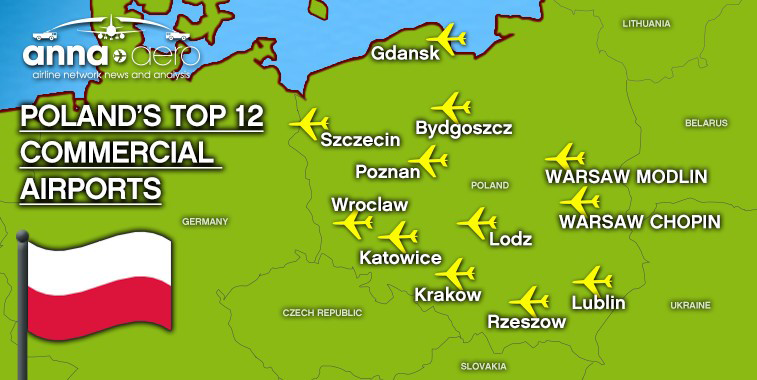 Poland in S15 is served by 12 commercial airports, with airline operations to Radom Airport (the 13th) commencing in September. The country has seen an exceptional rate of growth in the last 12 months, resulting in most airlines adding seat capacity to the country, with a combined increase in seats for S15 totalling 11%.

Poland is home to approximately 39 million people, making it the sixth most populated country in Europe, and it makes up around 3% of the EU’s overall GDP. It is one of anna.aero’s favourite places to visit, especially the famous Wieliczka Salt Mine near Krakow. Since it was discontinued as a mine in 1996, it has become the world’s largest underground cathedral, full of chapels and statutes carved out of the salt by the miners. Coincidentally, anna.aero will be back in Poland next year as Krakow will be the host city of Routes Europe 2016, taking place between 24 and 26 April. In total for S15, Poland has 12 commercial airports with airline operations, and in September Radom will become the 13th. 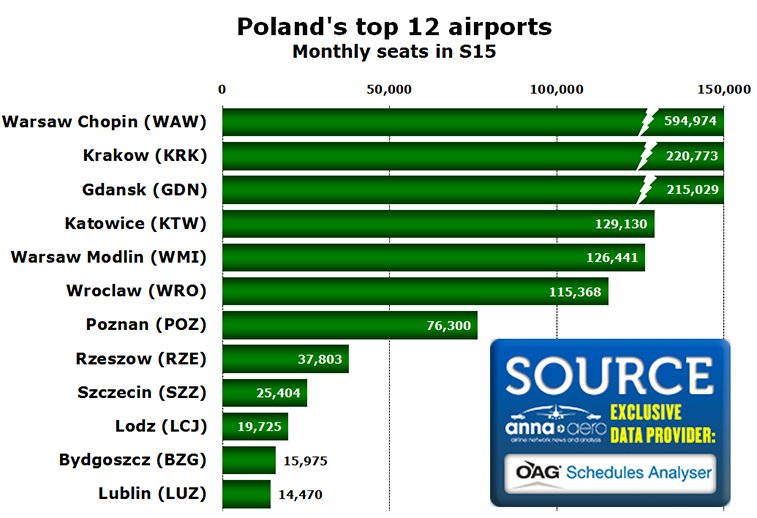 Warsaw Chopin is the number one airport in relation to seat capacity and passenger traffic, with a total of over 10 million passengers passing through the facility in 2014. However it is fellow city airport Warsaw Modlin that has been the strongest performer of the top 12 Polish airports. The airport commenced commercial operations in 2012, and after a few issues with the runway that resulted in a temporary closure, the facility reopened again in September 2013, and nearly two years later it is the fifth largest airport in Poland relating to monthly seat capacity. The airport is also the seventh fastest growing Ryanair airport in S15, seeing weekly departures increase by 60 flights when compared to S14. This also makes it the fastest growing airport for the airline in Poland.

What can also be seen from the table is that Gdansk Airport is catching up with Krakow Airport in relation to capacity. In 2014, Gdansk witnessed an increase in passenger traffic of nearly 15%, whereas Krakow only managed a rise of 4.7%. For the first six months of 2015, Gdansk is witnessing an average monthly spike in passengers of approximately 16%, while Krakow’s is just under 11%. Although both are exceptional growth rates, anna.aero predicts that if the trend for both airports continue, Gdansk will overtake Krakow to become Poland’s second busiest airport by the end of 2015.

Which LCC will be first to Radom

Radom is the newest airport in Poland, with a terminal capacity capable of handling 600,000 passengers a year. When speaking to anna.aero at Routes Europe hosted by Aberdeen back in April, Jacek Kobus, Commercial Manager for Radom Airport highlighted that: “Poland is the biggest market in central Europe with no low-cost airline of its own. Our strategy is to attract a feeder carrier, preferably a low-cost airline.” Since saying this, the airport has been successful in gaining a feeder airline, and in September a total of three carriers will be commencing operations, starting with airBaltic on 1 September to Riga, while Czech Airlines will initiate services to Prague on 18 September, allowing passengers to feed into the SkyTeam member’s global network.

Although the airport has been successful in attracting two different airlines to commence operations next month, the airport is still looking for its first LCC. With Ryanair and Wizz Air being the largest low-cost airlines operating from Poland, its most likely that one of them will be the first to commence low-cost operations from the facility. However with both also operating services from airports in Warsaw and Lodz, Radom could be too close to the current catchment areas, leaving it possibly for a new LCC to enter the market. If either did decide to commence operations, anna.aero predicts that the first destination for either carrier would be London, due to the strong capacity share that London has in the UK market from Poland as analysed below, and also as the UK is the number one country market. 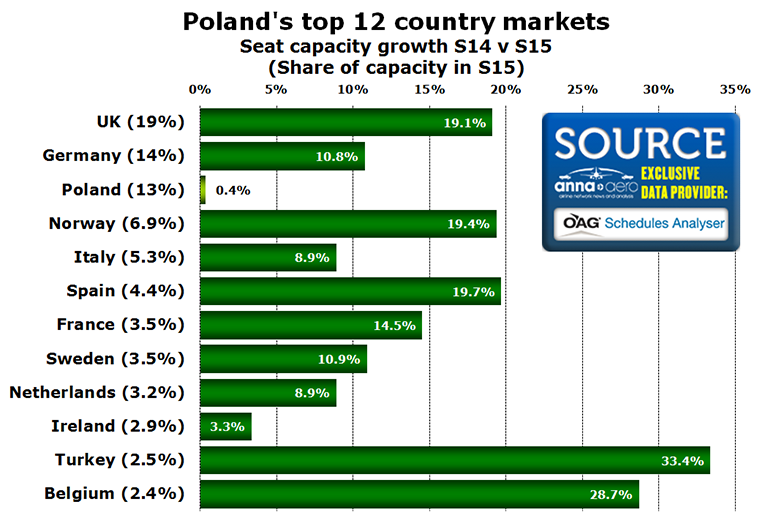 Once again, as it did in 2014, the UK commands the top 12 country markets from Poland in S15, taking up 19% of the overall available seat capacity. Of the top 12, the domestic market (highlighted in light green) showed the smallest increase in capacity of 0.4%. Out of the 42 country markets that are served from Poland, 13 are showing declines in capacity. The worst performing country market is Egypt (40th most popular country from Poland in S15) which is showing an overall reduction in seats of -199%, meaning a total loss of just under 5,000 seats per month. At the other end of the spectrum, the fastest growing market is Iceland, where seat capacity is up 58%, helped by the recent launch of services by Wizz Air from Gdansk to Reykjavik/Keflavik on 19 June. Other countries showing a capacity growth of above 30% are Portugal (51%), Slovenia (41%), Cyprus (37%), Turkey (33%) and Malta (31%).

The UK still remains the number one country market from Poland, and has seen an increase in seat capacity of 10% in the past 12 months. In 2015, a total of 73 airport pairs will be available between the two countries. The table below shows a detailed breakdown of the capacity distribution between Poland and the UK.

As we can see from the table, the number one connected city in Poland to the UK in relation to seat capacity is Warsaw, with the combination of Chopin and Modlin airports accounting for just over 25% of the market. However when it comes to destinations being served, Krakow is the number one connected city, having a total of 12 UK destinations in its route portfolio. From the UK, London Stansted is the best connected airport, with Ryanair being the sole carrier on the UK-Poland market from the facility. It operates services to 11 Polish airports. Stansted also has the biggest slice of capacity in the market, although London Luton is only 0.4% behind, or approximately 1,000 seats per month. It is worth noting though that only 9.4% of capacity in the market is operated by full service carriers, while the rest is controlled by the four LCCs of Ryanair, Wizz Air, Norwegian and Jet2.com. What is also interesting is that London’s Heathrow and Gatwick airports, the two biggest in the UK, only have services to two Polish airports, and Gdansk, the second largest airport in Poland in relation to UK seat capacity, does not have a service to either. This shows the domination of LCC’s in the market and the importance that Luton and Stansted play in connecting the UK capital to the Polish regions.

Highlighted in light green in the table are the new airport pairs that are planned to start before the W15/16 season, all of which will be operated by Wizz Air. The LCC has recently broken the Polish route monopoly of Ryanair from Bristol by launching twice-weekly services from Katowice, and on 14 September the LCC will also break the Ryanair monopoly also present at Birmingham. It will launch a twice-weekly service to Warsaw Chopin, a route that has not been served since bmibaby ceased operations. 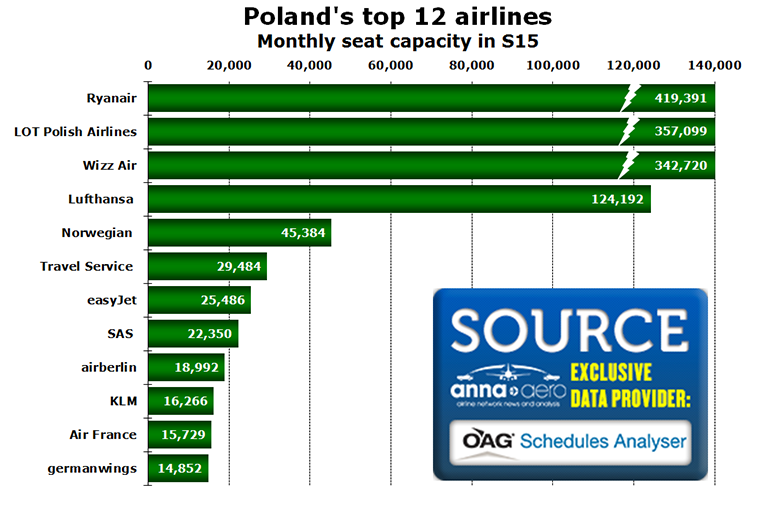 Ryanair has overtaken national carrier LOT Polish Airlines to become the number one airline operating from Poland. The ULCC is reporting a seat capacity increase of 11% compared to the same corresponding period of last year. Nonetheless, LOT (down -4.2%) will be commencing an expansion programme from its main hub at Chopin in W15/16, which will see the airline introduce services to Athens, Barcelona, Beirut, Belgrade, Chișinău, Cluj-Napoca, Ljubljana, Nice, Tokyo Narita, Venice Marco Polo, Zagreb and Zurich. As a result, this expansion could possibly see LOT return to the top spot, however with Ryanair now being number one, it may take the opportunity to further expand operations from the country to remain in that position.

Apart from LOT, the rest of the airlines that make up the top 12 have all reported growth for S15, with Norwegian showing the strongest increase in seat capacity of 26% when compared to last year. A new airline to enter the top 12 is germanwings. The two factors contributing to this are that it is showing an increase in seat capacity of 7.1%, and also it enters the top 12 due to the demise of eurolot (fourth in S14), which ended operations in March. 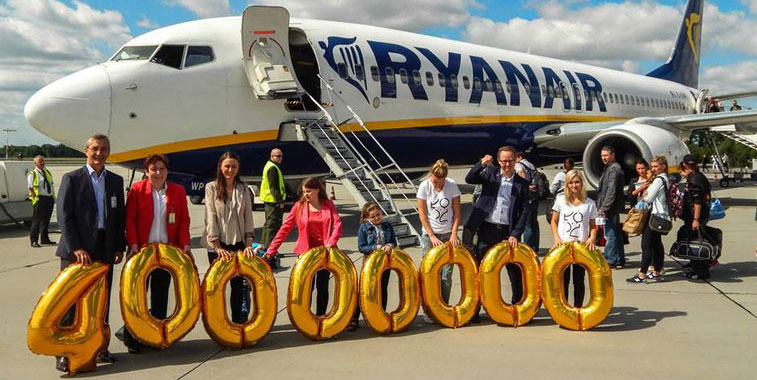 On 30 July, Ryanair celebrated the milestone of passing 40 million passengers from Poland at Lodz Airport. For S15, the ULCC is showing an increase in seat capacity of 11% when compared to the corresponding period of last year. The result means that Ryanair is the largest airline operating in Poland this summer.