Gold Coast Airport has celebrated new international routes in the last 12 months with Jetstar Airways to Fiji (March 2015) and New Zealand (Wellington and Queenstown in December 2014). The airport has handled almost 880,000 passengers on international flights in the 12 months ending May 2015.

Latest government statistics show that demand for domestic air travel in Australia has declined by 0.8% to 57.3 million passengers in the year ending May 2015. The country’s international air travel sector showed rather healthier growth, up 4.6% to 33.7 million in the same period. Double-digit international growth was reported in March 2015, with the re-timing of Easter being a likely contributing factor.

Among the country’s top 10 domestic routes, six reported growth in the year ending May 2015 (the latest available data), with Melbourne-Hobart (+4.6%) leading the way. Melbourne-Perth, the country’s sixth busiest domestic route, has experienced a 2.9% reduction in demand, while passenger numbers on the Sydney-Perth route (the eighth busiest) were down 2.0%. With over 8.4 million annual passengers, the Sydney-Melbourne route remains by far the country’s busiest air route (and one of the busiest in the world), and grew by 2.1% in the last 12 months. 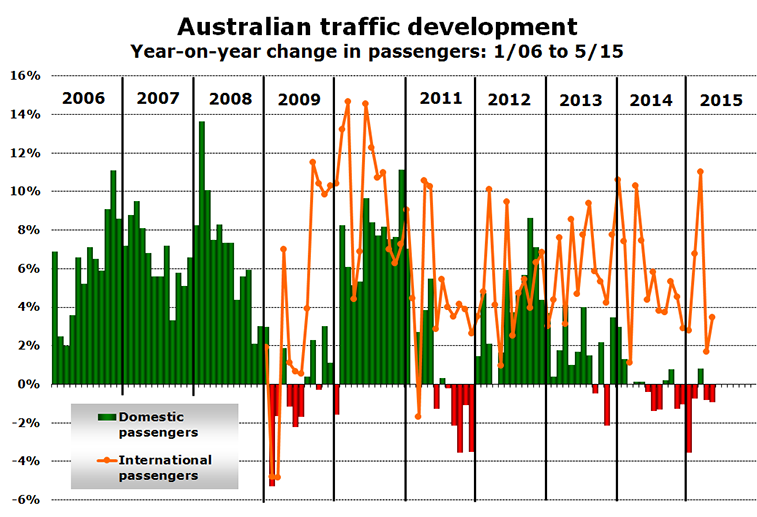 For the year ended May 2015, international traffic was up 4.6%. Sydney leads the way with 13.5 million passengers (up 2.0%), followed by Melbourne with 8.4 million (up 9.9%) and Brisbane with 5.1 million (up 6.7%). Perth reported 3% growth to almost 4.2 million, while Adelaide reported 7% growth to almost 950,000. Since March 2009, international traffic has grown year-on-year every month with the solitary exception of March 2011. Significant new international services launched in the last 12 months to/from Australia include:

According to the latest BITRE figures for May 2015, Qantas has just 16.1% of the international market followed by Emirates (10.3%). Qantas’ low-cost subsidiary Jetstar Airways is in third place with 9.6% followed by Singapore Airlines with 8.7%. Combining Qantas and Jetstar Airways still gives the Qantas Group of airlines only just over one-quarter of the Australian international market.