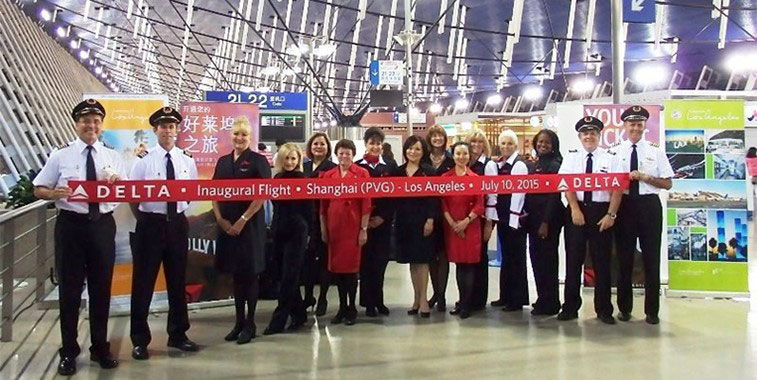 On 9 July, Delta Air Lines launched services from Los Angeles to Shanghai Pudong, making it the fourth carrier to commence operations on the 10,412-kilometre sector alongside American Airlines, China Eastern Airlines and United Airlines. The market to China in 2015 has grown 37% when compared to last year, allowing the country to overtake Japan in relation to available seat capacity.

Los Angeles Airport, more famously known as LAX, has been the setting for many celebrity A-listers arriving into Hollywood. As it is currently half-way between award seasons, it seems fitting that the airport and its airlines get the ‘Oscars treatment’ before the buzz of who will win the coveted movie prizes begins, because without them, celebrities would be unable to get to the red carpet at all and give their awe-inspiring winner’s speeches. In 2014, the Californian hub welcomed over 70 million passengers, making it the fifth busiest airport in the world in relation to passenger traffic according to ACI. With new carriers such as Ethiopian Airlines adding extra routes to the airport’s existing portfolio this year, this figure is expected to rise further in 2015. 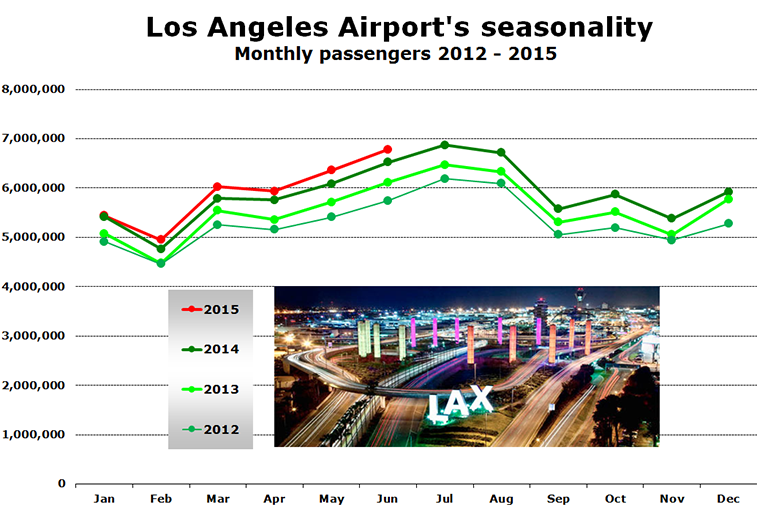 For the first six months of 2015, LAX has reported an average growth rate of 3.2% when compared to the figures witnessed in 2014, with May recording the biggest increase of 4.3%. The result means that so far in 2015, LAX has welcomed an extra 1.1 million passengers. If this rate remains consistent throughout the remaining six months of this year, LAX’s annual passenger traffic figure total will fall just short of the 73 million mark.

LAX has recorded a SVID score of 1.14 which is (“Excellent”). The result means that LAX places 14th out of the 50 plus airports analysed so far in 2015 (using 2014 monthly figures), falling between Guadalajara and Spokane. In comparison, the Californian hub has performed better than its northern state rival San Francisco which is showing a score of 1.28, also (“Excellent”). To gain a better understanding of the Los Angeles County market, a comparison with Burbank Bob Hope was also carried out. Although the airport is 95% smaller than LAX, Bob Hope achieved a score of 0.30 based on its 2014 traffic figures, which is an (“Excellent”) score also, but indicates that the traffic is more consistent throughout the year than LAX’s. 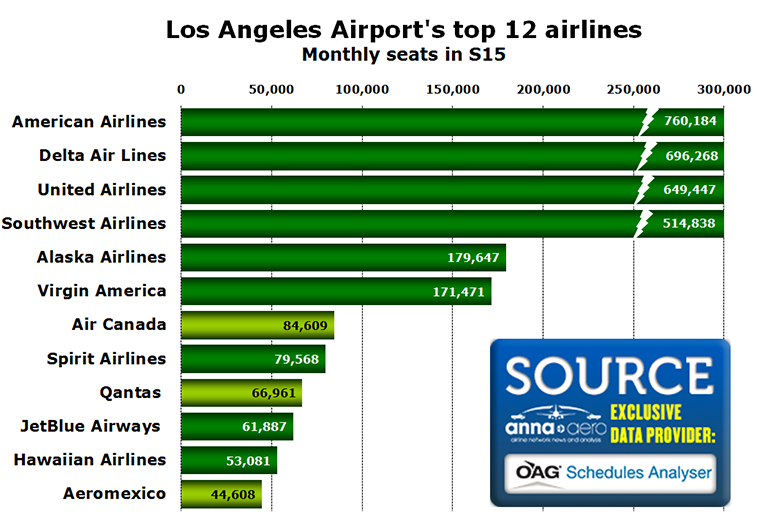 “And the Oscar for the largest carrier goes to…”

American Airlines is the number one carrier out of LAX in S15, helped in part by its merger with US Airways, meaning that Delta Air Lines and United Airlines will have to perfect their ‘happy to just be nominated’ face after falling to second and third places respectively. This means that the top three carriers at LAX are also representing the top three airline alliances of oneworld, SkyTeam and Star Alliance. When looking at the carrier mix from an alliance point of view at LAX, Star is number one, with the alliance having a total of 15 airlines serving LAX, which when combined occupy 24% of seat capacity. SkyTeam is second with 11 carriers commanding 22% of seat capacity, while oneworld is third with just under 22% of capacity with seven airlines representing the alliance. 32% of the remaining capacity is made up of non-alliance member airlines, although Emirates has the well-known Skywards programme.

Of the airport’s top 12 airlines, only three are non US carriers (highlighted in light green), with Qantas being the only one in the top 12 to not be a North American airline. American will grow its lead further in 2015, with the carrier currently planning to launch services to Mexico City on 3 September, Tokyo Haneda on 15 October and finally Sydney on 17 December. With this planned growth, American has the capability of doing a ‘Tom Hanks’ and win the award in back-to-back years (Tom Hanks won the Academy Award for Best Actor in 1993 and 1994 for his respective roles in Philadelphia and Forrest Gump). 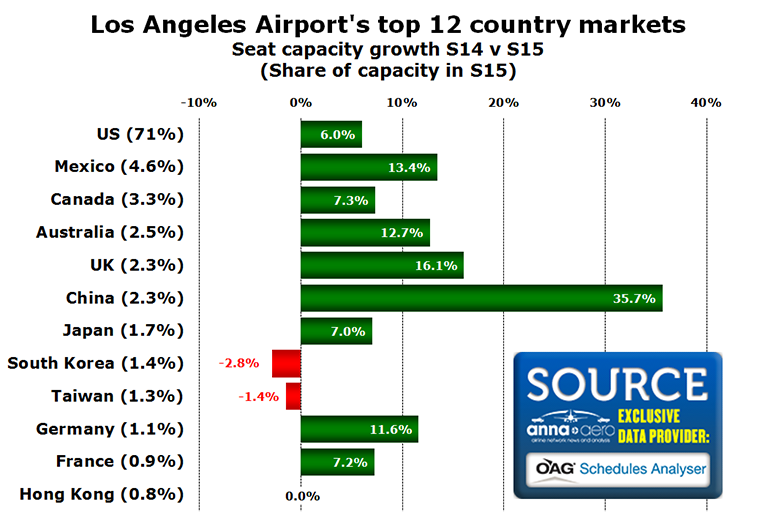 Overall in S15, seat capacity is up 7.3% from Los Angeles. When looking at the top 12 country markets, the biggest headline is that China has now overtaken Japan to become the biggest country market in Asia from the Californian hub. What can also be identified is the strong capacity increases being seen in the European market, with the UK, Germany and France all showing strong growth. Overall, services to Europe witnessed an increase in seat capacity of 12% when compared to the same time period of last year, helped by the introduction of Ireland as a country market, with the launch of Ethiopian Airlines’ service from Addis Ababa to Los Angeles that routes via Dublin. Elsewhere, the North American market is recording a growth of 8.9% when compared with S14, while Asia (the largest market outside of North America) is up 11%. Australasia is reporting a growth of 10% in seat capacity, and South America is showing an increase of just 1.7%. Finally the Middle East market is up 4.9% when compared with S14, while Africa is a new market for LAX according to OAG Schedules Analyser, introduced to the airport by the launch of Ethiopian’s service from Addis Ababa. Surprisingly, although LAX has a strong network to Asia, it does not yet have a direct service to India, one of the fastest areas in the world currently for aviation. Given that the distance between LAX and Delhi is 12,852 kilometres, it is a market that is able to be reached directly, as Emirates will launch services from Dubai to Panama City on 1 February, an airport pair that is 13,797 kilometres apart. 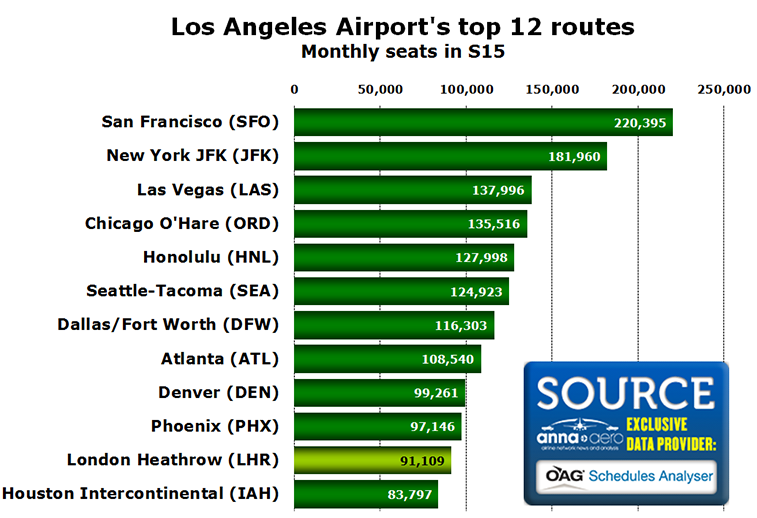 As can be seen in the table above, London Heathrow (highlighted in light green) is the only airport in the top 12 that is an international destination, and also witnessed a seat availability increase of 14% when compared to S14, making it the fastest growing of LAX’s top 12 routes. In comparison to Heathrow’s top 12 finish, fellow London Gatwick Airport is the 107th most popular route from LAX in relation to seat capacity. From May next year, Manchester will become the third UK gateway made available from LAX, with Thomas Cook Airlines launching its first services to the Californian hub using its A330-200s.

All of the top 12 routes from LAX remain exactly the same when analysed against the same corresponding time period of last year, however the order in which the routes fall has changed. Chicago O’Hare has overtaken Honolulu to gain fourth position, helped by an increase in seat capacity of 9.4%. Other changes include Seattle-Tacoma overtaking Dallas/Fort Worth, helped by the former airport witnessing a seat increase of 13%, unlike DFW which has seen seat capacity decrease by -0.9% (1,000 seats) when analysed against August 2014. The average growth rate of LAX’s top 12 routes in the past 12 months in relation to seat capacity is 6.9%. One route that could show a decline in seat capacity next year is New York JFK as a result of United ending services from the latter airport in October. 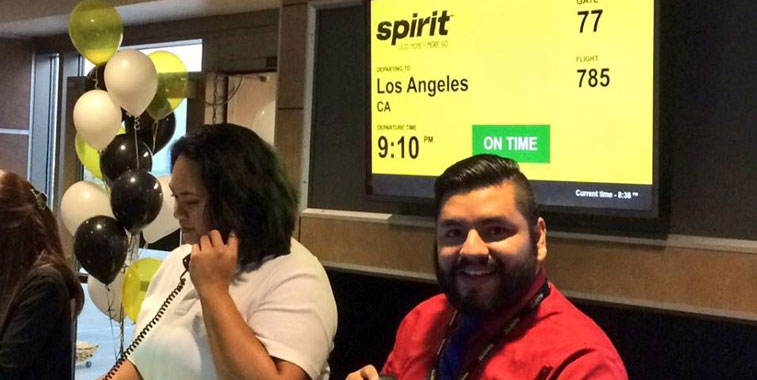 On the 9 July, Spirit Airlines launched services from Los Angeles to Baltimore/Washington and Kansas City. From 20 August, the carrier will also launch services to Atlanta according to OAG Schedules Analyser data.