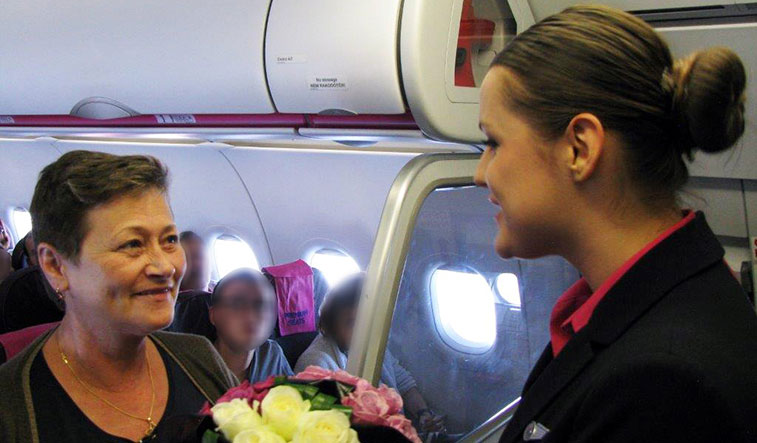 On 11 August, Wizz Air celebrated five million passengers at Cluj-Napoca (also known as Cluj Avram Iancu International Airport ‒ named in honour of the revolutionary Transylvanian lawyer), since it started serving the airport in 2007. The lucky passenger was Romanian native Eugenia Rus, who was travelling to Milan/Bergamo. The airport is expected to handle around 1.5 million passengers in 2015.

Situated in the north-west of the country, around 450 kilometres (roughly a six-hour drive) from the capital Bucharest, Cluj-Napoca is Romania’s second biggest city. As a result, the city’s airport (also known as Cluj Avram Iancu International Airport ‒ named in honour of the revolutionary Transylvanian lawyer) is the second largest in the south-east European country, handling over 400,000 annual passengers more than third-ranked airport Timisoara. Currently the airport has a 25-route network, all of which are found in Europe, with the exception of Tel Aviv. 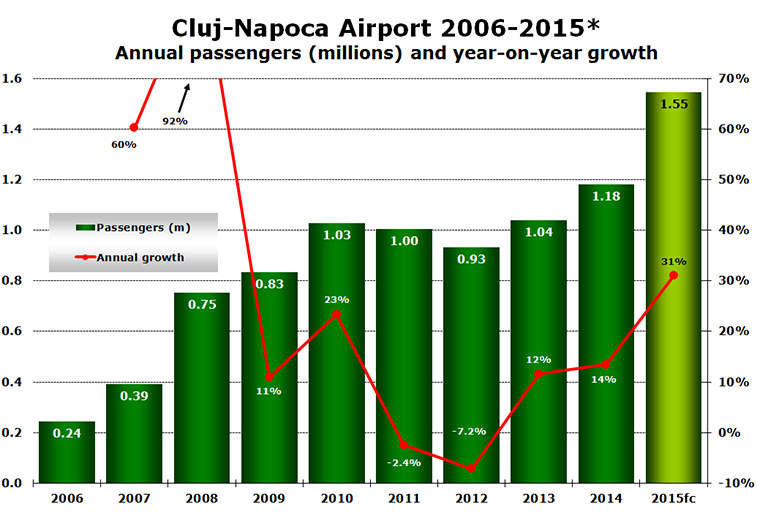 Cluj-Napoca’s growth explosion really began in 2007, with the arrival of Wizz Air. The ULCC began operations in December 2007, with a four-airport initial network which included Budapest, London Luton, Rome Fiumicino and Barcelona, all served thrice-weekly. Since that date the airline has gone on to handle five million passengers through Cluj-Napoca, flying to 21 destinations this August. The airport is having a bumper 2015, with an average monthly growth rate of 31% in the first six months of the year. If these types of monthly increase persist throughout 2015, anna.aero forecasts that the airport will break the 1.5m annual passenger barrier. It is also growing slightly faster than Timisoara, which has averaged over 28% growth in the first five months of 2015.

Entering Cluj-Napoca’s monthly passenger data for 2014 into anna.aero’s Seasonal Variation in Demand (SVID) calculator, the airport performs well, generating a score of 5.51 ‒ a ‘Good’ rating. Evaluating it alongside the most significant competing Romanian airports, our data elves also ran SVID calculations on Bucharest (4.05 – ‘Good’) and Timisoara, which generated an ‘Excellent’ result (1.61). All three airports share their respective quietest months (February), with the busiest months being August for Cluj-Napoca and Bucharest, and September for Timisoara (but only by 150 passengers. The seasonal lows for the three airports represent 52% (Cluj-Napoca), 55% (Bucharest) and 70% (Timisoara) of their respective seasonal highs.

With 31% annual growth in capacity at Cluj-Napoca it is easy to see why Wizz Air is the dominant player. The ULCC holds 72% of all seats at the airport in S15, up from around 65% in S14. While Lufthansa has remained static year-on-year, national carrier TAROM, which flies to the capital city and Vienna from Cluj-Napoca, has increased its offering by 4.1%. The #4 carrier, Corendon Airlines is flying 28% more seats in S15 than it did last August. 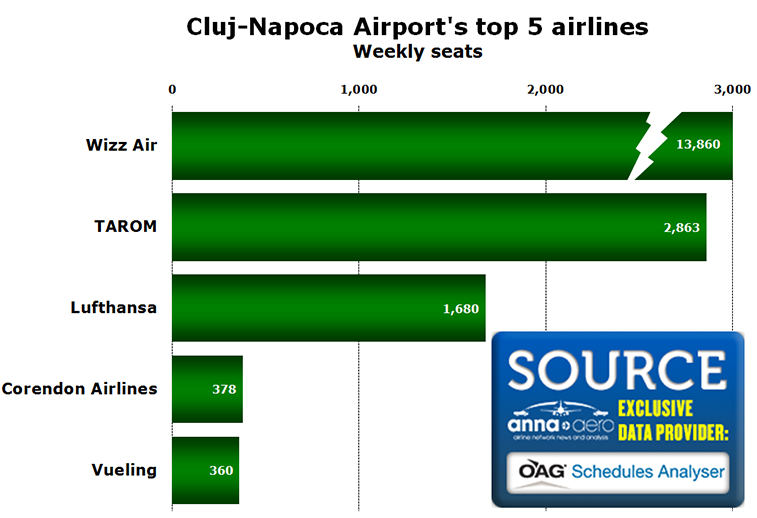 Vueling is the only serving airline at Cluj-Napoca to reduce its commitment to the airport, culling 50% of its S15 weekly capacity when compared to the amount it flew a year ago. Having offered twice-weekly flights to both Barcelona and Rome Fiumicino in S14, the Spanish LCC has dropped its service to the Italian capital this year, perhaps as a reaction to the 33% increase that Wizz Air has implemented on the airport pair to Rome Ciampino. Blue Air which operated to Cluj-Napoca in S14, with a weekly service to Antalya, no longer serves the Romanian airport.

With by far the largest annual increase in weekly seats versus last August (+56%), #2 sector London Luton is poised to overtake Bucharest (which only grew by 4.7%) as the top route at Cluj-Napoca, missing out this summer by just three seats. Capacity to Milan/Bergamo registered the second most significant increase this year in comparison to S14, with a 40% spike noted on the airport pair (up from 900 weekly seats). Wizz Air operates on all but two (not Bucharest or Munich) of the airport’s top 14 routes, and on 11 of those remaining 12 it has a monopoly position in terms of weekly seats (routes where the ULCC does not have 100% of seats are highlighted in light green). On the sector it shares with Vueling – Barcelona – it still has the lion’s share of capacity, offering 71% of total capacity. 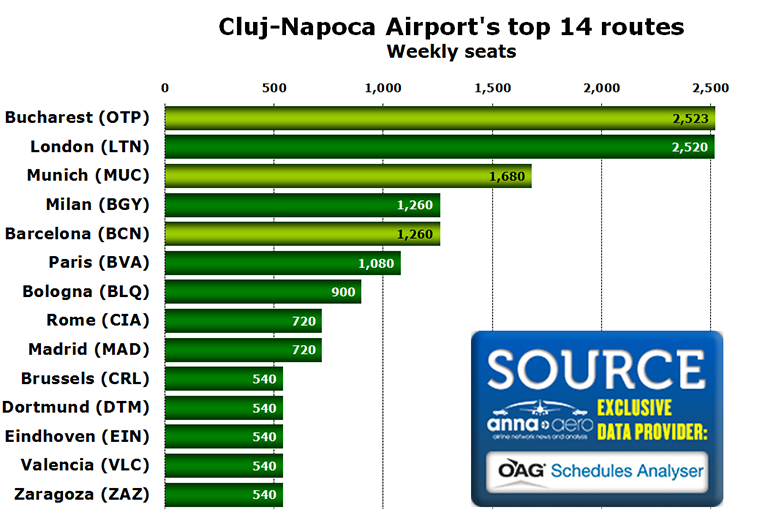 The top 14 routes shown in the graph represent 80% of all weekly seats at Cluj-Napoca. Only one route in the top 14 posted negative growth, with services to Dortmund down 25% year-on-year, dropping from four times weekly to just three. Seven of the routes, including the airport’s only hub connection with Lufthansa to Munich, delivered the less-than-dynamic 0% annual growth figure.

To date, there are two new routes on the cards for Cluj-Napoca for the remainder of 2015 or 2016, the first being the launch of twice-weekly services by Wizz Air to Dubai Al Maktoum on 19 December. Into the New Year and LOT Polish Airlines is anticipating making a return to the airport, with a four times weekly, Q400-operated connection to Warsaw Chopin planned. 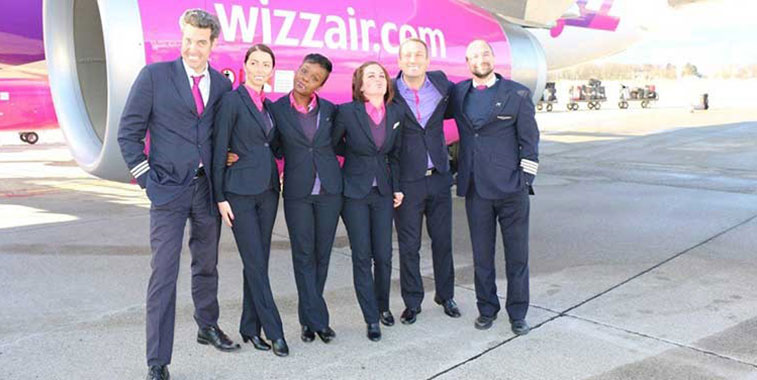 A route to get your teeth into. Wizz Air introduced the 1,347-kilometre sector between Cluj-Napoca and Geneva on 21 December last year, a city pair served twice-weekly. This new route helped the airline increase its weekly seats by 31% at the Romanian airport in S15 versus the previous summer.