El Al to return to Miami and Chicago following 787 order 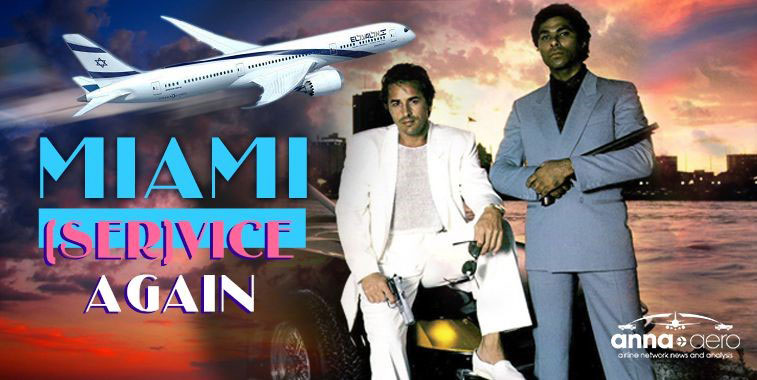 For those of you that can remember January 2013, anna.aero correctly predicted that Emirates would launch services to Stockholm Arlanda (launched September 2013), Boston (launched March 2014) and Chicago (launched August 2014) using this image (but with an Emirates aircraft of course). As the MEB3 carrier is yet to launch a Miami service (perhaps our story forced Qatar Airways into launching its own service in June 2014), we thought we could use the image again for El Al, which will use some of its recently-ordered 787s to re-open services to the US city.

Miami and Chicago will be at the top of El Al’s new route shopping list following its recent order for up to 28 787-8s and 787-9s (15 firm and 13 options), with deliveries commencing in 2017. This decision will not be that much of a surprise, as both routes were previously flown by the carrier ‒ with one-stop operations to Chicago suspended in April 2007, and direct and one-stop flights to Miami culled in August 2008 (according to OAG Schedules Analyser).

On the deal, El Al’s CEO David Maimon said: “During the next five years, these aircraft shall replace the 747-400 and 767 fleets and are designated to fly to medium and long-haul destinations (New York, Boston, Toronto, Bangkok, Beijing, Mumbai, South Africa and more).” Well David, our data elves are only too happy to help fill in the gaps for you in terms of your own airline’s network knowledge. The following table details the current flying programmes for El Al’s 767-300s, 747-400s, and perhaps pertinently for the delivery options, its 777-200s.

The airline currently has six 767-300s and seven 747-400s, so even if the new 15 aircraft replace the existing 13 aircraft like-for-like, there will be two aircraft left over to begin new routes – namely the re-start of Miami and Chicago operations ‒ or to commence the replacement of the airline’s six 777-200s. With only 19 aircraft to replace and 28 potentially on order, there still remains a lot of scope for further network development at El Al over the next few years.

Assuming that a return to Miami and Chicago are both on the cards ‒ where else would the airline consider flying? El Al’s existing network offers 42 global destinations – with the majority in Europe (five of which are operated by low-cost subsidiary Up), along with the previously-mentioned five in North America, four in Asia and one in Africa. Top of the prospective list of other new destinations being suggested on various websites and blogs for the new aircraft are San Francisco, or indeed San Jose, both in California and both being previously unserved. New South American points appear to have been written off, as well as another point in China like Shanghai, particularly as Beijing is only served thrice-weekly at the moment, with the carrier’s smallest piece of long-haul capable kit (767-300s). Asia hasn’t been shut-out of any future plans for the future 787 fleet entirely, with the likes of Phuket or Chiang Mai being tipped as possible new routes. 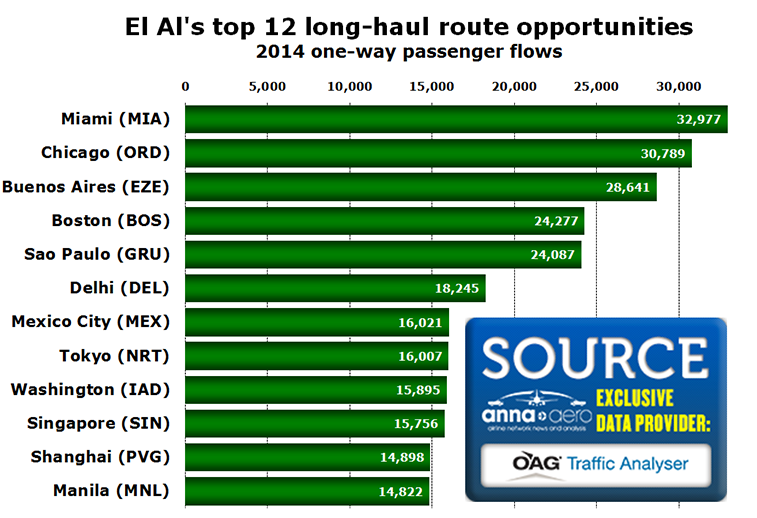 When using OAG’s Traffic Analyser tool to determine the top 12 unserved network points from Tel Aviv in 2014 it is perhaps not surprising (and a bit relieving for our data elves) to find both Miami and Chicago in spots one and two. Perhaps more intriguing is the fact that #4 route Boston, which in 2014 was unserved, but on which a thrice-weekly service was commenced in June of this year, was selected by El Al over the other two US points. It is interesting to also point out that many of these long-haul opportunities were also present in the overall top O&D unserved routes, with Casablanca (in #6) being the only short- or medium-haul opportunity within the top ranked cities.

While Chiang Mai (#26) and Phuket (#59) do feature in this ranking of potential routes, they are both easily beaten by the one-way passenger flows to Tokyo, Singapore, Shanghai and Manila. San Francisco and San Jose are well outside the top 100, with the likes of Washington Dulles (#10), Las Vegas (#15) and Atlanta (#18) in the US all offering substantially more traffic in terms of the 2014 results. Perhaps a triangular route from Tel Aviv to Buenos Aires (#3) and Sao Paulo (#5) with a 787 will also be an option despite opinions that routes in South America are low-yielding and full of backpackers. Wherever El Al decides to fly next with its new long-haul kit, after Miami and Chicago, anna.aero will bring you the network development news first. On 28 June this year, El Al launched its latest US destination from Tel Aviv, this time to Boston. The thrice-weekly service will soon be flown using the carrier’s freshly-ordered 787-8s and 787-9s.