On 2 August, South African Airways launched its first North American destination from Accra to Washington Dulles. The service, which originates in Johannesburg, has contributed an additional 45% in terms of seat capacity from the Ghanaian capital this summer, making it the only airport in the Star Alliance member’s top 12 airports to report growth.

South Africa is a very unique country as it’s the only one in the world (excluding Antarctica) to have coastlines on both the Indian and Atlantic oceans. Lying at the tip of the African continent, the country’s largest city, Johannesburg is home to over four million people, representing approximately 9% of the population. With this fact, it is no surprise to see that the country’s national carrier, South African Airways (SAA), has a majority of its available seat capacity on domestic services, so it is able to connect Johannesburg with the remaining 91% of the population. One of the airports on the airline’s route network that will be getting a large influx of additional passengers next month is Durban, as it gets ready to stage the World Routes Conference, hosted by Province of KwaZulu-Natal at the Durban International Convention Centre between 19 – 22 September. 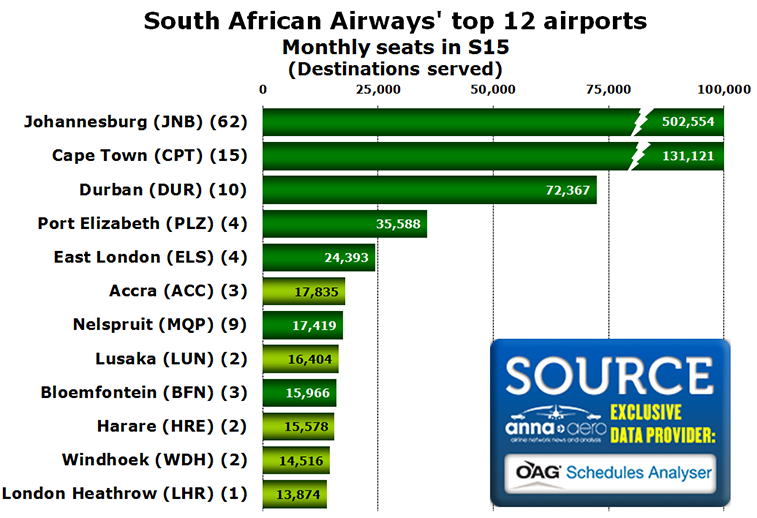 With Johannesburg being the largest city in South Africa, it is of no surprise to see that SAA has centred its operations at the hub, which occupies 44% of the Star Alliance member’s available seat capacity in S15, and has non-stop connections to 62 airports this summer, of which 19 are domestic. Of the five international airports that make it into the carrier’s top 12 airports (highlighted in light green), Accra has witnessed that largest growth in seat capacity, seeing an increase of 45%. Like Harare (-5.4%), Windhoek (-0.8%) and London Heathrow (-3.9%), the rest of the airports in the top 12, except Lusaka (+0.1%), are all showing declines in seat capacity when compared with S14, with Bloemfontein showing the largest decrease in seat capacity of -48%. South African Airways three largest airports, Johannesburg, Cape Town and Durban, are reporting an average decline in seat capacity in S15 of 7% when compared with S14. 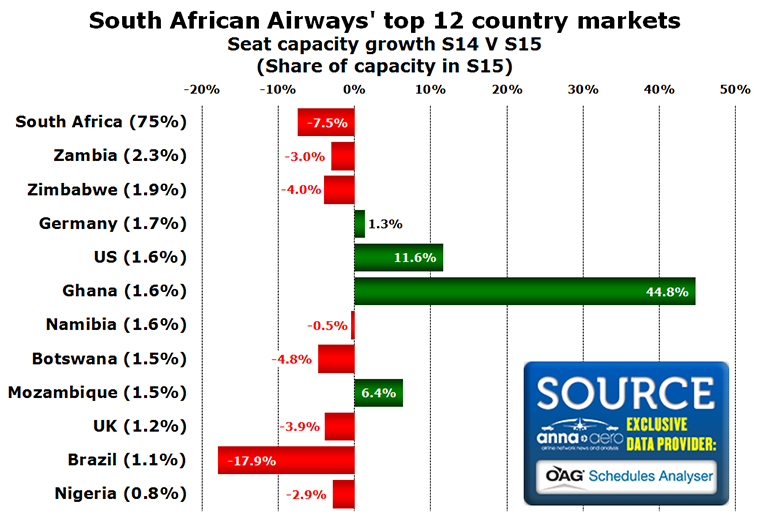 As shown in the graph above, Ghana has seen the biggest seat capacity growth when compared to the same time period last year, helped by the launch of services from Accra to Washington Dulles. The most popular European market is Germany, which is reporting an increase in capacity of 1.3%. SAA serves both Frankfurt and Munich airports from Johannesburg, however London Heathrow is the most popular European route despite it witnessing a seat capacity decrease. Although not in the top 12, Mauritius (16th most popular) achieved a respectable growth rate of 13% when compared with S14, as did the Democratic Republic of Congo (+14%). The newest country market added to the airline’s portfolio is UAE. The Star Alliance member launched services to Abu Dhabi on 29 March, operating on a daily basis using the airline’s A330-200s. 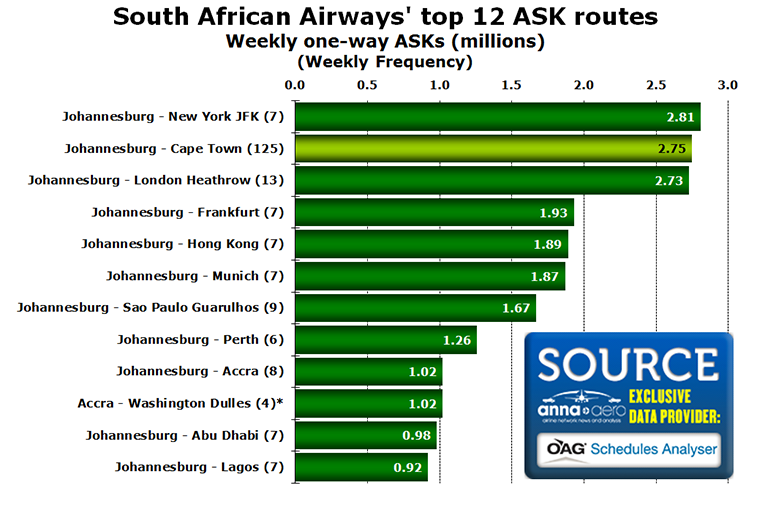 As it was in 2014, New York again leads the top 12 routes for ASKs. The result means that the airline’s most popular route in terms of seat capacity (highlighted in light green) comes second in terms of the top 12 for ASKs. It is impressive though to see that the domestic link between Johannesburg and Cape Town has made it into the top 12 at second place, although this is helped with the sector seeing 125 weekly flights according to OAG Schedules Analyser data. New to the top 12 is the recently launched service between Accra and Washington Dulles that places in 10th spot, just ahead of the new service connecting Johannesburg and Abu Dhabi in 11th, illustrating the development being seen in the airline’s long-haul network. 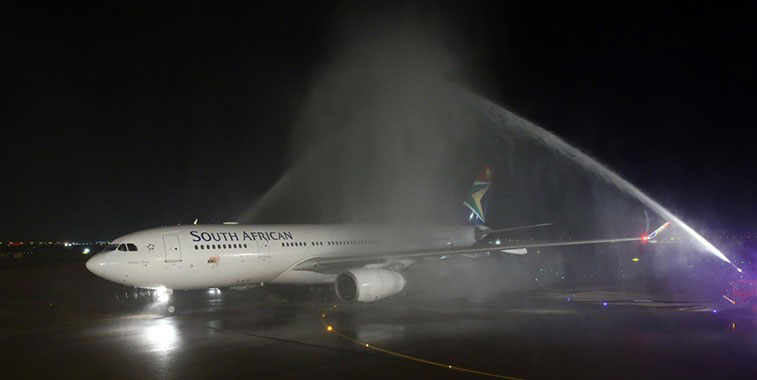 On 29 March, South African Airways was greeted with a water arch salute upon arrival at Abu Dhabi Airport as the Star Alliance member launched its daily A330-200 service from Johannesburg.