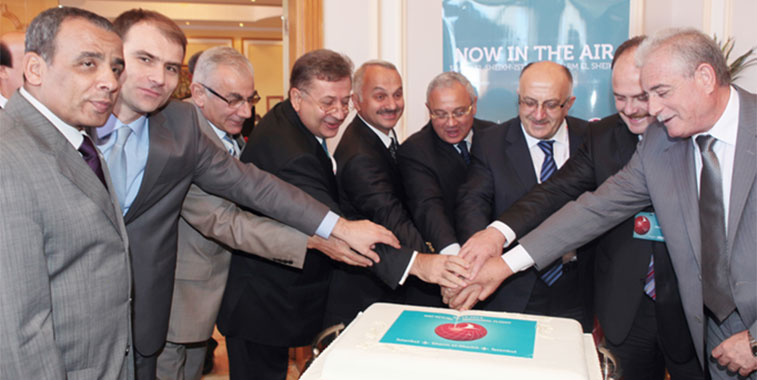 After launching services to Sharm El Sheikh and Hurghada in 2013, Turkish Airlines has grown quickly in the Egyptian market, and last year the Star Alliance member outperformed all of the MEB3 carriers in relation to seat capacity growth (Turkish Airlines 20%, Qatar Airways 18%, Etihad Airways 16% and Emirates 8.3%).

Egypt, nestled at the north-eastern tip of the African continent, has one of the world longest timelines when it comes to the history of man, and now the country is home to approximately 90 million people according to Egypt’s Central Agency for Public Mobilisation and Statistics. The nation’s pyramids are one of the great wonders of this world and are visited by thousands of people each year. Of course if you do not live in Egypt, the best way to get to see these historic icons is to fly-in, and in 2015 there is a choice of up to 11 commercial airports to fly to. 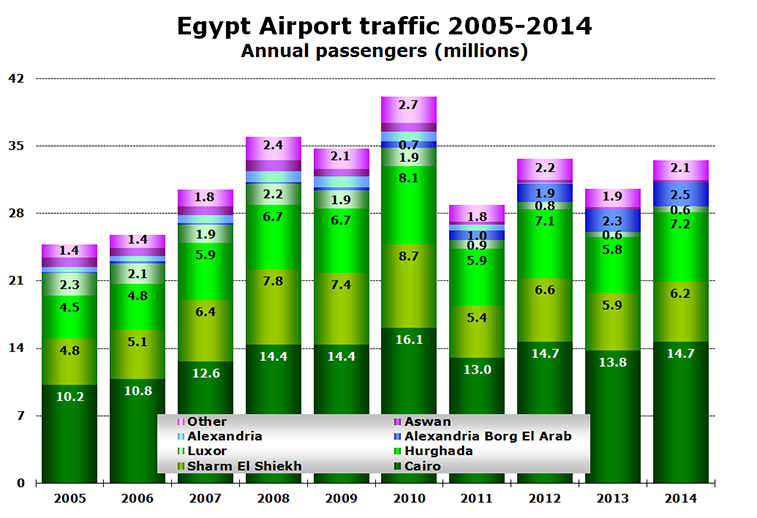 Alexandria Borg El Arab, which became the principle airport to serve the city of Alexandria after the city’s original airport Alexandria International was closed for renovation (and re-opened in September 2014 with limited operations), has recorded the best growth of all Egyptian airports in the past nine years. Since 2005, Borg El Arab has seen passenger numbers climb by 96%. The second fastest growing airport of the past nine years in relation to passenger traffic is Hurghada (38%), while Cairo came third (31%). Apart from Alexandria being closed, the worst performing airport is Luxor, which has seen passenger figures fall by 74% since 2005. Over the past nine years, despite the well-publicised political and economic turmoil, passenger traffic from Egypt has grown 26%, with a total of nearly 34 million passengers using the 11 commercial airports in 2014. With an average growth rate of 2% over the time period analysed, anna.aero predicts that Egyptian airport traffic will pass the 34 million benchmark by approximately 200,000 passengers in 2015, which will only happen of course if this trend of average growth continues. Nonetheless the country is still seven million passengers behind the 40 million milestone it passed in 2010. 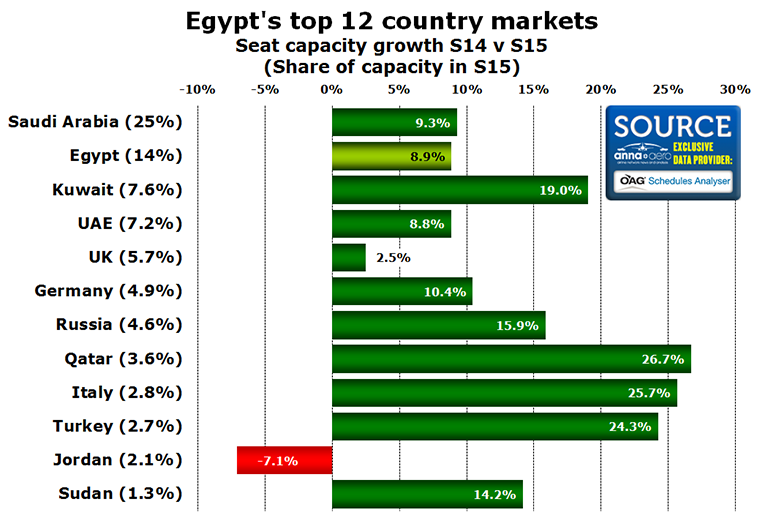 After reporting a growth of 19% when compared to S14, Kuwait has overtaken the UAE (up 8.8%) to become the third most popular country market from Egypt. Another change to the top 12 is the disappearance of Libya, which has dropped from eighth in 2014 to 16th in 2015 after showing a seat capacity decrease of 69% according to OAG Schedules Analyser data. Other changes in the top 12 include Qatar climbing to eighth position from ninth last year, due to the decline being seen in the Libyan market. Italy places ninth in 2015 when compared to the 11th spot it occupied last year, while Turkey climbs to tenth spot from 12th, helped in part by Turkish Airlines increasing capacity between Turkey and Egypt by 20% when comparing year-on-year figures (as shown further below).

As it was in 2014, Saudi Arabia is still the number one country market from Egypt, resulting in the domestic market placing second (highlighted in light green). In 2015, a total of 26 city pairs will be available between the two countries. The table below shows a detailed breakdown of the capacity distribution between Egypt and Saudi Arabia for S15. 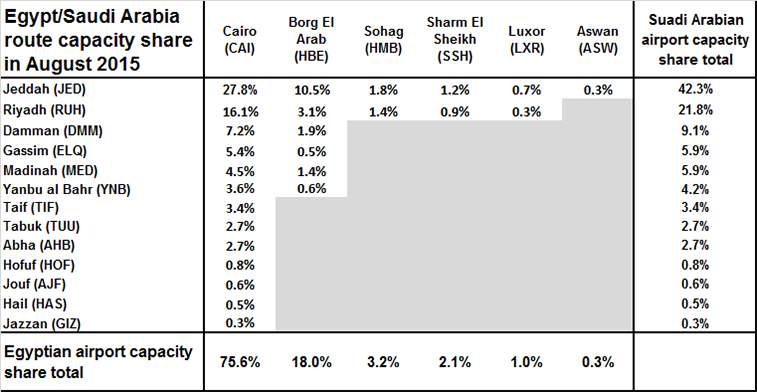 As we can see from the table above, the number one city connected with Saudi Arabia from Egypt is Cairo, which holds a majority of nearly 76%. In comparison, the best connected destination in Saudi Arabia is Jeddah, although it only has a 42% share of the market. What is very visible from the table however is that Egypt’s third largest Airport, Hurghada, does not have a service to any Saudi Arabian destination. However this may be due to the airport being a popular destination for European holidaymakers. If a link was to be started from Hurghada to Saudi Arabia, anna.aero predicts that it will be to Jeddah, due to its popularity and strong connectivity to Egypt. 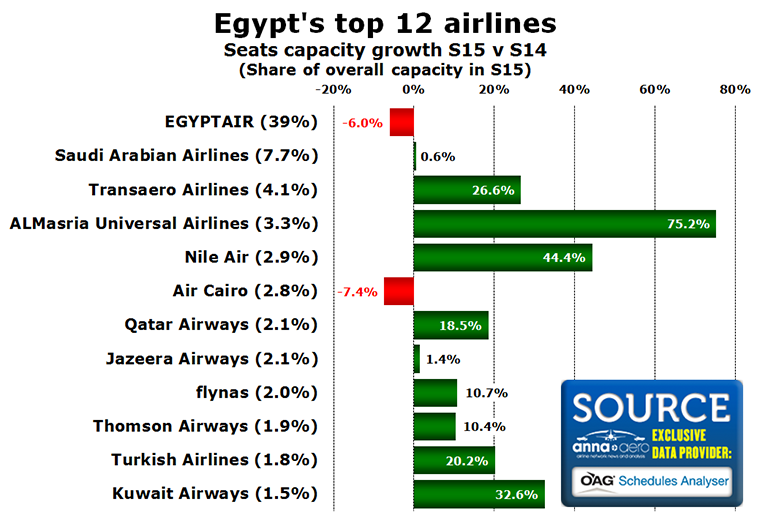 Although national carrier EGYPTAIR still holds the majority of seat capacity out of the nation, it is one of only two carriers in the top 12 to report a decline in capacity against S14, with the other being fellow Egyptian airline Air Cairo. Despite this decline, EGYPTAIR still offers over 500,000 additional seats a month than second place carrier, Saudi Arabian Airlines, which has just over 134,000 seats on offer per month, distributed among the 11 city pairs it operates between Egypt and Saudi Arabia. Of the 11 sectors the airline offers between the two countries, the airport pair of Jeddah and Cairo has the greatest share of the available capacity offered by the airline (44%).

Overall, the top 12 airlines achieved an average growth over the past 12 months of 19%, while at the other end of the spectrum, of the airlines that served in S14 and still are in S15, the worst performance for seat capacity growth was delivered by Afriqiyah Airways. The Libyan-based operator is reporting a decline in capacity of -79%. Apart from ALMasria Universal Airlines, which is showing a growth in seat capacity of 75%, the only airline coming close to this figure of growth is Nesma Airlines in 15th spot. The Egyptian carrier is reporting a growth of 67% when compared with last year.

Turkish growing faster than the MEB3

One of the most competitive rivalries at the moment in the aviation industry is the challenge laid down by Turkish Airlines to the dominance of the MEB3 in the global hub and spoke market. Within Africa, Turkish is indeed the best-connected airline in relation to the non-stop destinations served when compared to the MEB3 – 29 versus Emirates (20), Qatar Airways (17) and Etihad Airways (eight) according to OAG Schedules Analyser. In Egypt, this trend is also being seen in destinations served. Turkish operates services to four Egyptian airports which are Cairo, Borg El Arab, Hurghada and Sharm El Sheikh. Qatar Airways serves three destinations (Cairo, Hurghada and Luxor), while Etihad and Emirates both only serve Cairo. Turkish grew its capacity to Egypt by 20% this year when compared to S14, beating fellow MEB3 carriers Qatar Airways (18%), Etihad (16%) and Emirates (8.3%). It is worth noting though that Emirates’ sister airline, flydubai, grew capacity on its service between Borg El Arab and Dubai by 28% over the past 12 months. However, despite Turkish offering the biggest growth of the four carriers, it is still in second place behind Qatar Airways, which offers over 5,000 extra seats a month to its Doha hub than Turkish’s Istanbul Atatürk capacity. 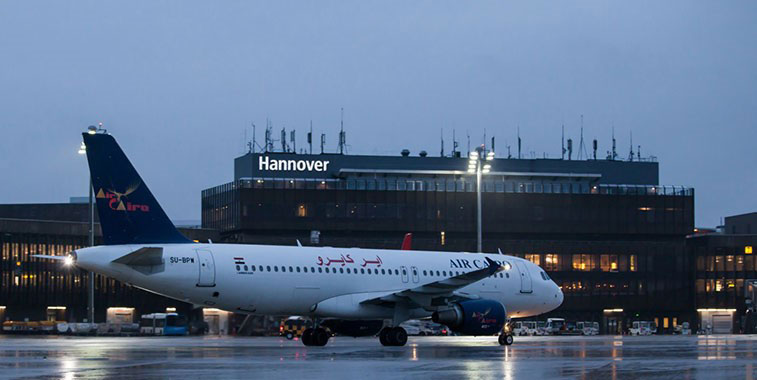 On 3 May, Air Cairo touched down at Hannover Airport with twice-weekly (Thursdays and Sundays) flights from Hurghada. Air Cairo this summer is reporting a decrease in seat capacity of -7.4% from its home nation, while Germany is showing a 10% rise in seat capacity availability according to OAG Schedules Analyser data.