Dutch part of Transavia dominated by routes to Spain; new services to Germany and Cyprus celebrated in 2015 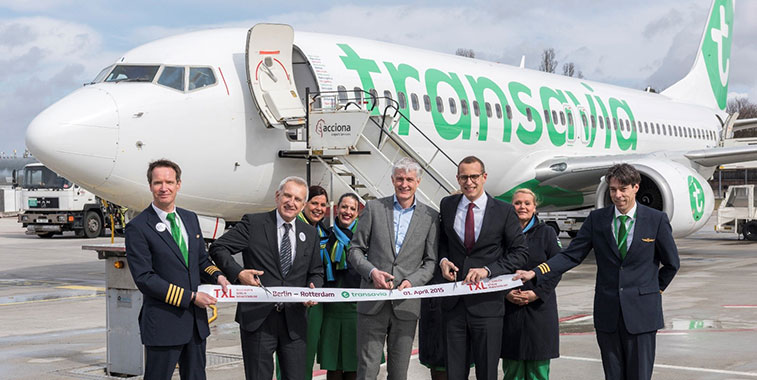 On 1 April 2015, Transavia launched a new route from Rotterdam to Berlin Tegel. Celebrating the departure of the first flight (HV 5708) back to Rotterdam from Berlin were: Roland Wondolleck, Airport Director, Rotterdam Airport; Mattjis ten Brink, CEO, Transavia Airlines; and Johannes Mohrmann, Airline Marketing, FBB. The flight was operated by one of the airline’s 737s in the new corporate livery that was adopted by the Air France KLM subsidiary earlier in the year. (Source: © Günter Wicker / Flughafen Berlin Brandenburg GmbH)

Air France KLM’s in-house low-cost subsidiary, Transavia, operates under two separate codes. The Dutch-based airline has HV as its code, while the Paris-based operation has TO as its IATA designator. While the French part of the business has plans to grow its fleet from 14 to 40 aircraft by 2020, the Dutch part is seeing relatively modest growth. In 2014, the two carriers handled 9.9 million passengers, of which the Dutch part was responsible for 6.8 million, an increase of around 5% on the previous year. In the first seven months of 2015, according to Air France KLM traffic statistics, Transavia (both parts) has carried 6.1 million passengers (an increase of 9.8%) at a load factor of almost 90%.

Scheduled seat capacity for Transavia (HV) grew significantly between 2010 and 2014, though this is somewhat misleading. The airline’s growth was actually much slower during this period but a significant part of its operations were charter flights which have gradually been phased out, or converted to scheduled services. This transition appears now to be almost complete and scheduled seat capacity in 2015 is actually expected to fall slightly, by around 2%. 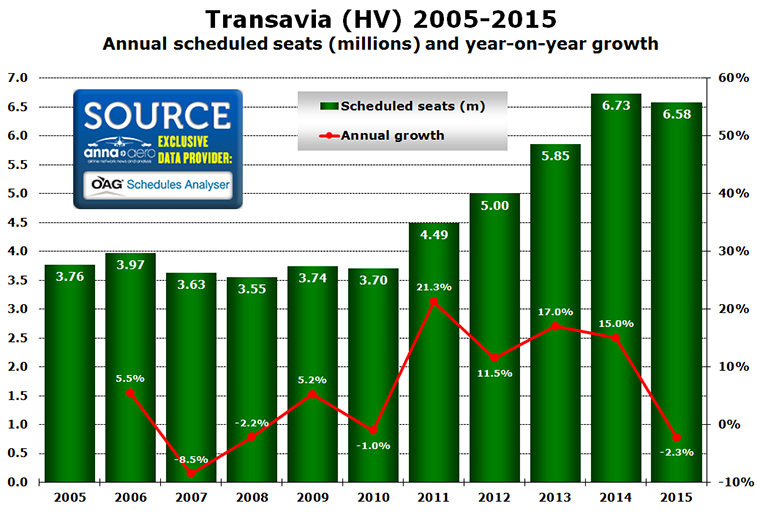 As a European leisure airline Transavia (HV) suffers from significant seasonality as can be seen from the scheduled monthly seat capacity graph below. As a result, aircraft and crews are often leased out to other airlines during the winter season. Comparing 2015 with 2014, most of the capacity cuts for the year appear to have taken place during the first quarter of the year. 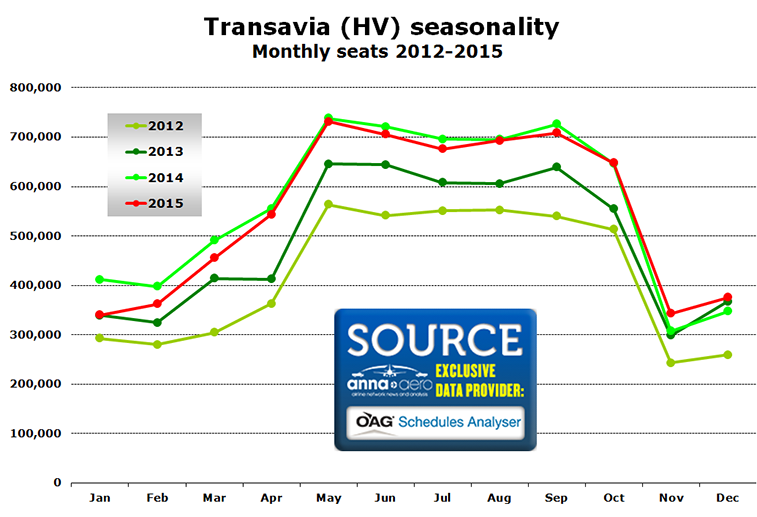 In the first week of September, Transavia (HV) is operating 461 departures from its Dutch airports; 250 from Amsterdam, 108 from Rotterdam, 92 from Eindhoven, eight from Groningen and three from Maastricht Aachen. In total 54 destinations are served from Amsterdam, 20 from Rotterdam and 18 from Eindhoven. According to the latest Air France KLM annual report, Transavia as a whole has nine 149-seat 737-700s and 37 189-seat 737-800s. Earlier this year 20 737-800s were ordered to support Transavia’s rapid growth in France and development in the Netherlands. 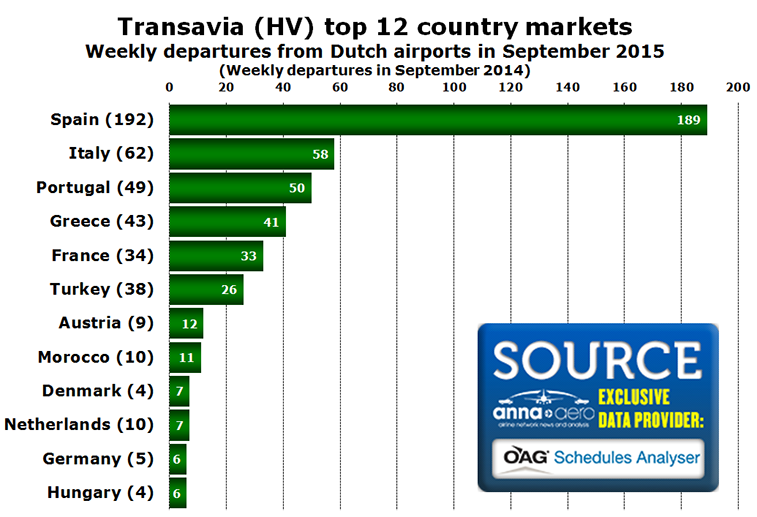 Unsurprisingly Spain is by far the biggest country market for Transavia (HV) this summer accounting for 41% of flights, more than three times the size of the next biggest country market, Italy. The number of flights to most country markets is very similar to what was performed last year, though Turkey has seen a significant reduction from 38 scheduled flights per week to just 26. Routes that have been removed from the airline’s schedule since last summer include: Amsterdam and Rotterdam to Istanbul Sabiha Gökçen; Eindhoven to Berlin Tegel, Madrid, Naples and Venice; and Rotterdam to Prague and Valencia.

Possibly the most significant all-new service launched by Transavia (HV) in 2015 was a six times weekly service from Rotterdam to Berlin Tegel. The German capital airport has been served by the airline from Amsterdam and Eindhoven in the past, while back in 2004 and 2005 Transavia (HV) operated to Berlin Schönefeld from Rotterdam. 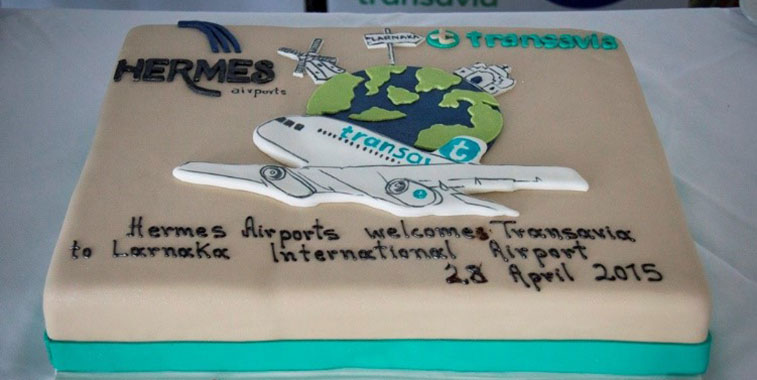 On 28 April Larnaca Airport in Cyprus welcomed the return of Transavia. The new service from Amsterdam then operates on to Paphos in Cyprus.