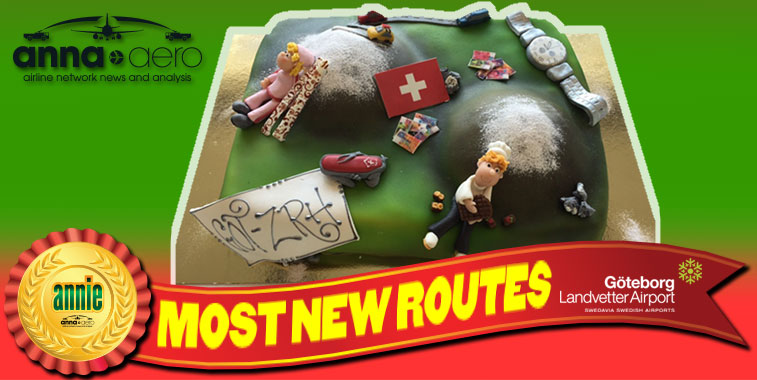 Ok, so the airport benefited from its downtown rival closing for commercial flights, but Gothenburg Airport didn’t just rely on relocated Ryanair and Wizz Air flights to win the ANNIE award for the airport with the most new routes. Legacy carriers such as SWISS (with a new service to Zurich) also contributed to the Swedish airport growing its network portfolio from 37 to 59 routes.

A little bit later in the year than usual (anna.aero’s data elves have been really overworked this summer) we can now reveal the winners (and runners-up) in anna.aero’s sixth Annual Euro ANNIES awards. Based purely on analysis of passenger traffic data and schedule data, these scientific awards are all about what the airports and airlines have actually achieved. For the airport traffic growth data we use our own database of annual (and monthly) passenger traffic data for over 350 airports across Europe. For those awards given to airports and airlines relating to their network growth we have analysed OAG schedule data for the first week of August 2015 and compared it (where appropriate) with the first week of August 2014. Strictly speaking we are not calculating the number of new airlines/routes etc, but the biggest net gain during the last 12 months, to take into account airlines and routes that may have disappeared for whatever reason.

In total we have 14 awards; 10 for airports and four for airlines. With a three-way tie in one category we therefore have 16 winners in total. These are spread across 10 countries. Turkey (with four), Greece (with three) and Germany (with two) have multiple winners, with Armenia, France, Poland, Russia, Serbia, Spain and Sweden all generating additional winners. Other countries represented among the runners-up are Denmark, Finland, Iceland, Italy and Moldova.

So, drum roll please, and the first award goes to …

Gothenburg Airport in Sweden has won this award, helped by the virtual closure in January 2015 of nearby Gothenburg City Airport, which resulted in several carriers (notably Ryanair and Wizz Air) shifting all their flights to the bigger airport. However, Czech Airlines, SAS and SWISS have also added new routes to and from Gothenburg, and this has resulted in the airport’s network growing by 22 routes during the last 12 months. Runner-up in this category is Rhodes, one of Greece’s most popular summer leisure destinations, with a net increase of 21 destinations this summer. This summer, Gothenburg has welcomed the launch of SAS’ seasonal flights to Dublin (on 11 April) and Czech Airlines’ service to Prague. Gothenburg City Airport closed to commercial flights in mid-January, and as a result of which Ryanair and Wizz Air transferred their networks to the bigger airport. We just love all the cakes (and the cute characters on them) that have clearly been produced for Gothenburg Airport from the same bakery.

In this category, the definition of a long-haul route is a flight of over 4,500 kilometres originating from the European region. OAG data suggests that there are 77 airports in Europe with at least one route that satisfies this criteria. While Frankfurt (97) and Paris CDG (95) lead the way with the most long-haul destinations served non-stop, the winner of the award for the biggest net increase in such routes is Istanbul Atatürk, which has seen its long-haul network grow from 36 to 40 routes. Not surprisingly, Turkish Airlines is responsible for all this growth having launched non-stop service to Manila (30 March), Taipei Taoyuan (31 March), San Francisco (13 April) and Jakarta (11 May). Runner-up in this category is Budapest. The Hungarian capital gained three new long-haul service to Beijing (with Air China), and Montreal and Toronto Pearson in Canada (with Air Transat and SkyGreece Airlines respectively). On 31 March, Turkish Airlines launched flights from Istanbul Atatürk to Taiwan, followed less than two weeks later by a route to San Francisco in California. Turkey’s busiest airport now has non-stop flights to 40 long-haul destinations (defined as those that are at least 4,500-kilometres long).

Airport with the most new carriers
Winner: Santorini; Runner-up: Billund

The impressive growth in leisure traffic to Greece has helped Santorini Airport win the award for the biggest net increase in airlines, with nine. New airlines at the airport this summer include Alitalia, Ellinair, Germania, Germania Flug and Ryanair. The Irish ULCC began daily flights to Athens on 1 April, increasing to double-daily from 2 June.

Billund is runner-up in this category. The Danish airport has had a net increase of eight airlines in the last 12 months, despite losing Air Lituanica when that airline ceased all operations. New carriers have included airberlin (from Berlin Tegel), Brussels Airlines (from Brussels), Czech Airlines (from Prague), Wizz Air (from Gdansk) and WOW air (from Reykjavik/Keflavik). Billund Airport has welcomed several new flag-carriers and LCCs in the last 12 months. On 29 March, Czech Airlines began service from Prague while on 19 June, Wizz Air arrived from its base in Gdansk.

Airport with most scheduled airlines
(the anna.aero Spotters Award)

Having grabbed the title from Rome Fiumicino last year, Paris CDG retains this award with a total of 108 scheduled airlines this August, well clear of second-placed Frankfurt with 94 and Rome Fiumicino with 85. Amsterdam has leap-frogged London Heathrow into fourth place with 82 airlines versus 81 at Europe’s busiest airport. Paris CDG coped with the loss of several carriers during the last 12 months (such as Air Lituanica, Air One, Cyprus Airways, Darwin Airline and eurolot) but also welcomed new carriers such as Air Astana (29 March from Astana), bmi regional (27 April from Bristol), Hainan Airlines (3 September from Xi’an) and Iberia (29 March from Santander). 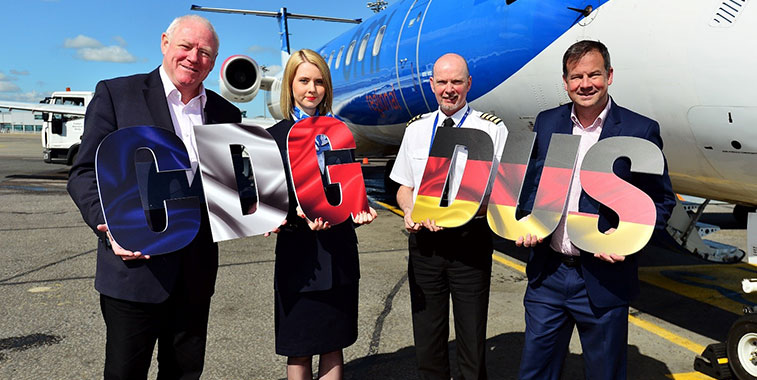 At the end of April bmi regional began serving Paris CDG from Bristol with its Embraer ERJs. This was the airline’s first service to CDG and helped the French airport maintain its grip on the anna.aero Spotters Award for most scheduled airlines.

Thanks to anna.aero’s comprehensive, free, downloadable database of airport traffic statistics which includes well over 350 airports across Europe, we have been able to identify the fastest-growing airports in 2014 in pure passenger terms in six different size categories. The award in the biggest category (>10 million passengers) goes to Istanbul Sabiha Gökçen (growing by over 25% year-on-year) which also won this category last year. That’s now three years in a row that an airport serving Istanbul has won this award. Greek airports had a good 2014, with Thessaloniki winning the 5-10 million category (with growth of 22%) and Athens, Chania and Kalamata all claiming the runner-up spot in their respective categories.

Possibly sensing an opportunity as a result of airberlin’s on-going network restructuring, Germania has been extremely busy developing its scheduled network during the last 12 months and wins this category easily. According to OAG schedule data the German leisure airline now operates over 150 scheduled routes (with an average weekly frequency of less than two flights per week) compared with just over 50 last summer. Runner-up in this category for the second year in a row is Vueling, which was beaten last year by germanwings. The Spanish LCC has added over 70 new routes in the last 12 months, notably from its main base in Barcelona (from where it now operates non-stop to over 140 destinations), but also from Rome Fiumicino, where it now operates on over 50 routes. 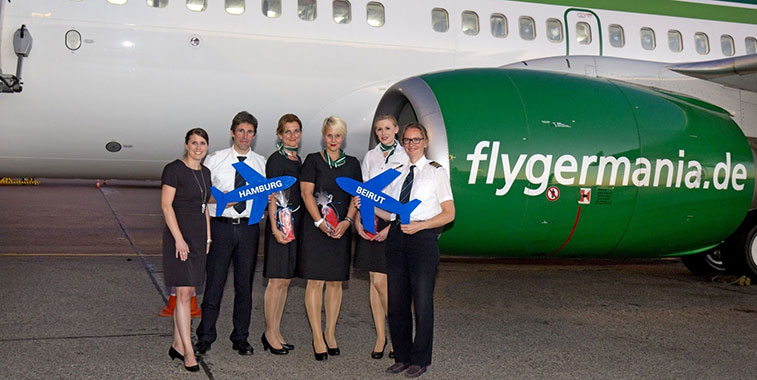 One of Germania’s many new scheduled routes launched this summer was from Hamburg to Beirut. The weekly service began on 1 July.

Using the same criteria as earlier (4,500 kilometres), there is a three-way tie for the airlines with the biggest net gain in long-haul services from European airports. Newcomer SkyGreece Airlines operates non-stop from Athens to Montreal, as well as from Athens, Budapest and Zagreb to Toronto Pearson. Iberia has begun non-stop service from Madrid to Havana (Cuba), Medellin (Colombia), Montevideo (Uruguay) and Santo Domingo (Dominican Republic). As mentioned earlier, Turkish Airlines has started non-stop service from its main Istanbul hub to Jakarta (previously served via Singapore), Manila, San Francisco and Taipei Taoyuan. This brings the Star Alliance carrier to 39 long-haul routes from European airports, still well behind the leaders in this category; Lufthansa (74), British Airways (72), Air France (66), Delta Air Lines (63), United Airlines (58) and KLM (56).

Newcomer SkyGreece Airlines has been encountering some operational difficulties in recent weeks, but it will still receive an ANNIE for launching four long-haul routes this year between various points in Europe and Canada.

Germania follows up its win in the “Most new Routes” award by also running off with this award for most new destinations served in Europe. The German leisure airline expanded its European network from 40 to 75 airports (a net gain of 35), beating Finnair into second place with a net gain of 28 airports. Finnair’s network grew from 52 to 80 airports in Europe for two reasons. The domestic/regional routes that were previously operated on its behalf by Flybe Finland are now, once again, operated under a Finnair code. This accounts for some of the increase in destinations, but the airline has also been active in serving new leisure markets during the peak summer season (such as Chania, Malta, Rhodes and Split) as well as adding some new city destinations such as Dublin, Gdansk and Tartu in Estonia. 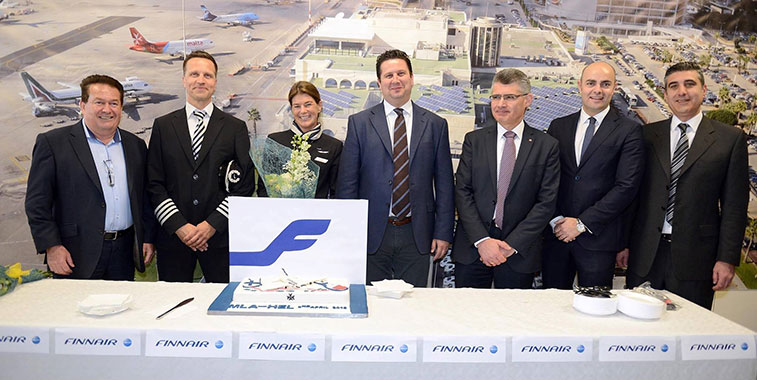 Finnair launched seasonal flights from Helsinki to Malta on 2 April using its A321s, just one of 28 new destinations added to its network during the last 12 months.

Despite low fuel prices there has been a surprising lack of new airline launches in Europe in the last 12 months. Last year’s runner-up, Air Lituanica, sadly ceased operations on 22 May 2015. This year’s clear winner is Aeroflot’s latest low-cost venture, Pobeda. Launched last December, the Moscow Vnukovo-based carrier has launched over 30 routes in its first year and operates over 400 flights per week using its fleet of 12 189-seat 737-800s. 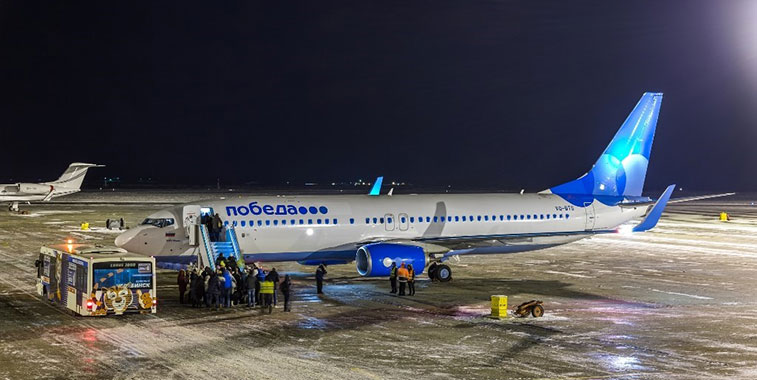 That looks cold! One of over 30 routes now flown by Aeroflot’s latest LCC subsidiary Pobeda is between Moscow Vnukovo and Chelyabinsk, which was launched on 27 December last year. The carrier only launched operations on 1 December 2014, making it the biggest new airline in Europe this summer.