One of the latest routes to be introduced in the Caribbean-to-Caribbean market was the 850-kilometre sector between Curaçao and Port of Spain on 15 December 2014 by InselAir.

The Caribbean is made up of more than 7,000 islands, of which 13 are independent territories. In geographical terms, the Caribbean as a whole is the area that includes the Caribbean Sea, all of the islands located to the southeast of the Gulf of Mexico, east of Central America and Mexico, and to the north of South America. With so many islands, it’s no surprise that air travel is a very important service that is required in this part of the world. In 2015, some 200 plus intra-Caribbean routes are operating according to OAG Schedules Analyser. 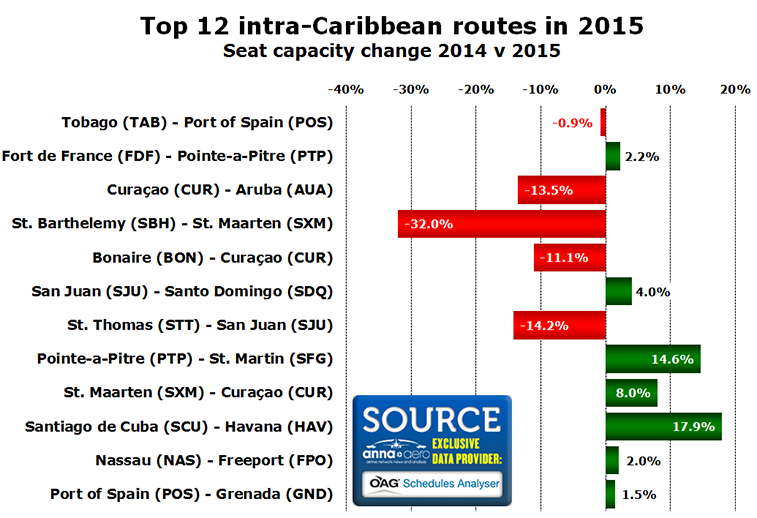 Santiago de Cuba – Havana is the fastest growing Intra-Caribbean route, recording a growth rate of nearly 18% when compared to 2014. This 756-kilometre Cuban domestic route is served solely by Cubana, which operates a 21 times weekly operation with a mixture of its An-158s and IL-96s according to OAG Schedules Analyser. The number one route however is between Tobago and Port of Spain, which is recording a decline of -0.9% when compared with last year. Caribbean Airlines operates 175 weekly flights on the short 82-kilometre distance in S15, and serves the route with its 68-seat ATR 72s. Overall in 2015, capacity is down -3% on the routes operating between the commercial airports of the Caribbean when compared with last year. 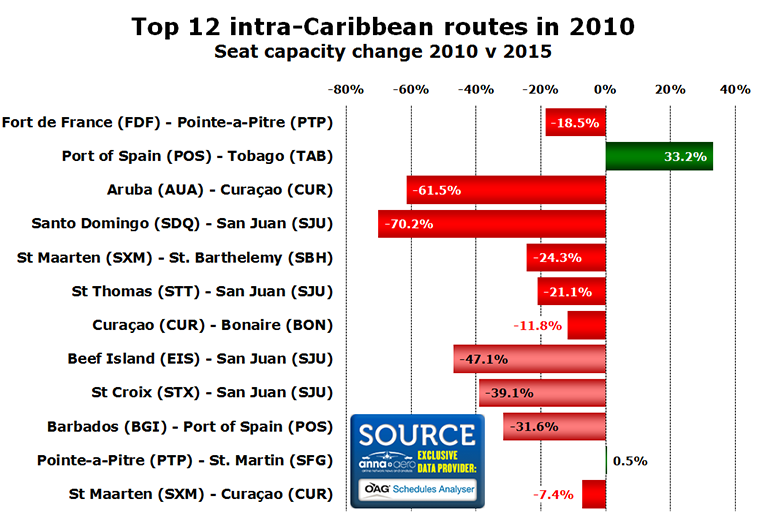 Since 2010, three airport pairs have left the top 12 intra-Caribbean routes (highlighted in light red). Of the remaining nine routes, only two have witnessed increases in growth over the past five years (highlighted in green), with the link between Port of Spain and Tobago now being the number one route in the region in 2015 in relation to available seat capacity. Since 2010, the average decline of the top 12 routes in relation to seat capacity is -25%.