Top 15 routes in relation to capacity, ASKs and frequency revealed 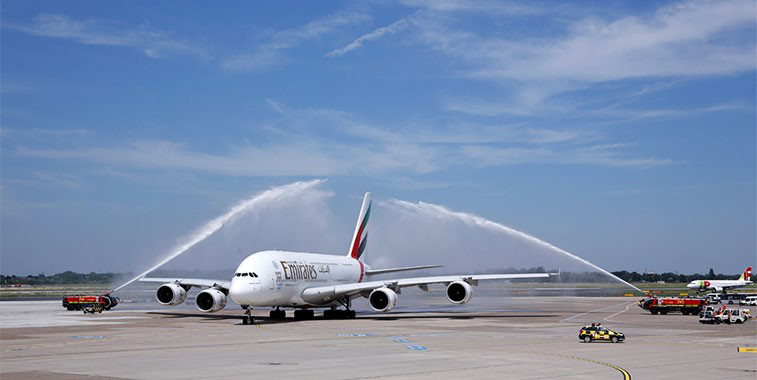 Last month, Emirates launched A380 services to Düsseldorf, further increasing its growth in annual ASKs. The UAE airline currently operates the world’s largest monopoly route in relation to ASKs, which is from its Dubai hub to New York JFK, the 12th largest route overall in 2015. The airport pair has witnessed a 29% growth in annual ASKs over the past 12 months, helped by further A380 rotations being introduced on the sector.

This week, anna.aero has analysed the top 15 routes in the world in relation to the three following factors: capacity, ASKs and frequency. The outcome of this analysis is based upon the current known schedule data for 2015 that is supplied to anna.aero by OAG Schedules Analyser. 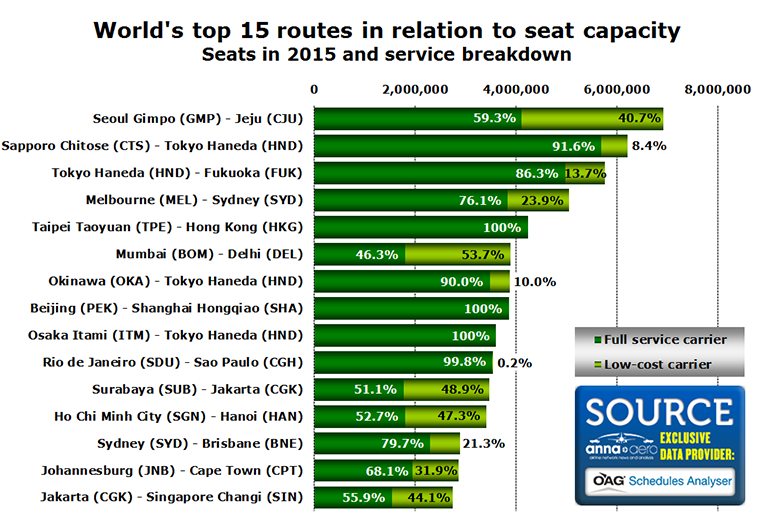 As it was in 2014, the 451-kilometre sector between Seoul Gimpo and Jeju remains the number one airport pair in 2015, and over the last 12 months the route has witnessed an increase its available seat capacity of 6.6%. Out of the top 15 routes, the one route that has grown the most over the past 12 months is the sector between Mumbai and Delhi, which has experienced a rise in capacity of 8.8%, helped in part by Vistara launching services on the 1,136-kilometre sector with an initial 22 weekly frequencies. The only new addition to the top 15 in 2015 is the city pair of Johannesburg to Cape Town. The sector replaces last year’s 15th placed spot route that connects Jeddah with Riyadh (16th in 2015). The route connecting Saudi Arabia’s two largest airports is showing a decrease in capacity of -12.2%, while the new South African connection to the top 15 is showing a rise in capacity of 4.5%. What can also be seen in the top 15 routes for seat capacity is the dominance of full service carriers, which hold on average 76% of available capacity on all routes in the top 15.

Barcelona to Madrid nowhere to be seen

One notable change from 2010 is that the route connecting the two largest cities in Spain, Madrid and Barcelona, which was the 12th largest route in relation to available seat capacity, has witnessed a decline in capacity of -25% over the past five years. The main contributor to this decline is the major growth that has been seen in the development of the high-speed rail network in Spain. Another major change from five years ago is that the route between Sapporo Chitose and Tokyo Haneda was the world’s number one route in 2010, however despite only witnessing a decline in capacity of -0.8%, the growth in the South Korean domestic link from Seoul Gimpo to Jeju (+25% when compared to 2010) means the number one domestic link in Japan has to settle for second place in 2015. Apart from the Seoul Gimpo to Jeju route, the only other route that has reported double digit growth over the past five years is Japanese link between Okinawa and Tokyo Haneda (+19%). The only other route that appeared in the top 15 in 2010 but does not in 2015 is the route between Jeddah and Riyadh. 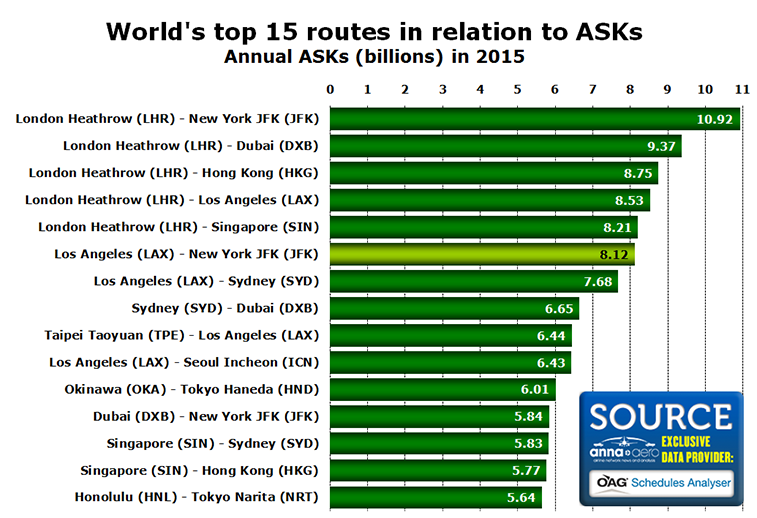 Heathrow is the king of ASKs

The top five routes in the world in relation to ASKs connect to London Heathrow, while the top domestic route in the top 15 is the 3,972-kilometre sector linking the US airports of New York JFK and Los Angeles (highlighted in light green). The route between New York and Los Angeles may concede a few places in 2016 however due to United Airlines ending services from the former airport in October. Of the top ASK routes, the one that has shown the most growth when compared to 2014 is the link between London Heathrow and Los Angeles, which has seen an increase in ASKs of 13%, helped by the introduction of further A380 services from British Airways on the sector.

With Emirates introducing an additional daily A380 rotation on its services to New York JFK from Dubai, it has helped the monopoly operation grow to become the 12th biggest route in the world in relation to ASKs, which have increased on the sector by 29%. A second route that is new to the top 15 in relation to ASKs is the sector between Honolulu and Tokyo Narita which is the 15th largest, a result of the services between Tokyo Narita and Los Angeles (15th in 2014) seeing a decline in available ASKs of 2.9% when compared to last year.

When taking a look back to 2010, the number one route in relation to annual ASKs was the 9,625-kilometre city pair of London and Hong Kong. The route has lost its the number one title because it has witnessed a decrease in ASKs of -20% when compared with the annual figure of 2010. One noticeable change however is the growth of the route from London Heathrow to Dubai which was the 10th largest sector in relation to ASKs in 2010. The analysis shows that the services connecting the UAE metropolis and the UK’s capital have witnessed a growth of 38% in ASKs over the past five years, and this figure could grow still further, as Emirates, the largest of the five carriers on the route, now operates a five times daily rotation using A380s. 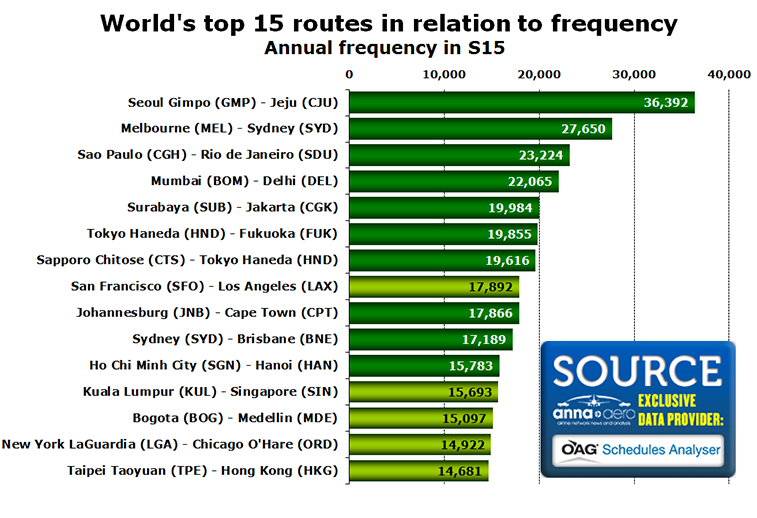 As it topped the top 15 routes in relation to available seat capacity, it is perhaps of no surprise to see that the South Korean domestic link connecting Seoul Gimpo to Jeju is the number one sector when it comes to available frequency. Due to its short distance, it would be interesting to see if Asiana Airlines, the number one airline on the airport pair, occupying 26% of the overall frequencies, would consider using its A380s on the sector to increase its capacity. When compared with 2010, the route has seen a rise in frequency of 18%.

Highlighted in light green above are the routes that have made it into the top 15 routes in relation to frequency of flights, but do not appear in the top 15 for ASKs or seat capacity. The most popular of these routes is the California connection between the hubs of San Francisco and Los Angeles, which has seen a decline in annual frequency for 2015 of 1.3%. However when analysing the route against its 2010 capacity, it has seen an increase in frequency of 20%. Over the past five years, routes that have left the top 15 in relation frequency include Barcelona to Madrid, which has seen frequency cut by -32%. Durban to Johannesburg, which was the 15th most popular in 2010, has seen frequency drop by -19%. The routes between Quito to Guayaquil (11th in 2010) and St. Maarten to St. Bathelemy (10th in 2010), have both witnessed cuts in frequency of -33%.