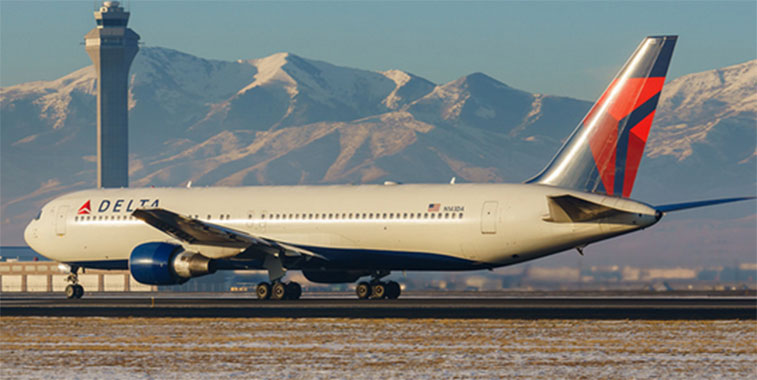 Delta Air Lines is the number one carrier from Salt Lake City, and when compared to S14, the SkyTeam member is reporting an increase in available seat capacity of 3.7% this summer. This week, the airline announced that it will introduce its third European service from the Utah airport to London Heathrow from 1 May 2016.

Salt Lake City is the capital and largest city in the state of Utah. Nestled just on the southern edge of Great Salt Lake, the city’s airport is home to Delta Air Lines’ fifth largest hub, a great selling point as Delta is the number one carrier in the world in relation to annual seat capacity (until the American Airlines and US Airways merger finalises in October). This summer, the carrier is reporting a rise in seat capacity from the facility of 3.7%. The result means that Delta now holds a 71% majority of seats available out of Salt Lake City this summer, up from the 70% it held in 2014. As a perspective, the airline has 85% more seats on offer per month than the airport’s second largest carrier, Southwest Airlines, which controls 11% of overall seat capacity available from Salt Lake City in S15 according to OAG Schedules Analyser data. 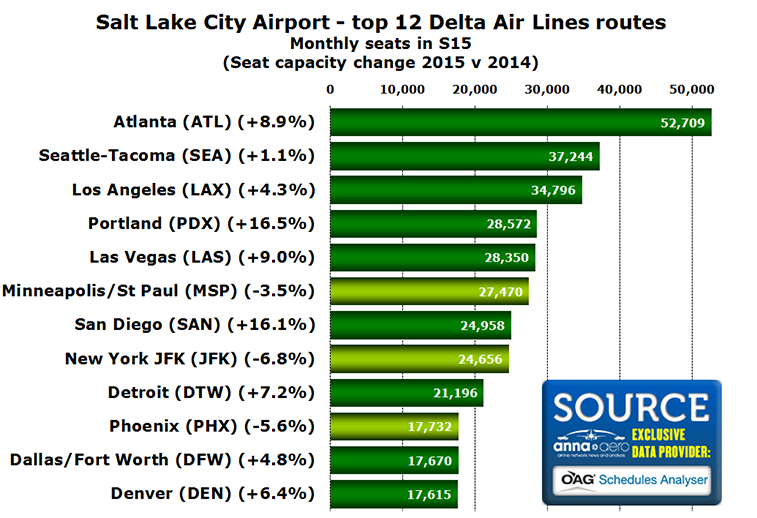 It is of no surprise at all to see that the number one route for Delta out of Salt Lake City is to Atlanta, the number one hub for the carrier, and also recently revealed by anna.aero as being only the second best connected hub in the world, a title that has been taken over by Istanbul Atatürk. The 2,552-kilometre sector to Atlanta is served solely by the carrier with 63 weekly frequencies this summer with a mixture of the airline’s Airbus and Boeing equipment ranging from 150-seater A320s to 261-seater 767-300s according to OAG Schedules Analyser.

From the airline’s top 12 routes from Salt Lake City only three are recording capacity declines (highlighted in light green) when compared with the same time period analysed last year, with the biggest cut being seen on the sector to New York JFK, Delta’s fourth largest hub. This route, unlike Atlanta, is not a monopoly airport pair for the SkyTeam member, as JetBlue Airways also operates a daily service against Delta’s 34 weekly flights, up one from S14, which means that airline is using smaller aircraft on the 3,191-kilometre city pair.

Of the 90 routes which Delta is operating non-stop out of Salt Lake City this summer, the destination that is showing the greatest growth in available seat capacity is Cancún (50th), which is up 88% when compared with S14. When looking at the top 12 destinations when compared to last summer, the only airport which has left the top 12 is Spokane (14th in S15), a result of the sector seeing a decline in capacity of 5.4%. The gap left by Spokane has been filled by Denver which is up 6.4%. 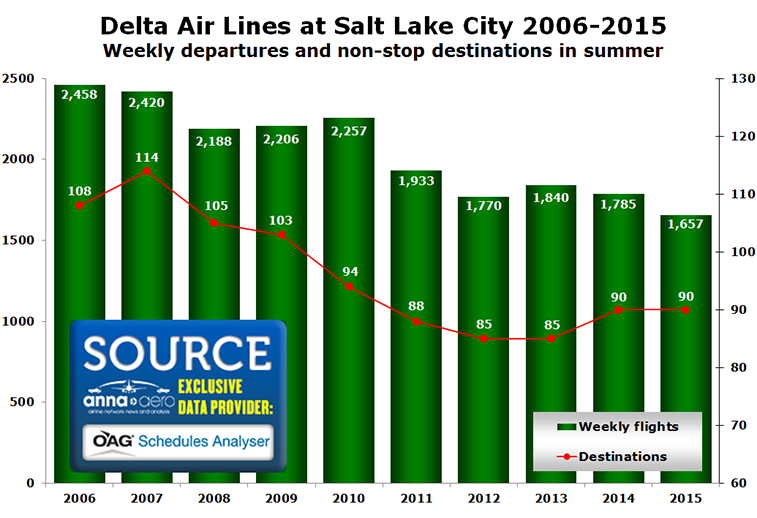 An analysis of Delta’s summer operations out of Salt Lake City since 2006 has revealed that over the past 10 years, the airport has lost just over 800 weekly departures from the SkyTeam member (801 to be precise). The airport has also lost 24 destinations operated by Delta over the past decade, with the world’s largest carrier once operating 114 non-stop destinations from its Utah hub. However, although the number of destinations served in S15 remains constant when compared to last year, the number of weekly flights has decreased by 7.2%. With the amount of seat capacity available compared to last year being up 3.7%, this means that Delta is starting to increase the size of its aircraft on certain routes, going against the trend being seen on the route to New York JFK. 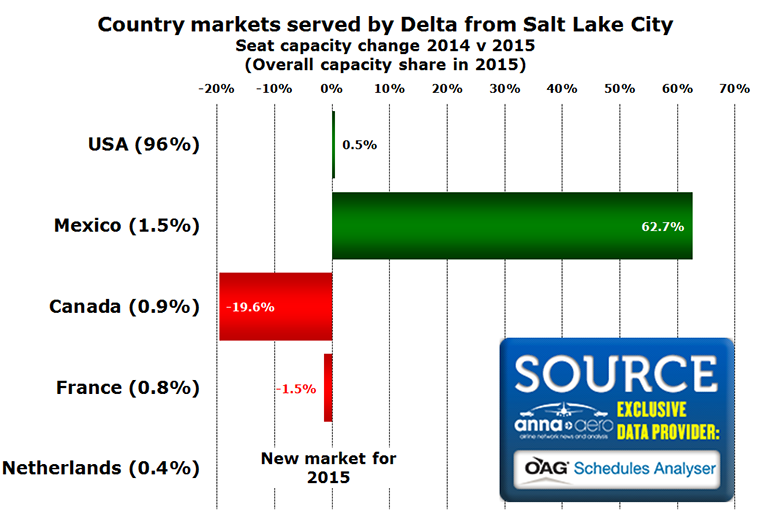 In 2015, Delta serves five country markets, up one from 2014 helped by the addition of services to Amsterdam being launched by the carrier on 1 May. What is very evident from the data given by OAG is that Canada has witnessed a decline in capacity of nearly 20%. What is surprising to note though is that the number one route to Canada, Vancouver (the 45th largest destination in relation to seat capacity) is up 6.9%. Mexico however seems to have taken up the spare capacity from Canada, with Cancún, Guadalajara (+72%) and Puerto Vallarta (+45%) all reporting strong growth. A new route for the airline out of Salt Lake City this year is Mexico City, which launched on the 20 December 2014. Delta operates a daily service to Mexico’s capital using its A319s.

Delta announced on 26 August that it will commence its third European route from Salt Lake City on 1 May 2016, a year to the day since commencing Amsterdam operations. Nat Pieper, Delta’s Senior VP for Europe, Middle East and Africa, commented on the announcement by saying: “For the second summer in a row, Delta will be launching a new route that gives customers more options when flying between the US and the UK. Delta, in partnership with Virgin Atlantic, are committed to offering an extensive network on the transatlantic market, and our new flights from London will offer more connections to destinations throughout the US and beyond.” The seasonal service will operate daily. Lane Beattie, President and CEO of the Salt Lake Chamber also added by saying: “The new flight is another demonstration of Utah’s economic strength and growing business influence. Connecting Utah’s business community with a global city like London will bring even greater prosperity to the Beehive State. Economically, connections like these matter.”