Canadian airports reporting growth of 4.1% in first half of 2015 Toronto Pearson is not only Canada’s busiest airport, but also the fastest-growing among the country’s top 10 airports. Traffic is up in all three geographic segments (domestic, transborder and international), a feat matched only by Montreal and Vancouver airports. Helping the international growth was the launch on 4 June of non-stop flights to Amsterdam with Air Canada. The inaugural return flight took place on 5 June and was celebrated with tulips and a ribbon-cutting ceremony.

Latest passenger figures for 10 of Canada’s busiest airports, reveal that demand is up 4.1% in the first half of 2015, slightly below the 6.1% growth reported across these airports in all of 2014. However, this is better than the 3.7% growth reported across all of 2012 and the 2.7% growth in 2013. Of the 10 airports analysed only six have reported passenger growth in every month so far this year. Halifax has reported traffic declines in six of the first seven months of 2015, while Edmonton and Kelowna are down year-on-year in five. 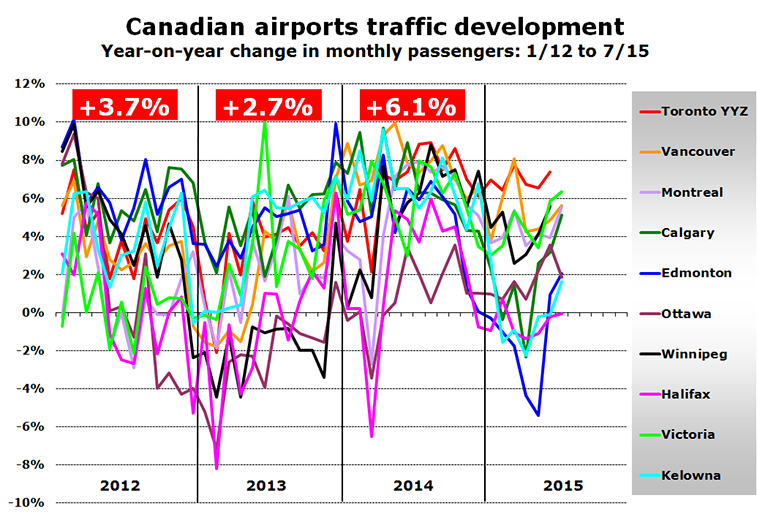 The eight busiest Canadian airports all break down their traffic figures into domestic, transborder (US) and international (non-US). A graph of 2015 year-to-date ‘growth’ for each airport by geographic region reveals that domestic traffic is up at seven airports (the exception being Edmonton), but with only Winnipeg (+5.6%) and Toronto Pearson (+5.1%) achieving growth of more than 5%. In the transborder market just four of the eight airports are reporting growth, led by Vancouver (+10.2%), Toronto Pearson (+6.5%) and Ottawa (+5.0%). 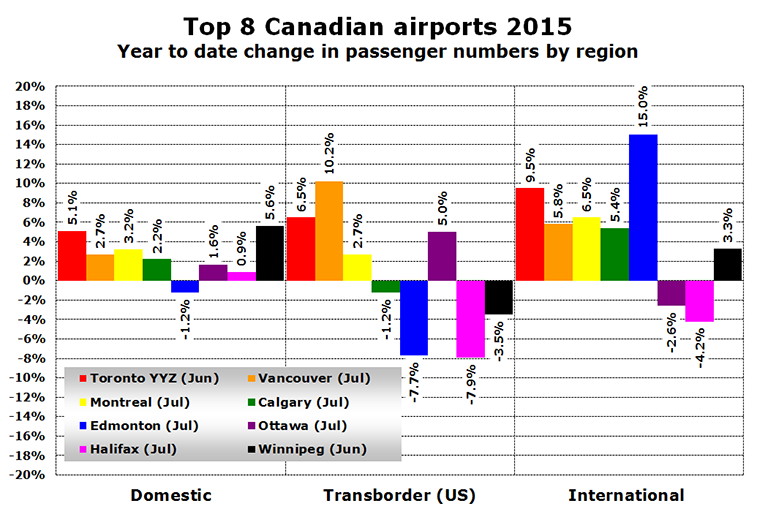 International (non-US) traffic is up at six of the eight airports, with Edmonton reporting impressive double-digit growth of 15% in the first six months of 2015, followed by Toronto Pearson (+9.5%) and Montreal (+6.5%). Only Toronto Pearson, Vancouver and Montreal have reported year-to-date growth in all three market segments in 2015. 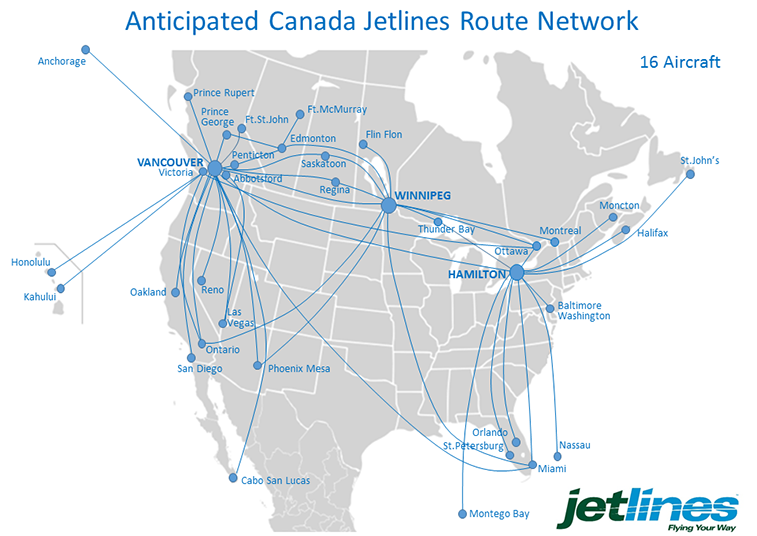 Canada’s aviation market may soon be welcoming some new airlines, including jetlines. The planned low-cost carrier has already revealed a map showing what its network could look like by the time it reaches a fleet size of 16 aircraft. The airline’s main base would appear to be Vancouver with secondary bases in Winnipeg and Hamilton (near Toronto).