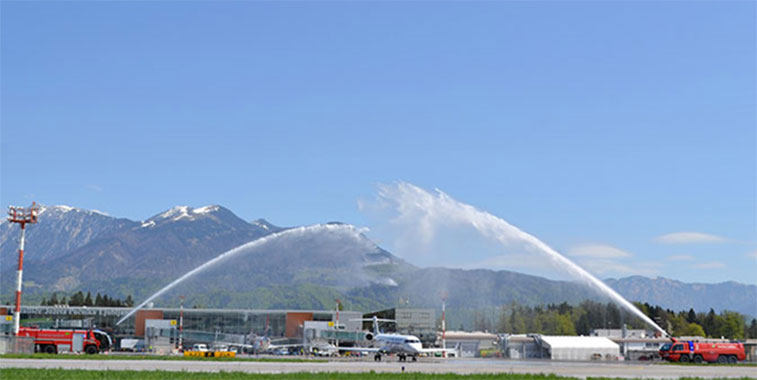 Ljubljana Airport, owned by the Fraport Airport group, serves the capital of Slovenia. Located at the middle of an old trade route between the northern Adriatic Sea and the Danube region, it was the historical capital of Carniola, a Slovene-inhabited part of Austria/Hungary. Now the city is home to 277,000 people, and in 2014 over one million on-night stays were had by international visitors, with Italy, Germany and the US being the three largest countries for tourists visiting Ljubljana according to the Statistical Office of the Republic of Slovenia. So far this year, the city’s airport is reporting growth of 11% with July seeing passenger numbers surpass the 170,000 mark for the first time. 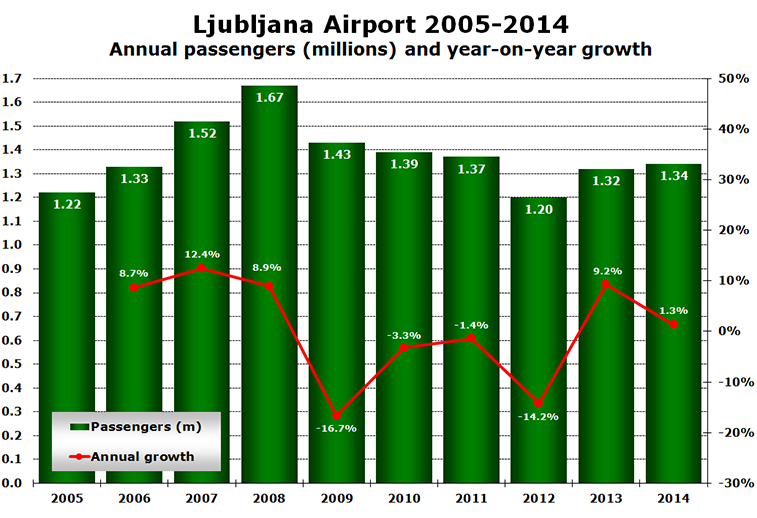 After seeing a period of traffic decline between 2009 and 2012, the airport recorded positive growth for 2013 and 2014 respectively. So far in 2015, the airport has witnessed growth in five of the seven months where data is available, with the months from April through to July recording double digit growth, most notably in May when passenger numbers were up 16% when compared to the same period last year. At this rate Ljubljana Airport might be able to reach 1.5 million by the end of the year. Nonetheless, this is still well below the 1.67 million achieved in 2008. 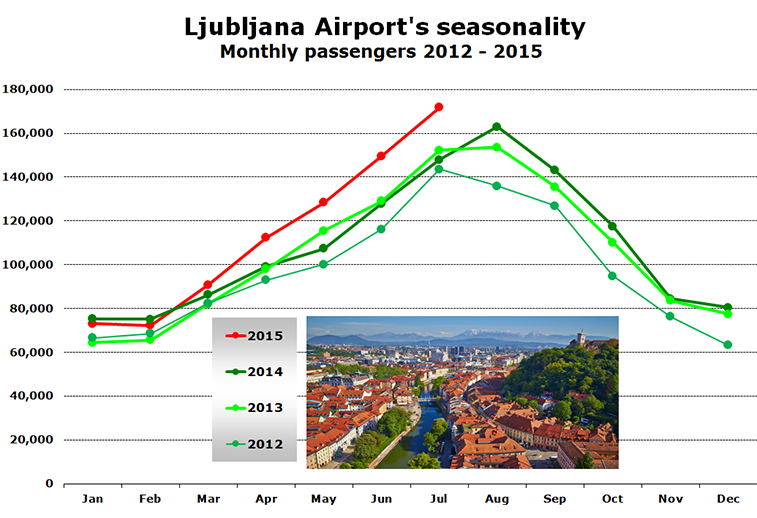 2015 growth much faster than in previous years

When comparing the same time periods of the past three years between the months of January and July, growth in 2015 has been much faster than that experienced in the previous two years. 2013 and 2014 both showed average growth results of 3.7% and 3.1% respectively. However 2015 has witnessed over double that of 2013 with an average monthly growth rate of 7.8%. The higher growth rates in the most recent summer months means that overall passenger numbers are up 11% in the first seven months of 2015.

When analysing the passenger statistics of 2014 for Ljubljana, the result shows that the airport achieved a SVID score of 8.69 (“Good”). For a comparison, an analysis was also carried out for Zagreb and Belgrade airports. The reason that these two airports were chosen was because of them both also being capitals, and also due to the close proximity that both have to Slovenia in relation to other European capitals. Zagreb achieved a score of 6.46 (“Good”) and Belgrade achieved a score of 8.77, also (“Good”). 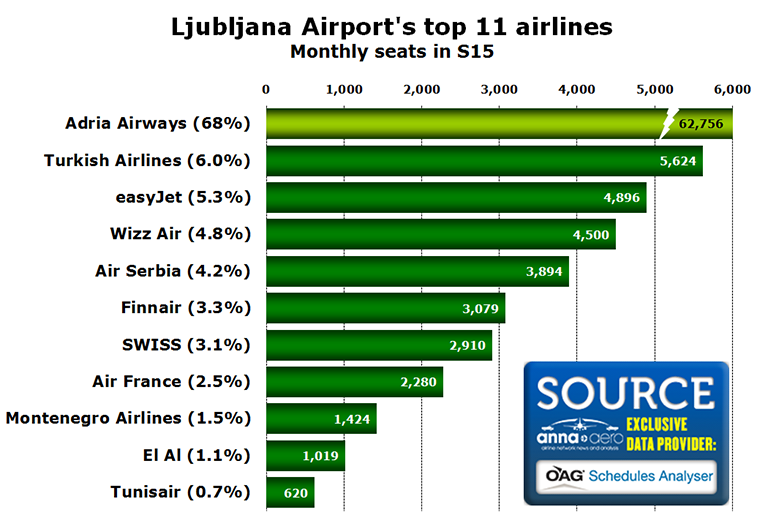 After reporting a growth when compared to last September of nearly 14%, Adria Airways maintains the number one carrier position out of Ljubljana. One noticeable change from last summer is that Turkish Airlines has now overtaken easyJet to become the airport’s second largest carrier, helped in part by the Star Alliance member reporting a growth in seat capacity of over 25%, making it the third fastest growing carrier out of the Slovenian capital after Montenegro Airlines (+39%) and Air Serbia (+49%). With SWISS also serving the airport, it means that Star is the major alliance at Ljubljana with three carriers present. SkyTeam and oneworld are also both present at the airport. However, each is only represented by one airline; Air France and Finnair respectively. One airline that is also climbing up the table is Wizz Air, after recording growth in seat capacity of 16% when compared to last summer, the LCC can expect to overtake easyJet (+7.6%) for third spot in 2016 if the rate of growth for both airlines continues at current levels.

From 2 March next year, LOT Polish Airlines is to resume services to Ljubljana with an initial five times weekly service from Warsaw Chopin operated by E170s, meaning that the airline will help grow the Star presence in Ljubljana to four carriers. From 26 March, the service is expected to increase to six times weekly, with Q400s also being introduced onto the sector alongside the currently planned E-Jet operations. 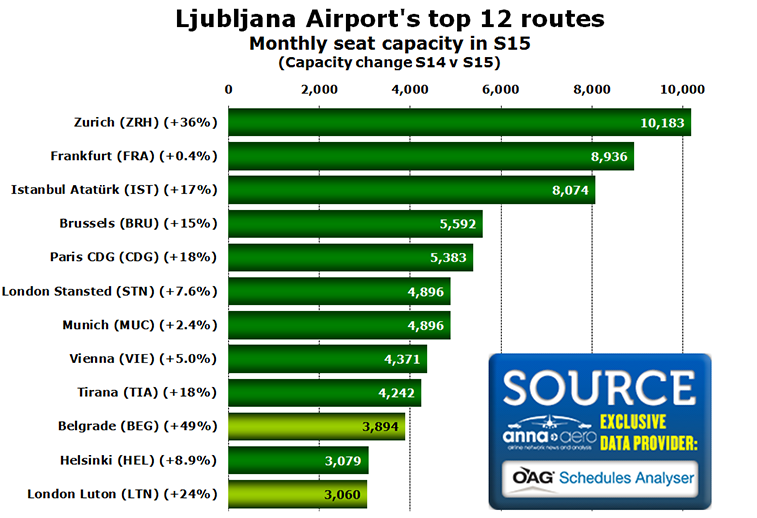 After recording a growth of nearly 36%, the 470-kilometre sector to Zurich has become the number one route from Ljubljana, helped by Adria Airways increasing its capacity on the city pair by 9.8%, and SWISS introducing services on the sector in March, according to OAG Schedules Analyser. Although Frankfurt, also run by the Fraport group, witnessed an increase of 0.4% in seat capacity, Zurich’s larger expansion pushes the German hub down to become the second most popular destination in S15 in relation to capacity. What is interesting to note however is that the top four routes from the Slovenian capital are to the large Star Alliance hubs in Europe, with services to Stockholm Arlanda and Copenhagen (both SAS hubs) not appearing in the top 12 routes, but served by Adria Airways, with the former launching on 23 April. The fastest growing route in the top 12 is Belgrade (highlighted in light green), which is new to the list after witnessing a growth of 49%, helped by the increase in services by Air Serbia. Another new route to the list is London Luton (also highlighted in light green), after seeing a seat capacity increase of nearly 24% by operating carrier Wizz Air. As a result of growth witnessed on these two routes, it means that Moscow Sheremetyevo and Skopje both leave the top 12. 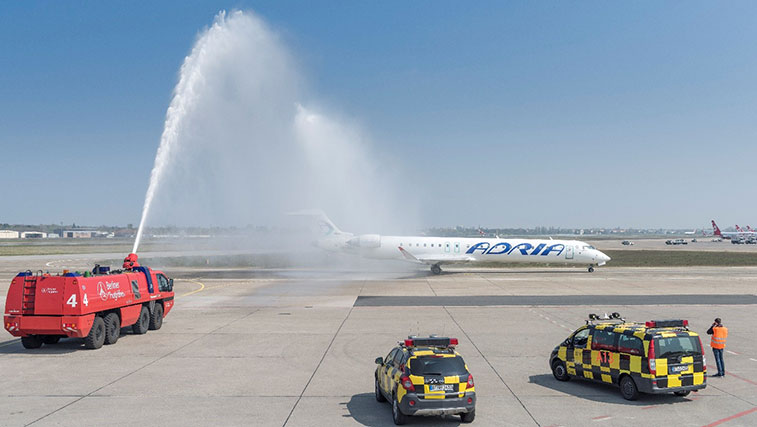