Pakistan sees a rise in seat capacity of 23%; flydubai is fastest growing airline while UAE is top foreign country market 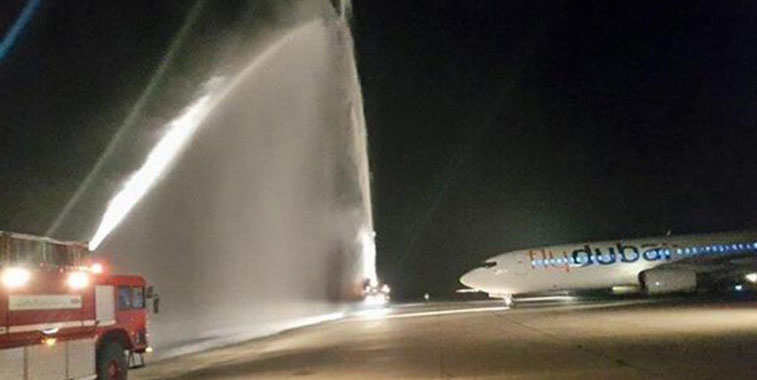 On 10 July, flydubai launched its latest service from its Dubai hub to Faisalabad, its fifth destination in Pakistan and the first international route for the Pakistan gateway. This summer, the airline is recording a growth in capacity to the country of 66%, making them the fastest growing carrier.

Pakistan is one of the world’s youngest countries, established in 1947 after gaining full independence from India. One of anna.aero’s favourite places to visit is Mohenjo-Daro City, built around 2500 BCE, it was one of the largest settlements of the ancient Indus Valley Civilisation, and one of the world’s earliest major urban settlements. The excavated ruins are a great place for the data elves to play a game of hide and seek. As always, if you want to see these wonders for yourself, the best way to reach Pakistan is to fly, and there are currently 22 airports with commercial flights that may be of relevance. 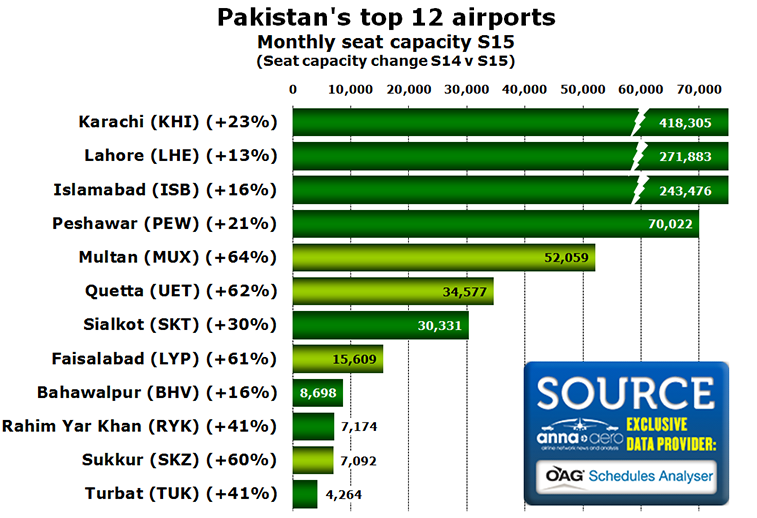 22 commercial airports, only one is reporting a reduction in capacity

Pakistan’s commercial airports have seen major growth in capacity in the past 12 months, as S15 seat capacity is showing a rise of 23%. Of all the airports in Pakistan, the one that is recording the greatest growth in capacity is Gwadar (13th largest in S15), which is showing an increase in capacity of 73%. A total of eight airports are recording a growth rate over the past 12 months that is greater than 60%, with four of these airports being in the top 12 (highlighted in light green). Only one airport is showing a decline in capacity when compared with S14, Skardu. The 14th largest airport in 2015 was the 11th biggest last year. However, the facility has witnessed a decline in seat capacity of 14% according to OAG Schedules Analyser. In the top 12, the airport order pretty much remains constant, with Multan (+64%), Quetta (+62%) and Faisalabad (+61%) all climbing one place as a result of all of them seeing a growth of over 60%. Turbat is a new airport to the top 12 (13th in S14) as a result of Skardu’s capacity decrease. 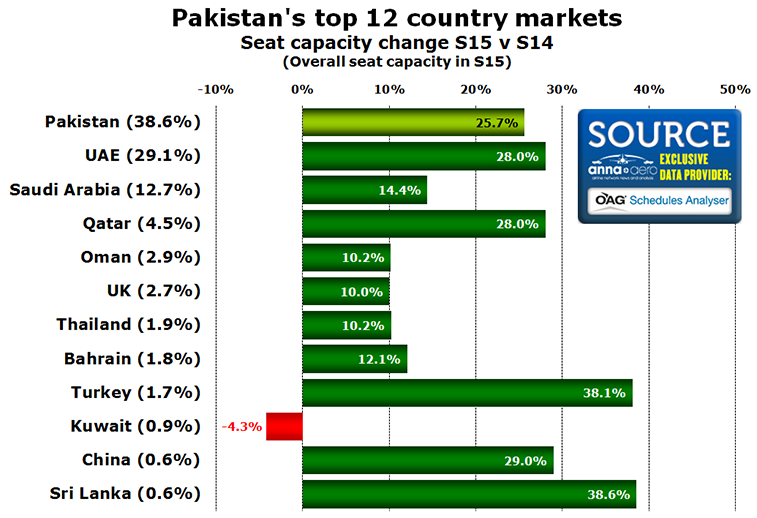 After seeing a rise in capacity of nearly 26%, the domestic market is the largest in Pakistan. The country market that is recording the best growth in the top 12 is Sri Lanka. The country pair is served by two routes to Colombo from Karachi and Lahore, with the latter only being launched in November last year with a twice-weekly service operated by Mihin Lanka. Services to Karachi have seen an increase in capacity of 11%, a sector flown by SriLankan Airlines. Of the country markets in the top 12, the only one to show a decline in capacity is Kuwait. In total there are three connections between Kuwait City and Pakistan for S15 (same as in S14), Lahore (-6%), Islamabad (+1%) and Sialkot (-23%). Surprisingly Karachi, the largest airport in Pakistan relating to seat capacity, does not have a direct service to Kuwait. 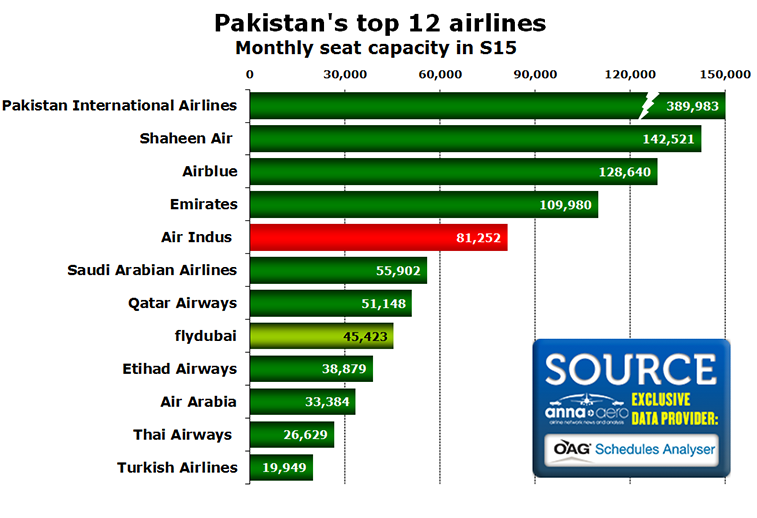 Over the past 12 months, Turkish Airlines has grown seat capacity out of Pakistan by 38%, beating the MEB3 carriers of Emirates (+13%), Qatar Airways (+28%) and Etihad Airways (+18%). What should also be noted is that Emirates’ sister airline, flydubai (highlighted in light green), has now overtaken Etihad Airways in relation to the monthly seat capacity on offer by both airlines in S15, helped by the carrier reporting a growth in capacity of 66%, and climbing from 12th spot in 2014 to eighth in 2015 in relation to Pakistan’s top 12 airlines. This has been helped in part by the airline recently launching services from Dubai to Faisalabad. Nonetheless the number one out of Pakistan remains the country’s national carrier, Pakistan International Airlines. The airline has reported a growth in capacity when compared to the same time period of last year of 25%. None of the airlines in the top 12 are reporting seat capacity reductions in S15. However, Air Indus is showing a consistent pattern with 0% growth and offering the same amount of seats as S14, but growth from Airblue means that the airline drops to fifth in S15 from fourth in last year.

Air Indus (highlighted in red), Pakistan’s fifth largest carrier in S15, was recently suspended by the CAA (Civil Aviation Authority of Pakistan) for violating safety regulations on 1 July. However an investigation by anna.aero shows that the airline’s booking system is taking bookings for flights commencing from 11 September. Therefore they have been considered in the analysis of Pakistan’s top 12 airlines as a result of assuming that flights will be resuming shortly. However, anna.aero is unaware as to the amount of seats that would have been lost during the suspended period, which would alter the overall 2015 top 12 airline standings. 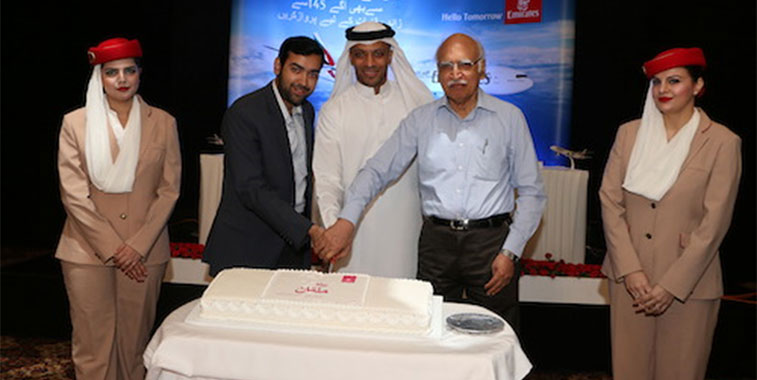 On 1 August, Emirates launched a new four times weekly service from its Dubai mega-hub to Multan in Pakistan. The connection meant that the MEB3 carrier now operates to six airports in Pakistan, helping contribute to a growth in seat capacity of 29% in the UAE country market.