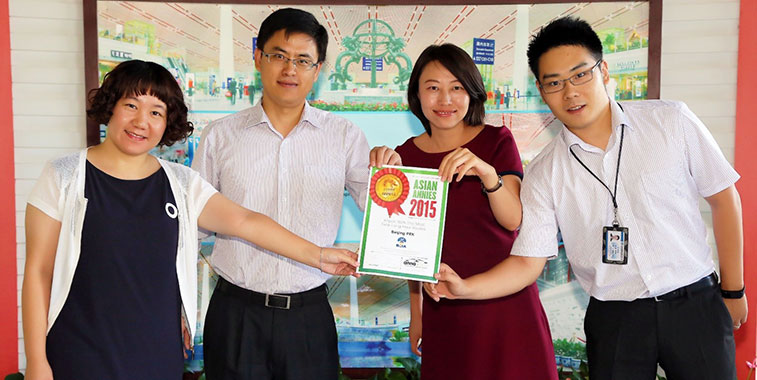 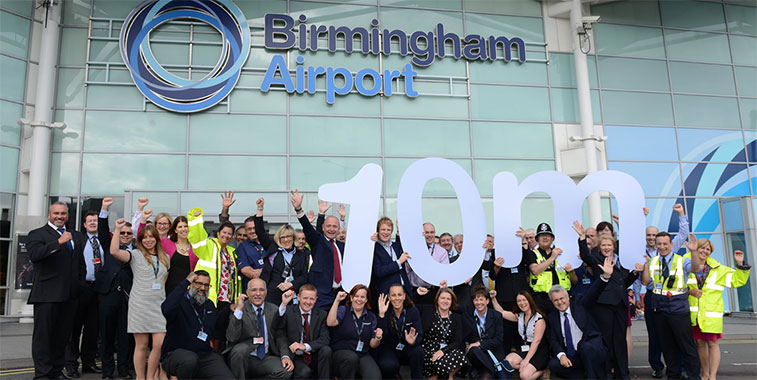 On 2 September, Birmingham Airport celebrated the milestone of passing 10 million passengers in the space of 12 months. Latest figures reveal that 10,004,119 passengers passed through the terminal between Friday 28 August 2014 and Thursday 27 August 2015, the first time the benchmark has been reached in the airport’s 76-year history. The result represents a 5.1% increase in passengers when compared to the same period the previous year. Commenting on the milestone being reached, Paul Kehoe, Birmingham Airport CEO (crouching in the front row on the right hand side), said: “We have celebrated many accomplishments this year to get to this point, including American Airlines launching daily flights to New York JFK, Hainan Airlines’ historic flight programme to Beijing, and Emirates launching its third daily service to Dubai. We have also seen other airlines commence flights to key destinations such as Norwegian to Madrid and Icelandair’s Reykjavik service, as well as monthly and daily passenger records smashed on a regular basis. We’re now focussed on hitting 10 million passengers for the calendar year and the airport will be working very hard to achieve that goal.” 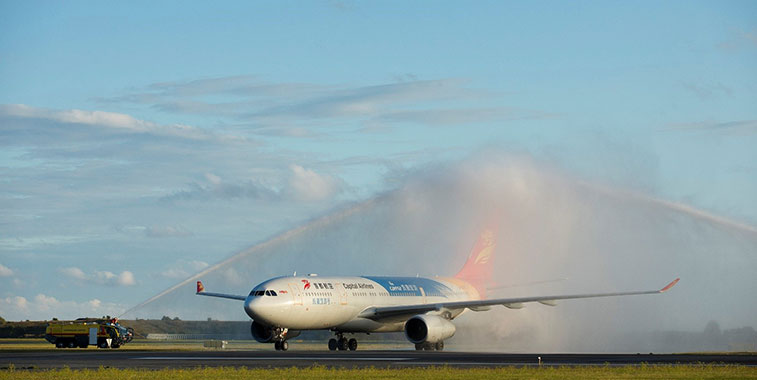 On 3 September, Copenhagen Airport welcomed the arrival of Beijing Capital Airlines’ first charter flight from Beijing. The carrier will operate a series of charter flights during September and October from Beijing and Hangzhou to the Danish capital. This was also the first long-haul flight for the airline. On 8 September, Air Transat announced that it is to launch services from Glasgow to Montreal. The weekly A310 service will start on 30 May 2016, and will fly each Monday until 2 October. Lesley Kane, Sales Director UK & Ireland, Air Transat, commented: “We’re delighted to be launching this new route for Scottish passengers, and we are sure this service will be very popular as there is a deep historic connection between Scotland and Quebec. The new non-stop service to Montreal brings our Scottish connections to four great Canadian cities, and adds to Toronto, Calgary, and Vancouver which have been Air Transat staple destinations for over 20 years.” Celebrating the news of Air Transat’s new service from Glasgow to Montreal are Kathryn Munro, GM UK & Ireland, Air Transat, and Francois Bourienne, Commercial Director, Glasgow Airport. On 3 September, Ryanair announced that it would launch services from Dublin to Amsterdam on 27 October. The announcement was made on the same day that the ULCC announced its S16 schedule from its main Irish hub, which will see the airline operate 742 weekly flights using 26 based 737-800s. The day before on 2 September, the airline announced its S16 programme from its three London airports (Stansted, Luton and Gatwick). In total 150 routes will be available from London next summer. At the same time the airline also unveiled its new cabin crew uniform. 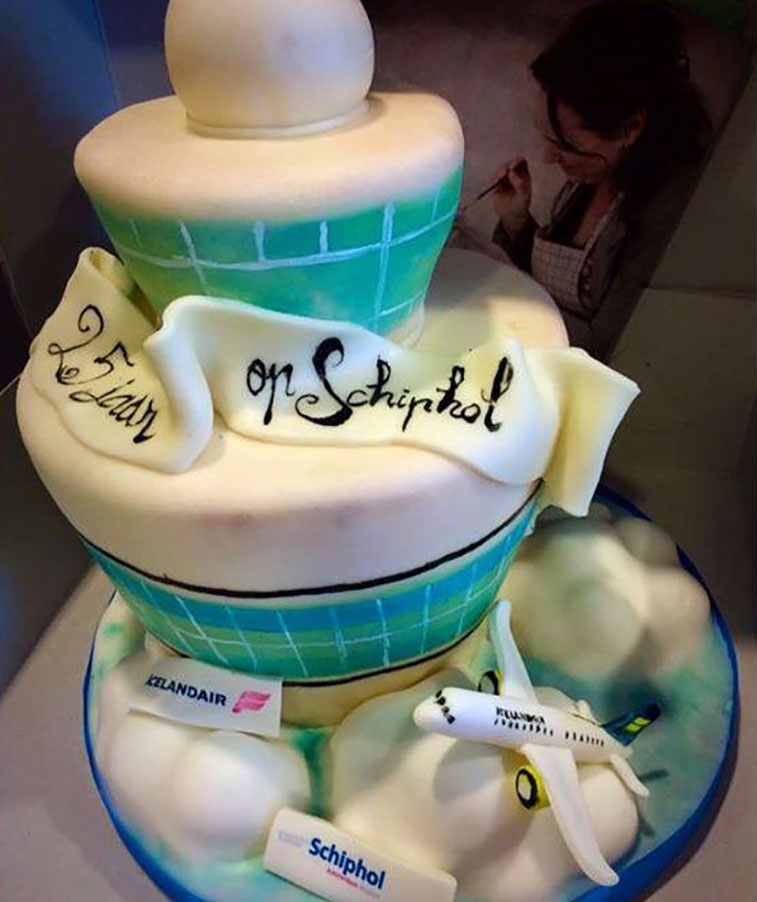 On 1 September, Birmingham Airport and Air France celebrated the 30-year anniversary of services between the UK’s second city and Paris CDG. The French national carrier operates almost 2,000 flights and carries around 225,000 passengers a year from Birmingham, and has a strong network of onward connectivity from Paris to Nice, Johannesburg, Beijing, Hong Kong, Marseille and Shanghai. Paul Kehoe, Birmingham Airport CEO commented at the celebratory event by saying: “Commencing services in September 1985, Air France is one of Birmingham Airport’s longest serving carriers and has sustained operations throughout the three decades, growing from strength to strength.” On 7 September, Frankfurt Airport and LOT Polish Airlines celebrated the 50-year anniversary of services between the German city and Warsaw Chopin. On 7 September 1965, LOT operated its maiden scheduled flight between Warsaw Chopin and Frankfurt. The German financial centre quickly became one of the key cities in LOT’s route network. Currently, the Polish carrier operates a thrice-daily service between Warsaw and Frankfurt. The first flight on the city pair was operated by an Ilyushin Il-18. However, today flights are operated by E170s, E175s and E195s. Jiri Marek, LOT Sales and Distribution Executive Director, commented about the anniversary by saying: “We are happy to celebrate this anniversary together with Frankfurt Airport, and to recall how our product offering has developed over that time.” On 4 September, Jet2.com celebrated the 10-year anniversary of services from Newcastle Airport. Since launching from the facility in 2005, the airline has carried 4.4 million passengers from the northern UK gateway. This summer, the carrier will fly to 30 destinations from the airport. Celebrating the occasion were Jet2.com’s Commercial Director, Steve Lee, and Leon McQuaid, Aviation Development Manager at Newcastle Airport, who commented by saying: “We are delighted to be celebrating 10 years of Jet2.com operating from Newcastle Airport. It’s amazing how in the last ten years the airline has gone from one route to more than thirty, and we look forward to seeing even more new Jet2.com destinations from the airport over the next decade.”