Cakes and smiles: There’s some appearance of normality in the way that Russia’s air transport business has continued to function and launch important new routes in the past year, albeit miles behind its economic potential. Transaero Airlines’ flurry of new destinations includes: St Petersburg to Shanghai in June, Moscow Vnukovo to Delhi in February, and Moscow Domodedovo to Malta in April, while Aeroflot’s fast-growing low cost unit, Pobeda, which has generated near-30% growth at Moscow Vnukovo this year, launched Sochi/Adler to Kazan, amongst many other new routes, in May.

The recent announcement that Russia’s (majority) state-owned carrier Aeroflot was going to take over the country’s second biggest carrier, Transaero Airlines, will have a significant impact on competition in the Russian market. Based on latest passenger figures from the Russian Federal Air Transport Agency (Rosaviatsia) the two carriers accounted for 43% of passenger movements on Russian carriers in the first seven months of 2015. Add in the figures for Rossiya Airlines, ORENAIR, Pobeda, Donavia and Aurora, all of which are either fully-owned or majority-owned by Aeroflot, and the market share climbs to over 57%. 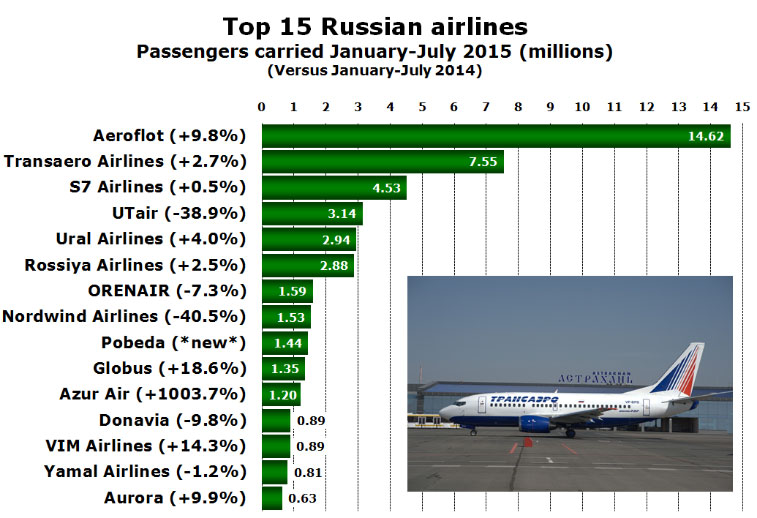 Passenger numbers on Russian airlines are up 1.1% in the first seven months of this year from 51.3 million to 51.8 million. While UTair and Nordwind Airlines have seen significant drops in demand, Aeroflot’s LCC Pobeda has made an impressive start, already ranked ninth among the nation’s airlines. Another fast-growing airline is Azur Air (formerly known as Katekavia –  IATA code ZF), which has been around for 20 years but has grown its scheduled services significantly in recent times thanks to the acquisition of several 757s and 767s from UTair.

Government statistics for airport traffic in the first six months of 2015 shows a mixed picture. Of the top 15 airports 11 are showing a drop in traffic compared to the first half of 2014, with Rostov-on-Don seeing the biggest drop of almost 17%. The rapid growth of Aeroflot’s in-house LCC Pobeda at Moscow Vnukovo has helped the airport move past St Petersburg into third place among Russian airports. Sochi/Adler is apparently still benefitting from its raised profile and new infrastructure after hosting last year’s winter Olympics. 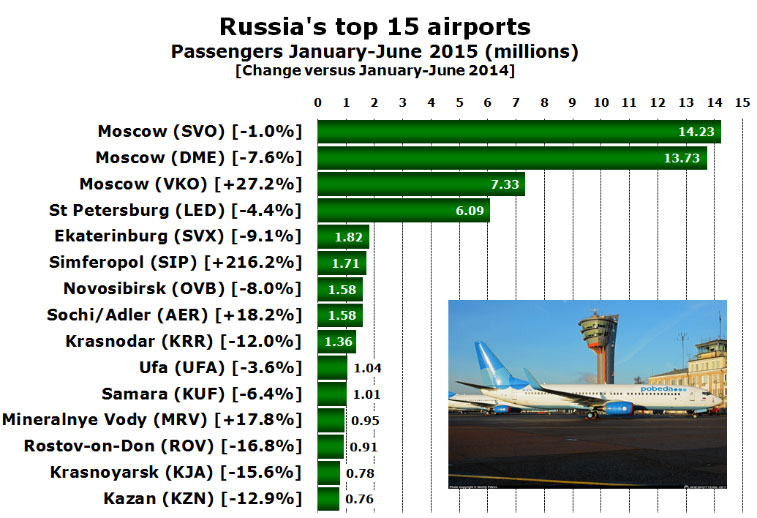 The fastest-growing airport according to these statistics is Simferopol, in the disputed region of Crimea. Since February 2014 the airport has been under the control of Russian forces and the airport now handles flights almost exclusively to and from Russia. As a result, passenger numbers at Russian airports (including Simferopol) are up 0.5% in the first half of 2015. If Simferopol is not included, demand across Russia’s other airports is down 1.3%. An Istanbul-style mega-hub for Moscow? These images are from a magazine produced in Russia in 1992 by the anna.aero publisher, Paul Hogan, who was involved in British Airways’ plans for “Air Russia” – a proposed Helsinki-style hub at Moscow Domodedovo. Hogan believes the potential for a Moscow mega-hub as good as Istanbul persists, and this was the subject of his presentation at the CEE Aviation conference in Budapest 3 September.

Using OAG schedule data (which still considers Simferopol in Ukraine) a comparison has been made for the leading country markets from Russian airports in September 2015 and compared with September 2013. On this basis, not surprisingly, Ukraine has become the leading international country market with seat capacity doubling in two years. However, if we were to exclude flights to Simferopol (which account for 80% of the seat capacity), Ukraine would become only the tenth biggest market, with capacity down 60%. 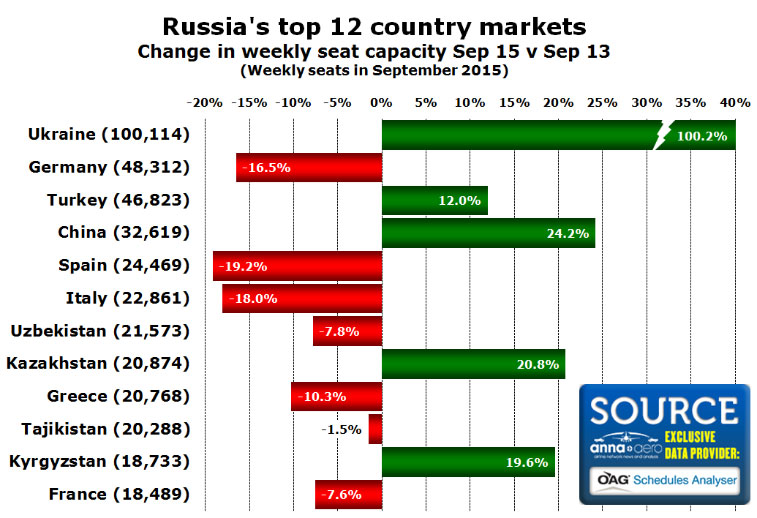 Again comparing international services between September 2013 and September 2015 reveals that among western European airlines, Germany’s two leading carriers have made significant reductions in seat capacity, with airberlin down 40% and Lufthansa down 50%. In the last week, Lufthansa has suspended three Russian routes; from Frankfurt to Moscow Vnukovo, Nizhny Novgorod and Samara. airberlin has axed its Berlin Tegel-St Petersburg connection and its Munich-Moscow Domodedovo service.

Moscow’s potential as a mega-hub explored

Last week anna.aero’s publisher, Paul Hogan, gave a presentation at the CEE Aviation Conference in Budapest. With the title “How good would it be for Russia’s air transport if everything was normal?” You can download his 20-slide presentation below.

anna.aero’s presentation at CEE in Budapest TAV-operated Tbilisi Airport serving the capital of Georgia (with which Russia was at war in 2008) celebrated the launch of Aeroflot’s new daily service from Moscow Sheremetyevo last October. Despite the current crisis, Ukrainian traffic is also up substantially, although the picture is complicated as many agencies and groups – such as OAG – define Crimea’s growing traffic base as part of Ukraine.