SWISS wins race to be: “Fastest Airline In The World” in Airbus-sponsored anna.aero-Budapest Airport Runway Run 5 September 2015: 920 runners entered this year’s Airbus-sponsored anna.aero-Budapest Airport Runway Run, now positioned as the air transport industry’s top charity sports event. The race, won by SWISS in both team and individual categories, took place on the normally very busy Runway 13R-31L which was re-opened to traffic less than two hours after the event.

SWISS is officially “The Fastest Airline In The World” having won the air transport industry’s 10km charity race held annually on Runway 13R-31L of Budapest Airport on Saturday 5 September, beating the reigning champions, Aer Lingus, although the IAG carrier achieved a second-place podium finish for both its team and individual runners.

The SWISS team (called “HB Fun” after the designator for Swiss-registered aircraft) also took “the double” as team member Christian Mathys was the first to cross the line as “Fastest Aviator” flying time of 31.02 – a course record (or four lengths of the runway). 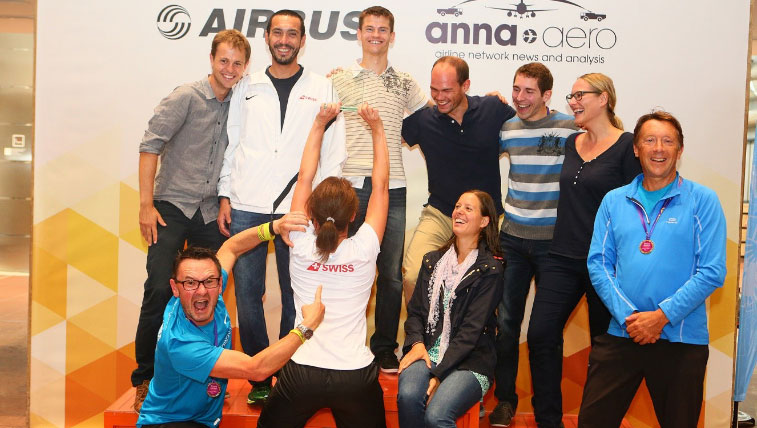 SWISS win!!! Commenting on the victory for the Star Alliance airline team, SWISS CEO, Harry Hohmeister, said: “The victory of the brilliant SWISS team in winning ‘Fastest Airline In The World’ in the Budapest Airport Runway Run is also a triumph for the company’s closely-held corporate and social responsibility goals. A healthy, motivated workforce is a key factor in our success and desire to remain competitive internationally. I applaud our fine SWISS Corporate Citizens for both their sporting achievement, and for taking part in a significant industry charity initiative.” Airbus EVP Sales Europe, Chris Buckley (far right) presented the prize.

The Airbus-sponsored anna.aero-Budapest Airport Runway Run took place on a specially-closed, normally very busy, operational runway which was re-opened to traffic less than two hours after the event. 920 runners entered this year’s race, the third time Budapest Airport has staged the annual event which is co-organised with the airline news and analysis website www.anna.aero and which is now positioned as the air transport industry’s premier charity sports spectacle. 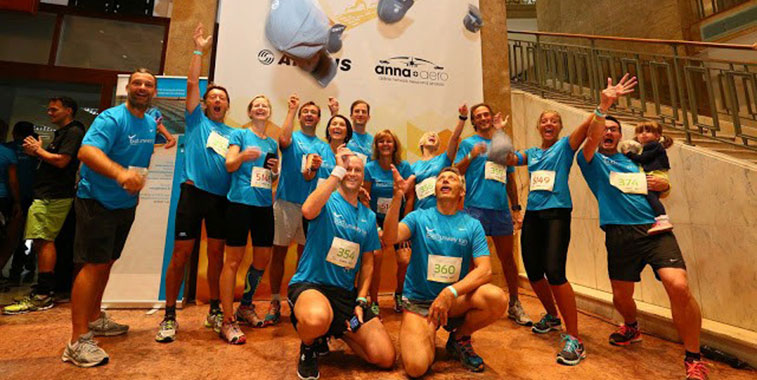 Personally leading a team into the race, Airbus EVP Sales Europe, Chris Buckley (second left) said: “Airbus is extremely proud to be the main sponsor of this leading sports charity event for the global aviation industry – we entered 12 enthusiastic runners into the race and we particularly welcomed the opportunity to share a runway with an airport which is dominated by Airbus flights, including Wizz Air, the first low cost carrier to commit to the A321neo (with an order for 110 units). With so many of our customers on the Budapest Airport runway, the Airbus team had to run the race at a deliberately slow pace in order not to humiliate the airline teams and damage our excellent customer relationships. However, the support we are able to give to the benefiting good causes is the ample and much-treasured prize for Airbus.” 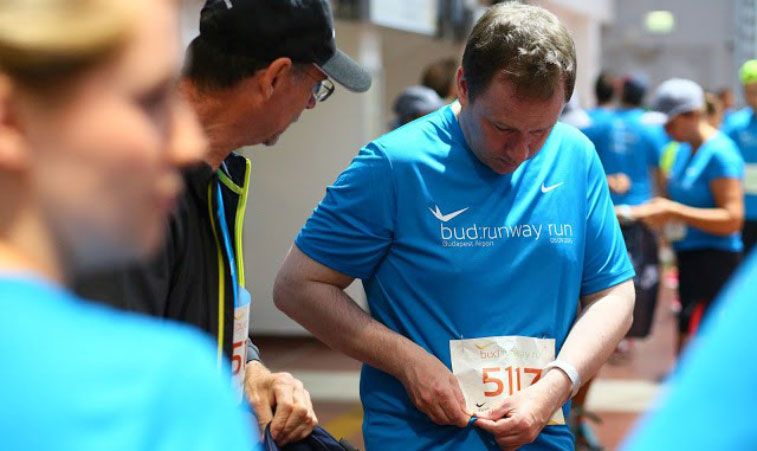 Captain of the reigning champions: The CEO of Aer Lingus, Stephen Kavanagh, led a team of 12 – achieving a second-place podium position in both the Fastest Airline Team placings, as well as a valiant defensive second-place individual result for last year’s race winner, James Liddane, with a time of 34.14. 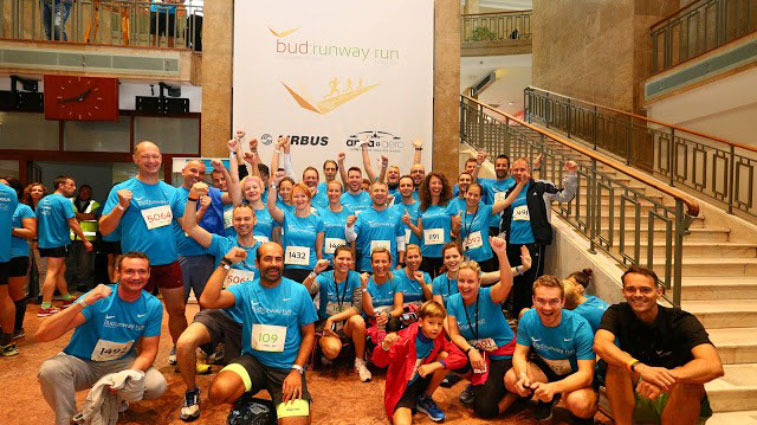 Jost Lammers CEO of Budapest Airport (standing second row): “Budapest Airport takes significant pride in staging the air transport industry’s annual sporting and charity event which is unique in its category in Europe. It combines the unforgettable sporting experience of running on a runway with the chance for us to show off the beauties of the city of Budapest to our guests and business partners from the aviation industry, while allowing us to donate all entry proceeds to the Suhanj! foundation in Hungary, and to the Anthony Nolan charity which provides bone marrow transplants for leukaemia sufferers on a global basis. It really is win, win, win for everyone concerned.” 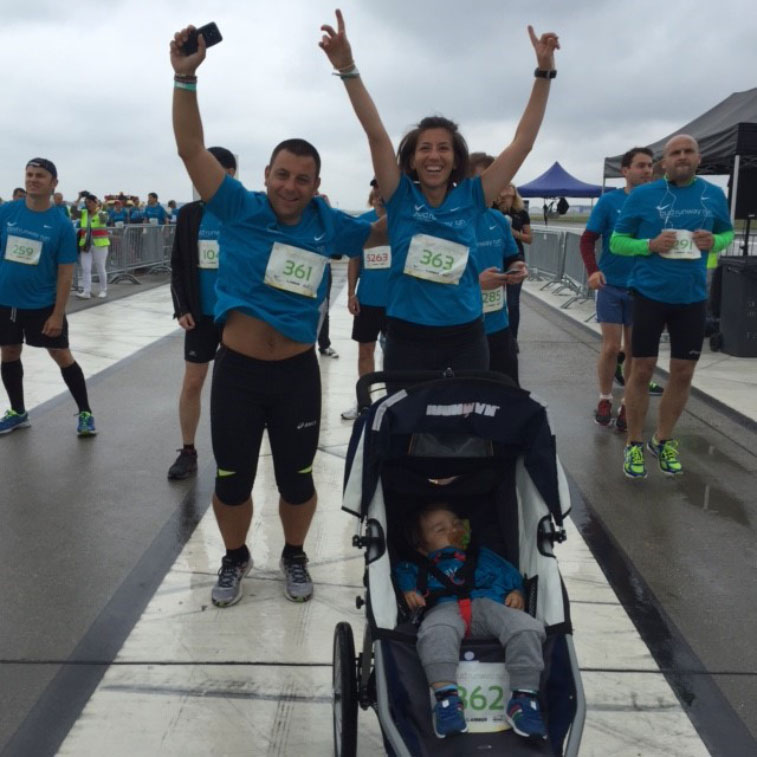 Head of Airport Marketing Development at Aeroporti di Roma, Raffaele Pasquini, led the “All roads lead to Rome!” team with his partner Enrica and their one-year old son, Leonardo finishing the 10km distance exactly on the hour. Major presence from the MEB3 teams including Qatar Airways and Emirates. 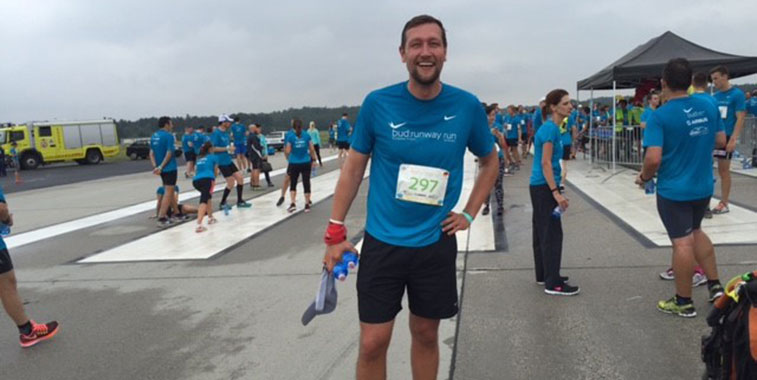 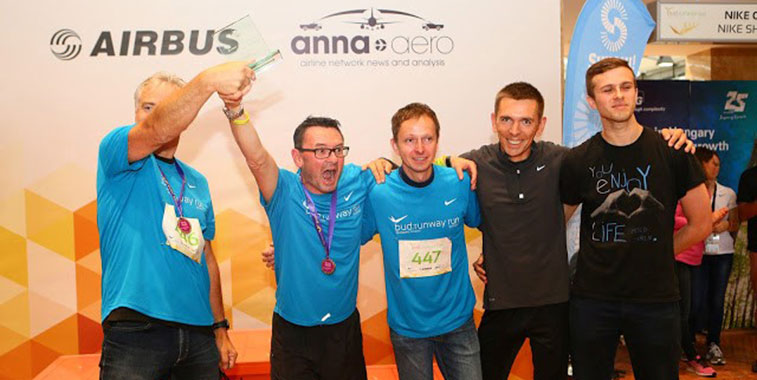 “Fastest Airport In The World” for the second year in succession: Poland’s Wroclaw Airport. We all wore blue: This year’s great “wear with pride-worldwide” technical souvenir shirt worn by all runners. The historical former Terminal 1, a preserved building and events centre, served as the race HQ. 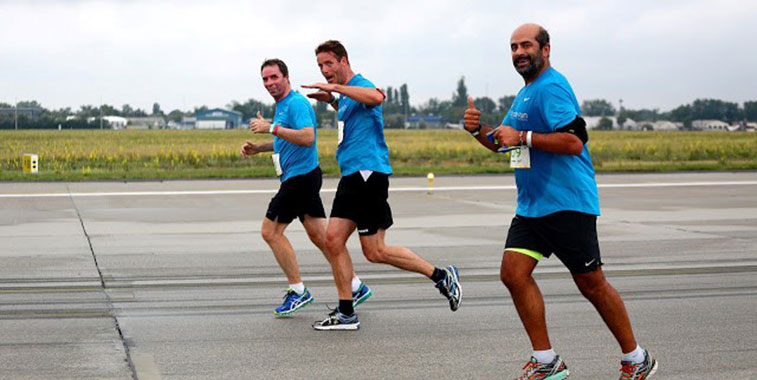 Kam Jandu: Budapest Airport’s CCC runs with Wizz Air CEO, József Váradi. Both would cross the line in 53.08 minutes with Jandu maintaining honour by nudging ahead of Váradi by a precious 10 seconds. Benefiting charities included the Suhanj! foundation for the welfare of handicapped people in Hungary. The wheelchair and partially-sighted competitors were constantly supported and enthusiastically applauded. All participants in the race also receive the “Bron’s Medal,” named for Brontë “Bron” Hogan, the late-12 year-old daughter of Paul Hogan, the publisher of www.anna.aero. “Brontë passed away in 2011 after a brave five-year battle with leukaemia during which she had two bone marrow transplants from a donor in Texas found by Anthony Nolan,” explained Hogan (53), a veteran of nine marathons who ran the race pushing his two-year old daughter in a jogging stroller in a personal best of 47 minutes. “I am grateful to Airbus, Budapest Airport, and all 920 sportsmen and women from the airlines, airports and air transport community who stepped-up to take part on the day – Bron would be honoured and you can wear your medals with considerable pride.”