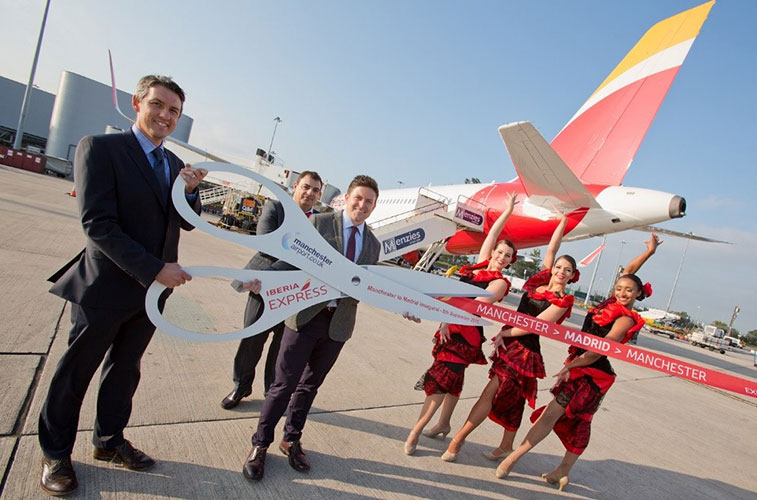 Iberia Express launched its latest route to the UK from Madrid on the 8 September in the form of a thrice-weekly service to Manchester, a sector that will then operate twice-weekly from the end of October for the remainder of W15/16. The carrier, a subsidiary of Spain’s national carrier, Iberia, also serves Edinburgh and London Gatwick from the Spanish capital, with the airline also serving London Heathrow from other Spanish airports.

Iberia Express was set up on 6 October 2011 by IAG, and commenced its first flight operations on 25 March 2012. The main intention of the airline was to operate European routes that were unprofitable when flown by mainline Iberia, and to make them viable by the new carrier operating the sectors with lower running costs. In its short history, Iberia Express has become the fourth biggest airline to fly from Madrid, with over 6 million passengers having flown and 50,000 flights operated within the carrier’s first two years of operation. In 2013, a report by FlightStats confirmed that Iberia Express tops all other European airlines in terms of punctuality. The airline operates an all-A320 fleet, of which a majority have been passed to the company from mainline Iberia. 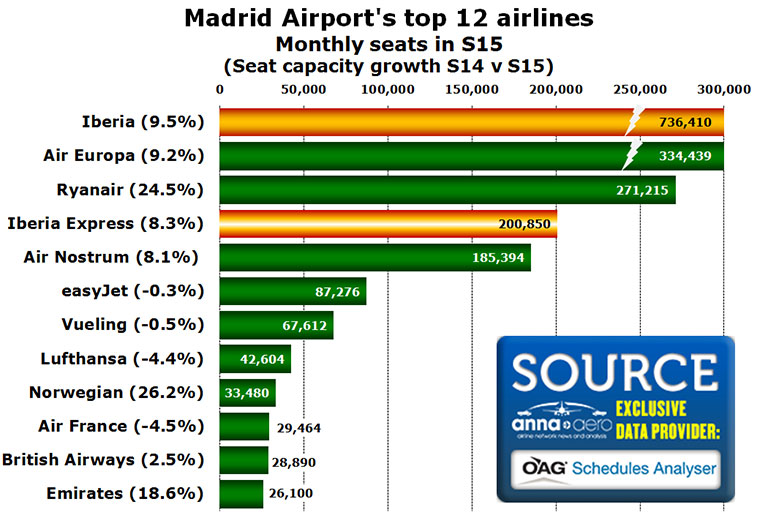 Iberia Express remains the fourth largest airline from Madrid (highlighted in Iberia Express colours in the table above) in S15, the same position it held last year. What is interesting to note however is that mainline Iberia (highlighted in Iberia colours), the number one carrier from the Spanish capital, has seen a greater growth in seat capacity in the past 12 months of 9.5% when compared with that of Iberia Express’ 8.3%. Overall, Iberia Express occupies 7.8% of seat capacity from Madrid, down only 0.1% from the 7.9% which it occupied last year, a result of Madrid seeing two additional carriers operating services from the facility according to OAG. 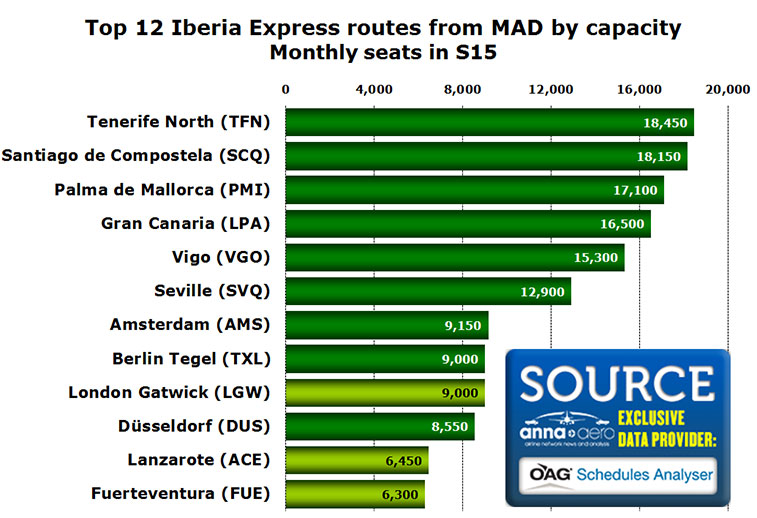 After reporting a growth in seat capacity over the past 12 months of 9.8%, the 1,770-kilometre sector to Tenerife North overtakes Santiago de Compostela to become the carrier’s number one route from its Madrid hub, although the latter is also reporting growth of 3.3% in seat capacity. Since last year, three new airports have entered the top 12 when compared to the same time period of 2014 (highlighted in light green), with Frankfurt (no longer served by Iberia Express), Malaga and Tenerife South no longer being in the top 12. London Gatwick goes straight into the top 12 at ninth spot, tied with Berlin Tegel, after the airline launched services to the airport from the Spanish capital on 28 March according to OAG, operating with an 11 times weekly frequency. Also joining the top 12 party from Madrid are Lanzarote and Fuerteventura, two routes which have both been operated by Iberia Express since the airline commenced service. 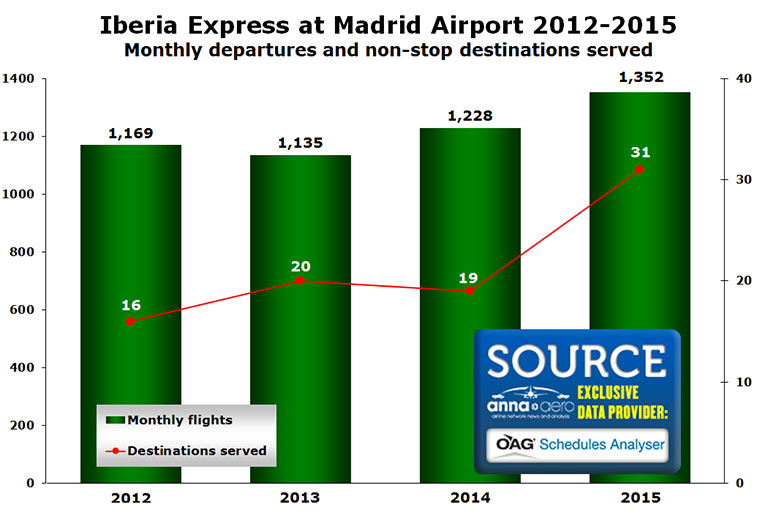 The following table aims to delve a little deeper into the numbers behind the third graph.

An analysis of OAG Schedules Analyser data for September 2015 reveals that only three routes of Iberia Express’ operation from Madrid are operated alongside mainline Iberia operations. The destinations are Athens, Düsseldorf and Gran Canaria. The following table shows the share of capacity between the two airlines on the sectors, and the group’s overall capacity share of the route.

Where is next for Express….

According to anna.aero’s new route database, Iberia Express currently has no new routes planned for S16 from its Madrid hub, and it is also worth noting that neither does mainline Iberia, making it interesting to think as to what cities will be the next destinations for the subsidiary. When looking at Iberia Express’ route map (as shown below), we can see that there is a very even geographical spread in relation to the location of western European airports served by the carrier, with key capital cities such as Amsterdam, Berlin, Dublin, London and Paris being served from Madrid. Of the international routes served from Madrid, eight are capital cities. In relation to the potential future routes for Iberia Express, the main focus will possibly be the transfer of services from mainline Iberia to Express which could potential include Brussels, Budapest (launched 2 June), Florence, Hamburg, Milan (Linate or Malpensa), and Rome Fiumicino.

In relation to new routes for the Iberia group that have the potential to be served under the Express brand, one could be Oslo Gardermoen, a European capital currently not served by mainline and is currently only served by Norwegian. With Iberia Express having oneworld alliance advantages opening up connections to Latin and South America, it would give them the edge over Norwegian on the sector. Another potential destination would be Helsinki, which is currently served by fellow oneworld member Finnair. It is worth noting though that LCC Norwegian also operates to the Finnish capital.

Within the domestic network, the key route most likely to be transferred from mainline is Barcelona. With this lucrative domestic route seeing strong declines in traffic since the development of high speed rail, the national carrier may want to reduce costs on the city pair by using the Express model to help increase profit margins, operating alongside Vueling. Other potential domestic routes that could be switched from mainline to Express include A Coruña, Asturias and Santander. 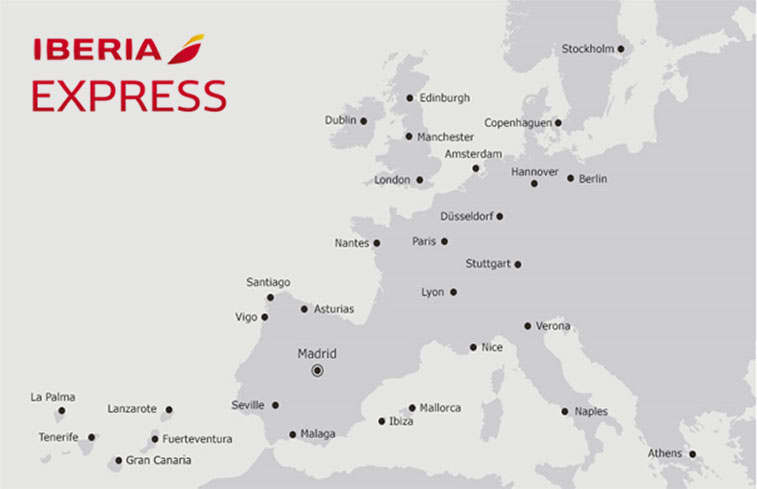