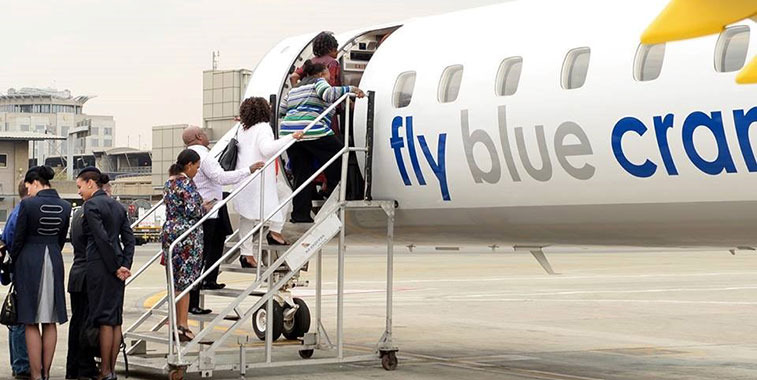 On 1 September, Fly Blue Crane became the third new carrier in the last 12 months to launch service in the South African domestic market. The ERJ 145 operator joins FlySafair and Skywise in attempting to break the virtual duopoly in the domestic market. South African Airways and its low-cost subsidiary Mango, along with Comair’s British Airways franchise flights and its own low-cost kulula.com operation currently dominate the domestic scene.

With a population of around 55 million people (around 10% fewer than Italy) and covering an area about three times the size of Japan, South Africa’s airports only handled 35.2 million passengers in 2014, according to ACSA (Airports Company of South Africa). The country’s three main international airports in Johannesburg, Cape Town and Durban account for over 90% of that traffic. After double-digit growth between 2005 and 2007, passenger numbers fell in 2008, 2009, 2012 and 2013, but grew in 2010, 2011 and 2014. Data from ACSA reveals that in each of the first six months of 2015 total passengers across the country’s three main airports has grown by 3.9%, as a result of which demand has now grown in 11 of the last 12 months, the exception being September 2014. 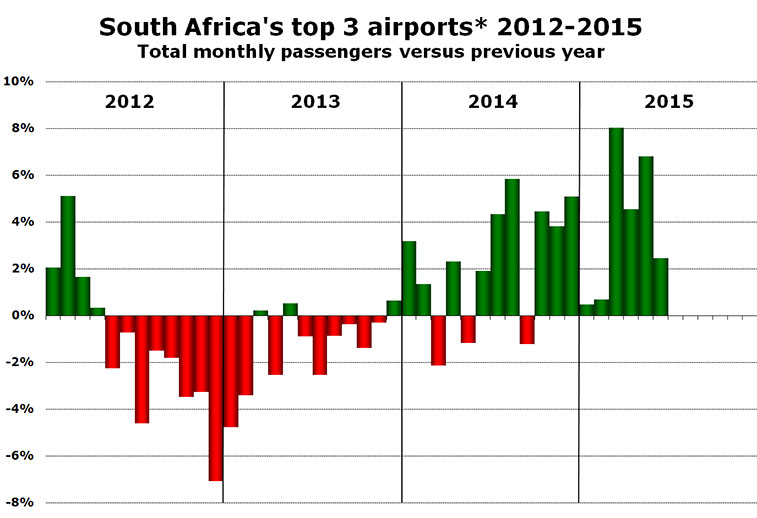 Analysis of OAG schedule data for September 2015 and September 2014 reveals that seat capacity is up just over 8%. Domestic routes account for around 70% of departing seat capacity across the country’s airports, and the total number of domestic seats is up almost 11%, partly due to the emergence of new carriers FlySafair (which launched in October 2014) and Skywise (which launched on 5 March 2015). Another new domestic start-up, Fly Blue Crane, began operations at the beginning of September, but its schedule data is not yet showing up in OAG figures. All of these new carriers will be mindful of what happened to 1time and Velvet Sky among others. 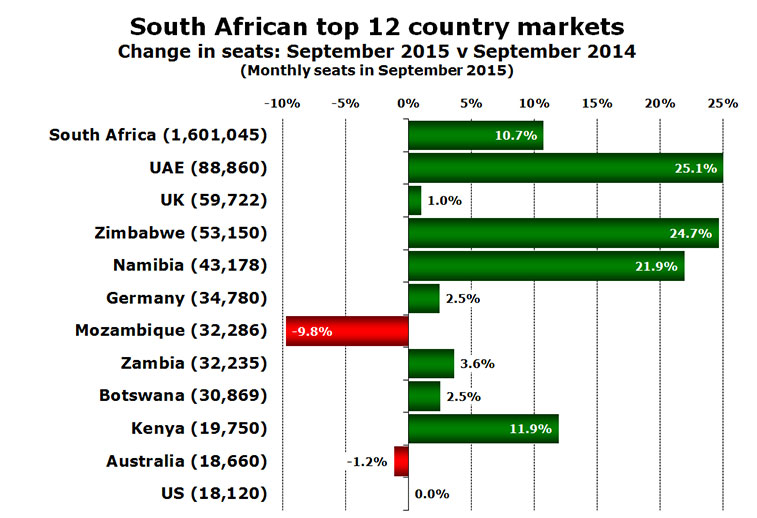 Among the leading country markets, the UAE is now the leading international destination, and has seen seat capacity growth of 25% in the last 12 months, partly due to Emirates adding a fourth daily flight from Dubai to Johannesburg and South African Airways launching daily flights at the end of March 2015 from Johannesburg to Abu Dhabi. The route is already served by Etihad Airways with whom SAA is operating a codeshare on this new service.

Zimbabwe and Namibia have also seen capacity growth of over 20% in the last 12 months, while the leading European markets of UK and Germany have each grown by less than 3%. Two other leading long-haul markets, Australia and the US, have seen virtually no change in seat capacity.

anna.aero will be at World Routes in Durban later this week

At the end of this week, Durban will host the annual World Routes event at which anna.aero will be producing its legendary 100-page-plus daily magazines, crammed with show news, exhibition stand interviews, Strategy Summit reporting and pictures from the various outstanding social events. If you are there and have some exciting news you want to share with everyone, make sure you track down one of our editorial team who will be there. If you can’t make it, check out the magazines when they appear as free downloads on our website after the event.