GOL becomes the sixth carrier to operate from Suriname; Fly All Ways to become the seventh On 25 August, GOL became the latest carrier to fly to Suriname when it launched a new twice-weekly (Tuesdays and Saturdays) service to the capital Paramaribo from Belem, a route which recently won the anna.aero ‘Arch of Triumph’ competition. The addition of GOL to the Suriname country market has not helped seat capacity grow, with overall capacity down 1.3% for S15 when compared with last summer.

With a population of 560,000, most of which live on the country’s north coast, and a geographical area of just under 165,000 square kilometres, Suriname is the smallest country in South America. The country is only served by one commercial airport which is located in the capital, Paramaribo, however research by anna.aero shows that in total the country has 15 airfields with IATA codes, most of which are served with small regional services from the capital. However it is worth noting that the airlines that operate these services are not included in the country analysis due to them not being published in OAG Schedules, with some of them, such as Blue Wing Airlines, seeing a varying schedule from week to week according to the airline’s website. 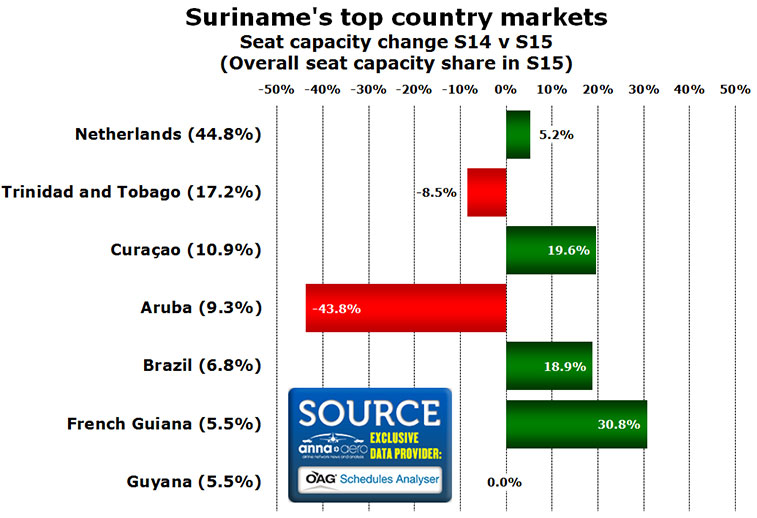 After seeing a seat capacity increase of 5.2% when compared with the same time period of S14, the Netherlands remains the number one country market from Suriname, which is of no surprise due to the strong historical link between the two nations. On a side note, Suriname is the only country in South America with Dutch being the number one language spoken. The 7,519-kilometre sector between Paramaribo and Amsterdam is served by KLM and Suriname Airways, with Amsterdam being the only long-haul route served by latter, which is flown using the carrier’s sole A340-300. 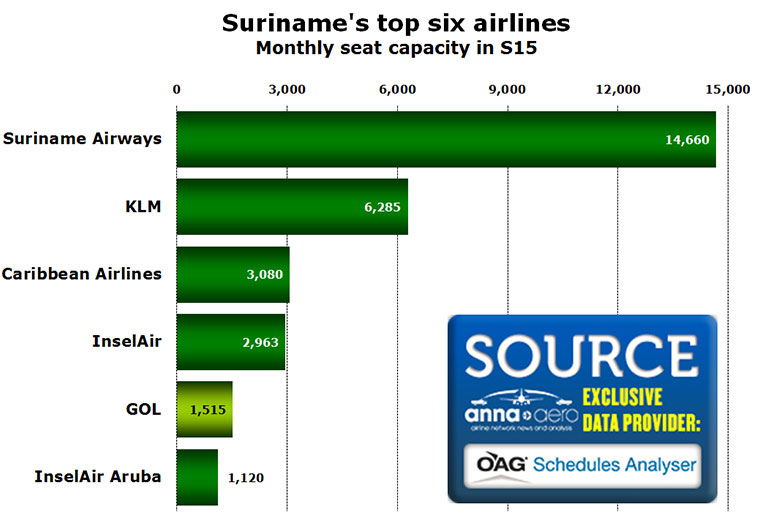 Suriname Airways way ahead of the rest

Although national carrier Suriname Airways is only reporting a seat capacity increase of 0.9%, it remains number one out of Suriname. The nation’s second biggest airline KLM, which is up 1.0% when compared to the same time period of last year, occupies 21% of overall seat capacity, a result that is dwarfed by Suriname Airways which controls 49%. Of the remaining four carriers, Caribbean Airlines is down -10%, InselAir is showing a decrease in seat capacity of -52% and sister carrier InselAir Aruba also reporting a decline of -22%. GOL (highlighted in light green) is new to Suriname in S15, after launching services to Paramaribo from Belem on 25 August.

When anna.aero’s Assistant Editor Jonathan Ford recently corresponded with Andrew Muller, Superintendent of Airport Operations at Paramaribo Airport, over future potential services from Paramaribo, he informed us of the latest airline to join the Suriname network, Fly All Ways. Muller suggested that the airline is hoping to commence services from Paramaribo to Georgetown in Guyana and Barbados in the not too distant future. 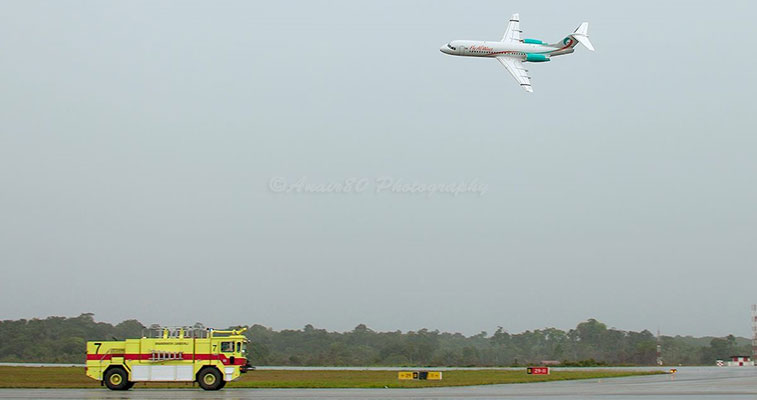 A Fly All Ways F70 does a fly-past of Paramaribo while the anna.aero award winning fire crews watch on. The airline is expected to operate services from the Suriname capital to Georgetown in Guyana and Barbados, information revealed to anna.aero’s Jonathan Ford by Andrew Muller, Superintendent of Airport Operations at Paramaribo Airport.