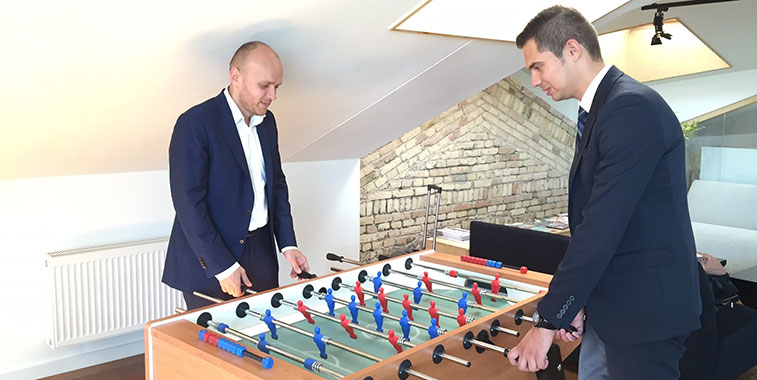 Representing the fastest growing leisure airline in Europe in the table football derby against anna.aero, Simonas Bartkus (Head of Marketing Department, Small Planet Airlines) is also known as the fastest scorer at this sport, due to hitting Vlad Cristescu’s (Business Development Associate, anna.aero) net one second after the referee’s whistle.

Small Planet Airlines (formerly known as FlyLAL Charters) is a European leisure carrier that commenced operations in 2009 since when it has emerged as one of the fastest growing independent leisure carriers on the continent. The main airline is headquartered in Lithuania, but it operates three other subsidiaries in Poland, Germany as well as Thailand. In fact, it currently holds an Air Operator’s Certificate (AOC) in both Lithuania and Poland, but plans to receive two more, in Germany and Thailand respectively by the start of next summer. Recently, the business strategy of Small Planet has paid off with profits soaring as the airline witnessed €8.2 million in Earnings Before Interest and Tax (EBIT) in 2014, when compared to €1.7 million in 2013. Following, a 37% increase in revenues for the first half of 2015, the airline hosted a special press briefing last week at its headquarters in Vilnius, giving anna.aero’s Vlad Cristescu a chance to catch up with Small Planet’s Head of Marketing Department, Simonas Bartkus.

anna.aero: What have been the biggest challenges of becoming the fastest growing leisure airline in Europe?

Simonas Bartkus: The biggest challenge was to maintain profitability while expanding rapidly. The first half of 2015 was extremely challenging because we have incorporated seven new aircraft into our fleet and hired an additional 300 crew members. We are more than pleased that we managed to post positive numbers while growing.

aa: How do you decide which markets to operate in?

SB: As you are aware our business model requires working closely with tour operators and based on their requirements/needs we decide which routes or markets to fly into. Nonetheless, we also have a selection of markets where we want to show our presence, with Poland offering major opportunities. We commenced Polish operations in 2012 and since then we grew massively with eight aircraft being based there now. In fact, around 60% of our total revenues are generated in the Polish country market. Besides Poland, Germany is a strategic step that we have been considering for quite some time. Finally, in order to be a sustainable business, Small Planet continues to operate in the Asian markets by addressing the seasonality to improve the balance between winter and summer seasons.

aa: How do you differentiate your product from your competitors?

SB: Firstly, our main strength over our competitors is that we are proud of passionate customer service. Generally, charter operators do not care much about the passenger experience, but we are investing €6 million into this matter. For instance, our staff undertakes a carefully designed training programme, while most of our profit is invested in expanding passenger comfort. Thus, we are taking further steps to improve the passenger experience, namely refurbishing completely our cabins for S16 by adding brand new seats (including premium economy seating), LED lighting and in-flight entertainment. Talking about competition in Europe, we mainly compete with low-cost airlines, but also with other charter operators, such as Travel Service, Germania and Enter Air.

SB: Last year we handled around 1.2 million passengers, posting a 21% increase over 2013 figures. However, considering our impressive growth in the first half of 2015, we are expecting over two million passengers this year.

aa: What are you plans for W15? Where have you identified business opportunities?

SB: This winter we are going to maintain our presence in the European market. The eight aircraft that are currently based in Poland will be reduced to no more than three for the winter season. We will keep operating from our home market – Lithuania – and we will also continue our services in Italy. The highlight of W15 will be flying for the first time from United Kingdom, namely from London Gatwick. In addition to this, we will commence flights from Germany to the Canary Islands.

aa: Would you consider scheduled operations in the future, considering Air Lituanica ceased operations this May?

SB: We do not see any opportunities in introducing scheduled flights from Lithuania in the coming future.

aa: Where do you see Small Planet Airlines in five years’ time?

SB: Even though we have grown extremely rapidly over the last years, we still believe the airline will maintain its trend of growth in the future. We also see the airline operating in completely different markets to fight seasonality, with capacity being moved between Europe and South East Asia.

SB: We are planning to expand our fleet to 20 units by next summer, all being A320s carefully selected for lowest cost and highest reliability. In fact, we will take delivery of four new A320s and return the two 737-300s back to their owners.

aa: What is the aircraft split between your subsidiaries?

SB: We have a 50/50 split between the Lithuanian and Polish subsidiaries. Nonetheless, with the German AOC being granted, we will move two aircraft to the German subsidiary.

aa: What are your intentions with regards to the German market?

SB: Our intention is to establish a German air operator’s certificate and to operate services under the German registration, basing aircraft at both main and regional airports across the country. We already created a new identity in Germany this May – Small Planet Airlines GmbH. The management of the subsidiary will be in the hands of Andreas Wobig (who was awarded the fastest airline CEO at bud:runway run held on 5 September) and Oliver Pawel, who were previously with Germania. The German AOC should be granted before the start of S16.

aa: Historically, you have been working with Buthan Airlines (W13) and Sky Angkor (W14 and W15); are you targeting another Asian partner to decrease seasonality of activities during the winter?

SB: We are in discussions with a number of other Asian partners as we are looking for additional business opportunities in the region. The cooperation with Buthan Airlines, which involved flying passengers from Bangkok to Paro in Buthan, was a short-lived project. Following this, we began looking for long-term opportunities in the area and the contract with Sky Angkor was secured for at least five years. As a result, Small Planet will fly tourists to Siem Reap in Cambodia from Chinese and South Korean cities. 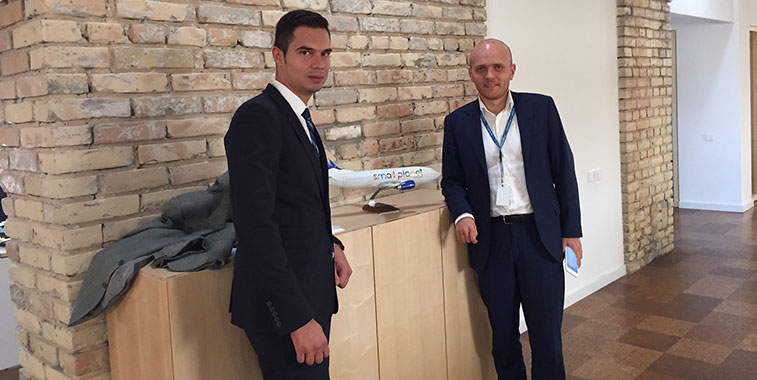 Simonas Bartkus, Head of Marketing Department, Small Planet Airlines confessed to anna.aero’s Vlad Cristescu that the airline will return its two 737-300s back to their owners by next summer, when it will operate an all-A320 fleet.