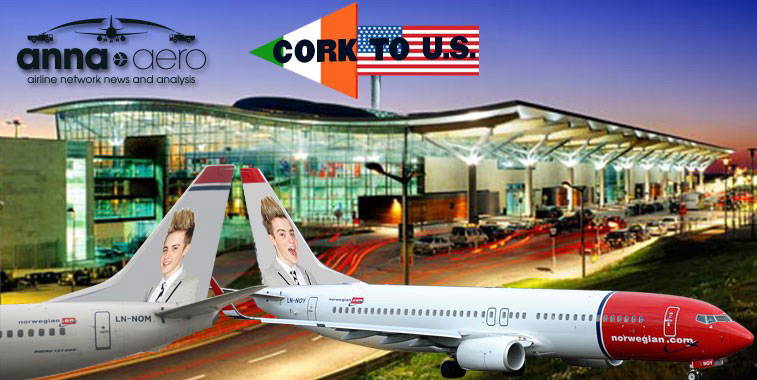 Twin US routes. Cork Airport has landed a pair of US routes – namely to Boston (launching next May) and New York (launching in 2017) – making the battle for US to Ireland passengers a three-airport competition with Dublin and Shannon. Listen up Cork Airport and Norwegian ‒ whatever ludicrously cheap rate Jedward offers you to attend the launch of the services, please, please, please don’t book them.

Norwegian has today announced plans to launch new direct low-cost transatlantic services from Cork to Boston (next May) and New York (in 2017). The new routes will be the only transatlantic flights to operate from Cork, in an Irish-US market that has been traditionally dominated by Dublin and Shannon. In addition, a new Cork to Barcelona route, to be operated up to five times weekly, will also be launched by Norwegian next summer. Rather than utilise Europe’s third largest LCC’s fleet of 787s for the job, Norwegian will seek to extract the benefit of Ireland’s most-westerly location on the fringes of Europe, and use 737 equipment for its US services.

Only two airports in Ireland currently have direct non-stop services to the US ‒ Dublin and Shannon ‒ with the former commanding 83% of weekly seats, using OAG Schedules Analyser data.

For S15, Shannon has 1,239 weekly seats to Boston, while over at Dublin, the Irish capital has 4,123 weekly seats to the US city. All 21 weekly services are flown by Aer Lingus across both airports. If Norwegian flies five weekly flights using its 189-seat 737-800s, it will command 15% of all weekly seats between Ireland and Boston, assuming Aer Lingus does not alter its operations between now and next summer. The extra 945 weekly seats added by Norwegian will see Dublin’s share of the Ireland to Boston market drop from 77% this summer to 65% in S16, with Shannon falling from 23% to 20% next year.

Commenting on the LCC’s decision, Norwegian CEO Bjorn Kjos said: “Norwegian is leading the way in offering affordable transatlantic travel and with the new generation aircraft we have on order, we now have exciting plans to offer low-cost flights from Cork to Boston in 2016 and Cork to New York in 2017.

“We are delighted to offer a long-awaited service from the US to Cork and the southern parts of Ireland which will create huge business, leisure and tourism opportunities. Our new Cork to Barcelona route is also an exciting addition to our growing network.”

Cork Airport boss Niall MacCarthy added: “We’re delighted that Norwegian will operate Cork Airport’s first transatlantic service. Cork Airport has a robust hinterland with a well-developed industrial base and a fantastic tourism product. We’re sure there will be strong demand for these new transatlantic services from both business and leisure passengers. We look forward to working closely with Norwegian and our local partners to promote these new services and to grow passenger traffic at Cork.” 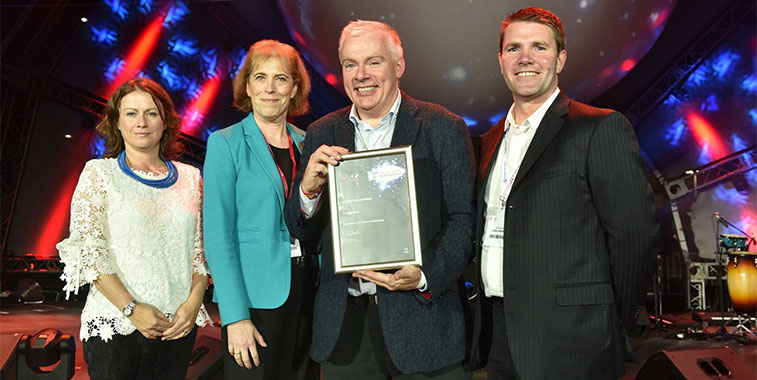 Pictured this week in Durban picking up its ‘Highly Commended’ trophy in the Under Four Million Passengers category at the World Routes Marketing Awards from Katie Bland, Director, Routes (left) were: Cork Airport’s Head of Aviation Marketing Anita Gackowska; MD Niall MacCarthy; and Head of Finance and Commercial, Clive Power. The question is, would they have beaten category winner Halifax Airport in Canada if Norwegian’s news had broken a little earlier?