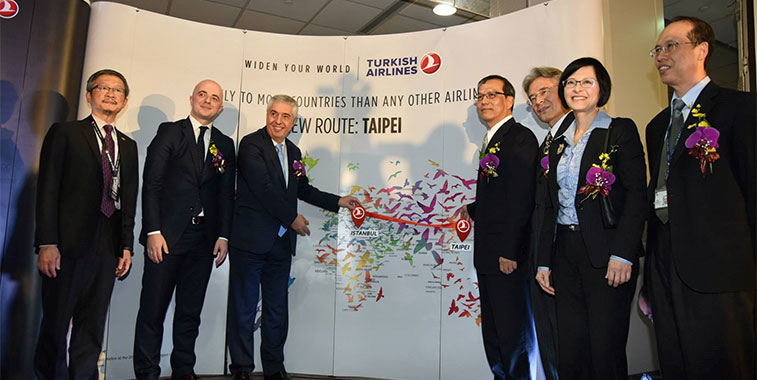 Turkish Airlines now serves over 240 destinations from its Istanbul Atatürk Airport hub. At the end of March Taipei Taoyuan in Taiwan joined the Star Alliance carrier’s network. Next stop at the end of October are Durban in South Africa (via Johannesburg) and Miami in Florida.

Turkey’s aviation market continues to be the star performer in Europe with passenger numbers across the country’s airports up over 9% in the first eight months of 2015, driven by 13% growth in the domestic market compared with just 5% growth on international routes. While international growth has been relatively modest, since the beginning of 2015 Turkish Airlines has added service to many new international destinations including Abuja (Nigeria), Ahwaz (Iran), Bari (Italy), Graz (Austria), Karlsruhe/Baden-Baden (Germany), Khudzhand (Tajikistan), Manila (Philippines), Porto (Portugal), San Francisco (USA), Taipei (Taiwan). The Star Alliance carrier now serves more destinations non-stop from a single airport (Istanbul Atatürk) than any other carrier anywhere in the world, while Istanbul’s second airport at Sabiha Gökçen has in recent years been one of the fastest-growing airports in Europe, thanks primarily due to the rapid growth of local LCC Pegasus Airlines. 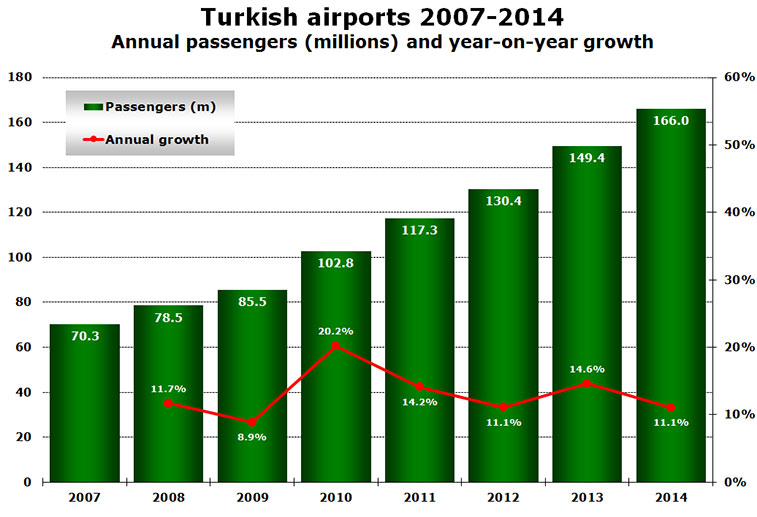 Between 2007 and 2014 Turkey’s airports grew by 136% from just over 70 million passengers to 166 million. If traffic continues to grow at 9% for the rest of the year the nation’s airport will handle an estimated 181 million passengers in 2015. Istanbul Atatürk may even pass Frankfurt to be Europe’s third busiest airport after London Heathrow and Paris CDG. As of the end of August, Frankfurt was still just ahead with 41.48 million passengers for the first eight months of the year versus 41.04 million for the Turkish airport. Due to the different seasonality profiles, Frankfurt was the busier airport in April, May, June and July with Istanbul Atatürk handling more passengers in January, February, March and August. 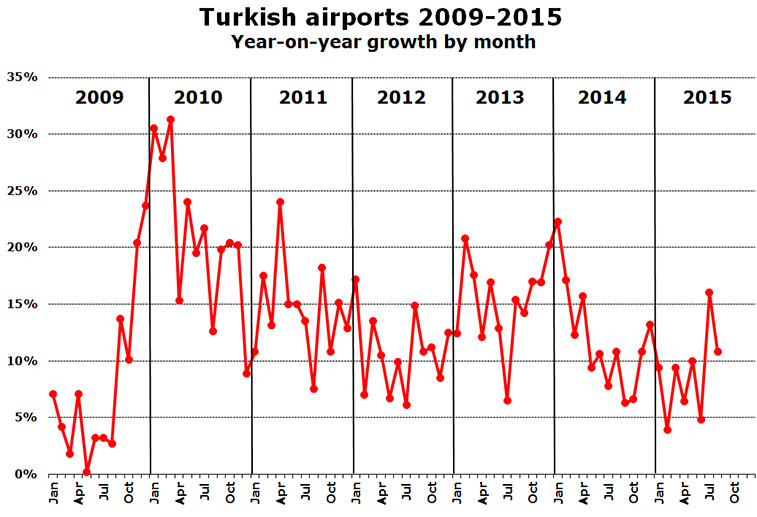 Only twice in the last six years has year-on-year traffic growth across all Turkish airports fallen below 5%, in February and June of this year. However, July’s traffic growth of over 15% was the first time this level of growth had been reported since April 2014.

Only Antalya not growing among Turkey’s ‘1 million club’ airports

Among the 15 Turkish airports that handled over one million passengers in 2014, 14 are growing in 2015, the exception being Antalya. The rapid growth of nearby Antalya Gazipaşa airport, where traffic is up 30% in 2015, has resulted in a modest decline in Antalya’s traffic. Three airports have reported growth of between 19% and 21% so far in 2015, with Gaziantep leading the way. Located in the western part of the Southeastern Anatolia Region and only 100 kilometres north of Aleppo in Syria, Gaziantep is Turkey’s sixth most populous city. Its air traffic growth this year can be attributed to an increase in domestic passengers (+23%) who account for well over 90% of the airport’s throughput. 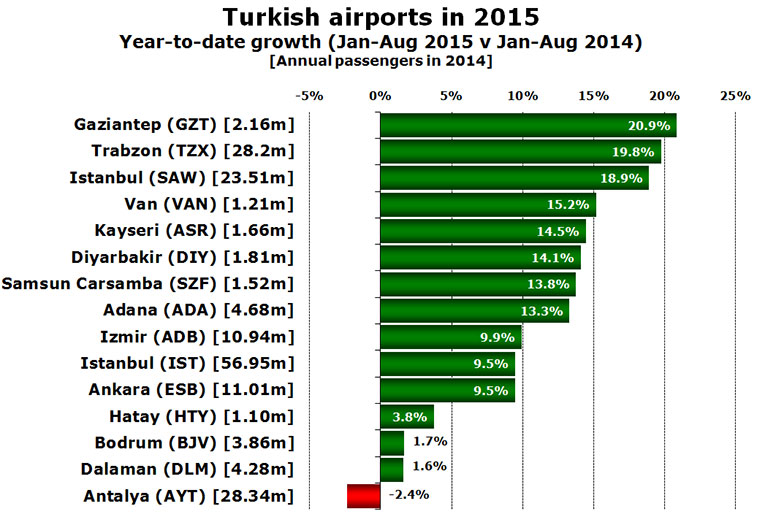 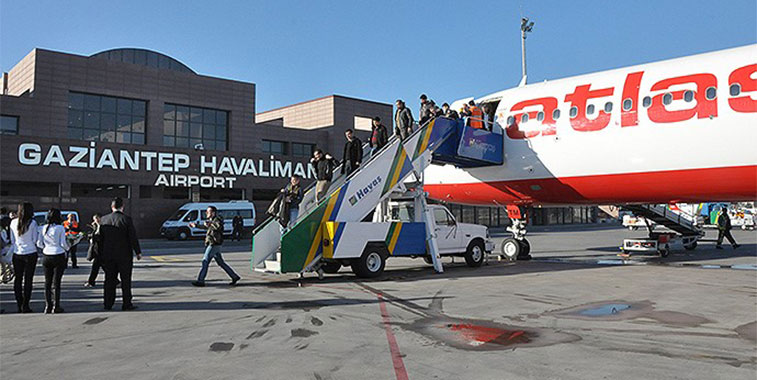 Gaziantep Airport is just 100 kilometres north of Aleppo in Syria. Traffic is up 21% this year at the airport, driven by a 23% growth in domestic demand. Flights to Istanbul are provided by AtlasGlobal, Onur Air, Pegasus Airlines and Turkish Airlines.