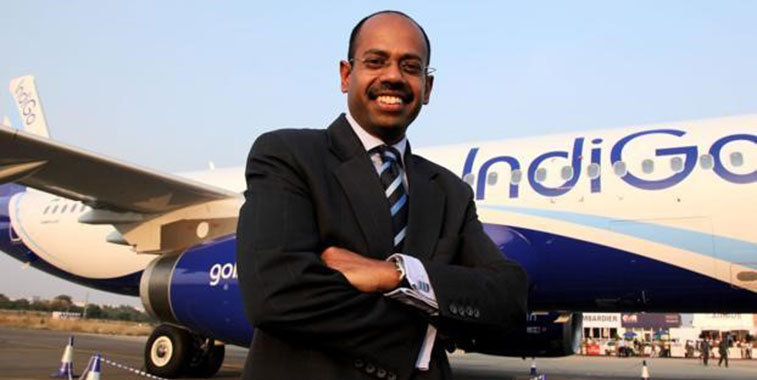 IndiGo recently celebrated their ninth birthday, and on 15 August the airline made a commitment of ordering 250 A320neos. Aditya Ghosh, President of IndiGo, commented on the announcement: “This new order further reaffirms IndiGo’s commitment to the long-term development of affordable air transportation in India and overseas. The additional fuel efficient A320neo aircraft will enable us to continue to bring our low fares and courteous, hassle-free service to more customers and markets and will create more job opportunities and growth.”

Following 107 airframes being handed over in July, Airbus and Boeing maintained their delivery performance in August by distributing a total of 108 aircraft to various customers, up 10 units when compared to the same month of last year. The American manufacturer maintains the lead over its European rival in terms of aircraft delivered in August, by distributing 20 more units to its respective customers. In the same month last year, it is worth noting that Boeing delivered 25 more aircraft. With this, Boeing strengthened its lead in the 2015 delivery race to 102 units, up from 82 in July.

Having delivered more than 100 aircraft for the seventh month in 2015, the two manufacturers have once again recorded an impressive total. The combined deliveries of both producers for the eighth month of the year was 108, of which 64 came from Boeing and 44 from its European counterpart. Notably, the American manufacturer has increased its total deliveries for August when compared to the same month of last year by three units. Airbus also delivered more aircraft than in August 2014 by seven units. Overall 66% of deliveries in August were narrow-body aircraft, with 34% wide-body. However, when looking at the wide-body market, Boeing produced 64% of aircraft, down from the 84% majority it held over Airbus last month. 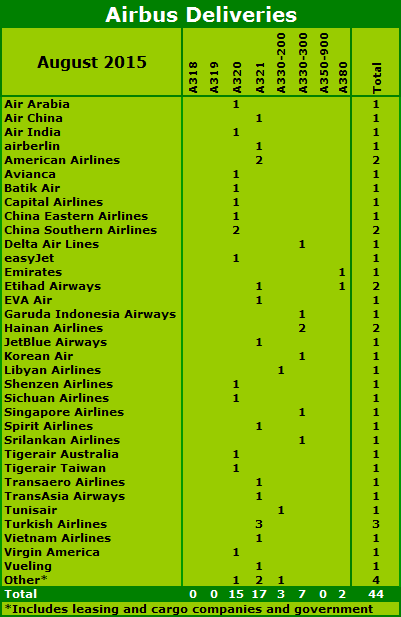 Airbus ended August with a total of 44 units being delivered to airlines, which is five less airframes than the amount delivered in July. However, it is seven more than what it delivered in the same month last year. Over the period of January to August in 2015, the European producer delivered 397 units, representing an increase of eight units on the same time period analysed in 2014.

For the month of August, single-aisle deliveries were led by the A321 (17 units, down three from July), with a total of 32 single-aisle aircraft being provided to carriers around the world (down 13 when compared to last month). This means that Airbus produced seven fewer narrow-body aircraft than Boeing in August. It is worth noting that last month the European manufacturer produced more than its American counterpart in single-aisle units. Turkish Airlines and American Airlines were the biggest recipients of the A321 in August, collecting three and two units respectively. China Southern Airlines was the biggest recipient of the A320, accepting two into its fleet in August.

Looking at wide-body deliveries, Airbus handed over 12 airframes in August, eight more units than July. Following on from the delivery of two A380s in July, the European producer handed over the same amount in August, with both going to MEB3 carriers; one to Emirates, the largest operator of the type in the world, and the other to Etihad Airways. Korean Air took delivery of its first 747-8 in August, an aircraft for which the carrier has a firm order for 10 units. The delivery marked Korean becoming the only carrier of both the freighter and passenger variant of the 747-8. Korean Air Executive VP, Walter Cho, can be seen checking out the amenities of the airline’s shiny new first class cabin. Korean Air plans to put it into revenue service once final crew testing has been carried out. 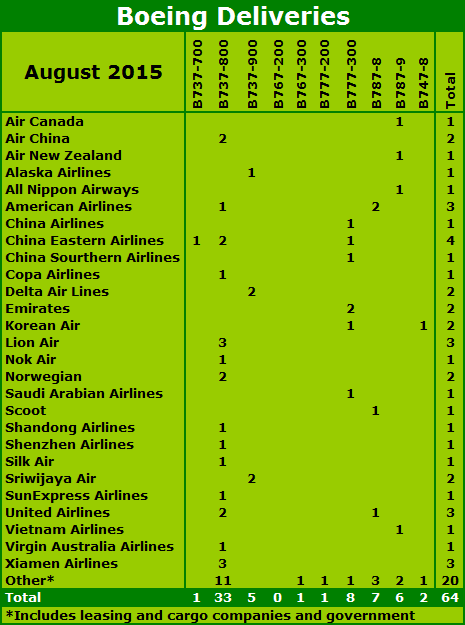 Boeing closed August with a total of 64 unit deliveries, six more than in July, and three more than in the same month of 2014. Nevertheless, the American producer’s total for the first eight months of 2015 is 499 aircraft, an impressive 38 units (9.6%) more than in the corresponding period last year.

Airlines received a total of 39 single-aisle units from Boeing in August, two more than in July, and two more than August 2014. It was also seven more than what Airbus produced, a considerable change from last month when Boeing produced eight less units than its European counterpart in single-aisle units. Lion Air and Xiamen Airlines were the largest recipients of the 737-800 in August, as both incorporated three of the variant into their fleets. It is also worth noting that China Eastern Airlines took delivery of one 737-700 last month. In total, 17 airlines were delivered single-aisle units from the American manufacturer during August, one more than the 16 carriers in July, and equal to that of June. Nonetheless it should be noted that 11 of the deliveries were to leasing companies. Overall 44% of single-aisle deliveries from Boeing last month were to Asian airlines (up 3% from July), with 15% being North-American carriers (down 4%). The rest of the world and leasing companies occupied the remaining 41%.

Analysis of wide-body deliveries reveals that Boeing handed over a total of 25 units to airlines in August, four more than in July. The result also shows that the American producer delivered one more wide-body airframe than it did in the same month of 2014. Boeing handed over 13 787s in August, up one from the 11 units it delivered in July. American Airlines was once again the largest recipient of the 787-8, taking delivery of two of the variant, the same amount it received from the manufacturer in July. However leasing companies in total took delivery of five 787s. It is also worth noting that one 747-8 was delivered in August to Korean Air, whereas none of the type were delivered in July.