Lufthansa using CityLine/Jump off-shoot to add destinations at its Frankfurt base this winter; US accounts for six of top 10 routes by ASKs Jumping all the way to Tampa. On 25 September, Lufthansa’s CityLine/Jump off-shoot began operations on behalf of the parent from Frankfurt to Tampa in Florida, using high-density configured A340-300s transferred from the mainline carrier’s fleet. The US country market is the second most important for Lufthansa at its main base.

When measured in ASKs, Lufthansa is the sixth largest airline in the world, beaten only by Delta Air Lines, United Airlines, Emirates, American Airlines, and Southwest Airlines when considering this week’s operations (using OAG Schedules Analyser data). Looking back to S06 using this metric, the German national carrier was still in sixth spot, but was the #2 in Europe, behind American, United, Delta, Continental Airlines and British Airways. The Star Alliance carrier’s main base has been Frankfurt Airport for decades, as it is today. It currently commands 67% frequency share at Germany’s largest and Europe’s third largest hub, a figure that has gradually improved (or worsened depending on your views on control of slots at hubs) over the last 10 years, having been 61% in September 2006. 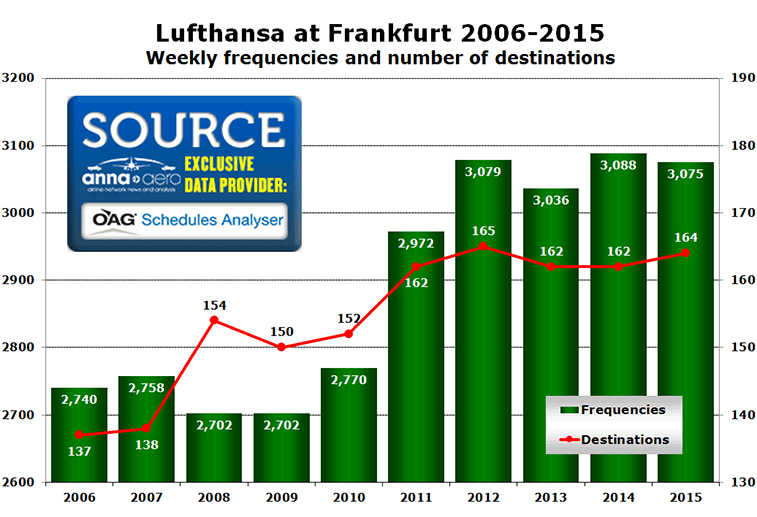 Source: OAG Schedules Analyser for w/c 22 September for each year.

Matching this recent increase in dominance at Frankfurt are the airline’s number of weekly frequencies and destinations. Our data elves thought that the step-change in weekly frequencies (up to around 3,000) and points served (up to over 160) which was observed in 2011 was due to the airport opening its fourth runway. However, this piece of infrastructure did not ‘officially’ open until October 2011 (we know that because we were there), which might mean that the runway’s capacity was being utilised before (our data is looking at week commencing 22 September) the ‘official’ opening on 21 October. Answers on a postcard please to the Editor…

This summer, Lufthansa operates to 67 country markets from its main hub, one more than in the same week last year ‒ gaining Iceland, with Reykjavik/Keflavik thrice-weekly services having launched on 2 May ‒ and significantly more than its southern German hub in Munich, which, according to OAG Schedules Analyser data, by comparison offers just 47 country markets in S15. Capacity to Lufthansa’s second biggest country market (as measured by seats) ‒ the US ‒ has been enhanced this week, with the start of a Lufthansa CityLine/Jump-operated five times weekly route to Tampa on 25 September.

While at many European airports, and indeed at the continent’s main hubs, domestic capacity would appear to be being replaced (and forced onto alternative land-based modes) with more lucrative international and intercontinental flying, this does not appear to be the case for Lufthansa at Frankfurt. In the last 12 months, it has added another 1.7% more seat capacity into its domestic routes, seeing it pass the 100,000 weekly seats mark. Capacity within Germany therefore remains at a healthy 18.5% of all seats offered by Lufthansa at its main hub, no doubt underlining the importance of home-market feed for the airline. 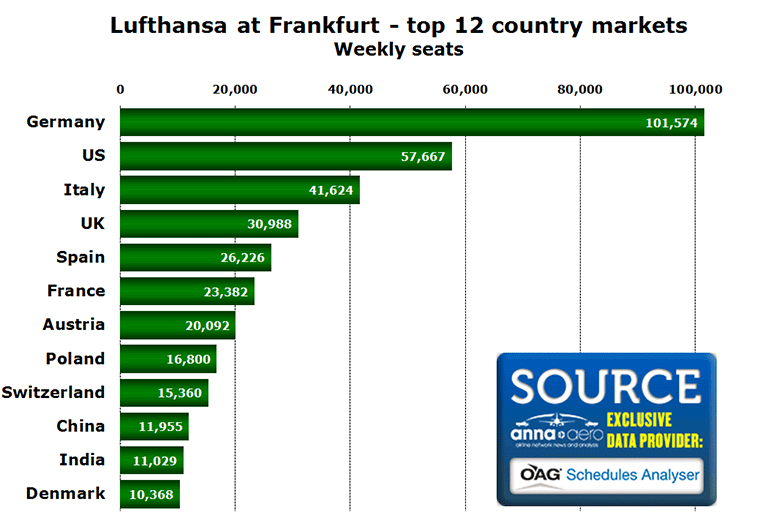 Demark, which has witnessed a 16% increase in seats since last September (partly thanks to the launch of services to Aalborg at the start of the summer season), has replaced Russia within the airline’s top 12 country markets, with the latter seeing a 32% culling of weekly seats as the frosty political and economic relations continue. Poland also produced double digit growth (10%) in the last year, due in part to a new four times weekly service to Bydgoszcz, launched on 29 March. The market experiencing the most significant fall in capacity is France (down 4.5%), which when combined with Spain’s 7.3% increase, has seen the latter leapfrog the former into fifth spot behind the UK.

Lufthansa’s capacity to Europe’s second largest airport and competing hub at Paris CDG has been reduced from the levels planned a year ago, with nearly 11% fewer seats available. Rome Fiumicino encountered the next largest drop in offered seats, with a 5.2% annual decline. At the other end of the scale, three airports mustered double-digit increases over the same period, led by Brussels (+13%), and closely followed by London Heathrow (+11.3%) and Hamburg (+10.9%). The top 12 routes in September 2015 represented 26% of all of Lufthansa’s Frankfurt capacity, up marginally from the 25.7% recorded in 2014. 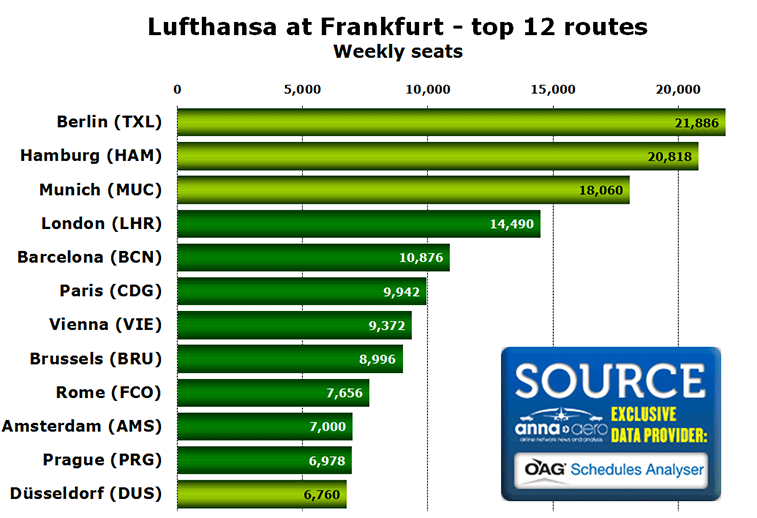 Hannover drops out of the top 12, only to be replaced by another domestic connection to Düsseldorf, which was 15th in the 2014 listing. The biggest route for Lufthansa outside of Europe is now Shanghai Pudong, in 15th position overall. Despite annual seat growth of less than 1% since last September, the Chinese route has climbed from 17th spot it held in 2014, jumping ahead of last year’s biggest non-European route – New York JFK – which due to its 4% seat reduction has fallen from 16th to 17th. However, the 12% increase in weekly seats offered by Lufthansa to Los Angeles from its Frankfurt hub has seen it draw level with JFK, as both airports have a seven-day capacity of 6,111 seats.

In terms of ASKs Lufthansa’s top 10 routes from Frankfurt are dominated by US destinations, which feature six times. Los Angeles and Shanghai Pudong lead the way (both served double-daily) with almost 50% more ASKs than third-placed New York JFK. Rounding out the top 10 are Singapore, Chicago, Washington, San Francisco, Johannesburg, Seoul and Boston.

Luxembourg and Nairobi next

Looking ahead to what is left of 2015 and onto 2016, Lufthansa is planning to launch two further routes from its Frankfurt hub this October. After a 16-year hiatus in services, a four times weekly route to Nairobi ‒ operated again by its CityLine/Jump subsidiary ‒ is planned from 25 October, and on the same day the carrier will commence four daily flights to Luxembourg. In addition, CityLine/Jump-operated twice-weekly, A340-300 services to Cancún (8 December), Malé (9 December) and Mauritius (10 December) will be launched later in the year, with five times weekly services to Panama City pencilled-in for 2 March 2016.