In June Condor became the first carrier to operate European services (from Frankfurt) to T. F. Green Airport serving Providence on Rhode Island. This new route is one of over 100 seasonal services between the US and Europe, which are dominated by the three big US carriers. Providence is one of only five US cities that loses all of its European services in the winter.

According to anna.aero analysis of OAG schedule data, the US-Europe market is currently undergoing its longest period of sustained growth in a decade. By the end of this year, monthly capacity will have grown for almost three straight years beating the period of 31 months between March 2006 and September 2008 when year-on-year capacity was increasing. The impact of the global recession which started in the second half of 2008 can clearly be seen with capacity falling by over 10% in some months during 2009. While the recent growth in the market has not reached the double-digit peaks of 2008 and 2010/11, it has been maintained for a longer period. 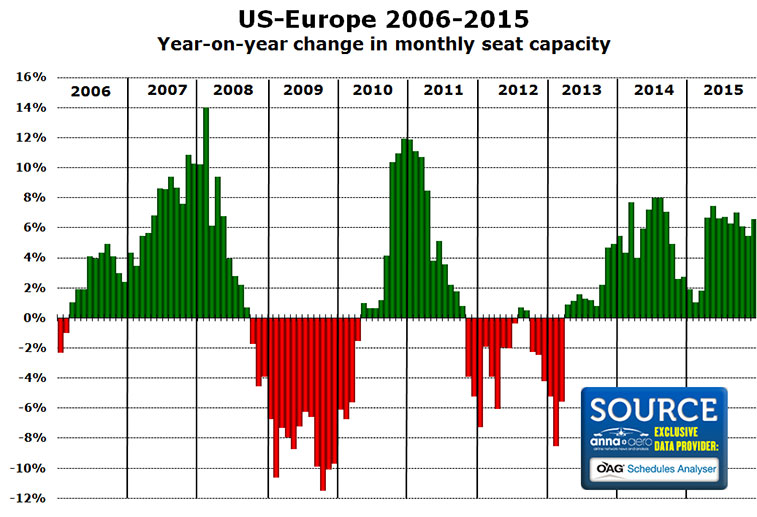 Over 25% of routes dropped in winter mostly by US carriers

Analysis of the US-Europe market comparing the peak summer schedule (for S15) with the off-peak winter schedule (for W15/16) reveals that the number of US-Europe services falls from 407 to 301, a drop of over 25%. In terms of seat capacity the reduction is even greater at 36%, as many routes see a reduction in frequency, aircraft size or both. The main culprits of this reduction in services are the US carriers, who operate the majority of seasonal services across the Atlantic. Between them American Airlines, Delta Air Lines and United Airlines operate almost 60 seasonal services to Europe. Europe’s leading long-haul leisure airlines account for over 20 seasonal services. 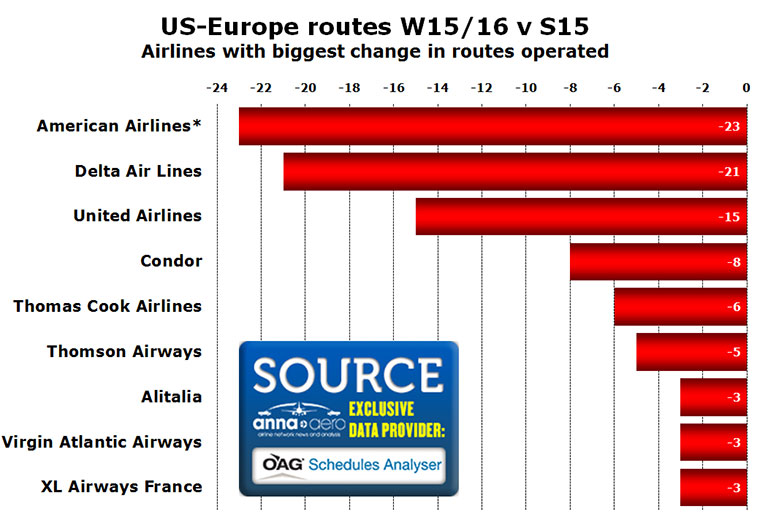 Paris, Rome and Venice seen as most seasonal destinations from US

Looking at airports on both sides of the Atlantic reveals that five US airports lose all transatlantic services in the winter. Anchorage and Fairbanks in Alaska (apparently popular with German tourists in summer), Pittsburgh, Providence and Orlando Sanford all currently have only seasonal services to Europe. Orlando Sanford has five services to the UK with Thomson Airways and one to Amsterdam with Arkefly but none of these as yet operate year-round according to OAG data. While a handful of airports lose all of their summer services, many US airports see a major reduction in European services. New York JFK loses 22 services between summer and winter followed by Chicago O’Hare (13), Newark and Philadelphia (nine each), and Los Angeles, Orlando Sanford and Washington Dulles (six each).

Several European airports also have only seasonal flights to the US. These include Athens, Bergen, London Stansted, Malaga, Naples, Newcastle, Pisa, Prague and Venice Marco Polo. Of these Venice Marco Polo might be considered the unluckiest as it has four US services during the summer months; Delta Air Lines flights from Atlanta and New York JFK, United Airlines from Newark, and American Airlines/US Airways flights from Philadelphia. All of these are operated daily during the peak summer period but vanish for winter. Clearly as far as US airlines are concerned Venice is a summer-only destination. 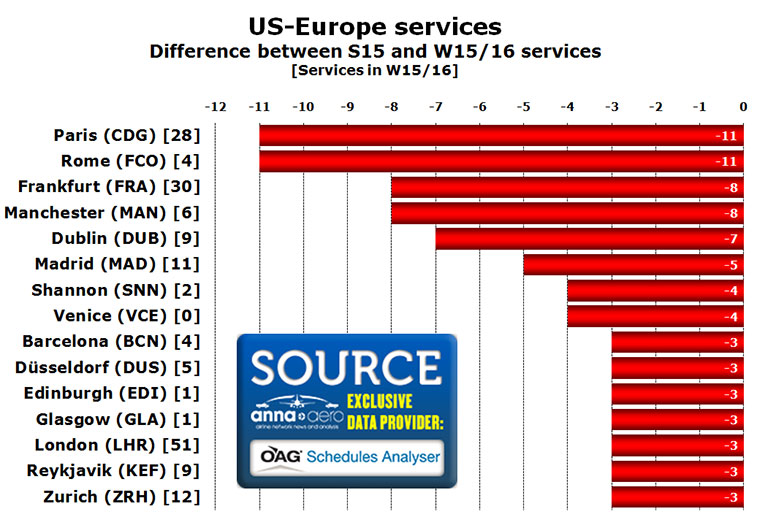 While Venice Marco Polo loses all four of its US service in winter, other European airports see even more services dropped for winter. Both Paris CDG and Rome Fiumicino see 11 services disappear during the winter season, though Paris CDG is still left with 28 while Rome Fiumicino is reduced to just four. Again, US airlines clearly see Paris and Rome as delightful summer vacation spots but with less appeal in winter. Manchester and Frankfurt’s prominent ranking in this graph is more to do with the dropping of services by Europe’s long-haul leisure airlines such as Condor and Thomas Cook Airlines than their seasonal appeal to US consumers.

Next year promises to see further growth in US-Europe capacity with the launch of several additional new routes. Norwegian plans to add Boston service from Copenhagen, London Gatwick and Oslo, as well as introducing services to Cork, the airport’s only scheduled transatlantic route. Icelandair will add Chicago O’Hare to its network, Turkish Airlines will head to Atlanta, SAS will connect Stockholm and Los Angeles, British Airways is off to San Jose in California, Delta is coming to London from Salt Lake City, Condor is off to Austin-Bergstrom and Thomas Cook Airlines is growing its US network from Manchester with launches to Boston and Los Angeles.