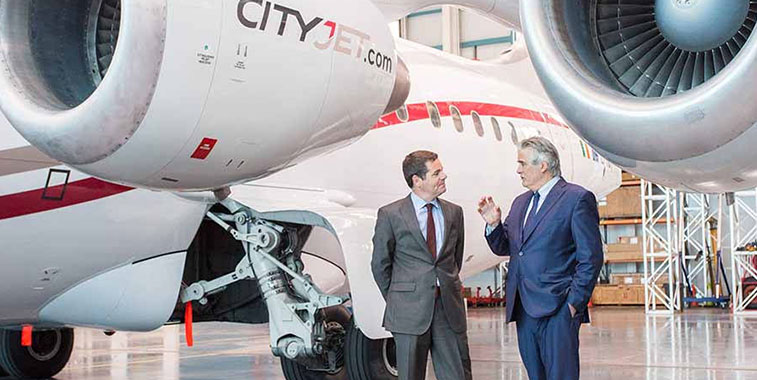 Paschal Donohoe, Irish Minister for Transport, Tourism & Sport, and Pat Byrne, CityJet Executive Chairman, unveiled the new CityJet brand last month in Dublin. The airline is currently finalising an order for up to 15 under-100-seat aircraft to replace its existing fleet of Avro RJ85s and Fokker 50s according to planespotters.net .

First established in 1992, CityJet commenced services on 12 January 1994 between Dublin and London City under an agreement with Virgin Atlantic Airways until 1997, when CityJet then used its own identity on the route. Now the regional carrier has grown to a fleet of 21 aircraft which is made up of 18 Avro RJ85s and three Fokker 50s according to planespotters.net, however VLM operates the latter variant. The airline currently operates under a wet-lease agreement with Air France on some of its regional services from Paris CDG, as well as numerous charter flights. Last month, the airline announced its major rebrand and livery at a press conference in Dublin. On 1 October, the airline also introduced its first services from Cork, in the form of a thrice-daily operation to London City. On the same day, the airline also announced that it had reached an agreement with SAS to operate some of its regional services from Helsinki, Oslo and Stockholm from 30 March 2016. As a result of the wet-lease agreement with SAS, CityJet will acquire 100% of the shares in the Star Alliance member’s subsidiary, Blue1, and has entered into an agreement with SAS on the wet-lease of eight new CRJ 900s.

All of these recent developments come after a prolonged period of instability for the carrier. In 2013, Air France decided to ‘untie’ its ownership of CityJet, one reason being the growing debts of the Air France-KLM Group at the time, and also the focus of the carrier’s development of its own regional subsidiary, HOP! On 19 December 2013, CityJet was purchased by Intro Aviation, a German-based company which is a specialist in turnaround consultancy in the aviation industry, which also sold off the VLM subsidiary in November 2014. Given all these changes, anna.aero looks to see how much of the airline’s operations are still involved with Air France and how the future may pan out for the regional carrier. 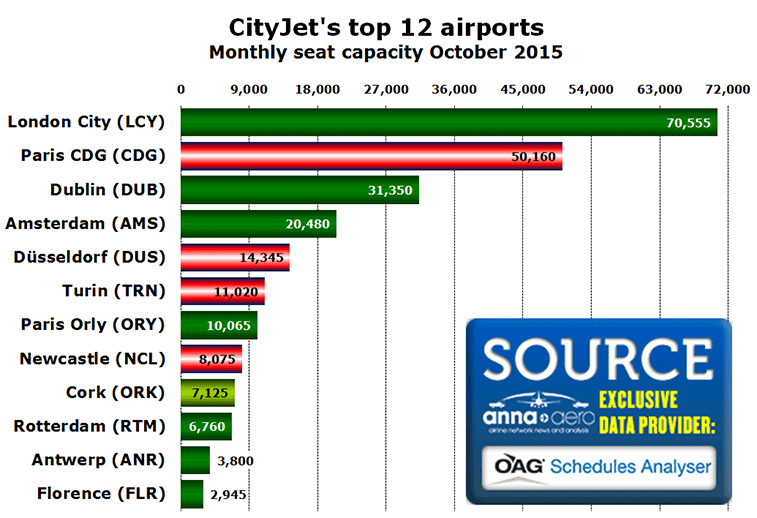 As can be seen in the graph above, the agreement that CityJet has with Air France still plays a major role in the operations of the airline, with four of the top 12 airports in the regional carrier’s network being dedicated only for CityJet flights operated on behalf of France’s national airline, specifically flights from Paris CDG to Düsseldorf, Turin and Newcastle (all highlighted in Air France colours). Outside of these operations, we can see that the recently launched service from Cork (highlighted in light green) to London City has meant it places in the top 12 in ninth position, overtaking Rotterdam, Antwerp and Florence. The other two airports that CityJet serves, but are outside of the top 12, are Hannover (Air France operations) and Nantes according to OAG data. Elsewhere in the network, Amsterdam is down 8.6%, Paris Orly is down 1.3%, while Rotterdam and Antwerp are both down 10% and 26% respectively in relation to seat capacity.

London City has witnessed an increase in seat capacity over the past 12 months of 4.3%, making it the second fastest growing airport in the top 12 for CityJet after Turin, which is up 44% due to consolidation of Air France operations. As well as Cork being new to the top 12, the other new additions are Düsseldorf and Florence, although neither have seen major increases in capacity when compared to last year.

In the past year, CityJet has lost 12 airports from its network. Ordered based on the size of operations in October 2014, the 12 airports that are no longer served are: Edinburgh, Stuttgart, Cardiff, Cambridge, Glasgow, Zagreb, Dresden, Nuremburg, Deauville, Brive, Jersey and Brest according to OAG Schedules Analyser. In relation to the ending of services from Cardiff to Edinburgh and Paris Orly on 30 June, the response from the airline was: “This is a result of Cardiff Airport’s authorities entering into a support agreement with another airline to serve these two routes in direct competition with CityJet.” The airline in question is Flybe, which in the past 18 months has established bases at both Cardiff and London City airports, both of which were CityJet’s bases, with the latter now being the only UK based operation for CityJet. The services out of Cardiff were served in agreement with Stobart Air. 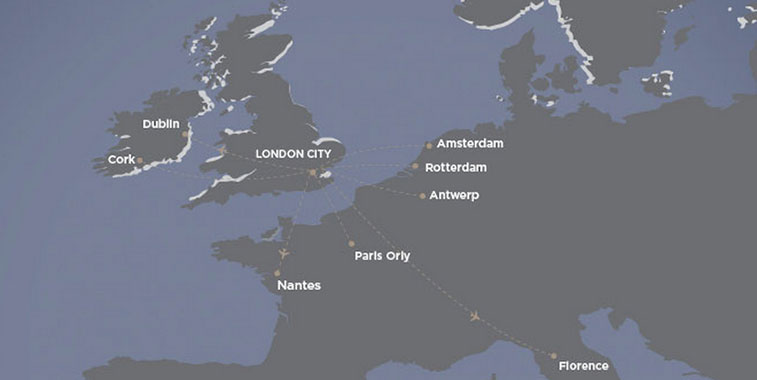 CityJet’s route map for October 2015. In the past 12 months, airports which the regional airline served with its own operations that have been dropped include Edinburgh, Cardiff, Glasgow, Cambridge, Deauville, Brive, Jersey, Dresden, Nuremburg and Stuttgart. 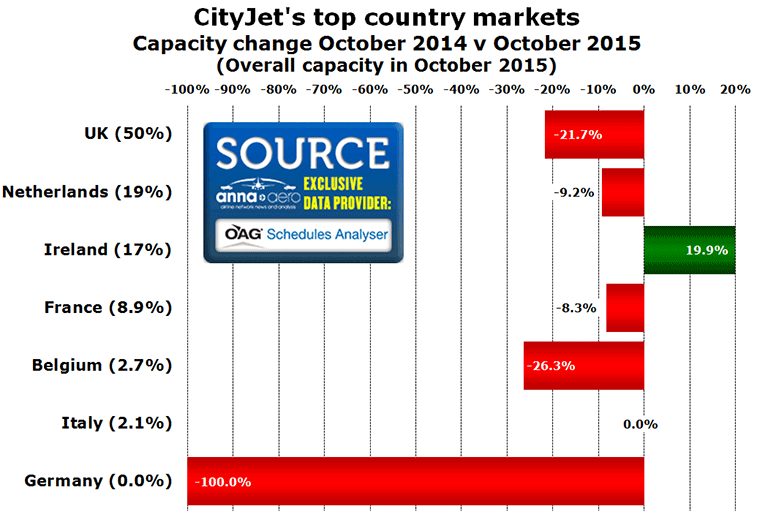 Within its own independent operations, CityJet has removed Germany from its network altogether, a result of scheduled services from London City to Dresden and Nuremburg ceasing. Of the six country markets that CityJet serves, only Ireland has seen an increase in capacity, a result of services to Cork being launched on 1 October. However when looking at operations from Dublin on their own, the airport pair with London City is down 14%, a reduction most likely due to the increased competition seen on the route following the introduction of Flybe on the airport pair, along with the strong competition seen from British Airways’ CityFlyer operation as well.

Rebrand to become its own identity; acquires Blue 1 from SAS

In September, CityJet unveiled to the world its own identity since becoming independent of Air France ownership. Commenting on the new brand identity, Pat Byrne, CityJet Executive Chairman, said: “This is a new look for a new era as we continue to grow our passenger numbers and invest in our staff and fleet. Today is a special day as we bring CityJet forward with a new dynamic branding, which I would refer to as inside-out branding as it based hugely on what our staff across the airline determined it should be.” However it is worth noting that the carrier still operates some services on behalf of Air France.

While it has now become in its own rights an individual airline, on 1 October, the regional airline announced that it had won a major contract to operate SAS regional routes, and placed an order for up to 14 CRJ 900s. The major deal for the airline will see it operate a wet-lease contract for SAS, covering a network of regional routes from Helsinki, Oslo and Stockholm. Commencing in March 2016, CityJet will operate services on behalf of the Star Alliance carrier using eight new aircraft, with an option to increase to 14 aircraft in 2017. Byrne commented on the deal for CityJet by saying: “The SAS contract has immense strategic significance for CityJet’s growth and development, strengthening its market position across Europe and facilitating ongoing investment and growth. Securing this contract with SAS is a major vote of confidence in our team and in our expertise, and will help support future business expansion”. As part of this collaboration, CityJet is acquiring 100% of the shares in SAS subsidiary Blue1, which Byrne commented on by saying: “We are also keen to benefit from the experience and knowledge of the Nordic airline industry that the acquisition of Blue1 will give us.”

As already stated, CityJet is finalising agreements for up to 15 under-100-seat aircraft for its own individual fleet. Three aircraft manufacturers are most likely in the running for the deal with the regional airline – Bombardier, Embraer and potentially Sukhoi, with an announcement expected imminently. However with the CRJ 900 deal with SAS, Bombardier has perhaps become the front runner as it will mean lower operational costs for CityJet if it has some sort of fleet commonality with the same manufacturer. Given the airline’s need for an aircraft with the performance to get in and out of London City, this will undoubtedly be a consideration too. In relation to future network development, and with London City being the main hub of its operations, this is most likely where future launches will be taking place, with Scandinavian routes being most likely to help connect possibly with the new SAS operations. 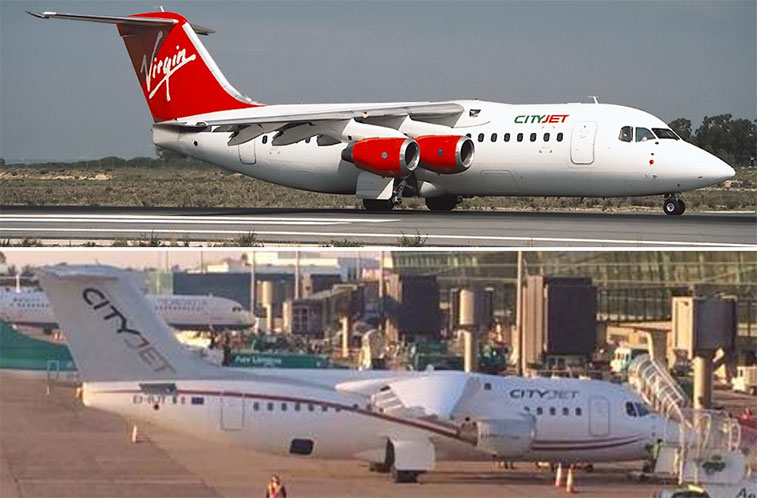 The before and after. CityJet has changed a lot over its +20-year history, however its strategy of short-haul regional flying has remained constant. The freshly-rebranded aircraft in the lower picture was noted on stand at Cork on 30 September, being prepped for the inaugural service to London City which commenced the following morning.