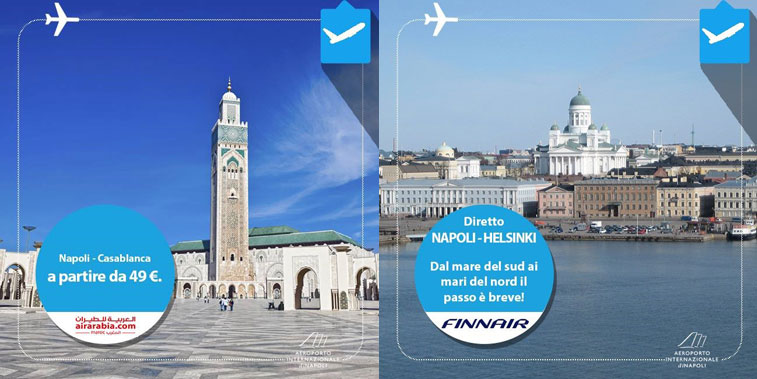 Naples Airport doesn’t seem to go in for route launch celebrations, but that hasn’t stopped a number of airlines launching new routes to the Italian airport this summer including Air Arabia Maroc (from Casablanca) and Finnair (from Helsinki). This has helped passenger numbers grow by over 5% in the first 8 months of 2015.

Naples Airport, located in the town of Capodichino, around six kilometres north of downtown Naples, is Italy’s eighth busiest airport. In the first eight months of this year passenger numbers are up 5.3% indicating that the airport is likely to pass the six million passenger milestone for the first time in 2015. Traffic growth is being driven by international services where passenger numbers are up 10.5%, while domestic traffic has declined by 2%. Between 1996 and 2007 passenger numbers more than doubled at the airport, but since then the annual passenger throughput has hovered between five and six million passengers. 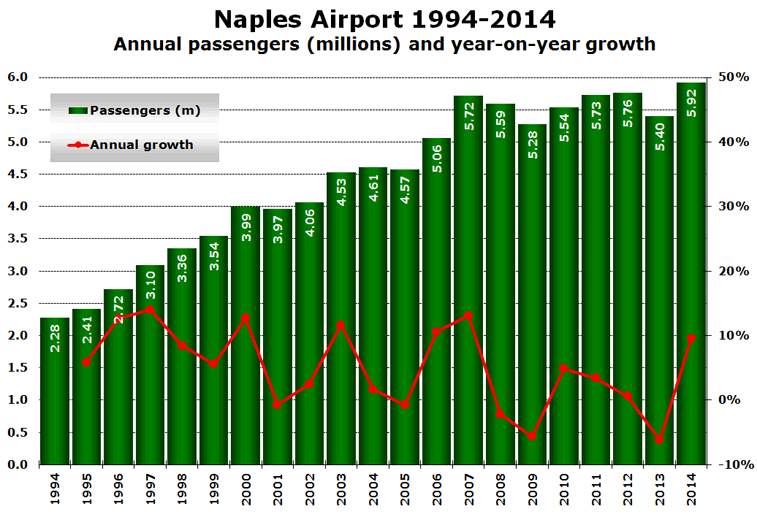 The airport’s seasonality profile has been stable in recent years, and scores a “good” 8.97 on anna.aero’s Seasonal Variation in Demand (SVID) calculator. Last year’s almost 10% boost in traffic can be attributed in large part to the decision by easyJet to make the airport a designated base at the start of the summer season. This saw the UK-based LCC add five new destinations (Brussels, Catania, Corfu, Malta and Mykonos) to its existing network, which has been followed up this summer by a further three new routes, with flights from London Luton having been launched at the start of the W14/15 season. 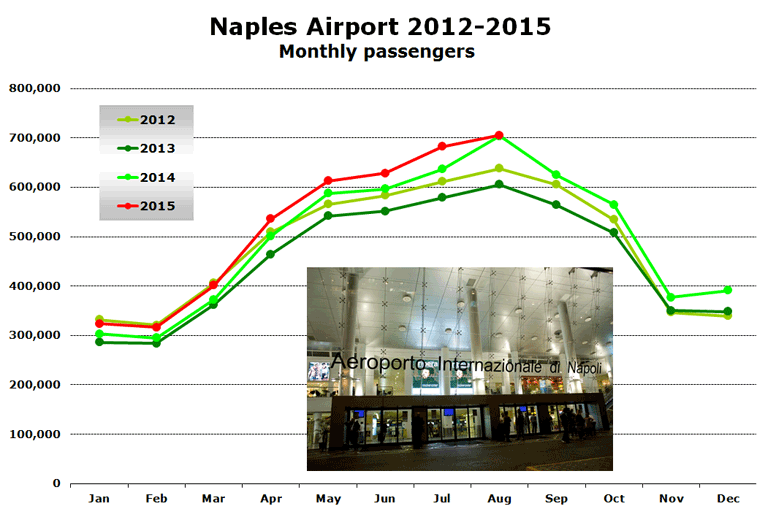 Milan and London are leading destinations

According to ENAC data, of the airport’s almost six million passengers in 2014, almost 1.1 million flew to and from Milan, with Linate flights carrying around 43% more passengers than Malpensa flights. London was the leading international destination, with London Gatwick the leading international route. Among the top 12 routes six are domestic and six are international (shown in bright green). In 2014, international destinations accounted for 57% of the airport’s traffic, with this segment of the market showing an impressive 18.4% growth. Domestic traffic by contrast fell by 0.5%. 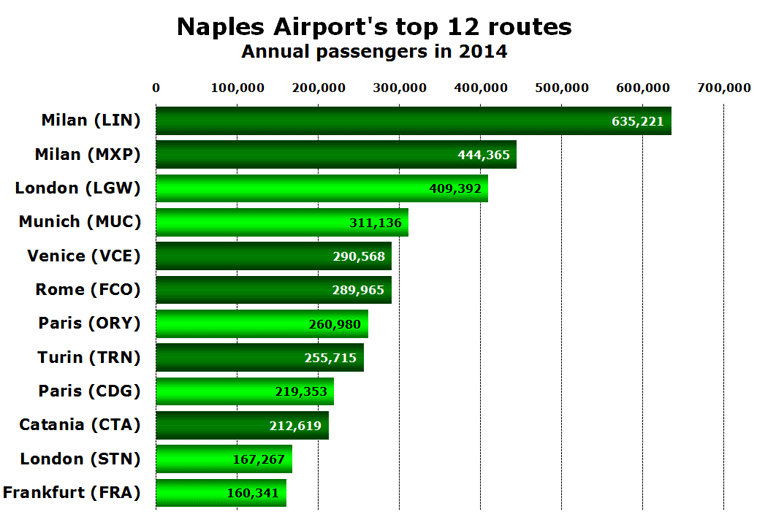 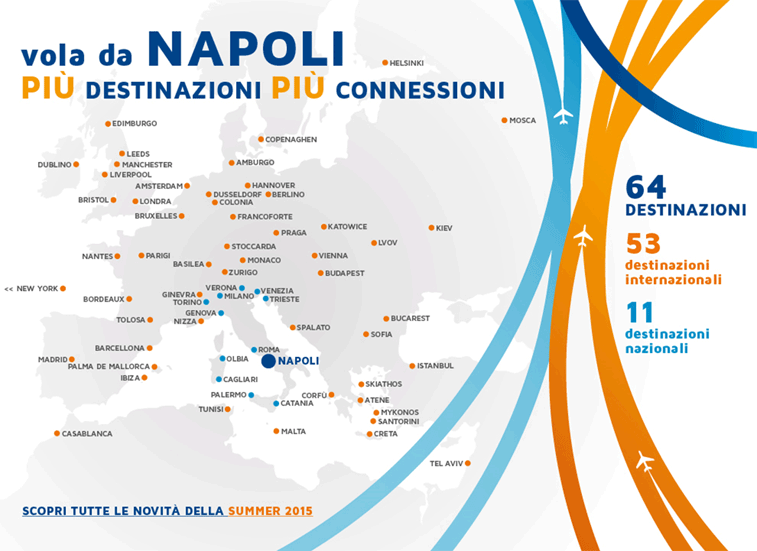 The airport lists 64 destinations for summer 2015 with Tel Aviv, Moscow, Helsinki, New York and Casablanca the most peripheral airports.

New services announced so far for the rest of this year and 2016 include easyJet starting flights to Lyon in mid-December, while Jet2.com will operate flights to the airport for the first time next summer with the introduction of seasonal flights to Edinburgh and Manchester.

34 airlines in Naples but where’s Ryanair?

easyJet is now well established as the biggest airline at the airport, accounting for around 27% of flights and seats during the peak summer period. According to OAG Schedules Analyser a total of 34 airlines operated scheduled services at the airport this summer. Apart from the top 12 in the following graph, other notable airlines offering flights at the airport include Aer Lingus, Austrian Airlines, Blue Air, Brussels Airlines, SAS, Transavia and Turkish Airlines. A significant absentee given its major presence elsewhere in Italy is Ryanair. 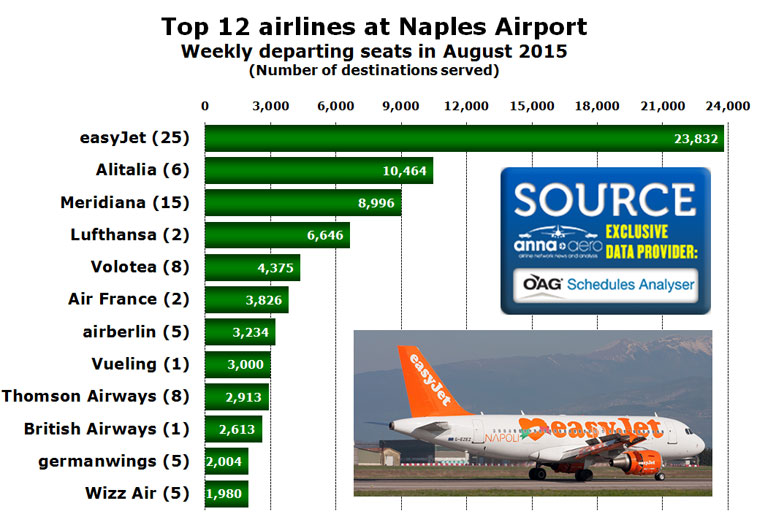