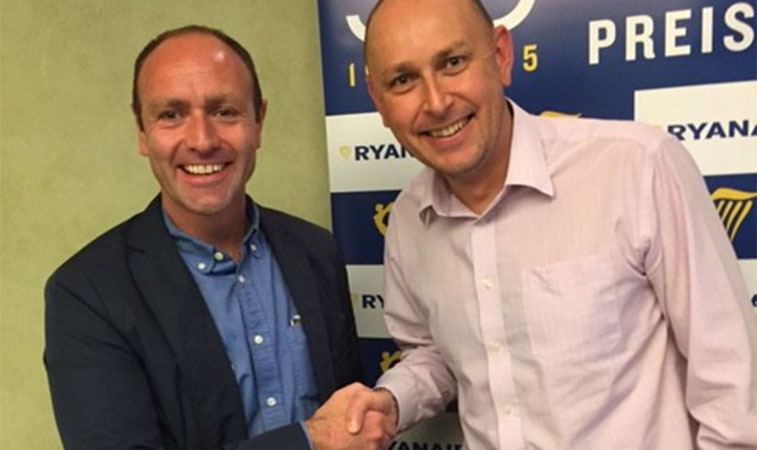 I’ve got more hair than you. Yeah, but I’ll always be taller than you. As well as trading insults, Ryanair’s Chief Marketing Officer Kenny Jacobs and anna.aero’s Editor Marc Watkins discussed the ULCC’s plans to expand massively in Germany over the next few years in Cologne last week: “The next five years in Germany will be really very interesting,” says Jacobs.

On the surface, this was just another stop on the Jacobs (Kenny; Chief Marketing Officer) and Kiely (Robin; Head of Communications) whirlwind European tour for the re-energised Ryanair. Date: 30 October. Location: Cologne Hilton. What are we doing: Eight new routes for S16 from Cologne Bonn base (although in true Ryanair style only one of them will be ‘new new’ for next summer (Malta), as the other seven (Copenhagen, Berlin Schönefeld, Gran Canaria, Milan/Bergamo, Porto, Valencia and Warsaw Modlin) have all been launched already for this upcoming winter season). What does this mean: With 40% year-on-year growth, representing an additional 700,000 annual passengers (up from 1.7 million passengers to 2.4m), Cologne Bonn, offering 19 routes in total next summer, is the fastest growing airport in the Ryanair network. However, just like an iceberg, it’s what is below the surface that really matters.

It is clear that Germany is top of the agenda for Ryanair at the moment, with 31 new German routes envisaged for S16, as it looks to improve its lowly #3 ranking (statistic according to Jacobs’ presentation – for anna.aero it is #4, behind Lufthansa, airberlin and germanwings – perhaps he added #1 and #3 together?) in terms of weekly seats. Interestingly, easyJet is #6, so the opportunity to expand in Germany appears to be ripe. “Whenever we get a new aircraft delivered to the fleet, our first thought is can we use it in Germany,” states Jacobs. He continues: “We anticipate growing quite rapidly and intend to take the opportunity to grow in Germany due to ongoing problems with Lufthansa [strikes] and airberlin [everything]. We plan on giving Lufthansa/airberlin/germanwings a hard time, while we give the German passenger a good time with our low fares.” That line has obviously been used before by Jacobs – just change ailing legacy carrier and country depending on where you are.

When considering the FIGUS group of nations above (Europe’s biggest air travel markets – with the exception of Turkey), Ryanair’s market share position in Germany – around 5%* ‒ is much lower than elsewhere. Indeed, even in France (7%*) and the UK (17%*) where it is only the #3 airline in terms of weekly seats, it outperforms the German market. The potential, mimicking the dominant presence it has in Spain (18%*) or Italy (26%*), is to grow three or even four times bigger. “We could easily grow our market share up to 15-20% by 2020,” suggests Jabobs. “The next five years in Germany will be really very interesting,” says Jacobs (*Note – these are figures from Ryanair).

Talking on the side lines of the press conference in Cologne, Jacobs opened up further on the expansion plans in Germany. “We are talking to everyone except Frankfurt. Southern Germany is particularly interesting. I could envisage Munich as a destination rather than a base for example.” Indeed, the next stop on the Jacobs and Kiely European tour was the Bavarian city. “Much like we do in Brussels [Charleroi and Zaventem] and Rome [Fiumicino and Ciampino] we feel that Munich could work alongside our existing operations at Memmingen.” Currently Ryanair flies to 13 German airports, including six bases following the recently announced base #73 of Berlin Schönefeld for S16.

When pressed on potential routes into Munich Jacobs seemed particularly keen to challenge the dominance of Lufthansa and British Airways in the London market – who between them control 77% of weekly seats on their respective Heathrow services – as well as Aer Lingus and Lufthansa to Dublin. Both would be operated with a high frequency competing service in the same mould as its recent successful shift in strategic direction.

During the press briefing Jacobs also confirmed that the airline was anticipating announcing a deal for feed into another carrier’s long-haul hub in the coming year. “We serve 83 airports into Dublin, and Aer Lingus has big US hub links from there; so yes, we’ve talked to IAG/Aer Lingus about the potential to feed.” He also confirmed that the ULCC has spoken to Virgin Atlantic Airways (feeding them at London Gatwick and Manchester); TAP Portugal (Lisbon); somewhat bizarrely, Norwegian (London Gatwick); “but not Alitalia.” If you had said five years ago about Ryanair looking to feed other airlines, you would still be locked-up now. Today, they are just full of surprises like that. What next – business class? Part of Ryanair’s ambitious expansion plans for the German market, the airline’s Cologne Bonn base will boast 19 routes for next summer, including the recently-launched service to Copenhagen on 2 September. “We could easily grow our market share up to 15-20% by 2020,” says Chief Marketing Officer for the ULCC Kenny Jacobs.