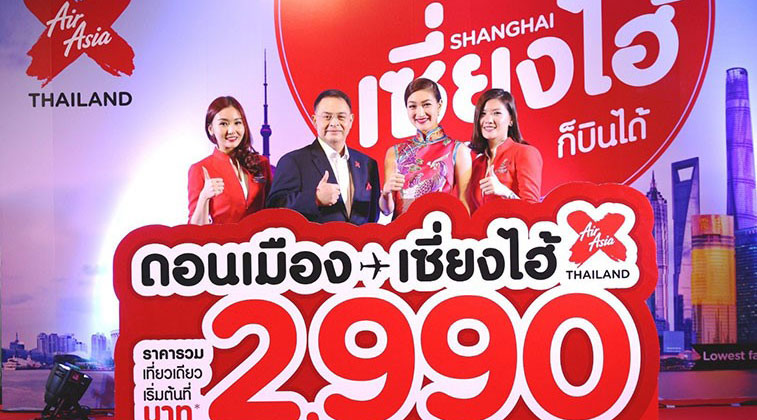 Thai AirAsia X launched its first service to China on 1 October linking Bangkok Don Mueang with Shanghai Pudong. The Thailand to China intra-Asian market is the fourth largest international market in the region, and it is the fastest growing top 12 country pair over the year registering a 56% increase.

An aviation powerhouse, Asia, and travel within it, shows no discernible signs of slowing down its capacity growth, no matter what is thrown at it – economic turmoil, virulent viruses or natural disasters. Sure, there have been ‘annus horribilis’ along the way, but these have merely been acknowledged with a slightly lower growth rate for the year in question, with the inexorable trend being one of capacity increases. The only thing that needs to be determined is the exact angle of the upwards trajectory. The region plays host to the 137th IATA Slot Conference in Singapore next month, where anna.aero will again be producing its show dailies, so we thought it would be a good time to appraise just how the intra-Asia market was performing before the network planning world arrives in the region.

Since 2006, the intra-Asia market has nearly doubled in size in terms of weekly seats, growing from just over 14 million to around 27 million this October. The individual markets range in size from the massive Chinese domestic market with close to one million weekly seats, down to tiny Tajikistan to Afghanistan which offers just 125. Indeed, domestic markets dominate the region altogether, with the nine biggest markets being all domestic ones – namely China, Japan, Indonesia, India, Thailand, Malaysia, South Korea, Philippines and Vietnam. The fastest growing of these homeland markets is Thailand (+35%), which narrowly edged out the rapidly developing Vietnamese domestic market (+32%). 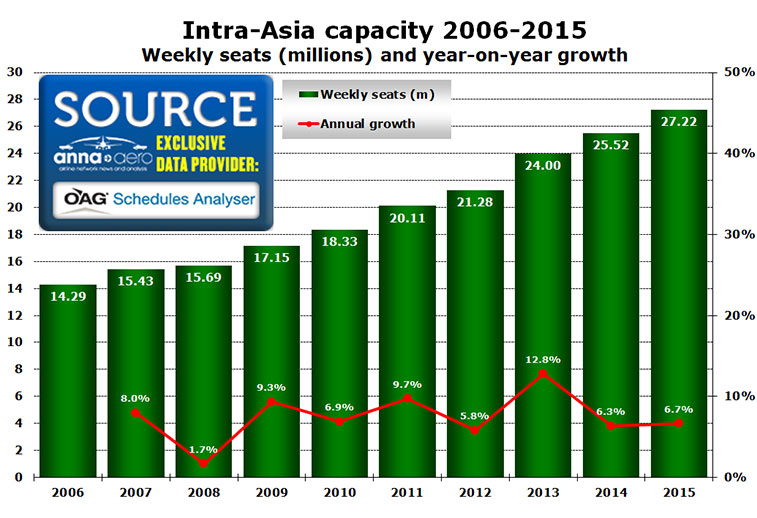 Source: OAG Schedules Analyser for w/c 6 October in each year.

According to OAG’s Schedules Analyser there are 409 domestic or international country pairs across the whole of Asia in October 2015. This represents a reduction of six versus the same week last year, when 415 country pairs were available in the intra-Asia market. Over the last ten years, the peak of this metric was in 2013, when 420 country pairs were on offer, this having risen from the 363 pairs which were provided in 2006.

The trends being experienced by the top two markets – China’s and Japan’s respective domestic markets – over the last five years could not be more different. China’s domestic market size progress has been more than dynamic, growing each year on average by 8.8%, and stands poised to break the one million weekly seat barrier over the coming months. Of all seats in the intra-Asia market, it commands over 36% of all capacity, up slightly from where it was five years ago with around 35%. Back in 2010, the #1 market was just less than three times bigger than the #2, this October it is very nearly four times larger than its nearest rival. 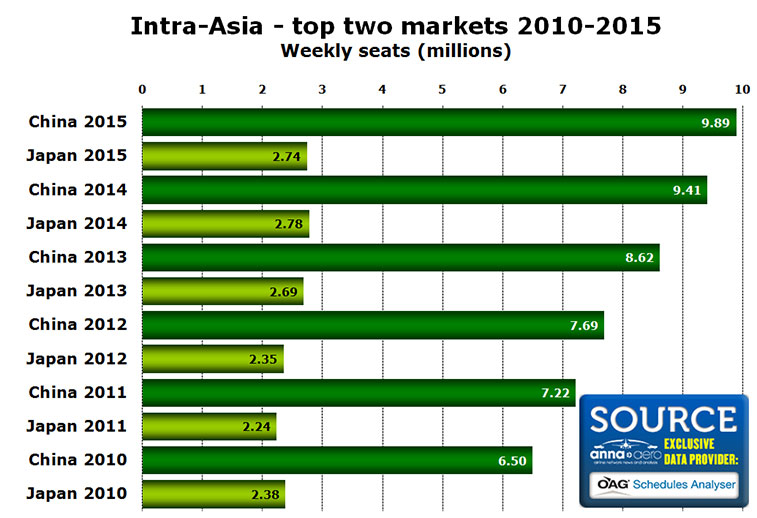 Source: OAG Schedules Analyser for w/c 6 October for each year.

Over the last year, capacity growth between Thailand and China, as exemplified by this week’s Thai AirAsia X launch between Bangkok Don Mueang and Shanghai Pudong, has outpaced that experienced by any other of the top 12 country pairs, with a 56% annual increase. While Japan’s domestic market performance is lacklustre, in the international arena it is far from sluggish, with Japan-China (+39%) and Japan-Hong Kong (+31%) both posting some impressive growth statistics. 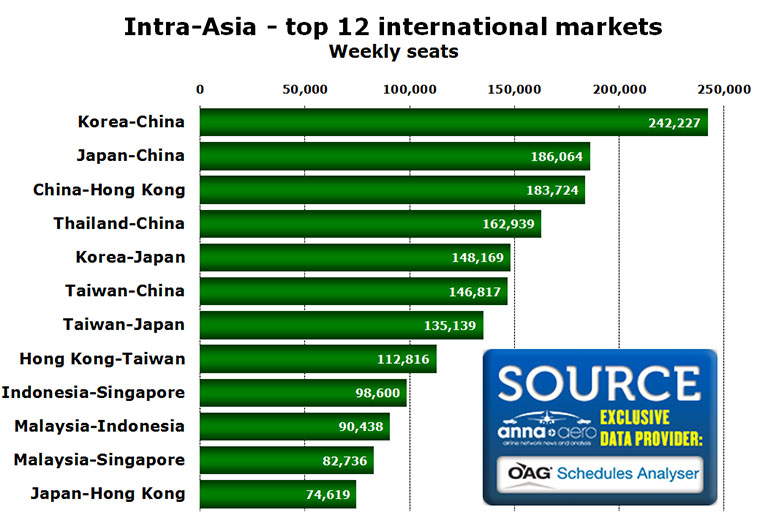 Not making the grade is the #10 market pairing of Malaysia to Indonesia, which has slumped by 10% year-on-year in terms of weekly seats. The 6.4% fall in Hong Kong to Taiwan capacity can perhaps be partially explained by the 1.3% hike in Taiwan to China capacity, as passengers progressively switch to direct services between China and Taiwan, rather than hubbing through Hong Kong. A 2.4% decline in the weekly seats available between China and Hong Kong was also noted in the last 12 months. Clearly, with all this capacity activity going on, there will be much to discuss in Singapore next month. 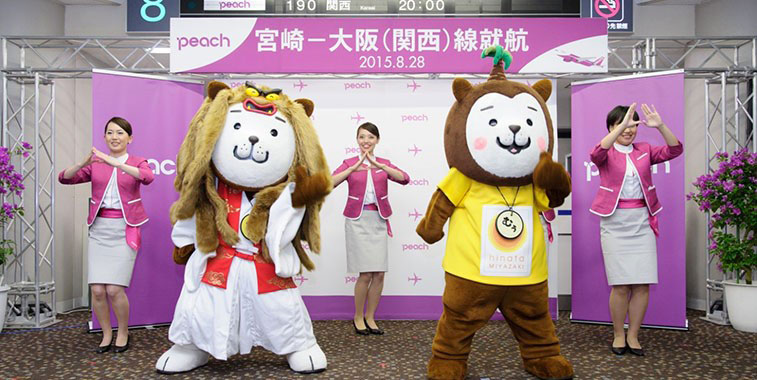 Peach Aviation on 28 August launched daily domestic flights between Osaka Kansai and Miyazaki on the island of Kyushu, using its A320s. While the Japanese domestic market maintains its spot as the second largest intra-Asia market, its 1.1% capacity decline in weekly seats and the Indonesian domestic market’s capacity growth of 5.4% has seen the gap between the two narrow in the last 12 months.