Turkish Airlines’ Kotil: “10 times more opportunity in Africa than in the rest of the world…like heaven in 20 years” 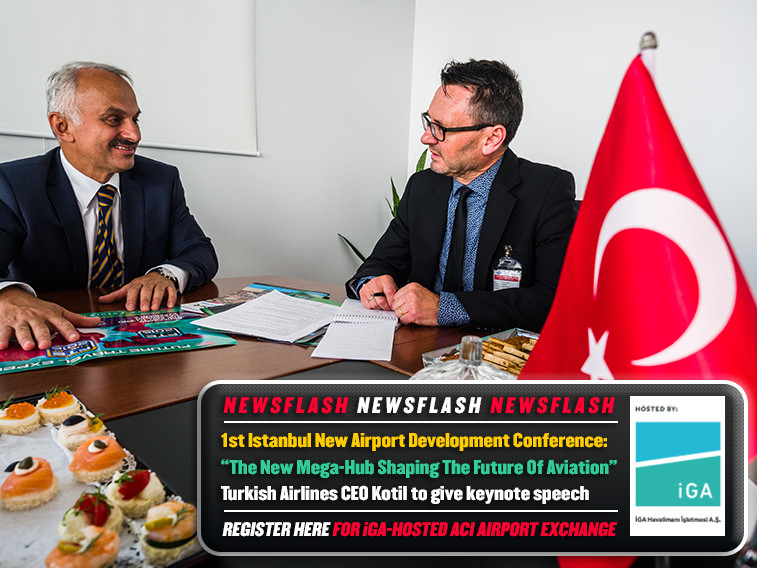 The interview with the Dr Temel Kotil, Turkish Airlines’ General Manager and CEO. The anna.aero publisher, Paul Hogan, took a whole bunch of questions with him, but Africa was pretty much all Dr Kotil (left) wanted to talk about (and we never did get to eat those cakes). Photo: Gregory Dziedzic.

Turkish Airlines’ interest in Africa shows no sign of maturing. This week’s anna.aero analysis demonstrates that the barnstorming Star Alliance carrier is leading the charge into the continent with seat growth of 32% in the last two years, by just announcing its 45th African destination (to Durban, appropriately unveiled at World Routes in Durban), and with its CEO telling us he is hungry for more in this interview: “There is 10 times more opportunity in Africa than in the rest of the world.”

Why is Turkish Airlines preoccupied with Africa?

Just like Emirates, Turkish Airlines obviously needs feed from Africa and everywhere else for its emerging mega-hub in Istanbul which is projected to reach 62 million passengers in 2015 (and which we think will overtake Frankfurt by next year, and Heathrow around 2020, shortly after the new airport opens). But Turkish Airlines’ huge presence in Africa is not just about feed, in fact it has a much bigger driver – much bigger than the forces driving Emirates, and bigger and more joined-up than Air France can muster…

The grand design ‘Turkey Inc.’ has is to embrace Africa as a full-on partner. The Turkish Foreign Ministry puts it nicely: “As an Afro-Eurasian state, Turkey’s opening up to Africa is not just the reflection of a transient political and economic expectation, it is the product of a process with strong historical and cultural aspects.”

Therefore the headline expansion of Turkish Airlines literally carries the Turkish flag to its new African interests along with other stark indicators: Five years ago there were only 12 Turkish Embassies in African countries, most of them in ‘traditional’ North African partner countries. Now there are 40 gleaming embassies in African capitals – and guess where the new Turkish Airlines routes are going to?! Business is flowing as a result: African O&D visitors to Turkey have risen more than five-fold in 10 years to a likely one million this year. Meanwhile bilateral trade is approaching $25 billion, a 10-fold increase since 2000 – Turkey hopes to add a big raft of airport projects to that trade flow (see below).

In his interview in a meeting room at Istanbul Sabiha Gökçen Airport, Dr Kotil glows with enthusiasm about Africa: “We have spent 10 years in Africa already, there are 1.2 billion consumers there, they might be poor states, but they are still states, many of them receive flights from Turkish Airlines, making them accessible, enriching them further, they have a growing middle class, a few rich people – there’s gold…and diamonds…and very tasty fish in Mogadishu.” Once again the Turkish Airlines CEO is backed by his own government’s estimates which predict that Africa will be a combined $30 trillion economy in 2050, or larger than the current combined GDP of the US and Eurozone. 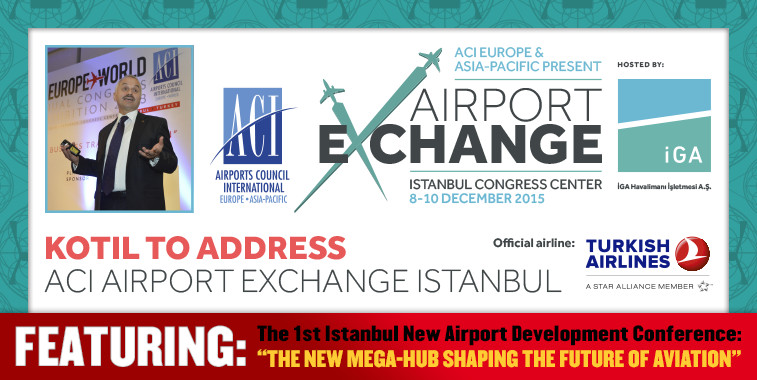 “Anybody serving Africa has a good profit – and we’re going there with the big numbers, we’re grabbing the market, yields are two or three times higher than in Europe on every single flight, sometimes traffic may be tiny, but the profit is high. As the market grows this will change, yield is going to halve, but in 20 years is going to be like heaven.”

While Turkish Airlines has the most routes – it does not have the most seats – as Emirates and others persist in using widebody aircraft, Turkish Airlines sticks to using its famed single-aisle hub-feeding strategy which works so well in Europe. “We can reach Kinshasa with a 737-900 – Emirates needs 200 passengers to break even, whereas we can do this if we have 100 lovely customers: We’re doing the better mathematics,” says Kotil with a mischievous, but cheerful grin.

In an anna.aero analysis of the leading airlines operating flights from Africa to destinations outside of Africa, we looked at how capacity had changed over the last two years by comparing the first week of August 2015 to the same week of 2013. The top two carriers are the national flag-carriers of major countries in North Africa (Egypt and Morocco) which are well connected to Europe and, in the case of EGYPTAIR, also the Middle East. Third-ranked Emirates achieves its position by offering non-stop flights to Dubai from 17 different countries in Africa.

If this analysis were looking at ASKs (Available Seat Kilometres) rather than seats, Emirates would be the leading carrier by some considerable distance. However, fourth-ranked Air France serves destinations in 25 different African countries, while Turkish Airlines’ destinations are currently spread around 21 different countries in Africa. 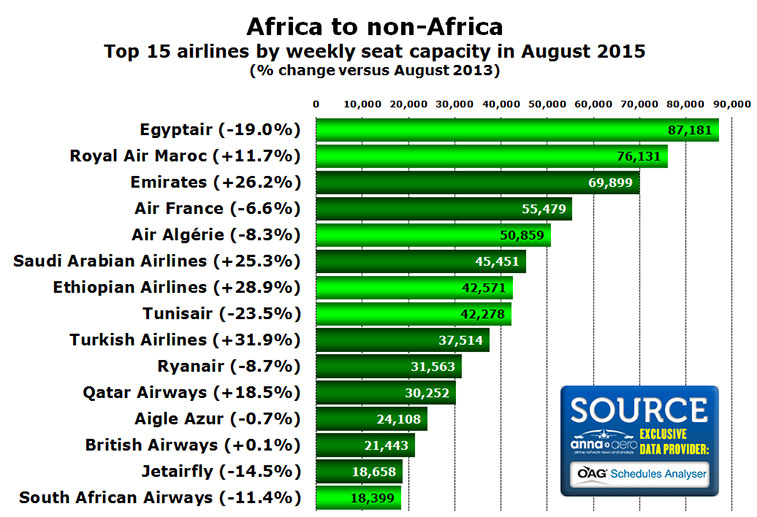 Among the top 15 airlines six are African carriers (shown in bright green), four of which have actually seen weekly capacity reductions compared with 2013, with only Ethiopian Airlines and Royal Air Maroc seeing capacity growth. Five of the top 15 carriers have seen capacity growth of over 15% since 2013, with Turkish Airlines leading the way (+31.9%), followed by Ethiopian Airlines (+28.9%), Emirates (+26.2%), Saudi Arabian Airlines (+25.3%) and Qatar Airways (+18.5%). Overall seat capacity on inter-continental flights to and from Africa has grown by just under 6% in the last two years. 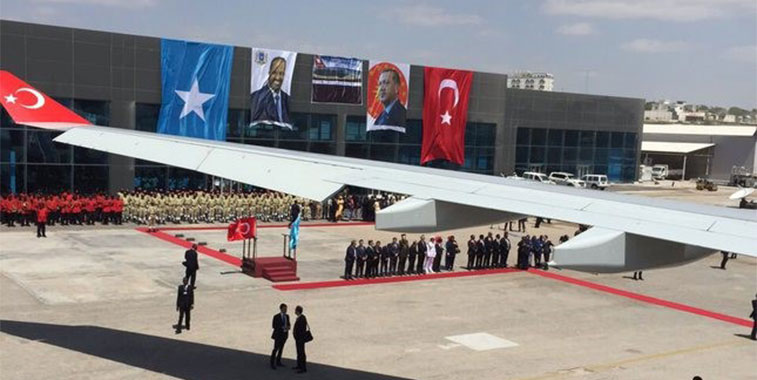 Turkish Airlines is not the only Turkish air transport grouping on an African adventure. If he gets his way, Serdar Hüseyin Yıldırım, the brand new boss of DHMI, the state airports organisation and the ultimate landlord of all Turkish airports, wants to build a lot of shiny new African airports. “They won’t have to pay a penny for these new airports” promises Yıldırım who says that the new infrastructure will be provided in a similar way to the new terminal for Mogadishu’s Aden Adde International Airport which was inaugurated by Turkey’s President Erdoğan in January.

In a further thrust for Turkish business in Africa, the DHMI boss envisages an airport export drive in partnership combining skilled Turkish construction companies, highly experienced commercial airport operators such as TAV Airports and Limak Airports, and by transplanting the Public-Private-Partnership model which has transformed Turkish airports since 2000, up to and including the soon-to-be system of eight runways serving Istanbul.

Dr Kotil isn’t concerned that his grand plan will be upset by all this new capacity provision in Istanbul: “We will welcome other airlines because they will help me, especially my lovely African routes, for every 100 passengers they bring I will get 50 customers from these lovely ‘other’ airlines who will fly on to Africa.”