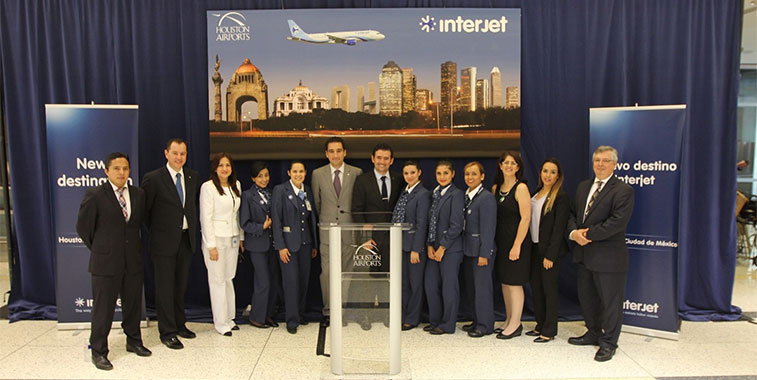 In May 2015 Interjet launched its second route to Houston Intercontinental Airport, this time from Mexico City. The Mexican LCC had launched service to the Texas gateway from Monterrey in October 2014. Houston is one of only five US cities currently served by the airline, along with Las Vegas, Miami, New York JFK and San Antonio.

In less than two months, Mexico’s Interjet will celebrate its 10th anniversary having begun operations on 1 December 2005 from Toluca Airport near Mexico City. Since then the carrier has become a major player in the domestic market and has, in the last five years, consistently accounted for between 22% and 27% of domestic passengers. Having first gained access to the country’s biggest airport in Mexico City in August 2008, the carrier was able to grow there significantly following the collapse in 2010 of Mexicana. Growth has slowed in recent years as the Mexican market matures. The fleet now comprises 39 150-seat A320s and 14 smaller 93-seat Sukhoi Superjet 100s, with further examples of the Russian-built aircraft due for delivery in the near future. anna.aero estimates that at some point around the end of November / beginning of December the airline will carry its 50 millionth domestic passenger. 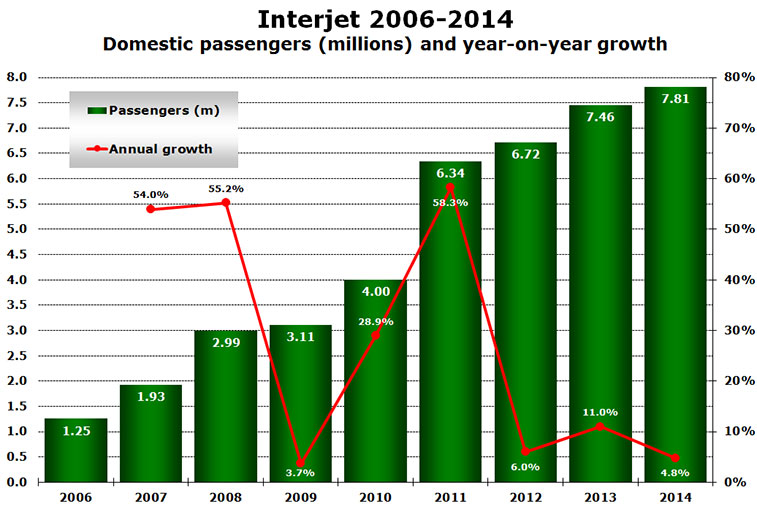 The Mexican domestic market is not too seasonal, with demand fairly evenly spread throughout the year, however with a noticeable peak in July. Interjet’s significant growth this summer is as much to do with improved load factors as it is with additional flights. According to the airline’s second quarter operating results, the average load factor jumped from 71.4% in 2014 to 79.8% in 2015, helping to generate a 22.5% increase in passengers despite ASKs (Available Seat Kilometres) increasing by only 13%. 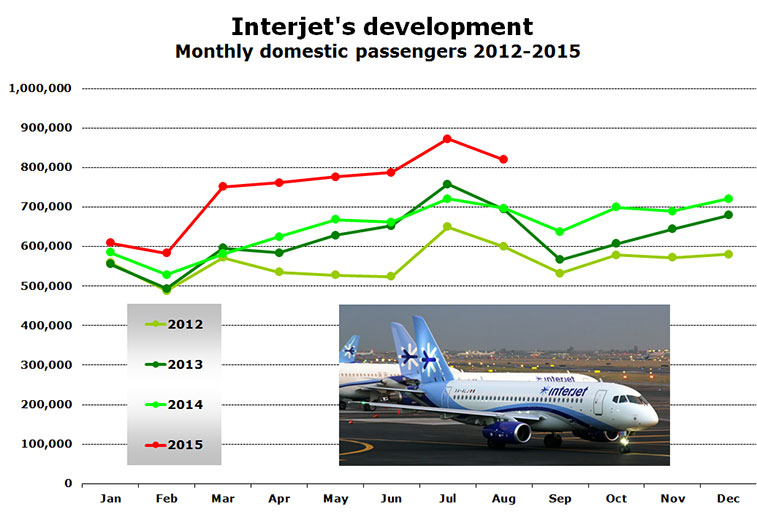 Once Interjet was able to gain access to Mexico City (in mid-August 2008) and following the demise of Mexicana, the airline has focussed the majority of its network growth at the airport. Out of the airline’s total network of 71 routes this winter, fully 43 touch Mexico City. The following graph shows the number of routes from each of the airline’s main airports during the first week of August since 2008. For 2015, this shows a total of 75 routes. However, some of these have been double-counted as they operate between the main airports. Between August 2014 and August 2015 Monterrey overtook Toluca to become the second best connected airport for Interjet, with direct services now up to 10 destinations. 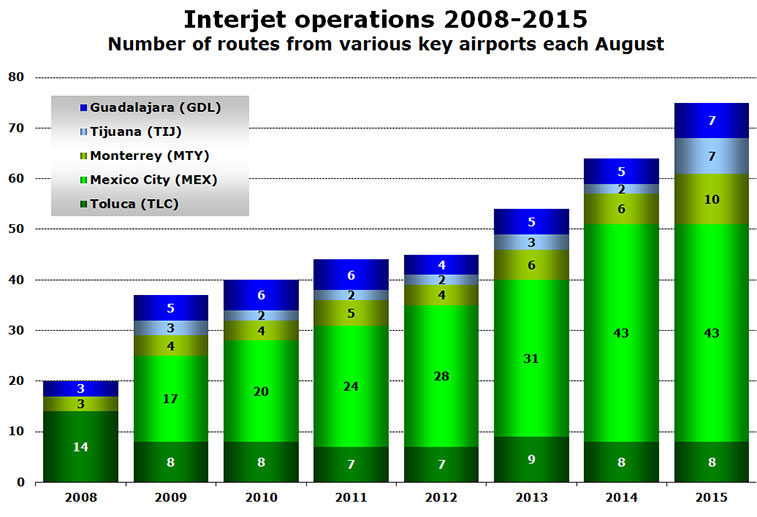 Source: OAG Schedules Analyser data for the first week of August in each year.

10 international destinations; five in US and two in Cuba

International services were launched as long ago as 2007 (to Guatemala), but this winter Interjet will still fly to just 10 international destinations; five in the US (Houston Intercontinental, Las Vegas, Miami, New York JFK and San Antonio), two in Cuba (Havana and Varadero), as well as Guatemala City, San Jose in Costa Rica and Bogota in Colombia. The airline’s two newest routes, scheduled to start on 15 October, are a new twice-weekly service from Mexico City to Varadero in Cuba, and a four times weekly service from Monterrey to Havana. Interjet started serving Havana from Mexico City in August 2011 while Cancún-Havana services launched in July 2015.