Singapore Changi Airport set to pass 55 million mark in 2015; Singapore Airlines group of carriers still account for over 50% of seats 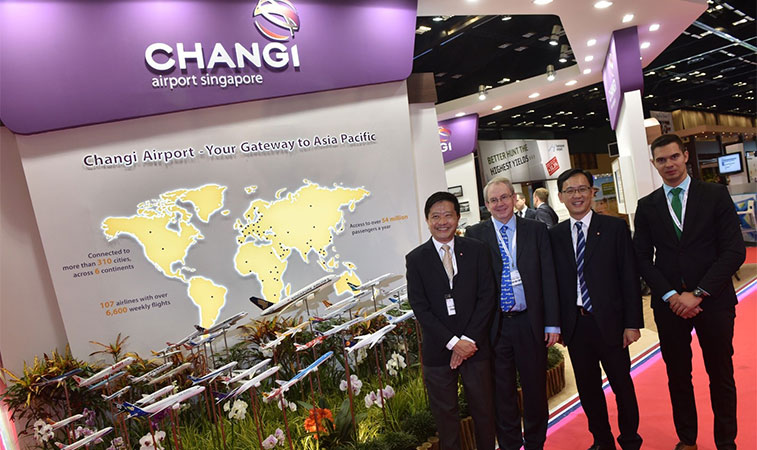 anna.aero’s Ralph Anker and Vlad Cristescu met with members of the Singapore Changi Airport marketing team at World Routes in Durban recently. The airport now handles more than 100 airlines (including cargo carriers), some of which were represented in the fantastic model aircraft display that the airport presented on its stand.

Despite handling a record 54.1 million passengers in 2014, Singapore Changi Airport fell from 13th to 16th in the global rankings of busiest airports. With passenger numbers up less than 1% last year the airport was overtaken by Istanbul Atatürk Airport, Amsterdam Airport Schiphol and Guangzhou Baiyun International Airport, which all grew more quickly. Between 1999 and 2013 demand doubled at Changi from just over 26 million annual passengers to almost 54 million. This period also included 2003 when the regional SARS crisis impacted travel demand and a modest downturn in 2009 as a result of the global recession. 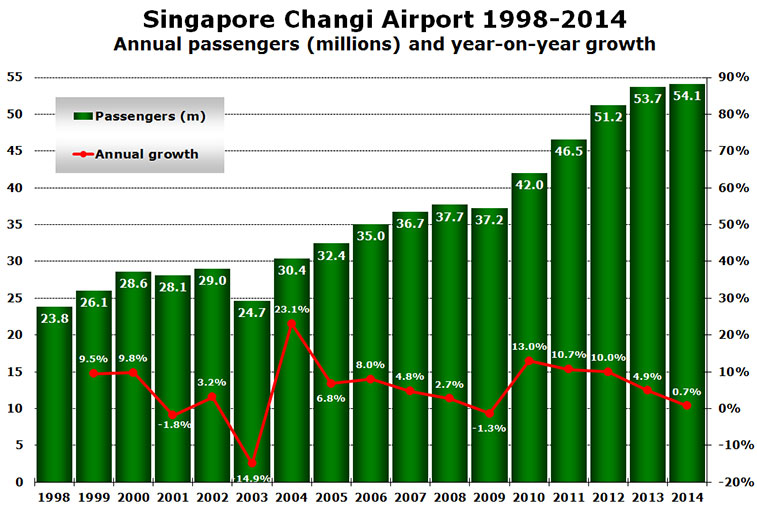 In the first eight months of 2015 passenger numbers are up a marginal 1.8%, though July and August both saw faster growth of between 6% and 7%, helped by the country’s Golden Jubilee celebrations. The airport’s relatively flat seasonality profile results in it having a SVID score of just 0.33 (“excellent”) for 2014, one of the lowest ever recorded in our analyses of airport statistics.

As one of the world’s busiest airports, Changi has a constant stream of arriving and departing flights during most of the day. Analysis of the number of scheduled departure and arrivals on Monday 12 October shows that during 19 hours of the day there are more than 30 total movements per hour (arrivals and departures combined), with 14 of those hours witnessing more than 40 aircraft movements. The busiest hour is between 17:00 and 17:59 with 55 movements followed closely by 15:00 to 15:59 with 54 movements. Only between 03:00 and 05:00 does it get really quiet at the airport. 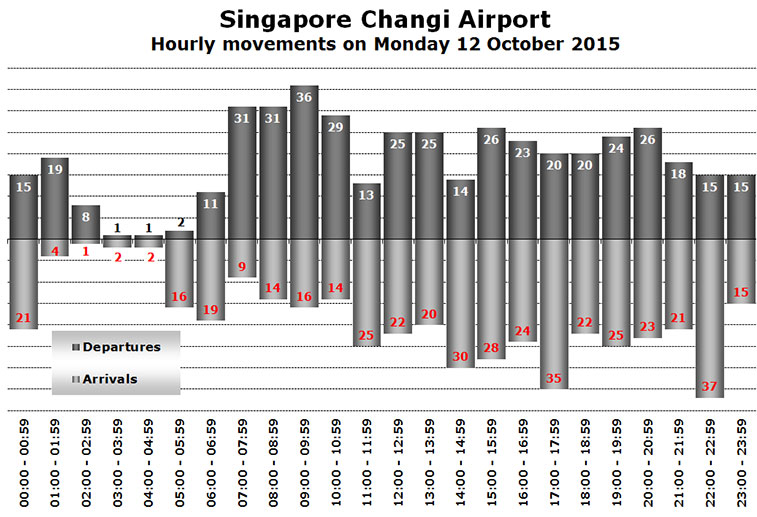 The airport is dominated by Singapore Airlines and its subsidiary airlines, which include Tigerair Singapore, SilkAir and Scoot. Between them these four carriers currently account for around 51% of weekly seat capacity. Among the top 12 airlines just three have reduced weekly seat capacity since last October, namely Tigerair Singapore, Cathay Pacific Airways and Indonesia AirAsia. The fastest-growing airline is Jetstar Asia which has seen capacity growth of almost 30%. This has been achieved in part thanks to the four new Indonesian services that the airline launched at the start of the W14/15 season to Denpasar, Jakarta, Medan and Surabaya. 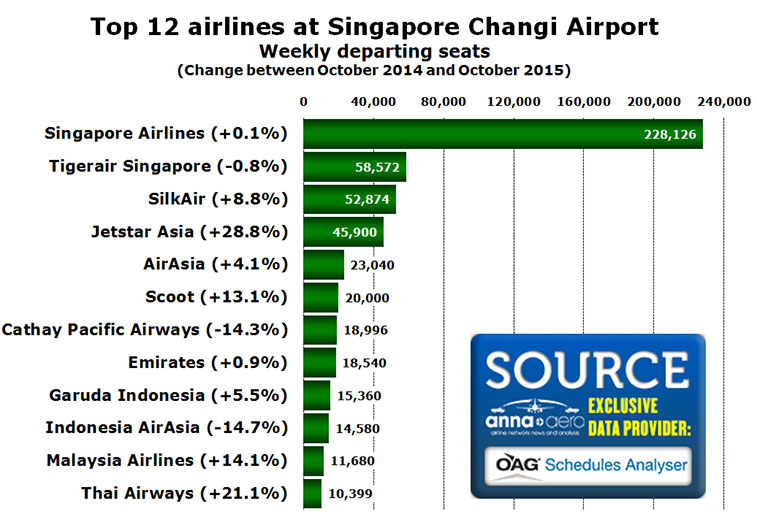 According to OAG Schedules Analyser data, a total of 66 airlines currently offer scheduled passenger flights at the airport. This includes newcomers Batik Air, Myanmar National Airlines, Oman Air and Thai Lion Air who all launched their first flights to Singapore during 2015.

If segmented by country market, Indonesia remains the leading destination for flights from Changi in terms of seat capacity. However, seat capacity to Indonesia is down compared with a year ago, while second and third ranked Malaysia and Thailand have both seen double-digit growth. The only other double-digit percentage change among the top 15 country markets is a 12% increase in seat capacity to Taiwan. A total of 40 country markets are served by non-stop services from the airport, the same as in October 2014. Among the least well-connected countries are Spain (Singapore Airlines serves Barcelona with thrice-weekly flights), Uzbekistan (Tashkent is served weekly by Uzbekistan Airways) and Bhutan (Paro is served weekly by Druk Air). 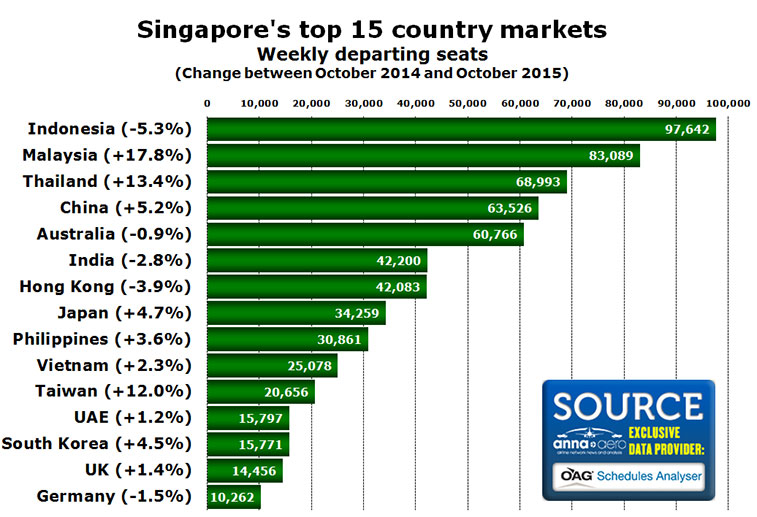 Between now and the end of the year the airport will welcome several new services including a number of new destinations. Tigerair Singapore is launching flights to Lucknow, its sixth destination in India on 3 December, while Jetstar Asia is adding three new destinations to its network: Palembang from 29 October; Pekanbaru from 5 November; and Danang in Vietnam from 27 November. These destinations are already served by other airlines, but these are the first low-cost airline services to these cities. Other new services starting soon include Malindo Air to Penang (25 October), Scoot to Hangzhou (25 October) and Melbourne (1 November), and Thai AirAsia to Utapao (27 November). 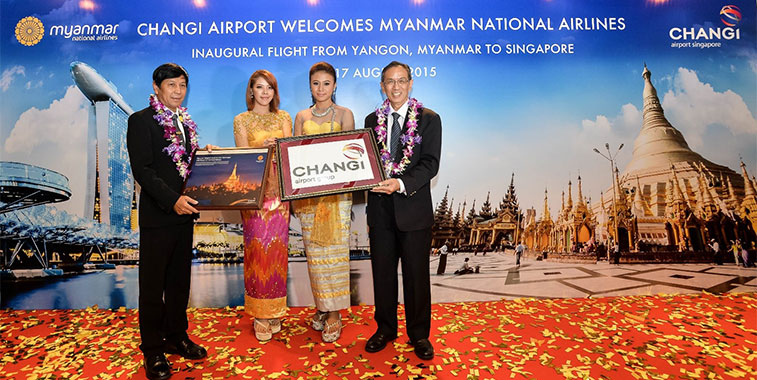 On 17 August Singapore Changi Airport welcomed a new carrier to the airport with the first flight of Myanmar National Airlines from Yangon. The six times weekly service will compete for passengers with services offered by Jetstar Asia, Myanmar Airways International, SilkAir, Singapore Airlines and Tigerair Singapore.