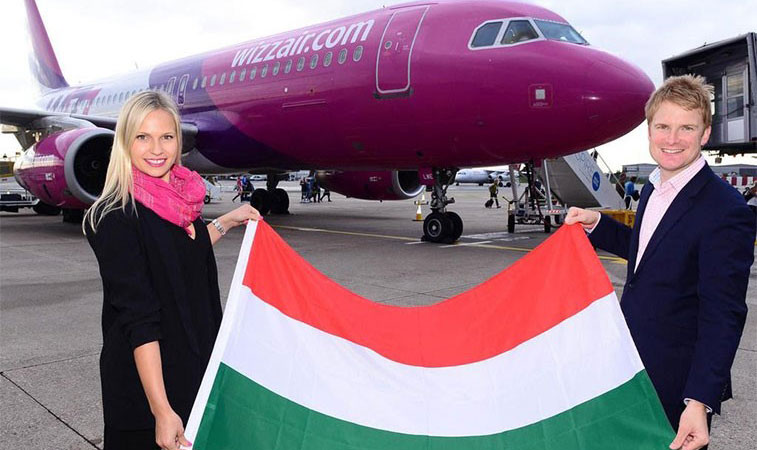 Wizz Air recently commenced services between Budapest and Birmingham, the second destination for the carrier from the UK’s second city. From December, the airline will add its third route to Birmingham from Poznan in Poland, and a fourth from Bucharest on 22 May 2016, increasing its market share in the east-west European market.

The east-west European market grew by 5.5% when compared to the same corresponding month of last year. Just to clarify where the split in Europe occurs for this analysis (according to OAG data): the west (or EU1) includes the FIGUS countries (France, Italy, Germany, UK and Spain), as well as Austria and Turkey; and the east (EU2) being countries like the Czech Republic, Russia, Romania, Poland, Latvia etc.

This summer nearly six million monthly seats have been made available in the east-west market, with Wizz Air controlling nearly one million of these (around 17%). An analysis by EUROCONTORL last year indicated that the average annual flight growth between 2013-2020 would be higher in Eastern Europe than it would be in Western Europe by approximately 2%-6%, depending on the state. The only country in Western Europe to go against this trend is Turkey, where traffic is expected to grow at an average of above 6%. 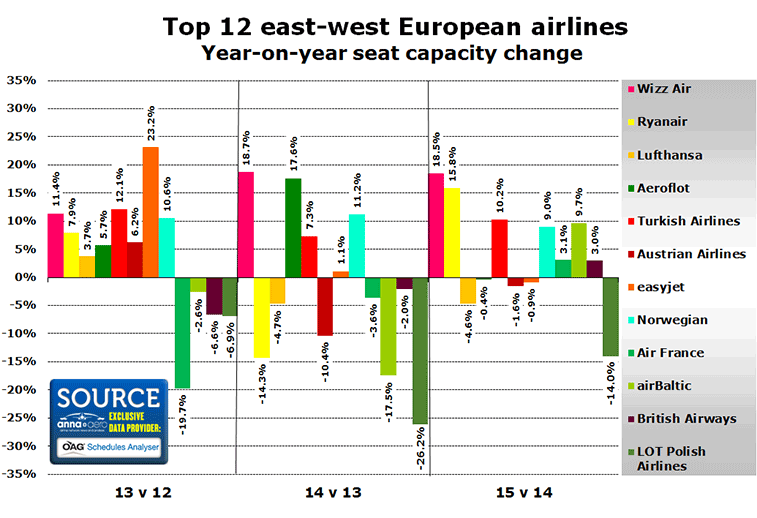 Over the past three years, Wizz Air has grown seat capacity between Eastern and Western Europe on average by just over 16% per annum. The result meant that in 2014, the airline overtook its main ULCC rival in the market, Ryanair, to gain the number one position. Coincidentally, Ryanair has also shown growth within the same time period, however between October 2013 and October 2014 it recorded a 14% decline in capacity based on data from OAG Schedules Analyser. Nonetheless, although Wizz Air is the number one carrier in the market ahead of Ryanair, it is not number one in all Eastern European countries. As an example, a recent analysis by anna.aero found that Ryanair was in fact now the number one carrier in Poland, ahead of its main market rival Wizz Air.

So far in 2015, Wizz Air has opened 70 new routes, of which a majority connect Eastern and Western Europe. These launches also included the airline’s first services to Aberdeen, Belfast International, Billund, Birmingham, Bristol, Friedrichshafen, Reykjavik/Keflavik, Molde, and Niš. In relation to full-service carriers, it is Turkish Airlines which is growing the most, with an average annual growth over the past three years of 9.9% to Eastern Europe. One airline which has seen a reverse in its trends is airBaltic, which has recorded a growth in seat capacity over the past 12 months of 9.7%, helped by the introduction of based operations from Vilnius, and further expansion from Riga.

Within the space of three years, easyJet has gone from being the fastest growing airline in the market during 2013 to recording a decline of 0.9% this year. One reason for this may possibly be the increased competition between Wizz Air and Ryanair battle at the top. Another factor contributing to the fall in seat capacity from the orange LCC is the airline’s decision to leave the Russian market. Last October, the London Gatwick to Moscow Domodedovo service was the number one route for the carrier in its east-west European market, with services operating up to twice-daily. However this October, the route is the ninth largest, seeing a decline in capacity of 55%, and from March 2016, the route will be pulled altogether. The decision for easyJet to leave the market is apparently in response to the significant and sustained reduction in demand for travel between Moscow and London in recent months, which has been driven by a number of factors, including the weakness of the Russian economy together with the tightening of the visa approval process. Services from the Russian capital to Manchester will end on 22 October.

One UK carrier which is considering taking up easyJet’s licence to operate to Russia is Virgin Atlantic Airways. Richard Branson, the airline’s founder, recently spoke in an interview by saying: “We are actually looking at possibly trying to fly to Moscow at the moment because easyJet has just announced it is to stop flying there, so we are actually thinking about maybe taking their license and flying to Moscow. So that’s possible.” The airline did compete with easyJet back in 2012/13 to take up the highly sought after slots when they became available. 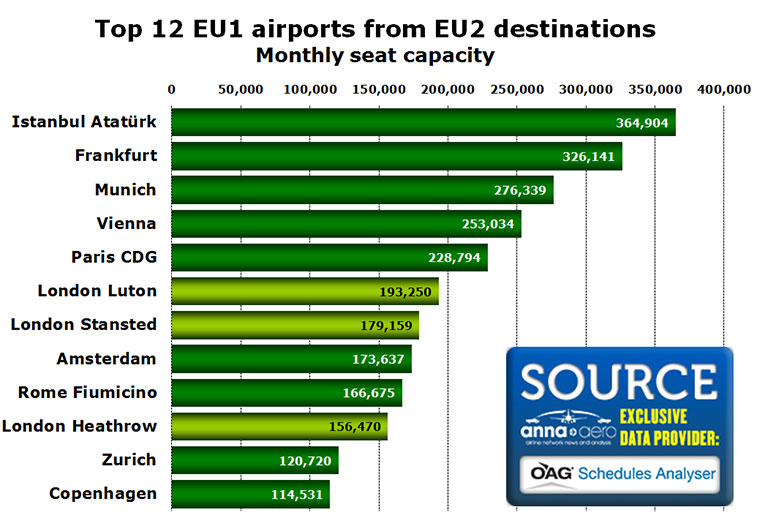 After recording a growth in capacity of nearly 11% when compared to the same time period of last year, Istanbul Atatürk has overtaken Frankfurt to become the number one destination from EU2 airports in relation to seat capacity, while the latter airport has seen a decline of 3.4%. However, when we take into account all airports within a city market, London, which has three of its airports in the top 12 (highlighted in light green), becomes the number one destination, with the UK capital having 31% more capacity than Istanbul. The London market is served by four airports from Eastern Europe (Heathrow, Gatwick, Luton and Stansted), whereas Istanbul is served by two (Atatürk and Sabiha Gökçen). Within the top 12, it is Luton that has performed the best, recording a growth in seat capacity to Eastern Europe of just over 15%. This is followed by Zurich which has seen just under 15% growth in that market. 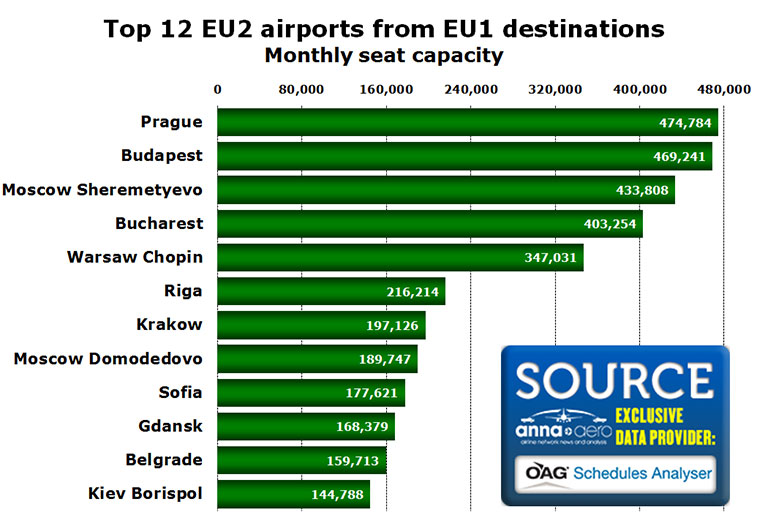 After recording a growth in the market of 9.2% when compared to the same time period of 2014, Prague remains the number one destination in Eastern Europe in relation to seat capacity from Western Europe. Domodedovo however has seen the biggest decline in seat capacity, with numbers down 26% when compared to last year, with easyJet’s reduction in capacity being one of the contributing factor to this decline.

Despite Prague being number one, the destination which has seen the biggest growth in seat capacity in the top 12 is Budapest, which has seen a rise of nearly 12% when compared to last year, resulting in the airport overtaking Moscow Sheremetyevo. The Hungarian capital has seen Ryanair gain ground on the airport’s number one ULCC Wizz Air, as recently analysed by anna.aero. Wizz Air has an additional seven routes operating from the airport this summer when compared to 2014, with Birmingham being the latest addition on 15 September.

anna.aero’s New Route Database shows that there are 19 planned route launches for the remainder of October between Eastern and Western Europe, with the number one and two carriers in the market, Wizz Air and Ryanair, launching 13 of the 19 between them (68%). The routes and launch dates are broken down in detail below. 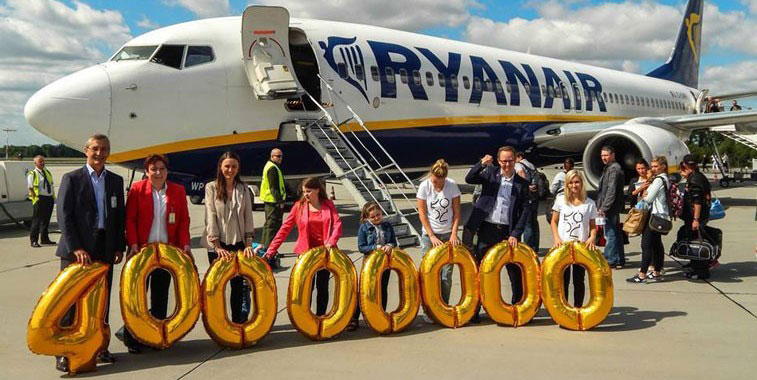 A recent analysis by anna.aero revealed that Ryanair had become the number one carrier in Poland, one of the airline’s key Eastern European markets. It has also recently celebrated carrying 40 million passengers from the country since it first commenced operations to Poland. However since this analysis, Wizz Air has added three new routes from Poland to the UK, the country’s number one market in Western Europe, meaning the ULCC is closing the gap on Ryanair on this country pair, and gaining further growth in its lead in the Eastern-Western European market.