Agadir Airport passenger traffic is down 4.4% for the first six months of 2015; Casablanca still #1 route 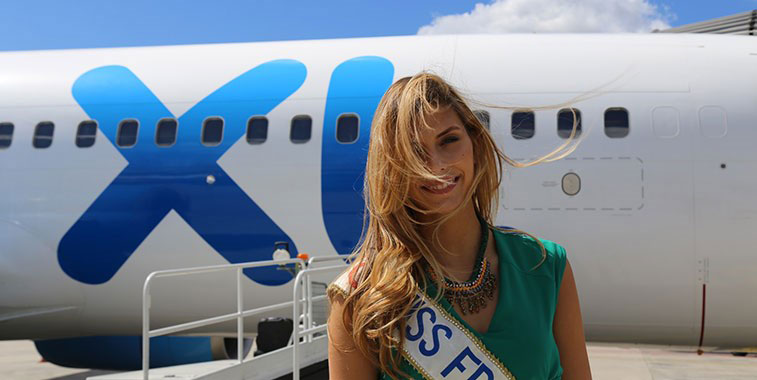 Miss France 2015, Camille Cerf, was on hand at Lille Airport on 25 April when XL Airways France commenced services to Agadir, along with another seven destinations. For October 2015, Lille is the 13th most popular route in terms of seat capacity. However, according to OAG, it has witnessed a decrease in seat capacity of nearly 11% as a result of Thomas Cook Airlines Belgium no longer serving the route.

Agadir is Morocco’s premier destination for sun, sand, pubs and pizza according to Lonely Plant. The resort’s main type of foreign visitor is the package-tour holidaymaker, with the destination having less of an appeal to independent travellers with an interest in Moroccan culture. This comes as no surprise to anna.aero, as an analysis of Agadir Airport shows that six of the top 12 airlines have or have had a majority of their flight programmes made up of charter flights in the not too distant past, focusing on package holidays. Nonetheless, Agadir is most certainly not a seasonal airport with no fluctuations between winter and summer as its SVID score demonstrates further below. 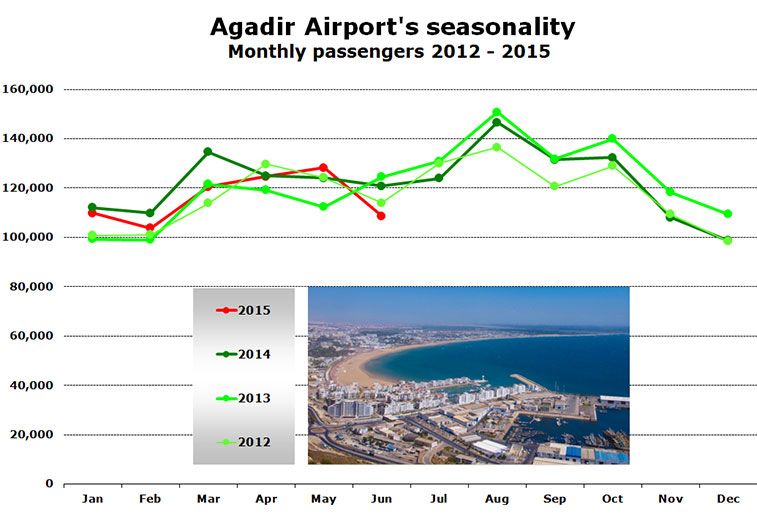 An analysis of passenger traffic at Agadir confirms that for the first six months of 2015, it is down 4.4% when compared to the same time period of the year previous. Of the six months, the worst performing was June, which was down nearly 12%. It is interesting to note however that during this period, May reported its best performance over the past four years with a growth of 3.3%. Nonetheless, if the downward trend of 4.4% continues for the remainder of the summer months and into the winter season, Agadir Airport should expect to see passenger levels remain just above 1.4 million for 2015.

Entering Agadir’s monthly passenger data for 2014 into anna.aero’s Seasonal Variation in Demand (SVID) calculator, the airport performs well, generating a score of 1.31 ‒ an ‘excellent’ rating. The airport’s seasonality performance has improved marginally when compared to the result achieved in 2013, when it attained a score of 1.79. Evaluating Agadir alongside the most significant competing Moroccan airports, our data elves also ran SVID calculations on Marrakech (1.63 – ‘excellent’) and Casablanca (2.64 – ‘good’). 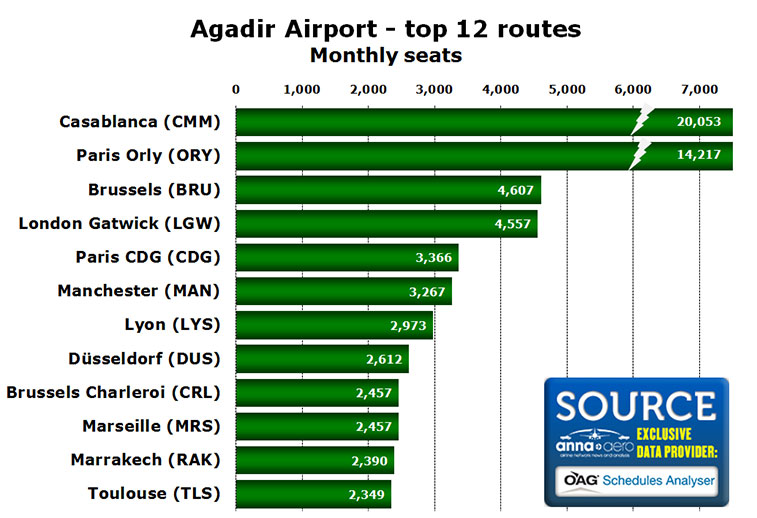 With seat capacity growth of nearly 40% when compared to the same time period of last year, Condor is the fastest growing airline from Agadir, resulting in the carrier overtaking Thomson Airways and Transavia.com France to become the fifth largest airline from the Moroccan facility. Coincidentally Transavia.com France is reporting growth when compared to October 2014 of 1.2%, helped by the launch of services to Lille in April. However, Thomson Airways is reporting a decline in capacity of nearly 28%. The British carrier however may reverse its decreasing seat availability when it introduces services to Birmingham on 2 May 2016 according to anna.aero’s New Routes Database. Ryanair and easyJet have both increased capacity from Agadir, with the Irish airline reporting a growth in seats of 30%, while the Orange LCC is showing a rise of 29%. Outside of the top 12, the number one carrier for growth is Aer Lingus, which has seen its services to Dublin grow by 20%. Royal Air Maroc remains the number one airline from Agadir, with the Moroccan national carrier reporting a 5.0% growth in seats when compared to last year. 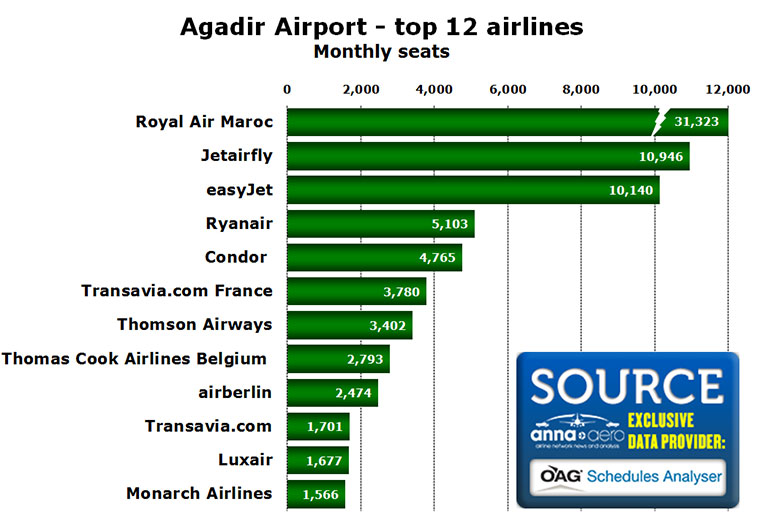 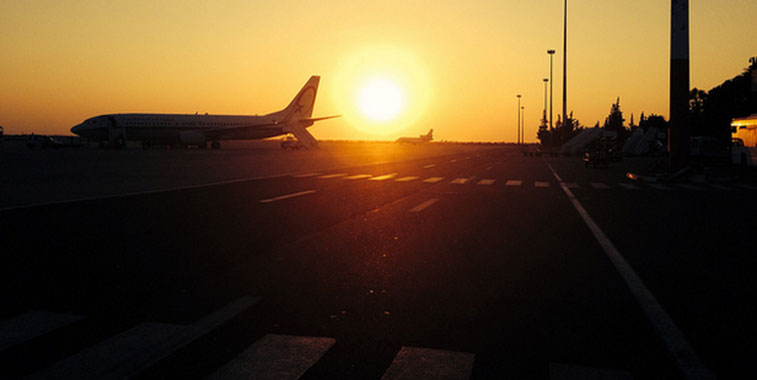 Sat on the tarmac at Agadir Airport is a Royal Air Maroc 737-800. This summer, the airline has recorded growth in capacity of 5% from the airport when compared to last year according to OAG Schedules Analyser data.