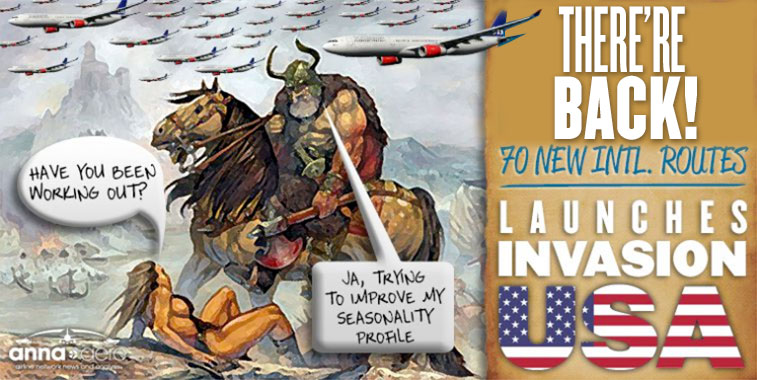 And you thought Volvos were boring: After almost going bust in 2012, a resurgent SAS has launched or resumed 90 routes (80 net) including 70 international services since 2011, meaning routes flown have risen +55% from 150 to 230.

Operating on the far north of Europe, and obliged for political reasons to operate three separate hubs within 600 kilometres of each other, SAS is by most measures one of Europe’s top 10 airlines, carrying over 27 million passengers in 2014. However, the Star Alliance carrier has struggled financially in recent years and came very close to collapse in late 2012. Since then things have improved, thanks to a major cost-cutting programme and the fortuitous fall in the price of fuel, so much so that the carrier has even reported a positive 3% operating margin for its most recent 12-month accounting period (to July 2015).

As the national carrier for all three Scandinavian countries (Denmark, Norway and Sweden) SAS’ three biggest bases are also the capital cities of those countries. The next busiest airports (Bergen and Stavanger) are both in Norway, helping to make it the airline’s leading country market for weekly seat capacity, ahead of Denmark, Sweden, UK, Germany and Spain. The leading non-Scandinavian airports (shown in bright green) are led by London Heathrow in sixth place. 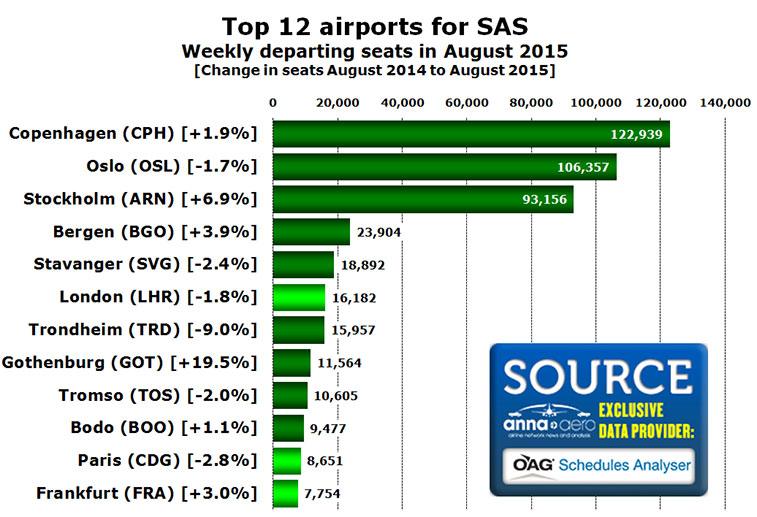 Capacity changes at the airline’s top dozen airports has been within plus or minus 5% with the exception of Trondheim (down 9%), Stockholm Arlanda (up nearly 7%), and Gothenburg (up almost 20%). SAS’ growth in Gothenburg may be related to the benefits of competition from Ryanair which has moved to the bigger airport, and upgraded it to a designated base, following the closure of the city’s downtown airport to commercial services. Dublin features among SAS’ recent route launches…definitely a challenge to Ryanair!

Analysis of monthly ASKs (Available Seat Kilometres) at the airline’s three main bases shows that on the whole the airline has continued to add capacity to its network. In 2015, Stockholm has seen an 8% increase in its annual ASKs compared with 2014, while both Copenhagen and Oslo have seen very small reductions. In 2014 the opposite had been true, with Copenhagen and Oslo both growing faster than Stockholm. 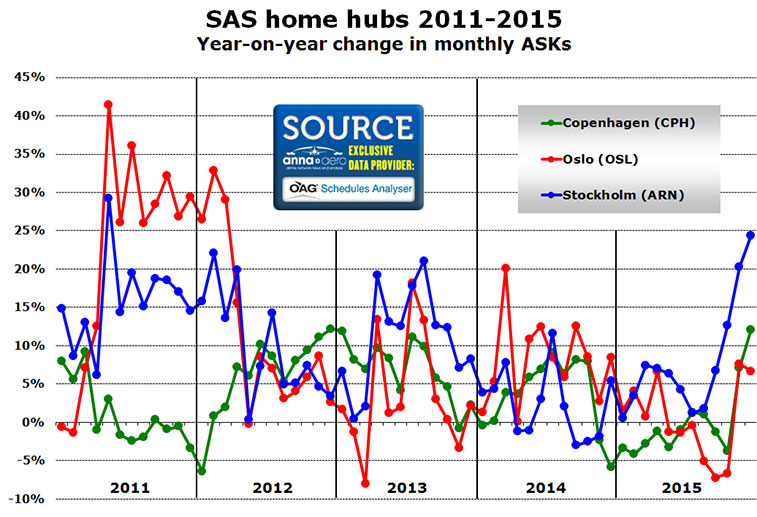 What this graph fails to illustrate is the increase in routes offered by SAS from its main bases. According to anna.aero analysis of OAG schedule data between August 2011 and August 2015, SAS grew the number of airports served from 87 to 109, while increasing the number of routes flown from around 150 to over 230. SAS’ most recent quarterly presentation highlights this in a different way, pointing out that between July 2011 and July 2015 the airline increased the number of international routes (to outside Scandinavia) by 62%, from 112 to 181. Across the same period aircraft utilisation improved by 29%.

Stockholm’s sudden ASK growth towards the end of 2015 can partly be explained by the launch in September of a new long-haul, wide-body service to Hong Kong using the airline’s latest A330s.

While most European airlines and airports see a peak in demand during the main summer months of July and August, the Scandinavian market is somewhat different. With a typically higher proportion of business traffic during most of the year, demand actually falls away during the summer holiday period of July and August even though that is typically when Scandinavians (like their Northern European colleagues in the UK and Germany) head south for guaranteed sunshine. 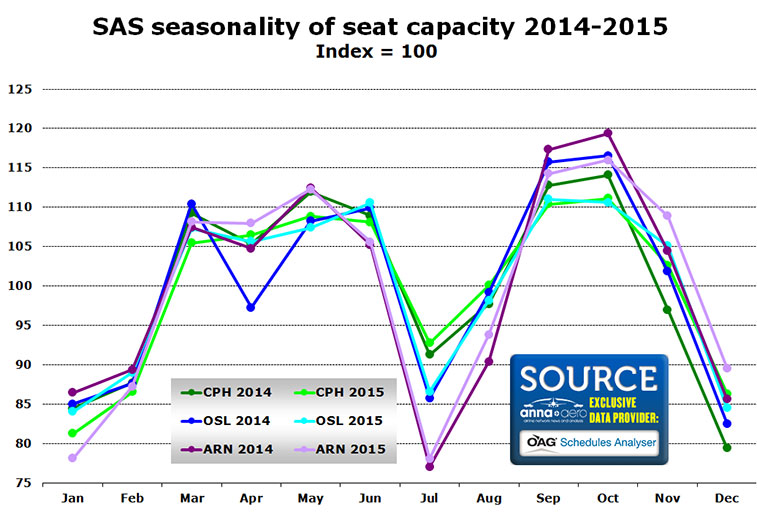 Dealing with seasonality is a major issue faced by most airlines and applying anna.aero’s SVID (Seasonal Variation in Demand) formula, which we normally apply to airports, to SAS’ monthly seat capacity for the last two years reveals that the carrier has managed to reduce seasonality at its Copenhagen and Oslo bases, but not in Stockholm.

US expansion driven by Norwegian threat?

Long-haul flying is set to grow in 2016 with the commencement of a new daily Stockholm to Los Angeles service starting in March, followed by new services to Miami from both Copenhagen and Oslo starting in autumn 2016. In addition there are increased frequencies this winter on routes to Chicago, New York, San Francisco and Shanghai. However, the service operated on the airline’s behalf by Privatair between the oil cities of Stavanger and Houston, will end in a couple of weeks at the end of the summer season. Instead the 737-700 will be re-configured from a 44-seat all-business class layout to a two-class 86-seat layout (with 20 business class seats and 66 economy seats) and will be used to start a new daily service between Copenhagen and Boston from the end of March 2016. Coincidentally, or not, this is a route that Norwegian plans to start operating with its 787-8s next May. Between the end of October and next March the aircraft will be used to provide some of the capacity on SAS’s existing Copenhagen-Newark service. 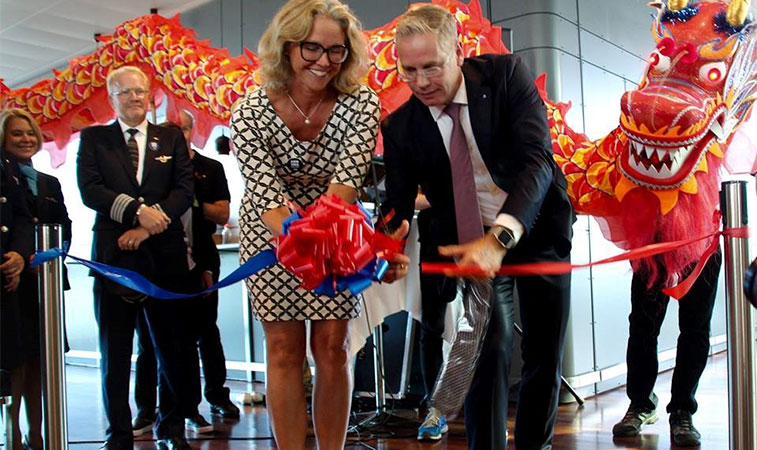 SAS is planning several new long-haul services to the US in 2016 but its most recent long-haul route launch was from Stockholm Arlanda to Hong Kong, which began operating on 10 September. The 8,203-kilometre route, operated by the airline’s wide-body fleet has helped to increase the ASKs offered by SAS out of Stockholm this winter by up to 20%.

Analysing OAG schedule data for the first week of August in both 2011 and 2015 reveals that SAS operates over 90 routes this summer that it did not four years ago. However, it has also dropped around a dozen routes that it did serve in August 2011, including four routes to Madrid, Bergen to London Gatwick and Copenhagen services to Lyon. Some of these new services operate at low frequency for just a few weeks during the peaks summer holiday season.

Further route expansion for this winter includes the launch of Brussels and Paris CDG flights from Gothenburg, plus the re-allocation of Gothenburg-London Heathrow flights to London Stansted. There will also be a new service from Oslo to Vilnius. Apart from the new long-haul services previously mentioned, next summer will see the addition of new services from Stockholm to Munich and from Copenhagen to Faro, Krakow, Reykjavik/Keflavik and Vienna. SAS has greatly expanded its route network from Gothenburg this year, including new routes at the start of the summer season to Bergen, Dublin and Lulea. We suspect the same local baker was responsible for all three of these great looking cakes to celebrate the start of operations.