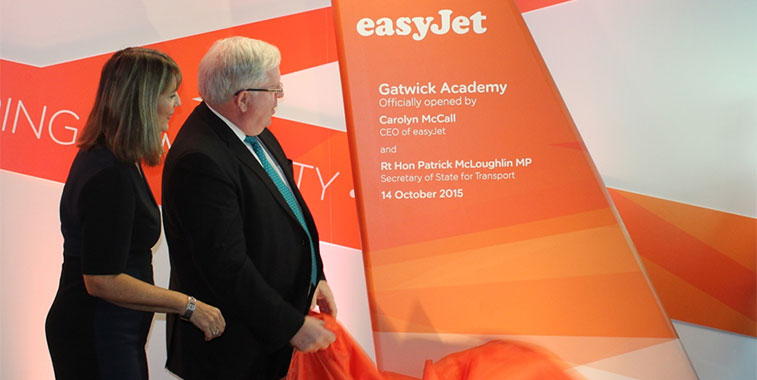 On Wednesday 14 October, easyJet CEO, Carolyn McCall, and the Rt. Hon Patrick McLoughlin MP, Secretary of State for Transport in the UK, officially opened the company’s brand new crew training facility at London Gatwick. The new Academy, a £2.7 million investment by easyJet, has been built to accommodate easyJet’s continued growth and houses a world-class training facility comprising classrooms, cabin simulator, evacuation slide and fire training rig. The Academy is located within Concorde House at London Gatwick and will train easyJet pilots and crew from bases across Europe.

Commenting at the opening of the new facility, McCall addressed the media by saying: “Along with this base opening, we are also announcing that easyJet will recruit 1,140 crew over the next year with a split of approximately 830 cabin crew and 310 pilots. This is really fantastic news for us today, as I believe that the strength of our staff correlates to the strength and growth of easyJet, so by employing over 1,000 new people, it confirms that the airline will also grow in strength.”

The new facility will not be dedicated to just UK crew, but will bring together new recruits from all over Europe. Not only will new crew be trained at this facility, but over 6,000 crew per year will undergo annual recurrent training. 60% of this training will take place at Gatwick, with the remaining 40% taking place at London Luton.

While also commenting on the announcement of new jobs, McCall highlighted the fact that she wants to increase the ratio of female pilots at easyJet: “Currently only 7% of our pilots are women, and in two years easyJet is targeting to grow this figure to 14%, and we believe that this is realistically achievable. Along with our training partners, we already offer 10 cadet places each year for women who want to become pilots, and we also want to promote the STEM subjects (Science, Technology, Engineering and Maths) to younger women to show that it is a fantastic career opportunity and not just a male role.” 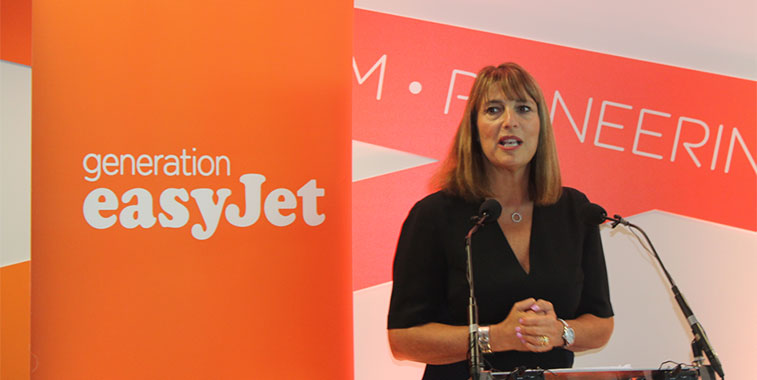 Commenting about easyJet’s growth over the past 20 years, McLoughlin stated: “The whole story of easyJet is immensely impressive. The UK as an island is reliant on air links and we need a vibrant aviation industry, which easyJet has contributed to immensely.” Also commenting on the move of easyJet’s to recruit more women, he commented: “I am personally proud of easyJet for their move to recruit more female pilots. I’m also impressed that they have managed to open this fantastic facility on time and on budget. They’re more than welcome to come work for me.”

During the quick Q&A session which was offered after the press conference, Simon Calder, one of the UK’s leading travel journalists, asked McLoughlin about his thoughts of the Howard Davis report findings, to which he replied: “I have read the report and the UK Government is still planning on making an announcement by Christmas. I could tell you what I think today, but I won’t. However, we do need to improve aviation capacity, and the UK needs a capacity refresh.” 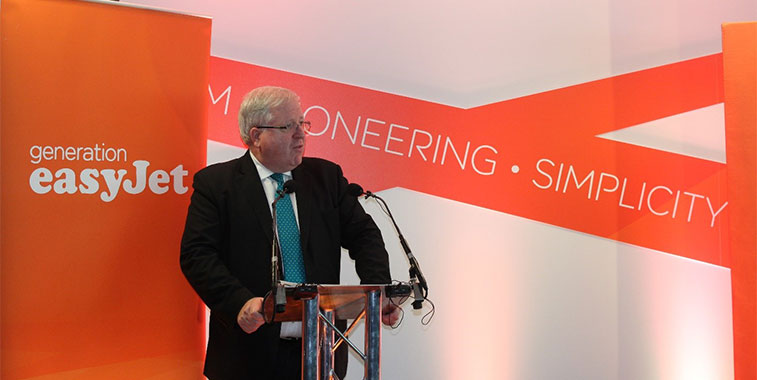 Patrick McLoughlin highlighted in the press conference that he was proud of easyJet in its move to recruit for female pilots, and also how he finds the story of easyJet to be immensely impressive. 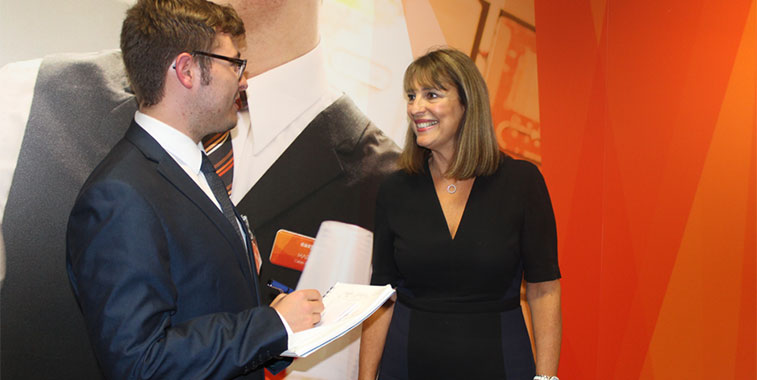 “So Carolyn, its really nice to meet you and as it’s the first time I have met you so I feel I need my first question to be very serious…so here it is…..what flavoured cake would you like for easyJet’s 20th birthday celebration?”

After the unveiling of the new crew facility, anna.aero’s Jonathan Ford got a chance to introduce himself to McCall, and was fortunate enough to spend some time with her to get an update on easyJet’s future operations and of course the most important topic…Cake!

anna.aero: “So Carolyn, my first ever question to you is very serious…as you know, anna.aero is making a special birthday cake for the airline’s 20th birthday…so…what flavoured cake would you like for easyJet’s 20th birthday celebration?”

Carolyn McCall: “Oh well the answer to that one has to be chocolate, with some orange icing on top with a theme celebrating easyJet’s 20 years of flying.”

aa: “So the airline recently announced that it was to open a new base in Venice. Where else in Europe is easyJet hoping to open bases next year?”

aa: “So easyJet has a very strong brand in Europe, and the airline is well established in many European markets, where is easyJet looking to expand to next on the continent?”

CM: “As you know, easyJet has been flying for 20 years, and even in established markets where we have operated since the beginning we still see room for growth. I always give Switzerland as an example, even at this moment we see demand from Switzerland even after 20 years, and we will continue to expand. Places such as the UK and Switzerland will still see around 4% growth year-on-year for the foreseeable future. Recently we have seen rapid expansion in France, Netherlands and Italy, growth from these nations will be much higher than the UK and Switzerland. This is how we see growth at easyJet, not just in specific areas but across all of our network.”

aa: “So there you have mentioned growth will be seen across all of the European market where easyJet has a strong presence. Taking today as an example with this investment at your Gatwick base. How will growth be distributed around the UK?”

CM: “Well this year has been the strongest summer ever for easyJet in the UK, and it is a crucial market in our network. Of course a majority of our flying is from London, however we will be growing in a majority of the regions outside of the capital for next summer.”

aa: “Recently Ryanair announced that Germany would be one of the key centres of growth on its network, how does easyJet feel about this and does the airline have plans for Germany expansion next year?”

CM: “We are not worried about Ryanair’s announcement. Currently we are the number one carrier at Berlin Schönefeld, easyJet has recently opened a new base in Hamburg, we now fly to Stuttgart from a number of UK destinations including from Gatwick and Edinburgh. From December we will also be introducing Friedrichshafen to our network from Gatwick. So yes Ryanair are growing, but so are we.”

aa: “Mentioning Ryanair, they have also recently announced that they have been talking to a number of airlines about acting as a feeder carrier for their long-haul networks – including Norwegian and Virgin Atlantic Airways right here at Gatwick. What is easyJet’s response to this?”

CM: “We have spoken to airlines in the past about this sort of agreement, including the two that you mention there. We do work with strategies such as GatwickConnects and a similar strategy at Milan Malpensa, however as an airline, we don’t want to do anything that will complicate our main strategy. For easyJet, efficiency is our number one aim, and we don’t want to complicate the point-to-point scheduled service which is what we are about. We will also not codeshare either with another carrier.”

aa: “We are starting to see LCCs such as Norwegian trying to enhance the customer experience by now having Wi-Fi across their fleet. Does easyJet have any plans in the pipeline like this to enhance passenger services?”

CM: “We will see Wi-Fi become the norm across air travel within the next 10 years, so I say yes eventually it will come. However until it is cheaper and more reliable, easyJet will not introduce it. Also easyJet’s average sector length time is only 1:10 hrs, and also from responses I have had from people, they like being switched off from the outside world for that period of time. So yes it will come eventually, but not until it is consistently good.” After the interview, anna.aero was invited to take a look around the new crew training facility and even take part in some of the emergency drills that over 7,000 easyJet crew need to take each year. Here, Jonathan Ford, anna.aero’s Assistant Editor tries out the emergency evacuation procedure. He can confirm that he landed on his feet, and even managed an Olympic gymnastics bounce as he vaulted off the end. Included in the facility is a state-of-the-art aircraft simulator, which is made up of three decommissioned Airbus A320 aircraft, with parts being brought together to create a mini cabin environment. Whilst there, some of the easyJet crew who were on hand that day demonstrated the emergency evacuation procedures during a fire, a decompression scenario, and a fire in the cabin. The crew at easyJet were absolutely fantastic at demonstrating the emergency procedures they would go through if anything did go wrong during flight, proving that they are so much more than just waiter and waitresses in the air. anna.aero would like to thank easyJet for inviting them along for a wonderful day at its new facility at Gatwick, and a personal thank you to Katie Kershaw, PR Manager, easyJet, who made it possible for Ford to experience what cabin crew go through during their intensive training, although he cannot pull off the oxygen mask look.